Religious Symbols and their Meanings 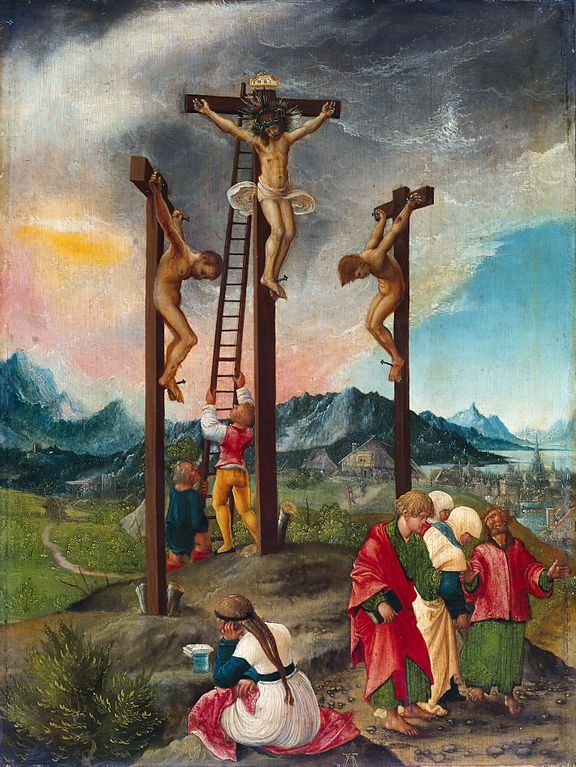 courtesy wiki
Christ on the Cross by Albrecht Altdorfer
Easter is a good time to show some of the religious symbols I came across hidden within the carved pews in the Chapel at Stanbrook Abbey. The symbols are all connected with what is liturgically known as 'Christ's Passion' as set out by the Roman Catholic Church.
I have long had an interest in signs and symbols found in art, and endeavour to understand and interpret their meaning. Some works of art carry hidden messages whilst others are more obvious. Two very good examples of paintings with hidden messages are The Ambassadors by Hans Holbein, and The Arnolfini Portrait by Jan van Eyck. 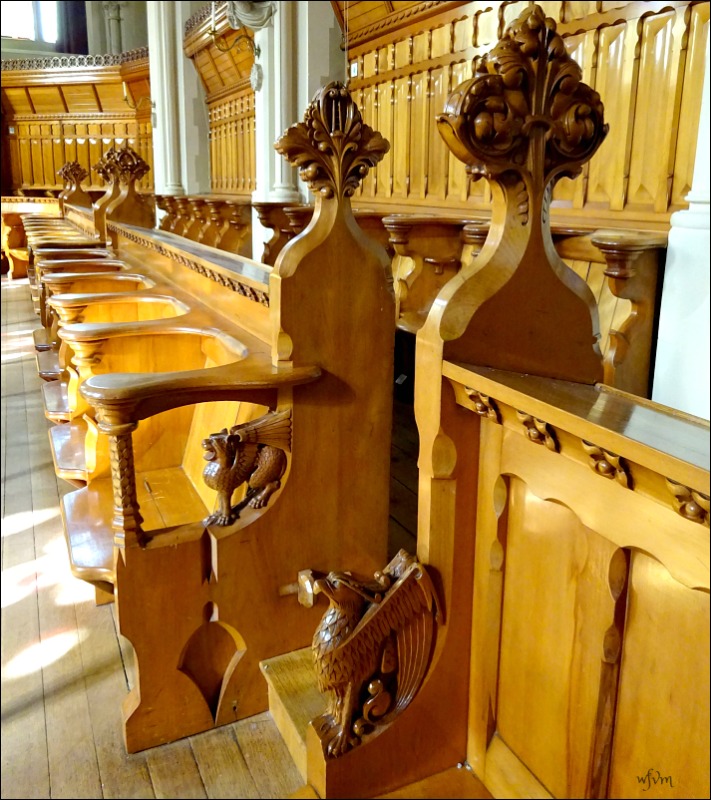 The pews at Stanbrook Abbey, which were used only by the nuns, are in an area of the chapel called 'The Choir'. They are carved with various exotic mythical beasts at their ends then topped with exuberant flourishes of acanthus leaves. 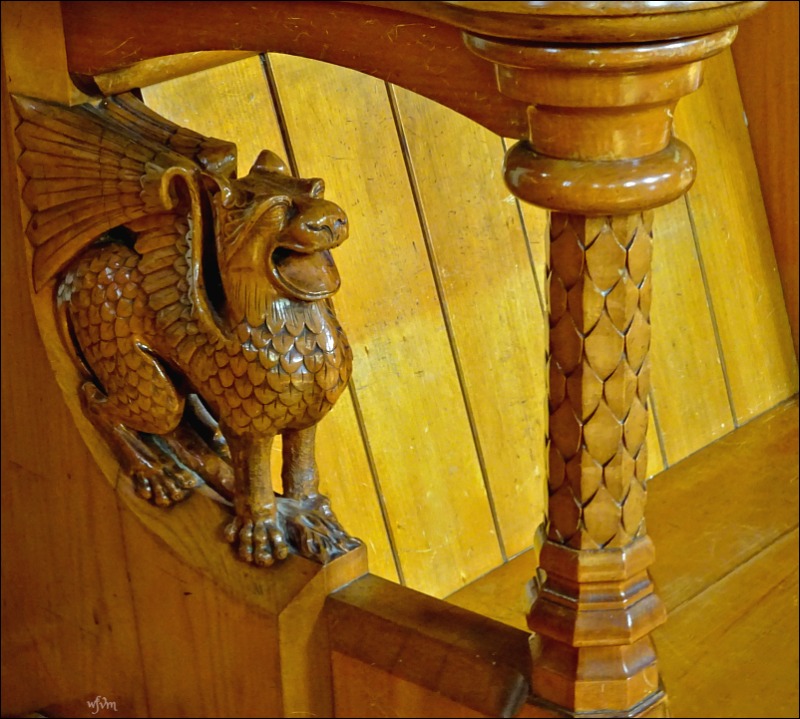 In Christianity mythical beasts can be representative of both the powers of good and evil, the virtues and vices of human nature, and the temptations into which humans fall. The acanthus leaves in Christianity represent pain, sin and punishment. Whilst I was admiring the acanthus leaves, I noticed that some had symbols hidden within the carving. 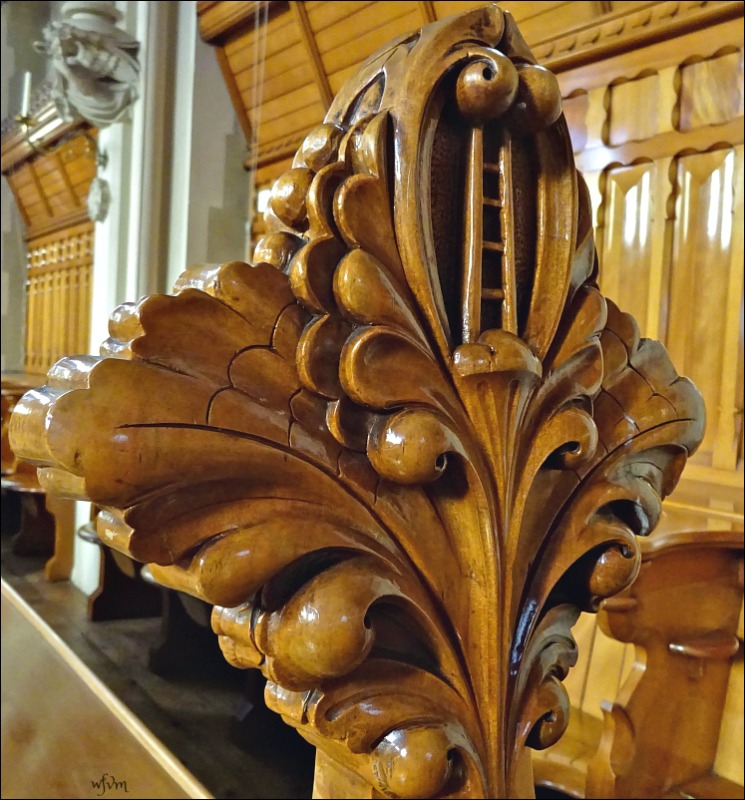 The ladder is one of the instruments connected with the Passion, and is often present in scenes showing the descent (deposition) of Christ from the cross after the crucifixion - as per the painting at the start of this post. 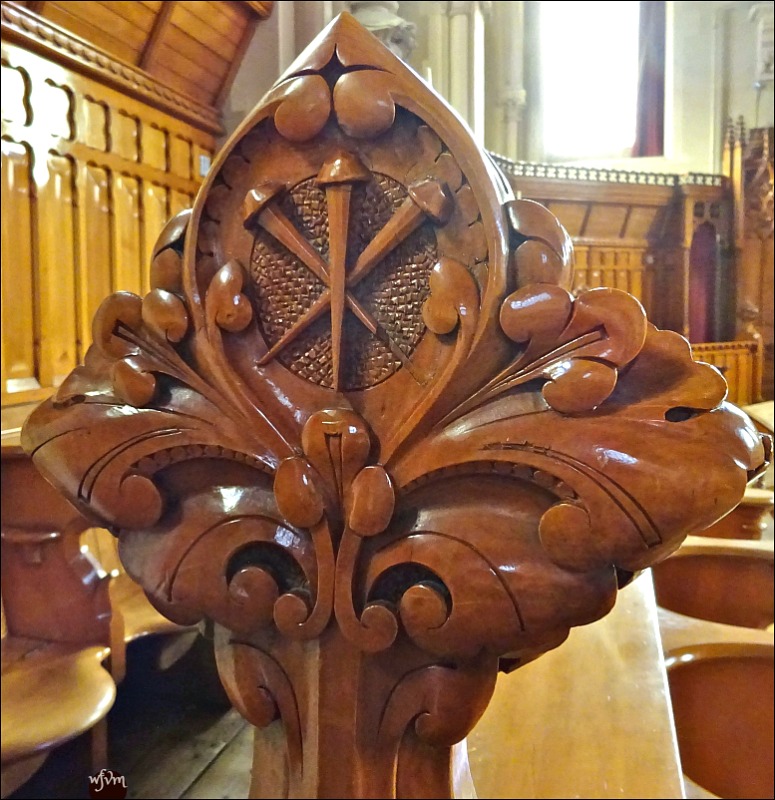 Three nails that held Christ on the cross - three being the Trinity. 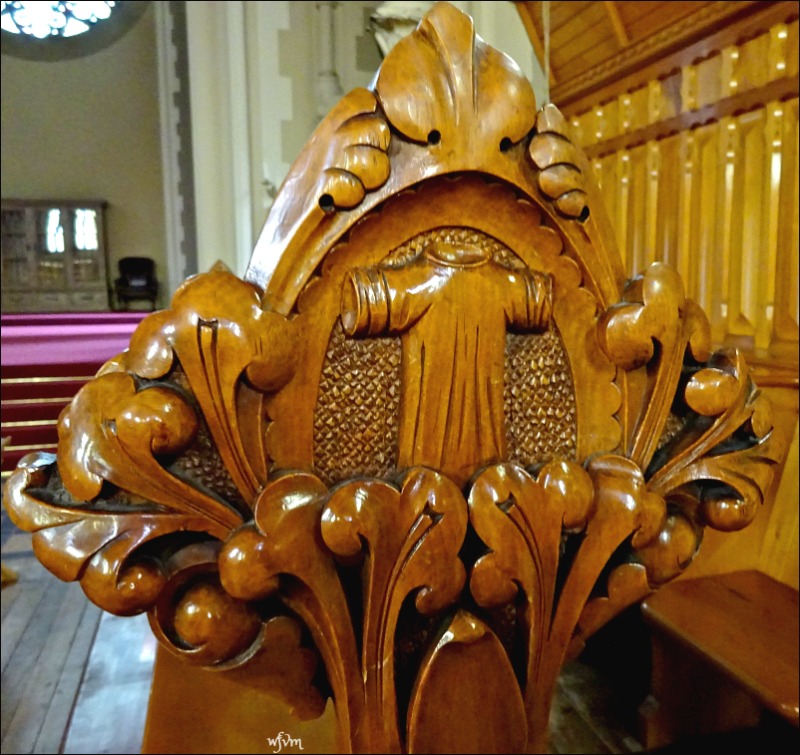 The seamless robe of Christ was said to have been worn shortly before the Crucifixion. According to medieval traditions the robe is now kept in Trier Cathedral, Germany. We visited the cathedral in 2012 and I wrote a post featuring the robe here. 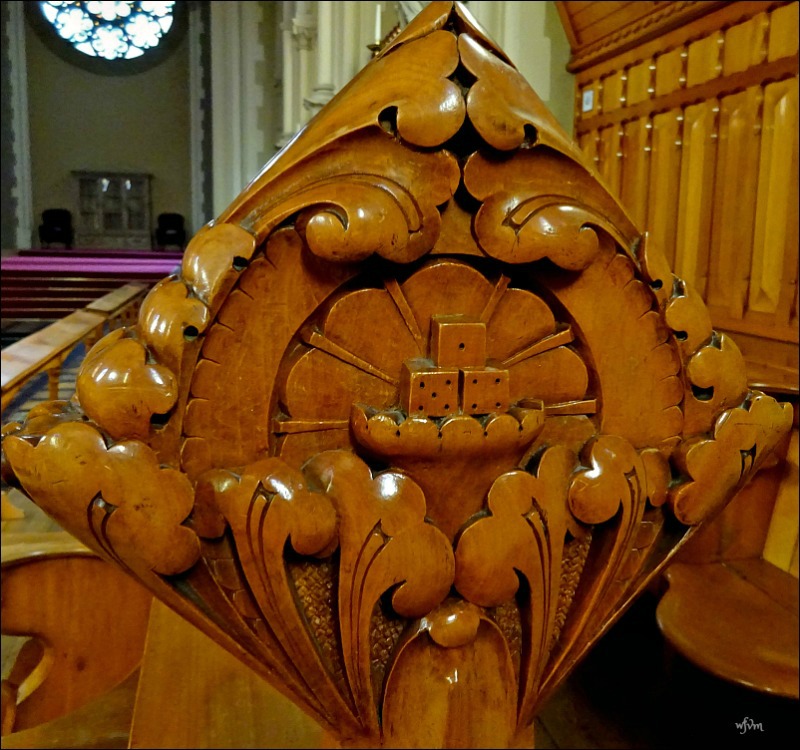 The dice represent the soldiers casting lots
"then the soldiers, took his tunic, but the tunic was seamless, woven in one piece from the top throughout, so they said to one another, let us not tear it, but let us cast lots to decide whose it should be" John.19, 23-24
The first dice showing 'one' has several meanings; oneness of nature in God; one divine person in Christ; one true Church founded by Christ; one mortal life, one baptism, one death, and after death one judgement before eternity.
The second dice showing 'five' recounts the five wounds - two in Christ's hands, two in his feet, and one in his side.
The last dice showing 'four' represents the four evangelists who wrote the Gospels; and the four cardinal virtues of prudence, justice, temperance, and fortitude.
I believe the object holding the dice represents a torch. A torch is one of the instruments of the Passion. Flaming torches were carried by the arresting Roman soldiers at the time of Christ's betrayal by Judas. The sun in the background is representative of the eclipse that occurred at the time of the Crucifixion. The crown of thorns.
"when they had platted a crown of thorns, they put it upon his head, and a reed in his right hand: and they bowed the knee and mocked him, saying Hail, King of the Jews!' Mark 15.17 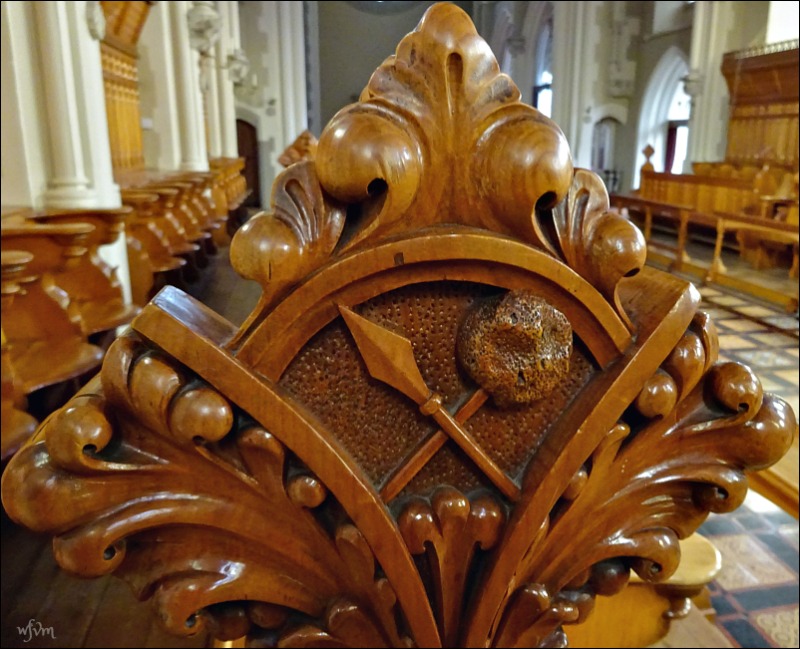 Lance and Sponge
The lance was used by a Roman soldier to inflict the last of the five wounds into Christ's side.
A reeded sponge soaked in gall (myrrh) and vinegar was offered to Christ to quench his thirst and dull his pain, but he refused. 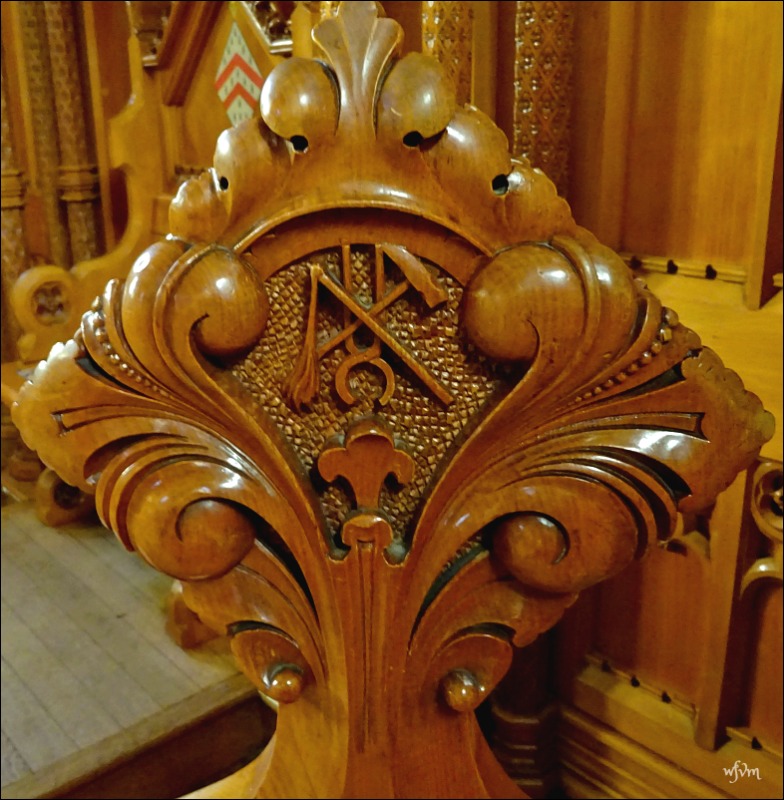 The whip used for the 39 lashes, the hammer drove the nails into Christ's hands and feet, and the pincers were used to remove the nails following the cruxifiction. 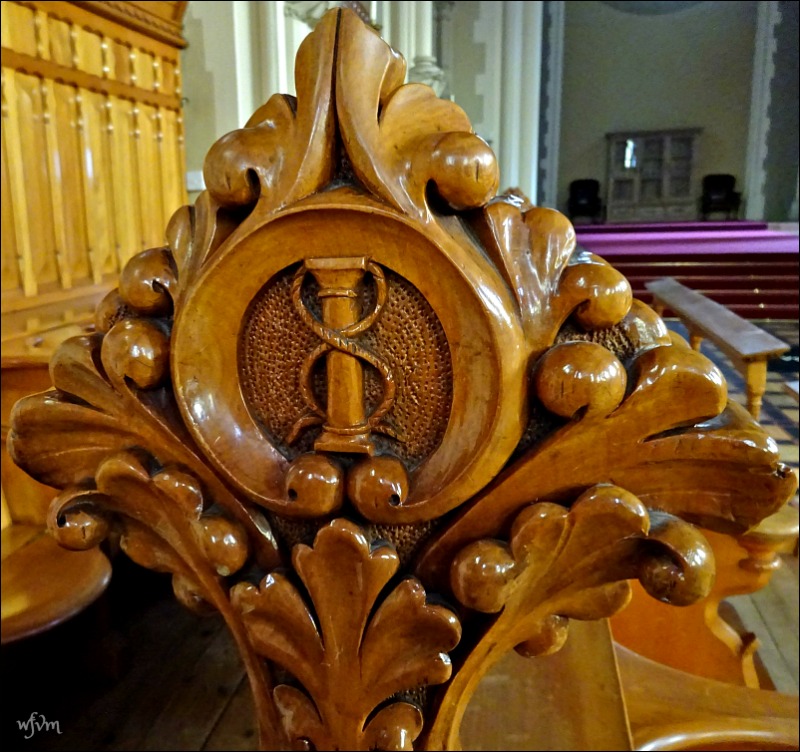 The pillar used for the Flagellation of Christ,
The rope being a symbol of the betrayal of Christ by Judas when he was arrested and bound. 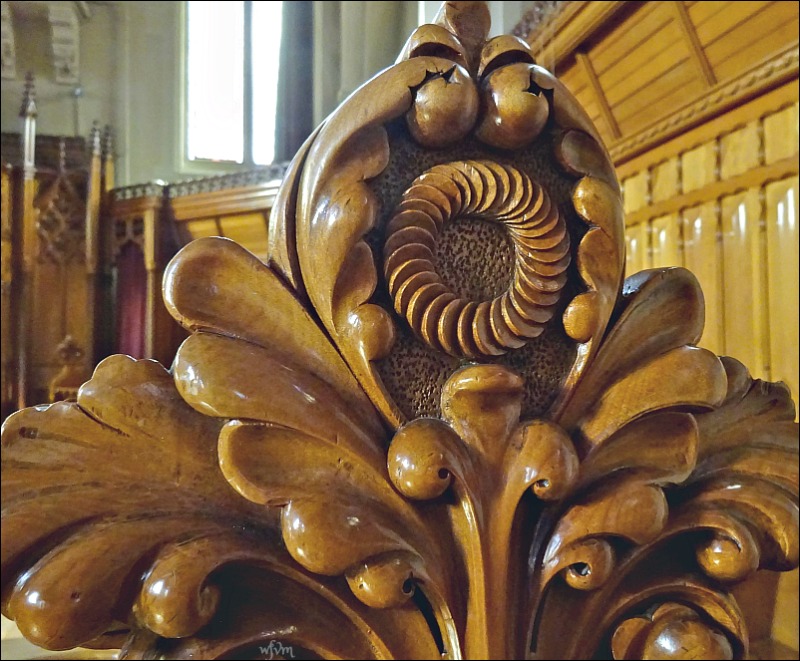 and finally the 30 pieces of silver - the price of Judas' betrayal. They have been counted and are all there.
Posted by Rosemary at 08:36