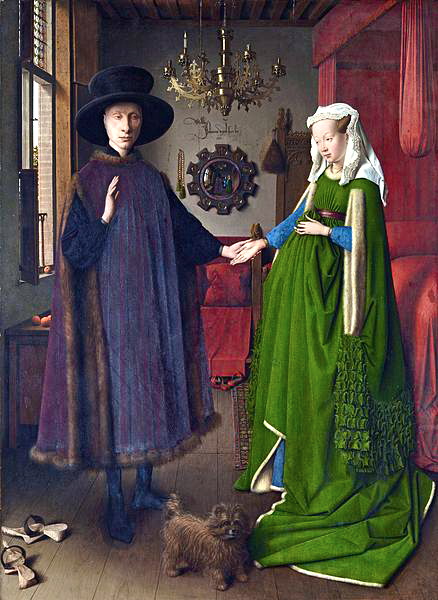 The Arnolfini Portrait by Jan Van Eyck at the National Gallery, London
This picture is one of the most discussed and analysed paintings in the Western world.
For a long time it was assumed to be a Marriage painting and as such was known as The Arnolfini Marriage. The first reaction to the painting is that she is pregnant. Not so, if you look carefully she is holding an enormous amount of fabric up against herself, thus showing the status and wealth in her clothing. It is also the style of the day. Jan Van Eyck used the same style of dress in several of his paintings.

A detail from Jan van Eyck's Dresden Triptych showing St. Catherine - note the way a large swath of fabric is held firmly above the book she is reading, and how she looks pregnant due to the style of dress.
The couple are identified as Giovanni di Arrigo Arnolfini and his wife Jeanne Cenami. Giovanni was a wealthy silk merchant from Lucca, Italy, but resided in Bruges.
A chance discovery in the 1990s established that they were married in 1447, but the painting is dated 1434. This has led to much speculation about the portrait. It is now thought by some to be a Memorial painting to a previous wife. However, opinions are still very much split on the painting, and for this reason, I set out my view as to why I think that it is a Memorial painting.
My first reason being that the women wears the white headgear of a married women with her hair securely tucked away. A bride of the period would have had free flowing long hair. 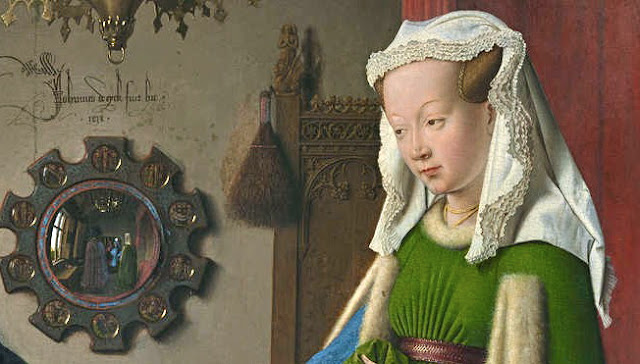 The roundels at the edge of the mirror depict Christ's passion and death. The scenes of the living Christ are on the man's side; the scenes of his death and resurrection are on the woman's. There are two figures reflected in the back of the mirror, one of which is assumed to be that of Jan van Eyck.
Above the mirror van Eyck has left his signature -Jan van Eyck was here 1434 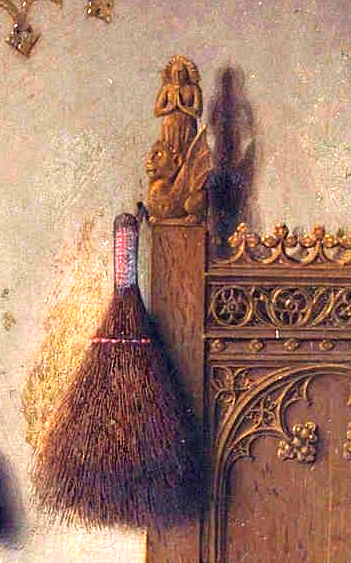 St. Margaret is the patron saint of childbirth. A dragon is her attribute and she is normally depicted trampling it under foot as here. Her praying figure could also be taken as interceding for the soul of the departed following the women's death during childbirth. 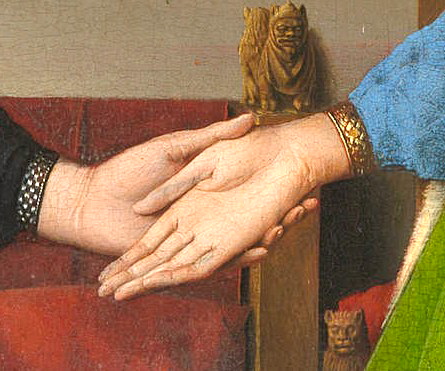 Immediately above the woman's hand and below there  are carved wooden grosteques, perhaps presaging her death. 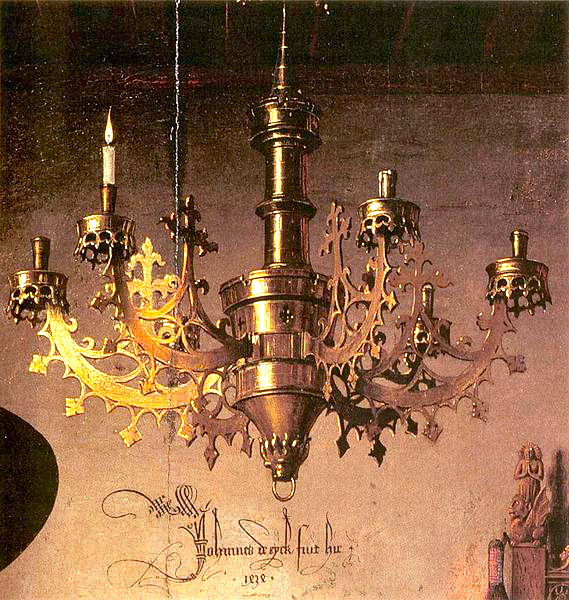 The candles have gone out apart from the one on Giovanni's side. A metaphor used in literature interprets this as, he lives on, she is dead. 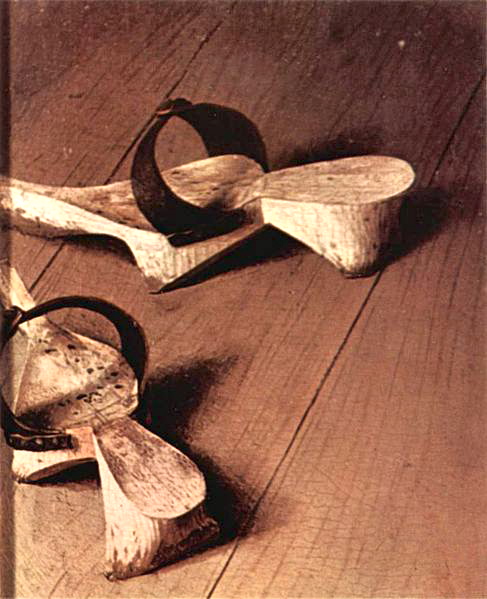 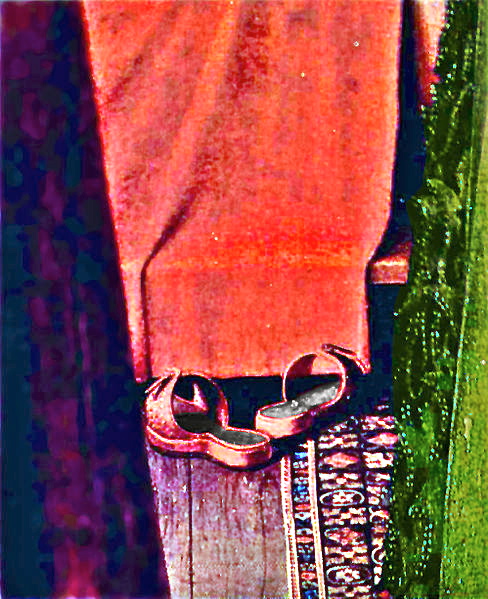 The couple have removed their shoes in recognition of the sanctity of the bedchamber, turning it into a holy place. However, one of her shoes sit on a carpet in front of the bed alluding to the fact that she may have died in childbirth. 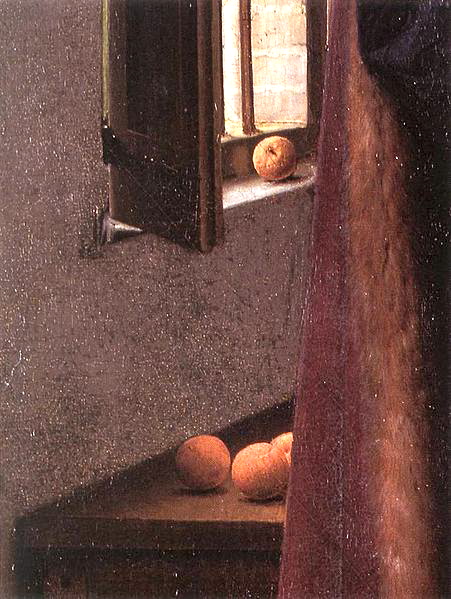 The oranges on the windowsill and chest may symbolise purity and innocence that reigned in the Garden of Eden before the Fall of Man. They are also a further indication of wealth as oranges were an uncommon sight in Bruges. The cherries on the tree at the window are often considered to symbolise sweetness and are the Fruits of Paradise.
There are other clues I have not mentioned that you could perhaps interpret yourself. The little dog, the rosary hanging on the wall - the brush on a hook just below St. Margaret on the bedpost, the red bed hangings? Just a few thoughts for you to ponder.
Addendum:
Following a comment from Olympia I am now adding the painting Las Meninas by Velázquez. The painting shows a mirror that reflects the upper bodies of the King and Queen. They appear to be placed outside the picture space in a position similar to that of the viewer, although some scholars have speculated that their image is a reflection from the painting Velázquez is shown working on. Olympia comments that Velázquez saw the Arnolfini Portrait when it travelled from Flanders to Spain which may have given him the idea to employ a similar technique to that of Jan van Eyck, viz using the reflection from the mirror. 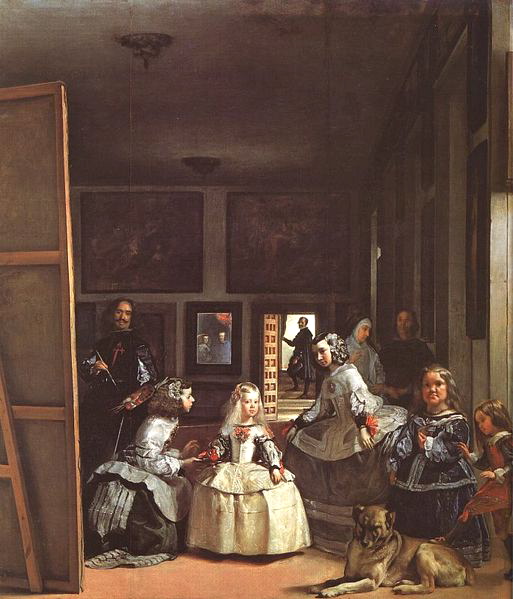 Following a critique from John Kendal Hopkins, I am pleased to add part of his comment :-
' In the painting Las Meninas by Velázquez, I can assure you, as someone that has taught perspective to architecture students for nearly two decades, there is only one solution. The reflection must be the king and queen in the large vertical canvas. The perspective is very simple and straight forward in this painting, and I am used to teaching reflection and cast shadows of curving shapes or inclined lines "walking" up stairs, etc., all in perspective (and even by freehand)'.
Posted by Rosemary at 09:10