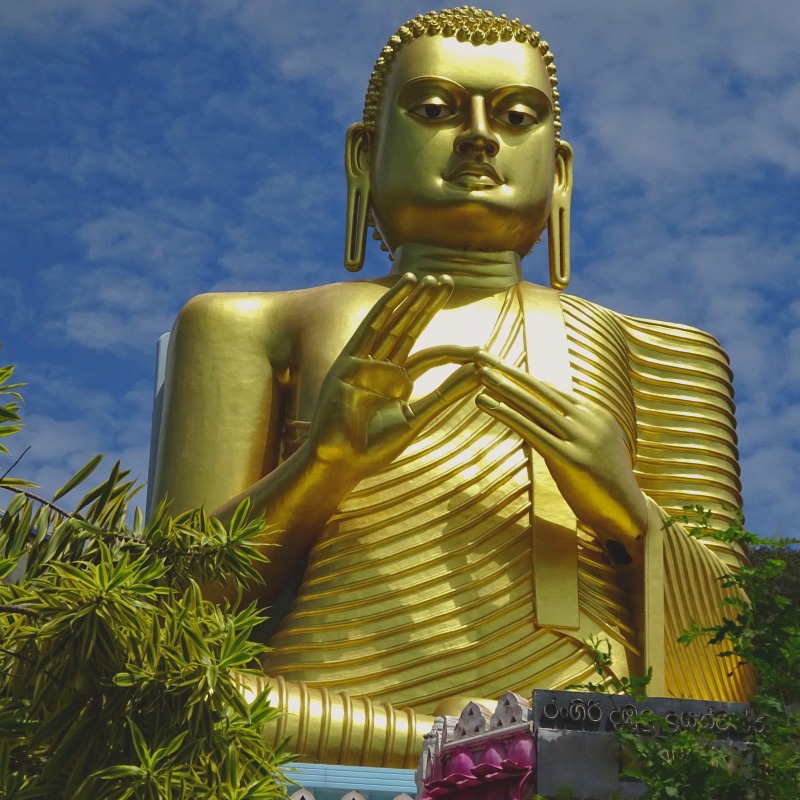 The facade of the Buddhist Golden Temple Museum at Dambulla. 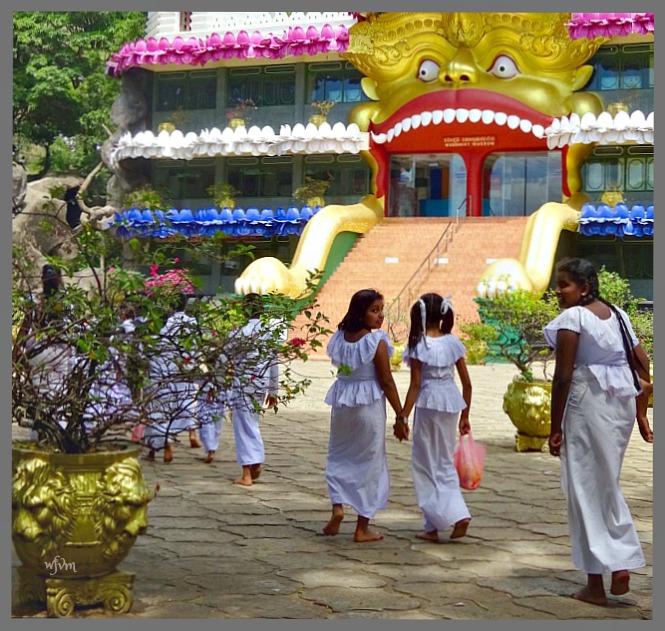 These children are on their way to attend a Buddhist Sunday School. They walk along hand in hand, laughing and chattering. To the onlooker they are noticeably happy and carefree, and what was particularly refreshing was to discover that none of them had or was using a mobile phone!!! How fresh and clean they look dressed in white - the girls wear a long skirt with a frilly blouse, and the boys a long wrap with a shirt.
Their weekly school outfits are also white - the boys wear long white trousers and shirts whilst the girls wear white knee length pleated skirts and blouses. Whether arriving at school in the morning or returning home in the afternoon they always look immaculate! 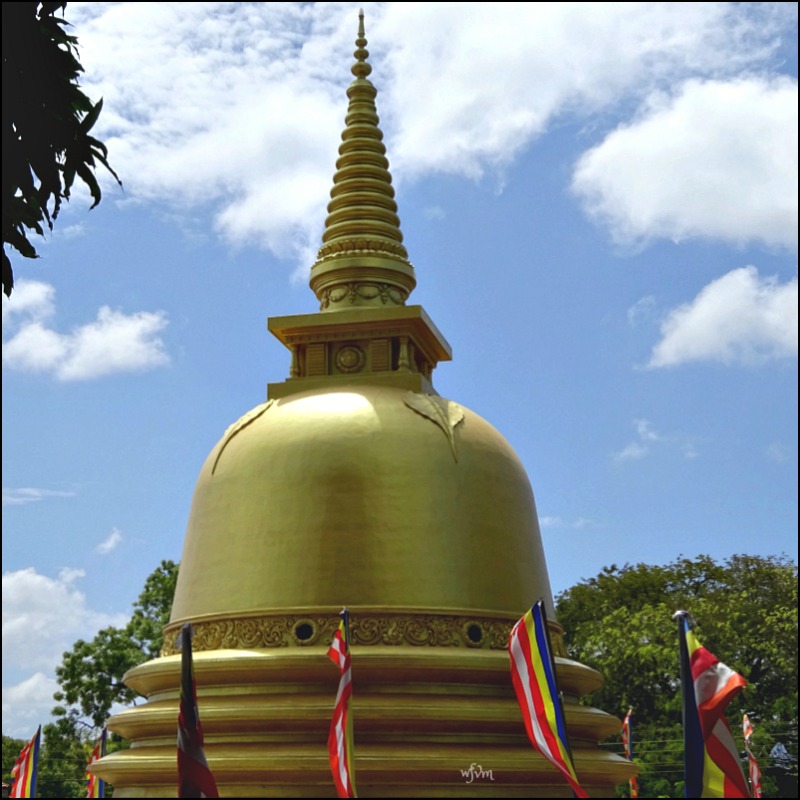 Dambulla Golden Pagoda
The town of Dambulla, however, was not for us, as we were heading up a local mountain to visit a UNESCO World Heritage Site. 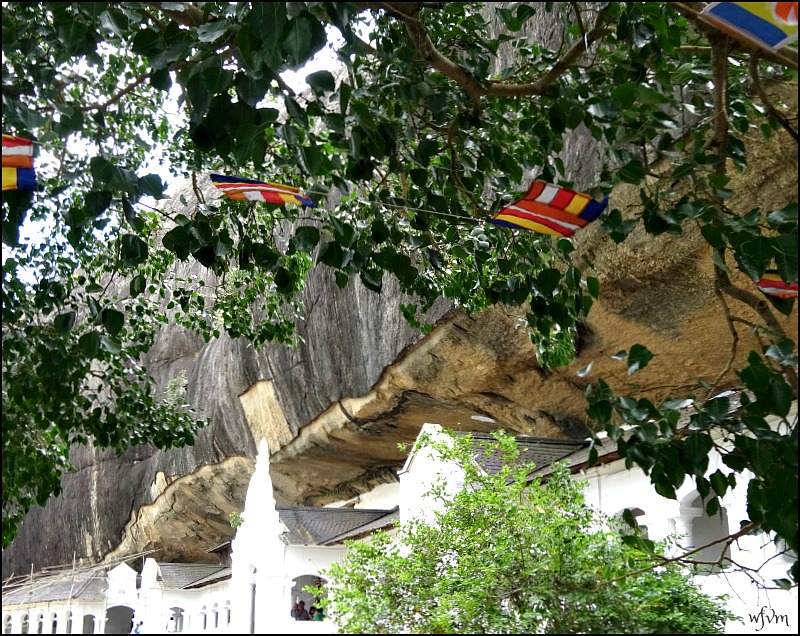 he Dambulla Cave Temples date back to the 1st century BC when King Valagambahu sought refuge from monks there following his exile from the ancient city of Anuradhapura. When he eventually regained his throne 14 years later he converted the caves into rock temples to show his gratitude to the monks for their sanctuary. Down the centuries several Sri Lankan kings have also added further embellishments to them.
There are five caves to visit, which would prove challenging to the soles of our bare feet. Having made the final steep climb up the mountain via many steps, we then deposited our shoes with what we nicknamed 'the shoe mafia man' - you have to pay to get them back again! 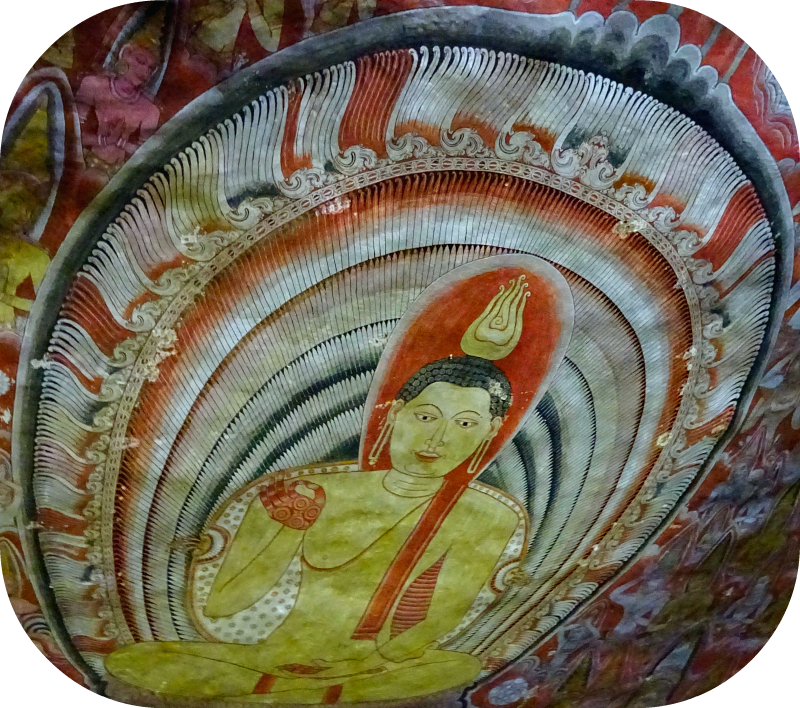 Every single wall and ceiling is completely painted.  There are over 150 different statues - it is difficult to interpret these images with Western eyes which are so unaccustomed to seeing Buddhist art and symbols. 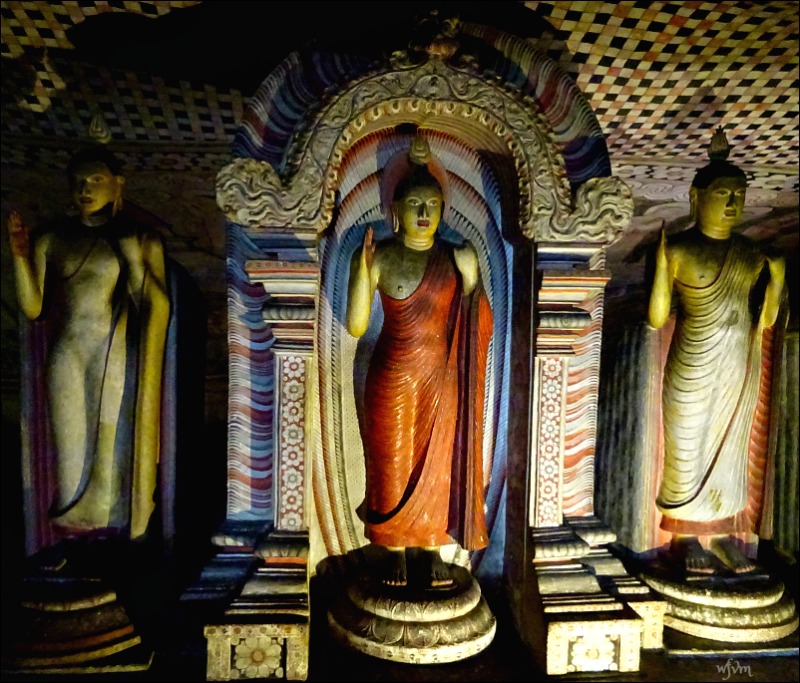 This is a standing Buddha surrounded by a very long row of assistants. Their right hand gesture represents reassurance and safety which dispels fear and accords divine protection and bliss. 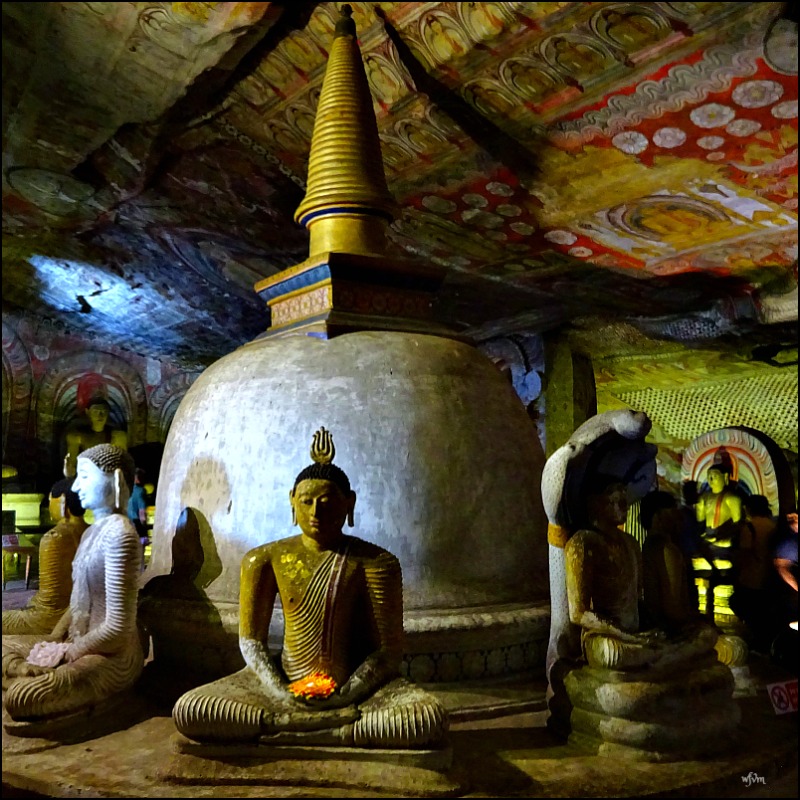 Meditating Buddha pose around a stupor 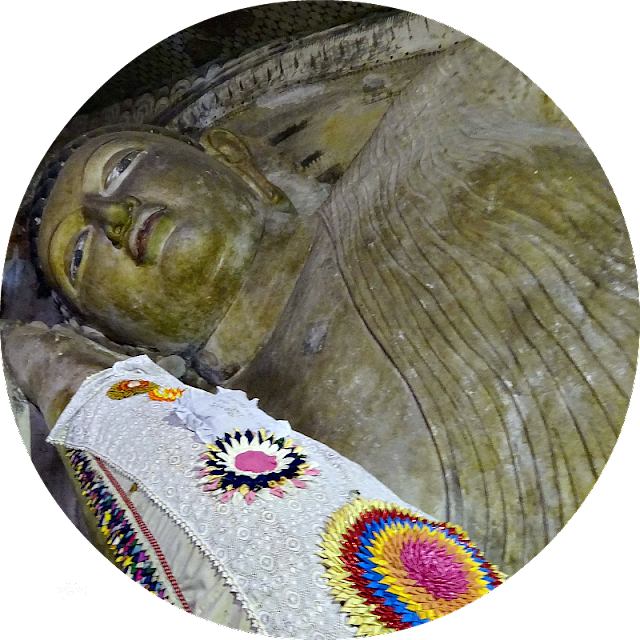 This reclining rock Buddha is 14m (46ft) long and carved into the wall of the cave. A reclining Buddha historically represents Lord Buddha during his last illness, and about to enter pari nirvana. 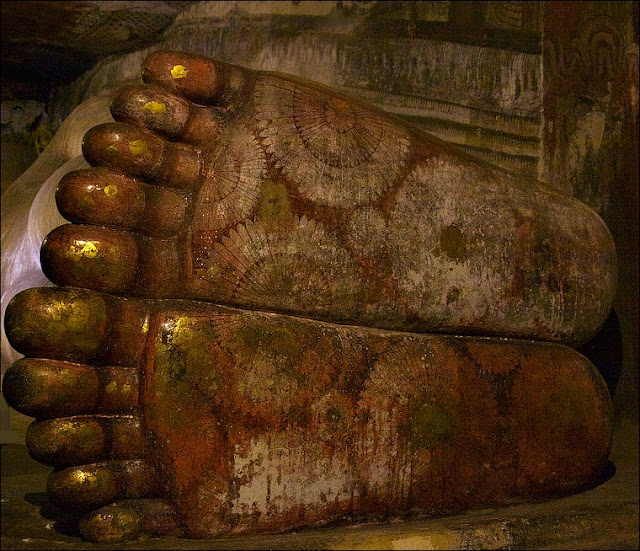 The beautifully decorated enormous feet of the reclining Buddha are painted in a design combining the lotus flower and the wheel of dharma. These feet are about 7ft (2m) high. 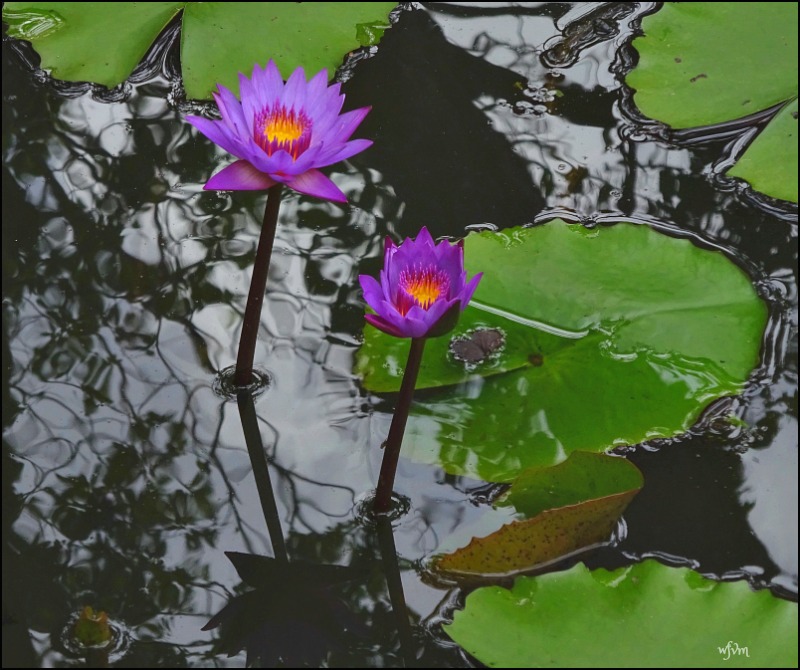 In Buddhism the lotus flower is a symbol of purity - their roots are in muddy water, but their flowers rise above the mud to bloom both fragrantly and clean - a lotus represents faith.
Gautama Buddha - Lord Buddha, was born in 623 BC, in Lumbini, Nepal - he was an ascetic and a sage. It was his teachings upon which Buddhism was founded. 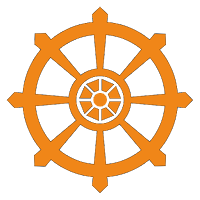 The wheel of dharma represents Gautama Buddha's teachings and walking the path to Nirvana. It is connected to the Four Noble Truths and the Noble Eightfold Path, and along with the lotus flower is one of the most important Buddhist symbols. 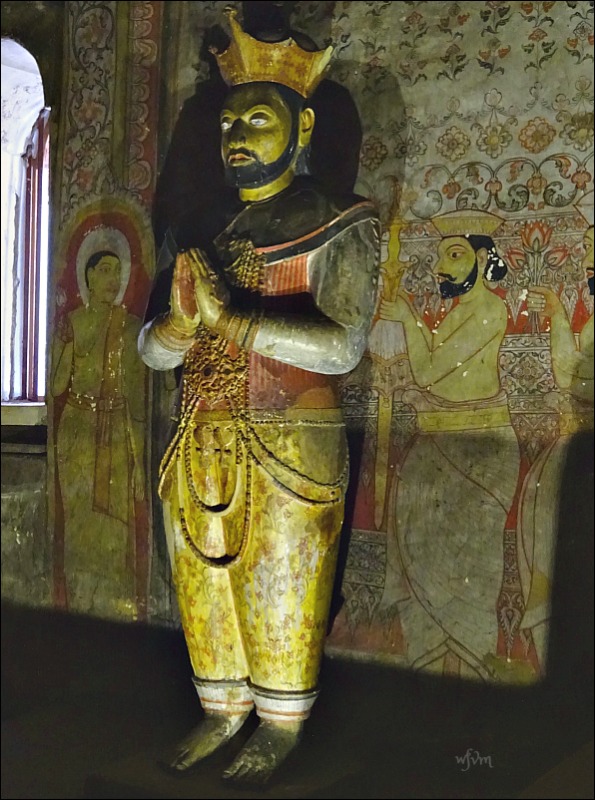 This is c17th King Kirti Sri Rajasinha - the last king of Kandy, and the guardian of this cave temple along with his attendants painted on the wall behind him. He is credited with having revived Buddhism in Sri Lanka. 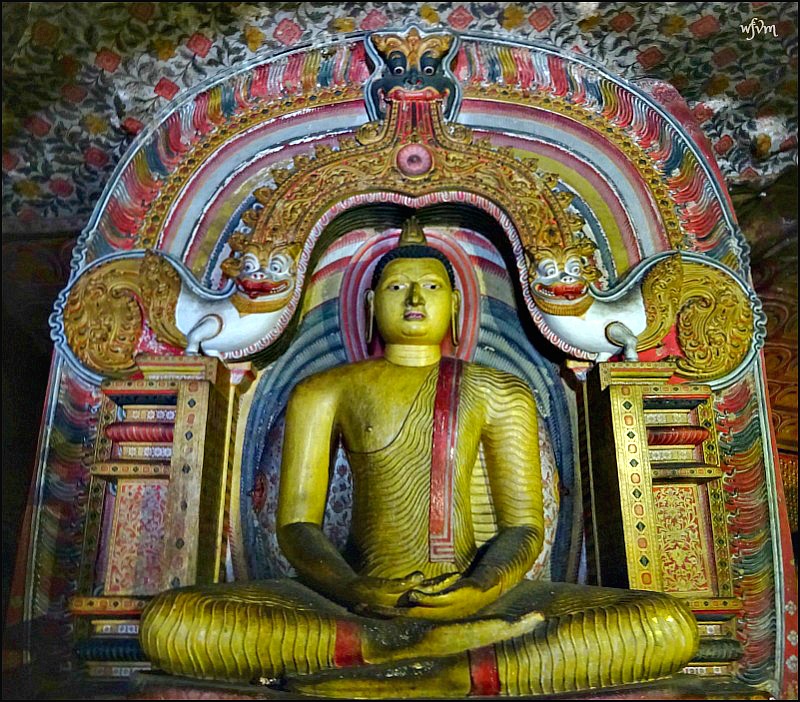 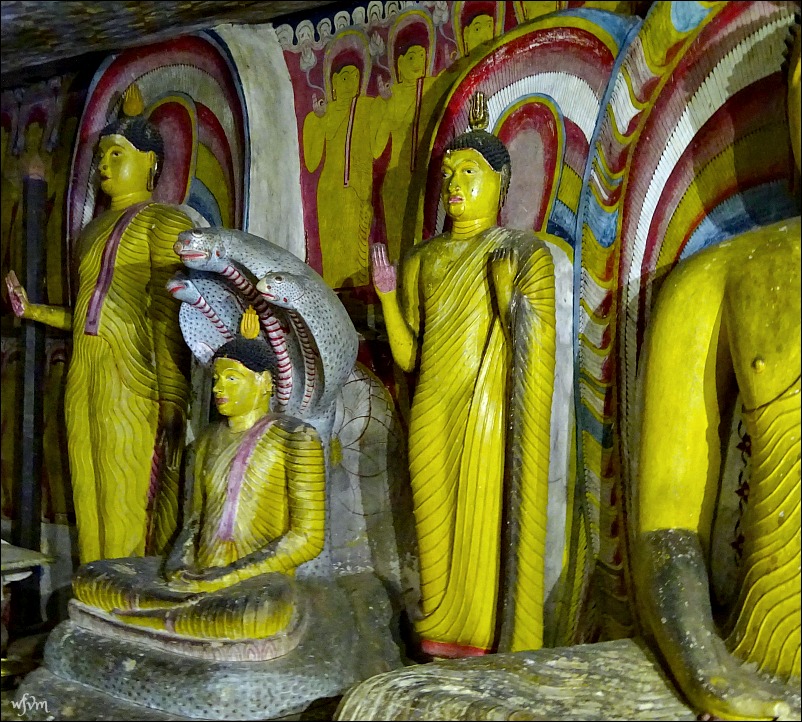 Seated Buddha with a three headed snake shielding his head.
It is said that four weeks after Gautama Buddha began meditating under the Bodhi Tree (see below) the heavens darkened for seven days, and a prodigious rain descended. However, the mighty King of Serpents, Mucalinda, came from beneath the earth and protected with his hood the one who is the source of all protection. When the great storm had cleared, the serpent king assume his human form, bowed before the Buddha, and returned in joy to his palace. 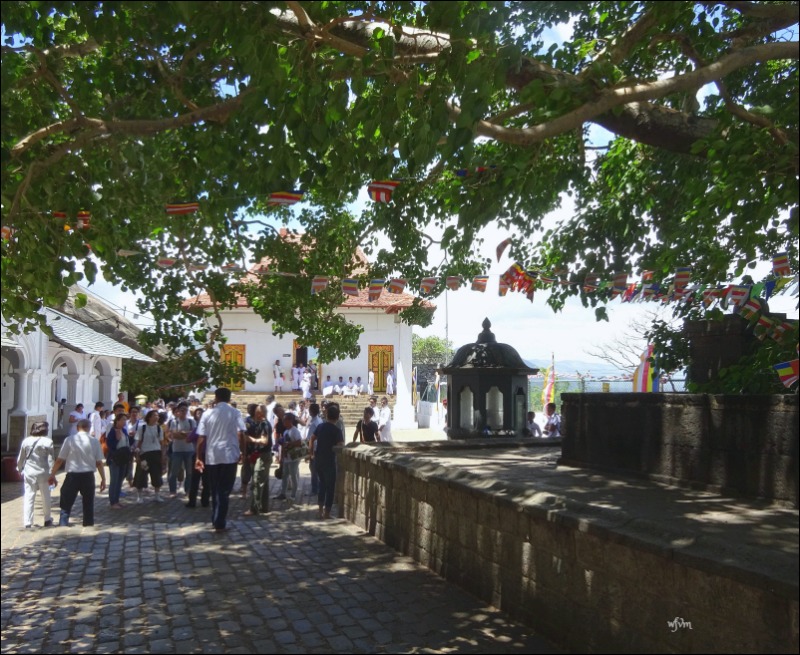 Sacred Bohdi Tree
Most Buddhist Temples have a sacred Bohdi tree, the reason being that Guatama Buddha attained enlightenment whilst meditating beneath one.
The time has arrived for us to try and locate the shoe man, collect them, and take the many steps back down the mountain side as we continue onwards to the city of Kandy. 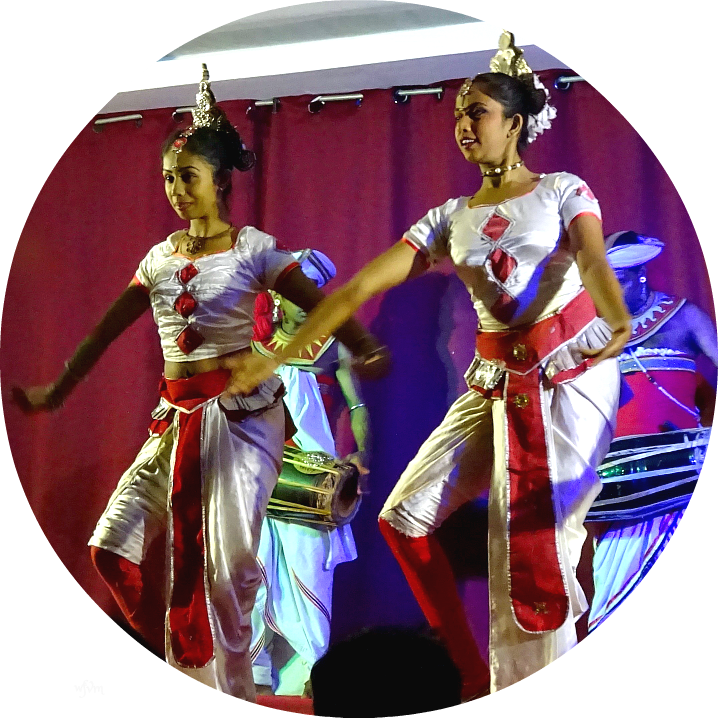 In Kandy we are greeted by dancers, 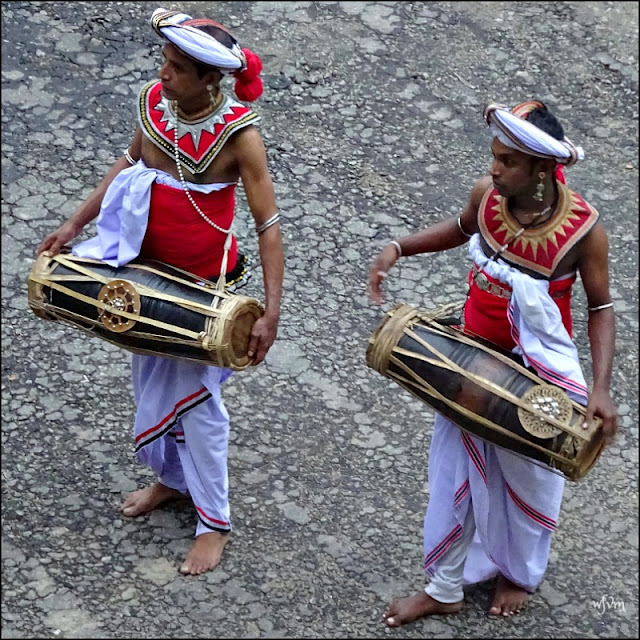 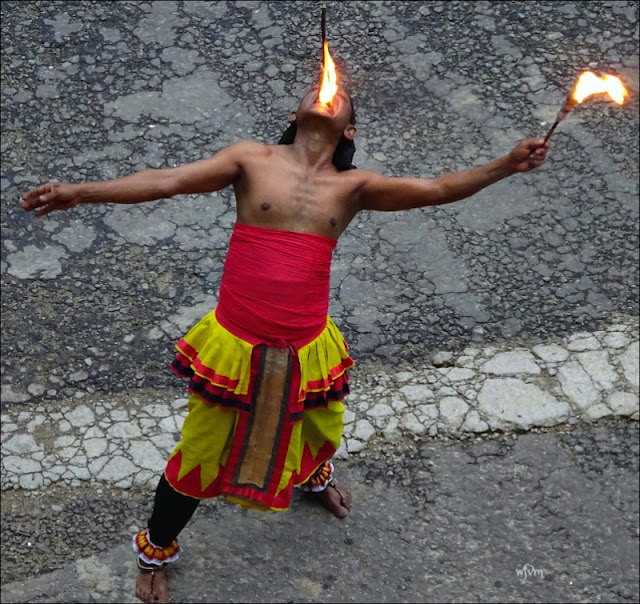 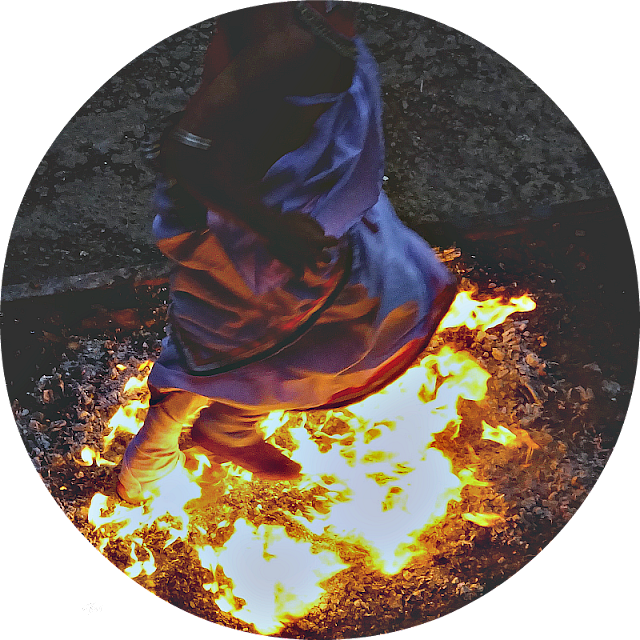 fire walkers.
I wonder whatever will we see next!
Posted by Rosemary at 10:59