A Tudor Girl from Derbyshire - Part 1 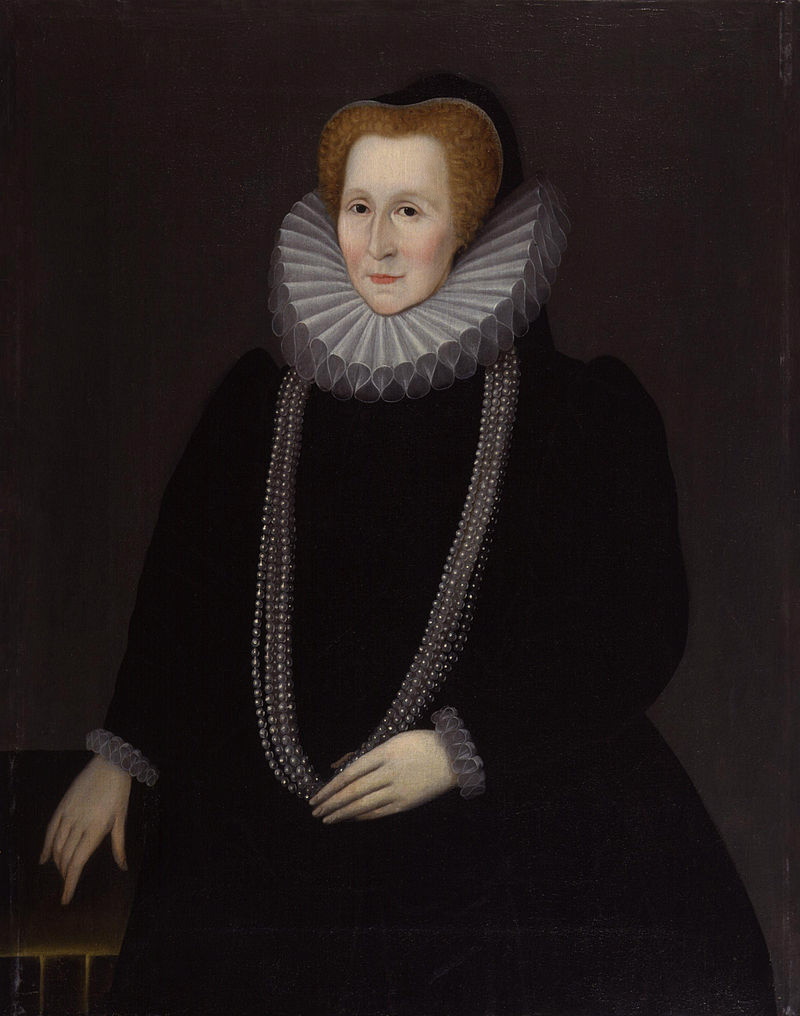 Elizabeth Countess of Shrewsbury - 'Bess of Hardwick' - National Portrait Gallery
In the year 1527 Elizabeth was born at Hardwick, Derbyshire - the fifth daughter of a Squire and Yeoman Farmer. From minor gentry she rose to become the richest women in Elizabethan England next to the Queen and was widely known as 'Bess of Hardwick'.  She was a young girl when her father died, and her mother remarried. Bess was placed in service to a local prominent household - Sir John and Lady Zouche of Codnor Castle. Whilst there she met her first husband, a wealthy youth called Robert Barlow. They married when she was 15 and he was 13 but he had a terminal illness and died within a year, the marriage was unconsumated, but he left her a third of his income and a widow's pension.
Five years later she met and married wealthy William Cavendish of Suffolk, they had 8 children, bought the Chatsworth estate for £600, and Bess became a Lady in Waiting to Queen Elizabeth 1. Ten years after their marriage William died leaving Bess a widow once more. Two years passed and she married Sir William St. Loe, who was Captain of the Guard to Queen Elizabeth - he was so enamoured with Bess that he endowed her with his estates and disinherited his own kinsfolk when he died five years later.
Three years on and her final fourth marriage was to George Talbot, 6th Earl of Shrewbury - an extremely rich and powerful man who was made the guardian of Mary Queen of Scots. Bess separated from Talbot accusing him of an affair with Mary, which she was later made to retract by Queen Elizabeth and her Council. Lord Shrewsbury died soon after, and she inherited his iron works, smithies and glass works, along with Bolsover Castle and its coal pits. She had parks in Staffordshire, Derbyshire, and Yorkshire used for pasture, along with minerals and timbers, and she gained a large widow's settlement.

Bess was now extremely wealthy but also very shrewd, she had ambitions that her granddaughter, Arbella, would one day become queen. One of her sons from their Cavendish father became the Duke of Devonshire, but her daughter, Elizabeth Cavendish, married Charles Stuart, 1st Earl of Lennox which gave their daughter Arbella an excellent claim to the English throne through the Stuart line especially as Queen Elizabeth I was without issue. 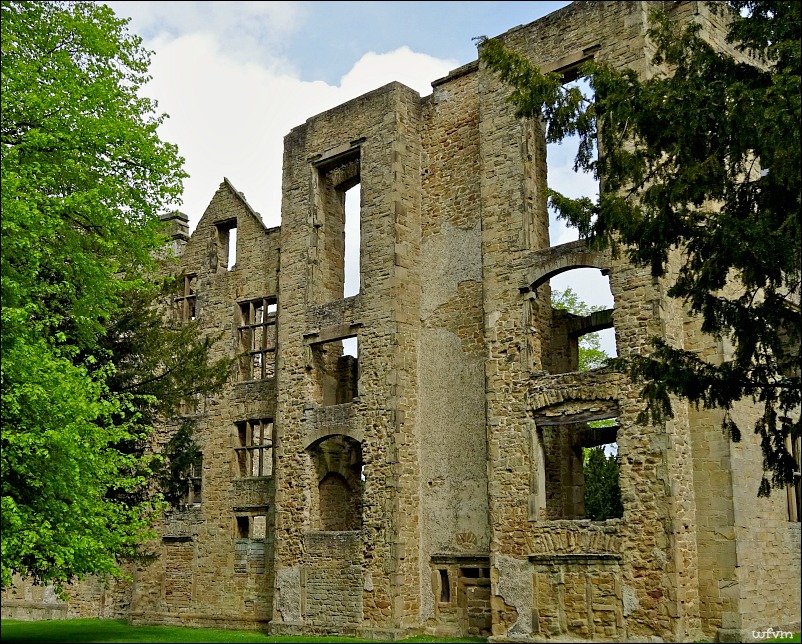 Now a widow in her late fifties Bess set about building Hardwick Old Hall on the spot where her father's modest manor house had once stood, but with her even greater wealth she abandoned it in favour of Hardwick New Hall which she had built literally over the garden wall from the incomplete building.

Hardwick New Hall took seven years to complete.  It is one of the finest Elizabethan houses with it's six towers filled with huge glass windows. Glass was a great luxury during the mid C16th and was only available to the aristocracy or the very wealthy, but of course Bess also had at her disposal her very own glassworks too 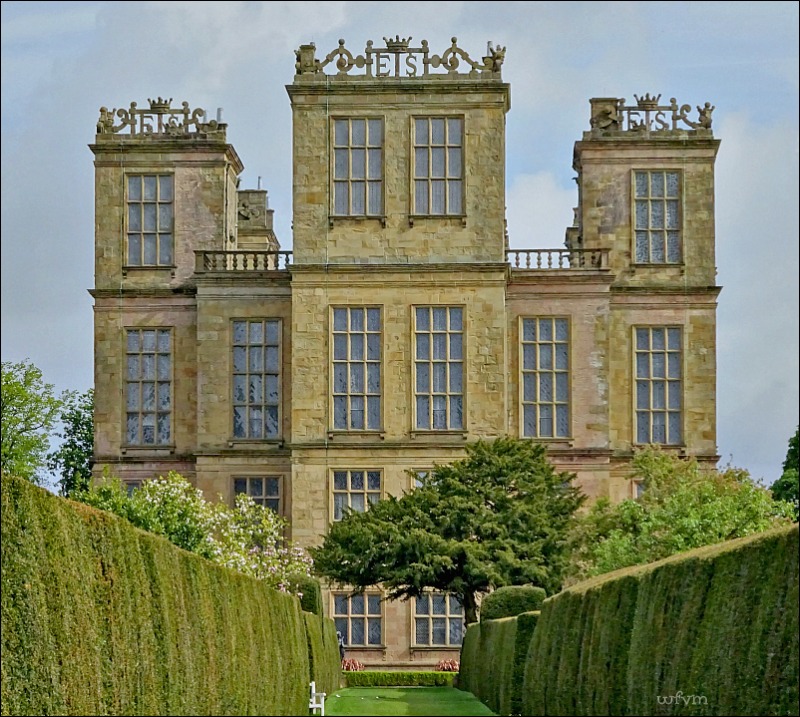 Bess lived to the ripe old age of 80, a very long life in the c16th - but more on Hardwick where she lived for her last 20 years in the next post.
Forgive me my digression, but it is tempting to compare 'Bess of Hardwick' to US President candidate Donald Trump. Both risen from provincial origins, married several times, with a brood of children. Formidable Bess had 4 husbands and 8 children, Trump 3 wives and 5 children - he still has time to catch her up! Both built themselves impressive towers filled with glass as statements of both their new found power and great wealth. Bess emblazoned each apex of her six towers with her cipher carved in stone (ES and crown stands for Elizabeth Countess of Shrewsbury) Donald Trump's glass towers are adorned in large gold lettering proclaiming 'TRUMP'.
Bess nearly became the grandmother of a queen, but could Donald Trump become President? 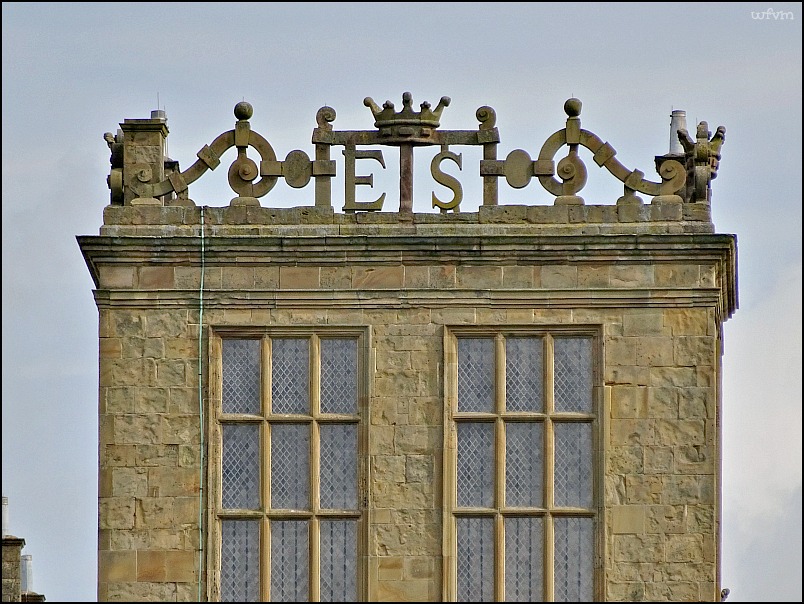