In c16th Europe subjects were expected to follow the religion of their rulers, and those who did not were frequently persecuted. Initially Queen Elizabeth l was more tolerant than most rulers, and at the beginning of her reign in 1558 Catholics were financially penalised but otherwise spared ill treatment. They could hold public office, but had to pay a small fine if they did not attend Anglican service in their parish church on Sundays. Those who stayed away were known as recusants - many who made a  token visit but who remained Catholic became known as 'Church Papists'. However, later in her reign, and under pressure from the government all of this changed. 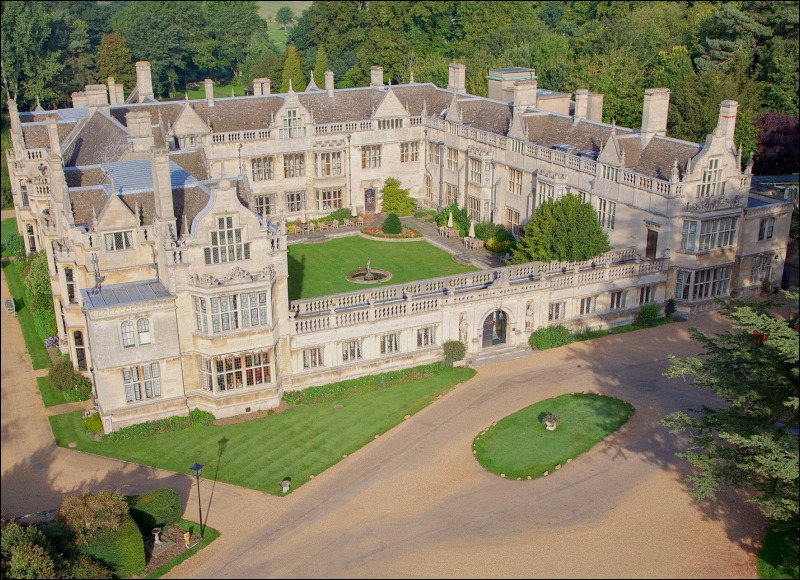 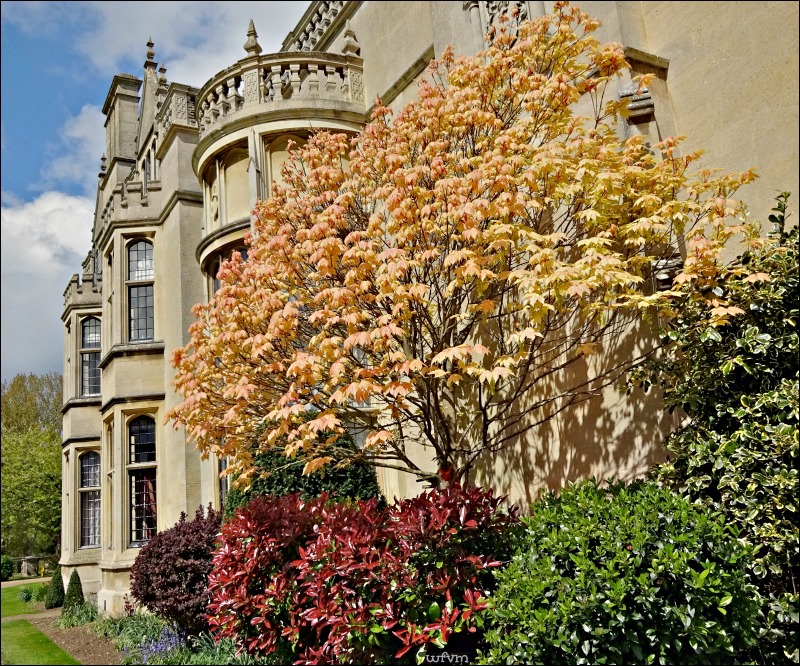 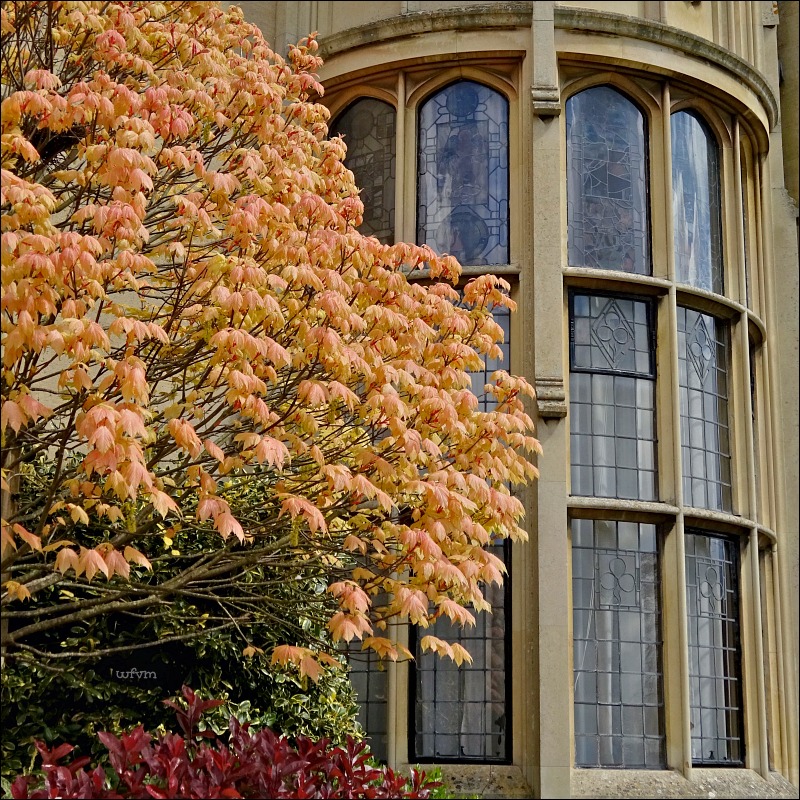 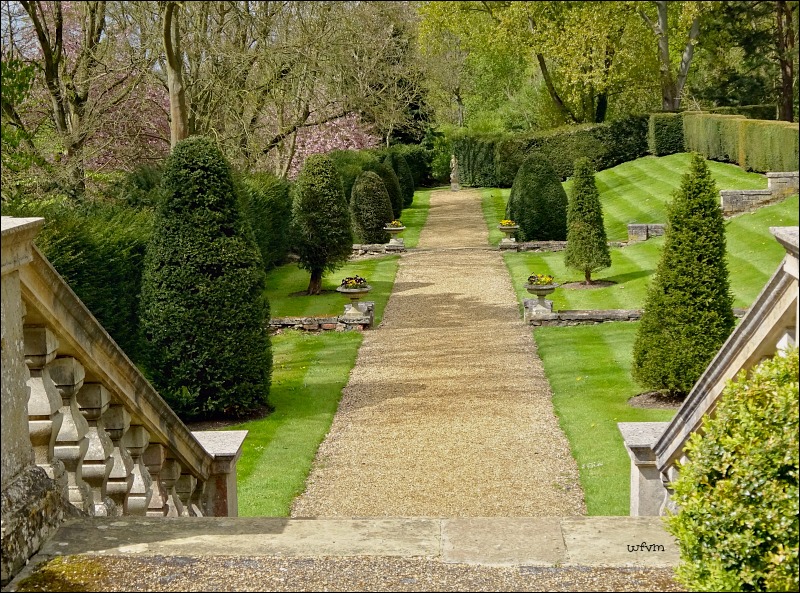 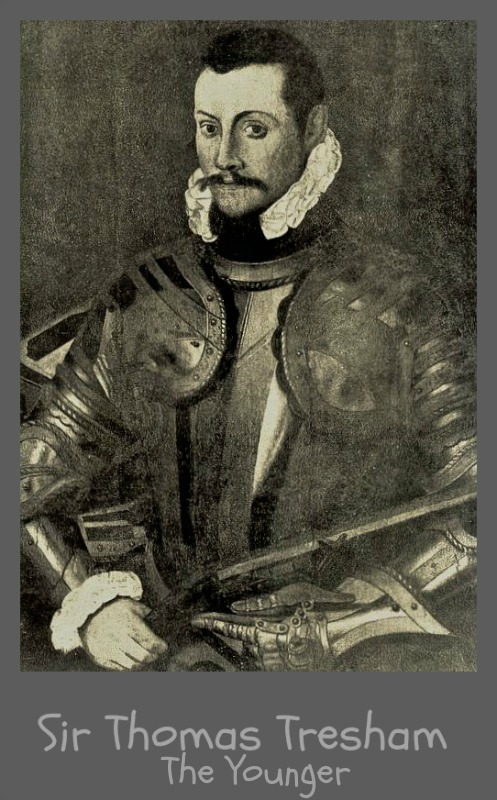 via
Thomas Tresham - the younger, was orphaned at the age of three, and sent by his grandfather Sir Thomas Tresham - the elder, to live with the prominent Throckmorton family at Coughton Court, Warwickshire. His grandfather was the Grand Prior of the Order of St. John of Jerusalem and the owner of some of the countries wealthiest estates in Northamptonshire. Thomas, the younger, became heir to these estates at the age of 15 years.
Thomas was now rich, capable, clever, well educated and well connected. He married Meriel, the daughter of Sir Robert Throckmorton, and they had ten children. He was one of a group of gentry knighted by Queen Elizabeth l at Kenilworth Castle in 1575, and must have seemed set to become one of the leading figures in the country if he felt so inclined. Although his grandfather was a practising Roman Catholic, young Thomas was a lapsed Catholic, or at least appears to have conformed to Protestantism in early adulthood. However, after the Reformation, the Roman Catholic church sent a group of missionary priests to England to revive the Catholic religion, and Tresham was one of their most important converts. He became an ardent Catholic, one of the 'recusants' who refused to attend Anglican service. Later in Elizabeth's reign the government treated all Catholics as potential traitors and all priests enemy agents and stringent penal laws were passed. Many wealthy loyal Catholic families had secret 'priest holes' built in their homes where a visiting priest could hide away from danger. They also had secret places within the house - cabinets with concealed draws and doors, which could then be turned into an altar and used for Mass.  Although fervently and openly loyal to Elizabeth l Tresham was continuously sent to prison, subject to house arrest, or under surveillance. 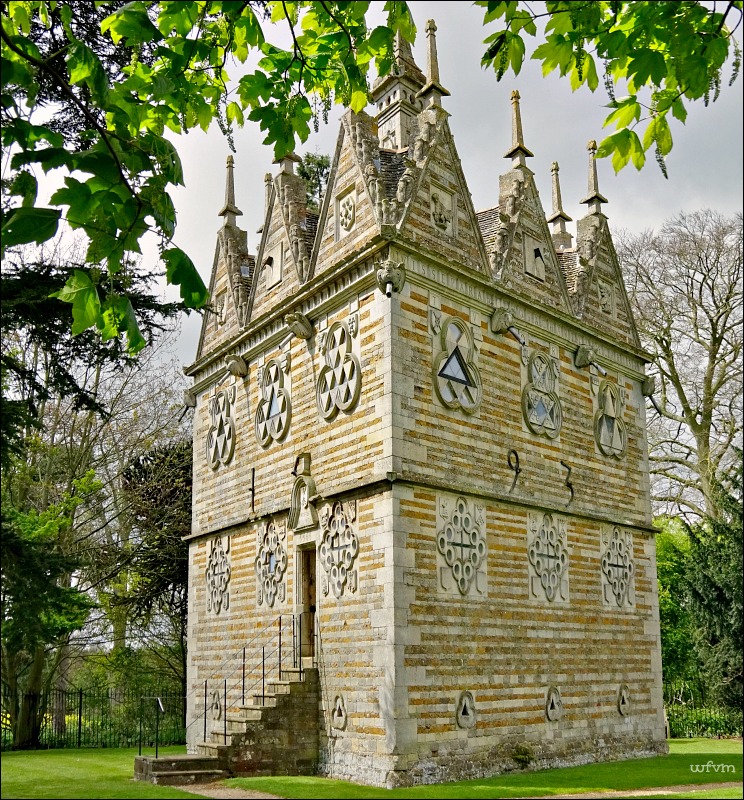 Rushton Triangular Lodge was designed by Tresham himself in the 1590s following a long spell in prison. The building is a testament to his faith, and is dominated by references to the number three, symbolic of the Holy Trinity: it has three storys and three walls, each thirty-three feet long with three windows and three gables each. The upper storey is also 33 feet wide - 33 was the age at which it is said Christ died on the cross. The exterior also features trefoils and biblical quotations together with numbers, some of which still remain mysterious in their meaning. 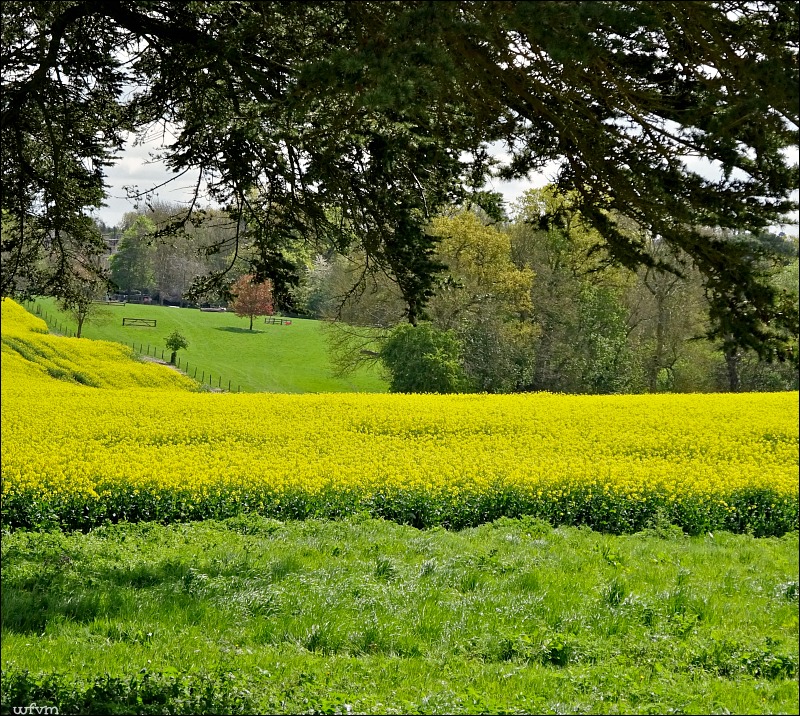 view from the lodge - Rushton Hall is just about visible behind the trees on the lefthand side
The lodge stands on the edge of the parklands to Rushton Hall, and was built as a home for Tresham's Warrener (keeper of rabbits). It originally stood in rough open ground surrounded by hundreds of rabbits amongst the grass and bracken. 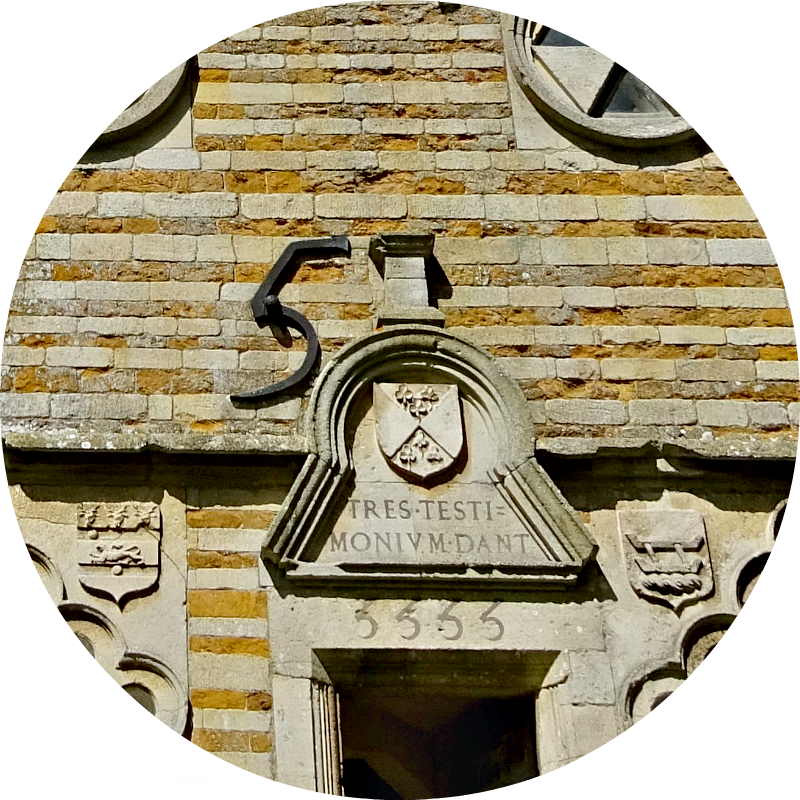 Over the entrance door is the Latin inscription 'Tres testimonium dant', and the numbers 5555. This phrase could mean either 'The number three bears witness' or Tresham bears witness' - his wife used to refer to him as 'Tres'. The first two 55 are probably a cryptogram for 'Jesus Maria', the words with which Tresham headed all his letters to Catholic correspondents: he liked coding words by the number of letters in them. The second 55 may just repeat this, or could represent the number of letters in 'Salus Mundi' (referring to Christ as the saviour of the world). Another interpretation, which does not rule out the first one (a double meaning really delighted Tresham) is that 5555 is a date. According to one contemporary computation 3962BC was the date at which the world was created. Counting the years from this date makes 5555 stand for AD1593, the year of the conception of the Lodge. The numbers 15 and 93 also appear in large metal letters fixed to the south-east and north fronts respectively. 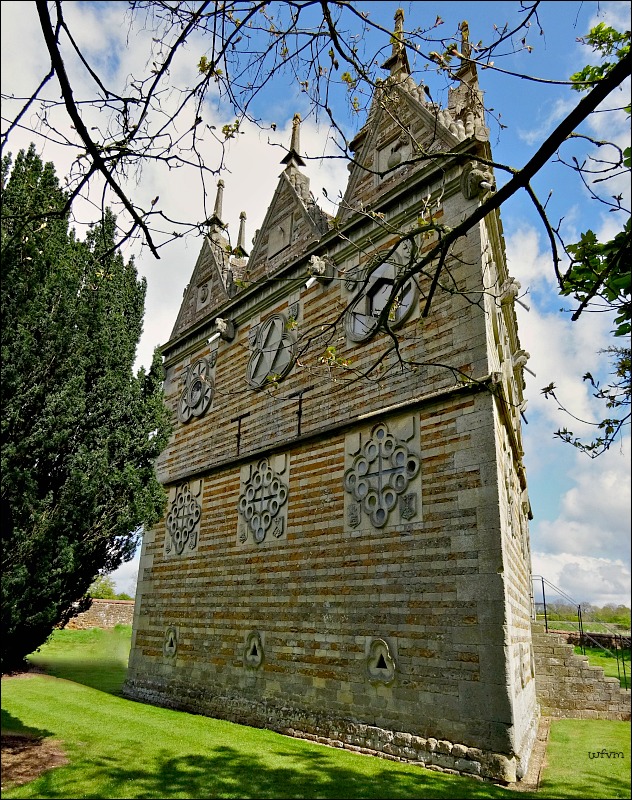 On this south-west front is TT for Thomas Tresham, and 'Tres testimonium' 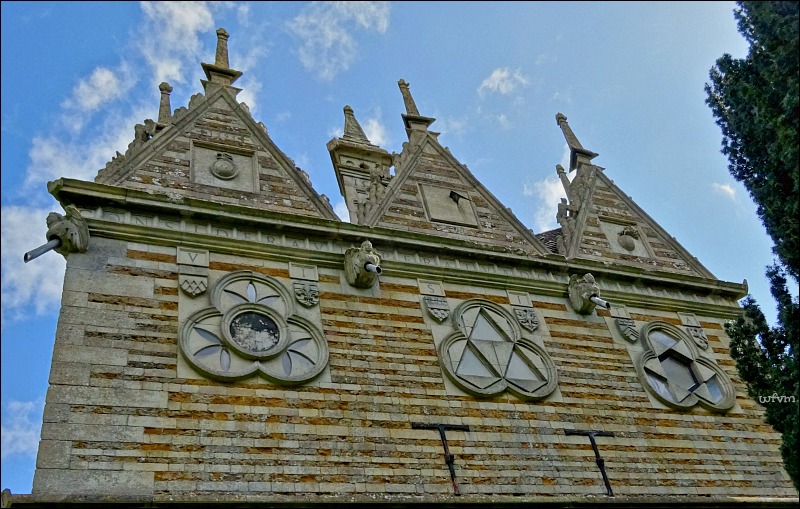 The nine angels holding water spouts under all of the gables for draining water off the roof, each one is inscribed with two letters, or with one letter and a triangle. These read sequentially around the building as SSSDDS and QEEQEEQVE. They have been convincingly interpreted as the initial letters of 'Sanctus Sanctus Sanctus Dominus Deus Sabaoth' and 'Qui Erat et Qui Est et Qui Venturus Est' - Holy, holy, holy Lord God of Hosts', 'Who was, and who is, and who will be'. The first phrase comprises the opening of the hymn of praise that occurs in the most solemn part of the Mass, just before the round wafer of unleavened bread known as the Host is, according to Catholic belief, transformed into the body of Jesus Christ.
It is not possible to describe all the numerous symbols and their meanings, but if you notice anything on these photos and would be interested to know more then I would be happy to try and give the answer.
If visiting it is well worth buying the little guide book from English Heritage who look after the lodge. 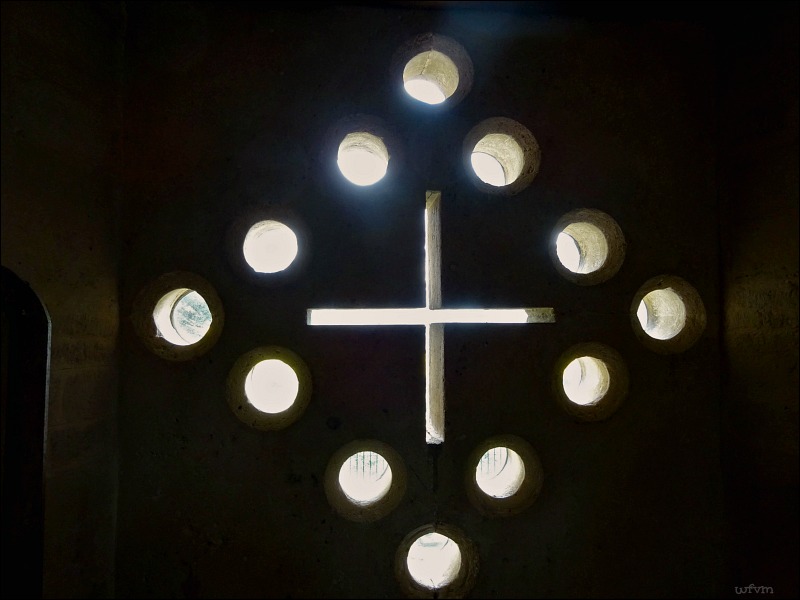 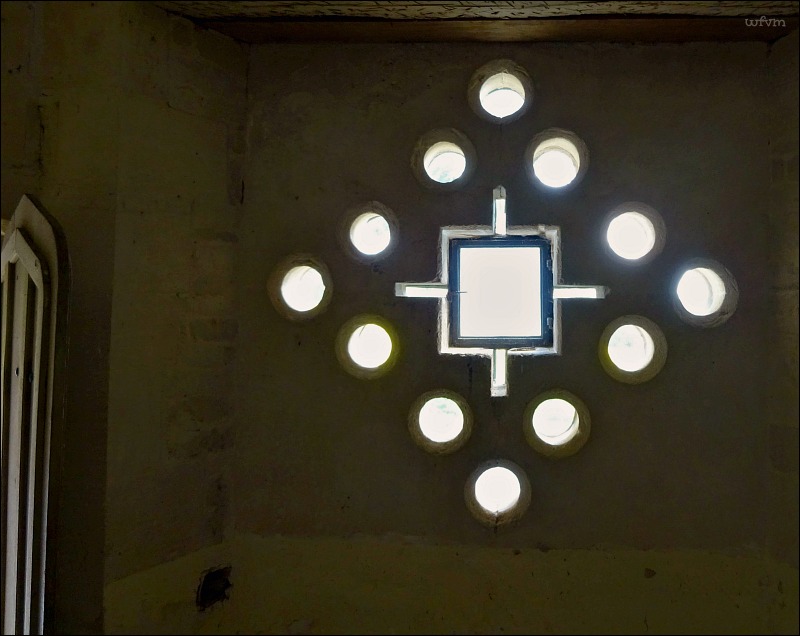 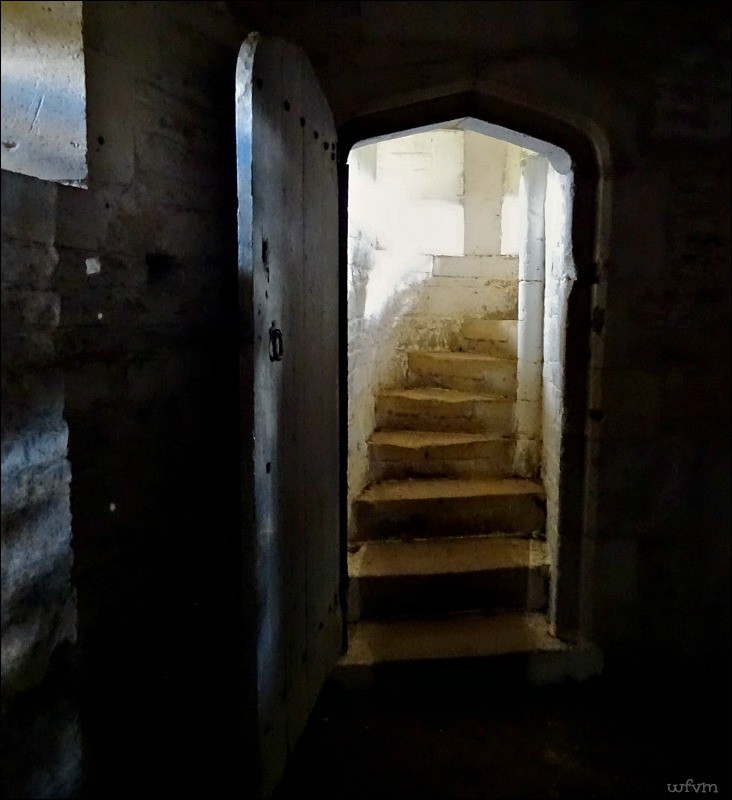 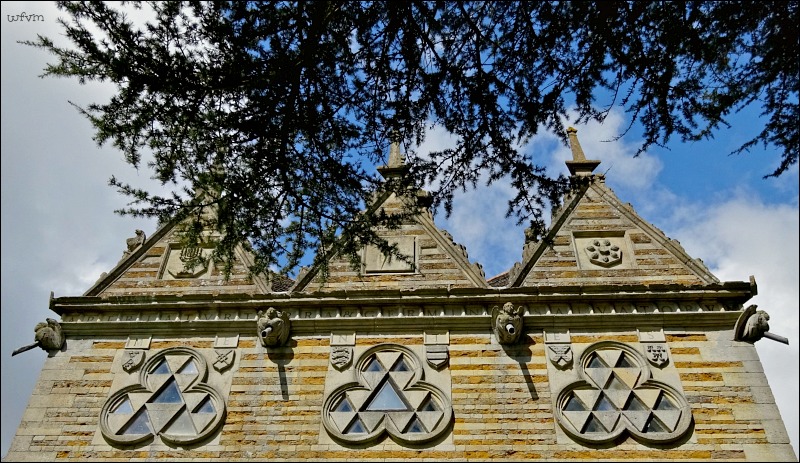 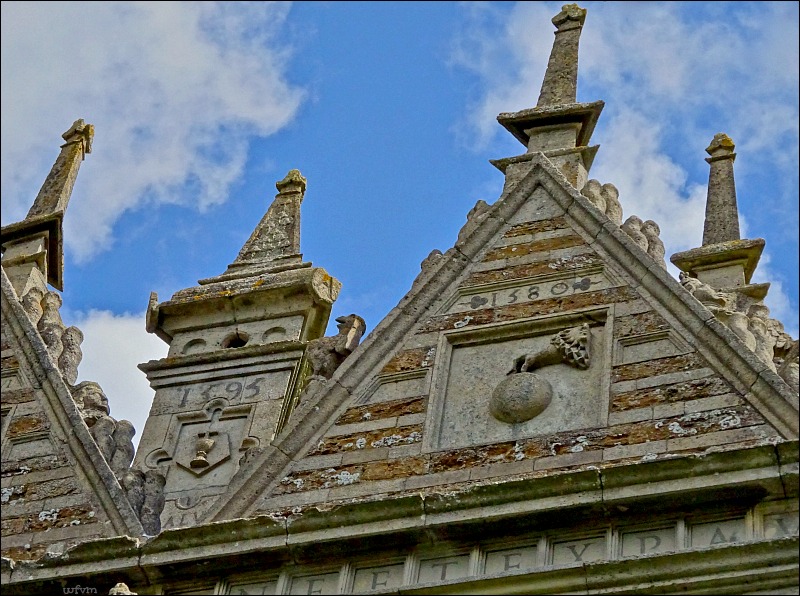 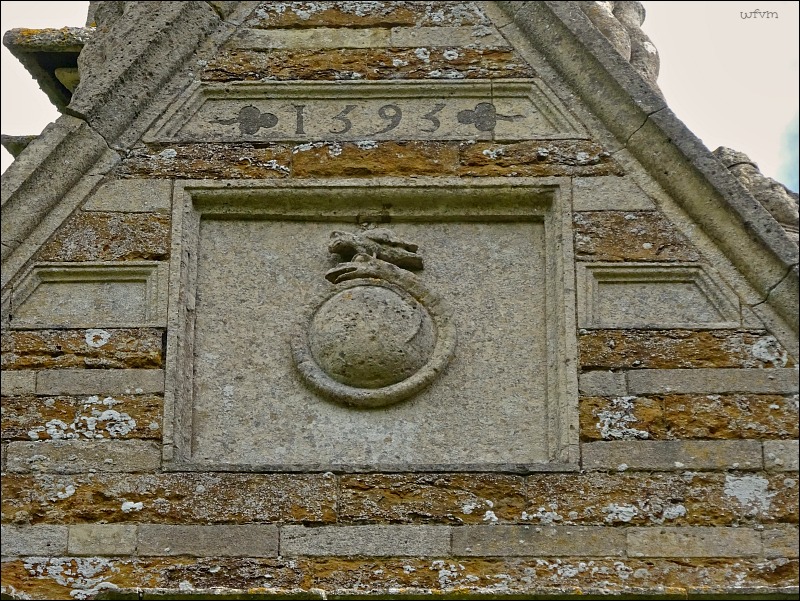