The Order of St. John 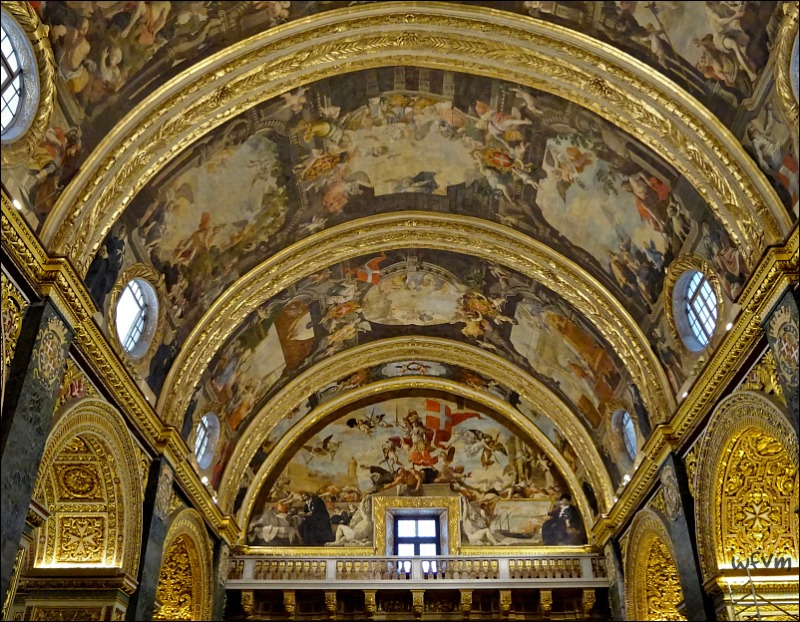 The experience of visiting several wonderful architectural buildings in Malta commissioned by the Order of St. John compelled me to augment my scant knowledge of them and discover more.
The 51st Grand Master, French knight Jean de la Cassière, commissioned the building of St. Johns Co Cathedral in Valletta. The interior is richly decorated and opulently embellished in gold - it is considered to be one of the finest examples of High Baroque architecture in Europe, and one of the world's great cathedrals. 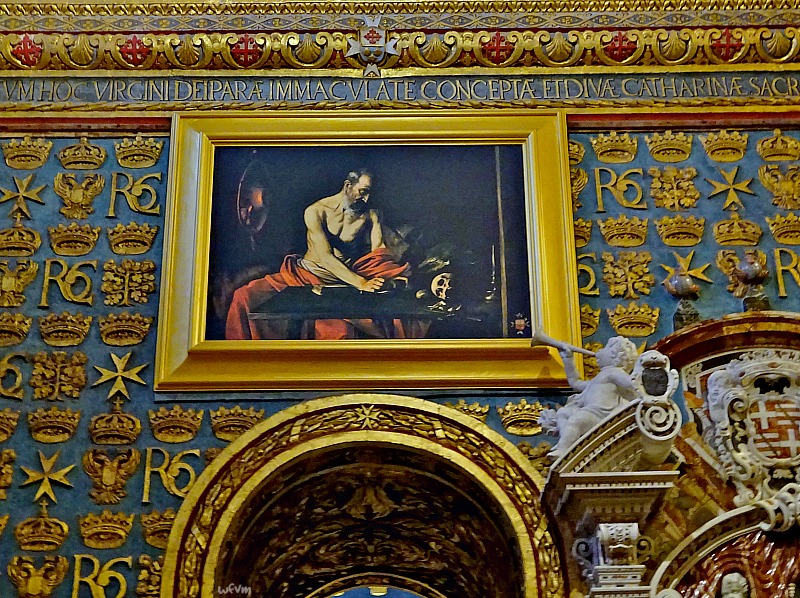 Replica of Caravaggio's St. Jerome Writing - the original is now housed in the Cathedral's Oratory which acts as a museum and where no photographs are allowed 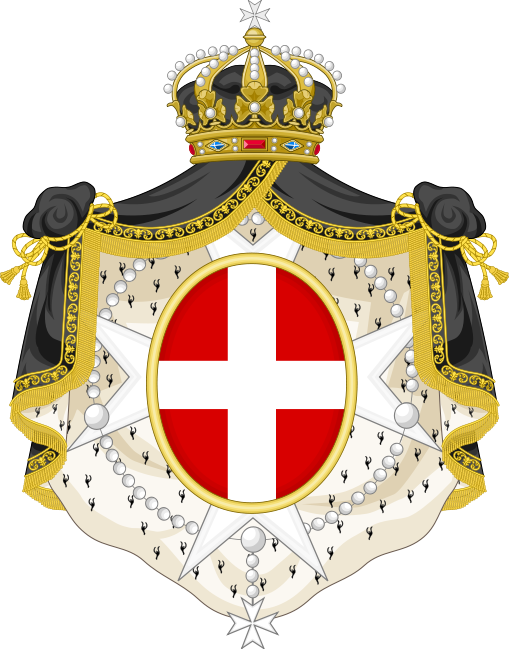 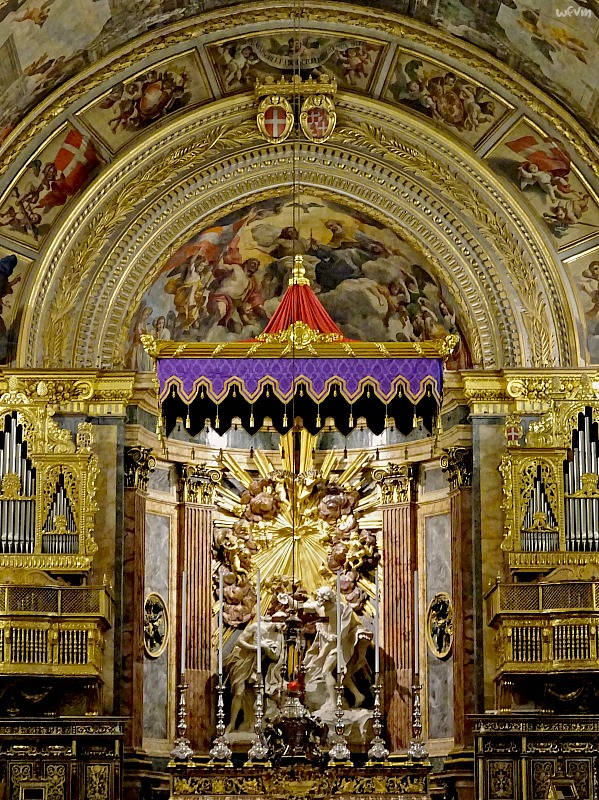 The story of the Order of St. John of Jerusalem (the Knights Hospitallers) begins in the C11th, when Italian merchants obtained permission from the Muslim caliph to set up a Christian hospice in Jerusalem. In the beginning the calling of the Order was principally to care for the sick, but in time the emphasis shifted to a military role, that of fighting for the faith. In 1187 the knights were driven from Jerusalem by Saladin, and then spent the following centuries fighting different Muslim leaders from their bases in Acre, Cyprus, and Rhodes before coming to Malta. They were given the island by the Holy Roman Emperor Charles V in 1530 and stayed for over 260 years. Their legacy to Malta is huge -  grand palaces, churches, fortresses, citadels, watch towers located at strategic points around the coast, and many of the buildings are still filled with wonderful treasures 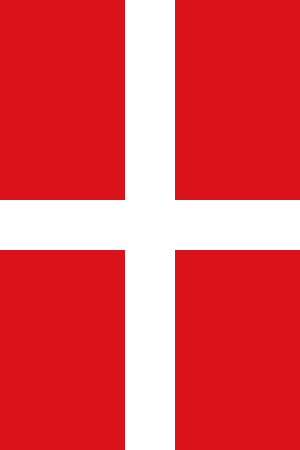 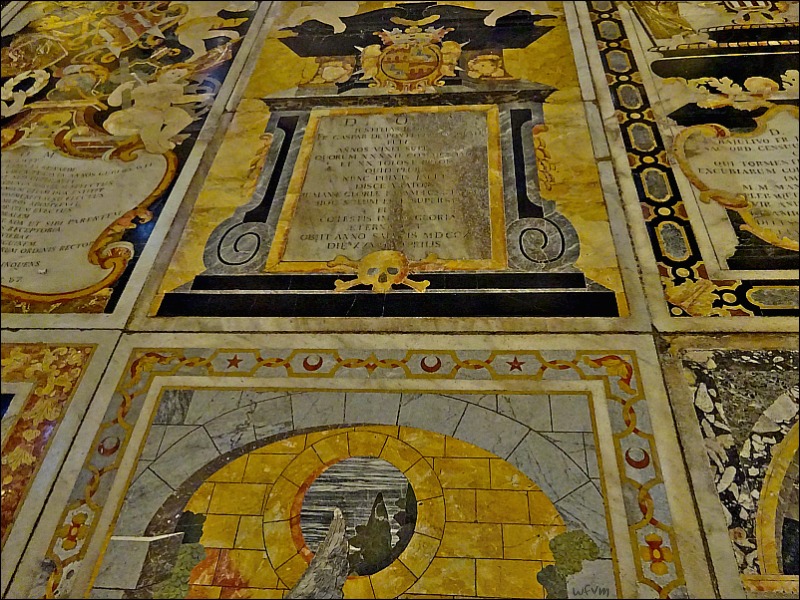 The cathedral floor is made up of 400 highly ornate inlaid pietra dura marble slabs. However, this is not just a splendid marble pavement floor, each slab represents a knight's tomb. 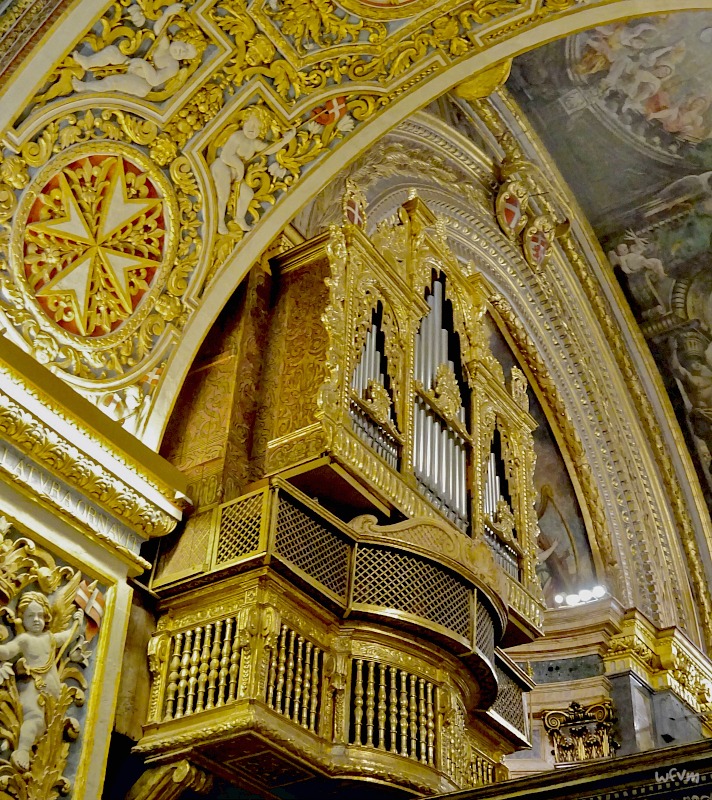 As mentioned in a previous post there are eight side chapels in the cathedral which belong to different langues. Having taken vows of poverty, chastity and obedience each knight then became a member of one of the eight langues based on their language or geographical origin 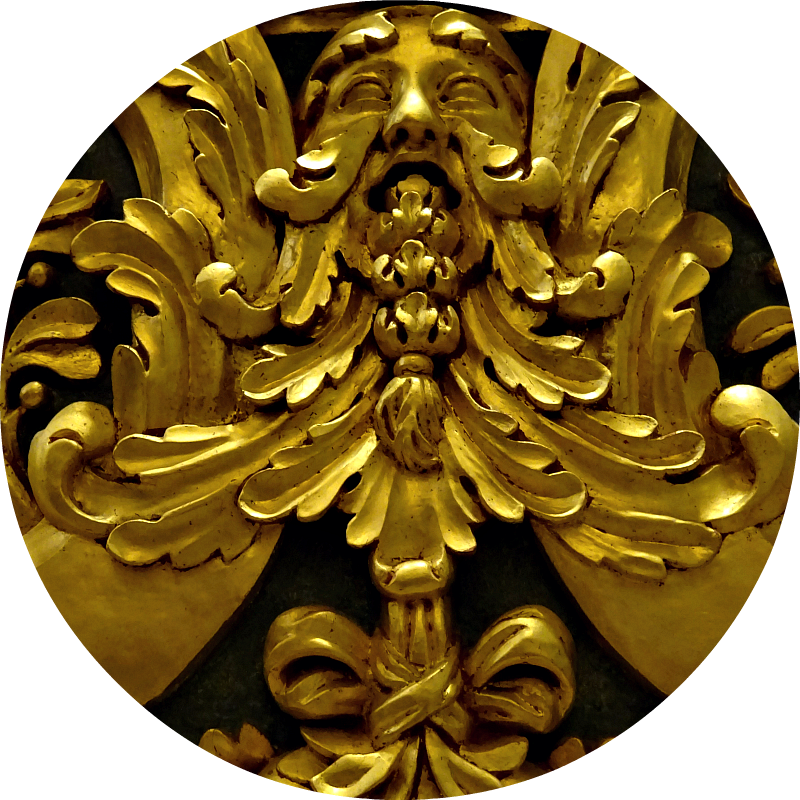 Three of the langues were French - France being divided in the C13th into France, Provence and the Auvergne.  The other langues were Aragon, Castile, Italy, Germany, and England. In Valletta each langue built an auberge where they lived together. They were headed by a pilier who had a set function: for example the pilier of Italy was the Grand Admiral: the pilier of Provence was the Finance and Ordnance Manager: the pilier of France was Head of the Order's Hospitals. Their overall head, the Grand Master, was elected for life and was subject only to the authority of the Pope 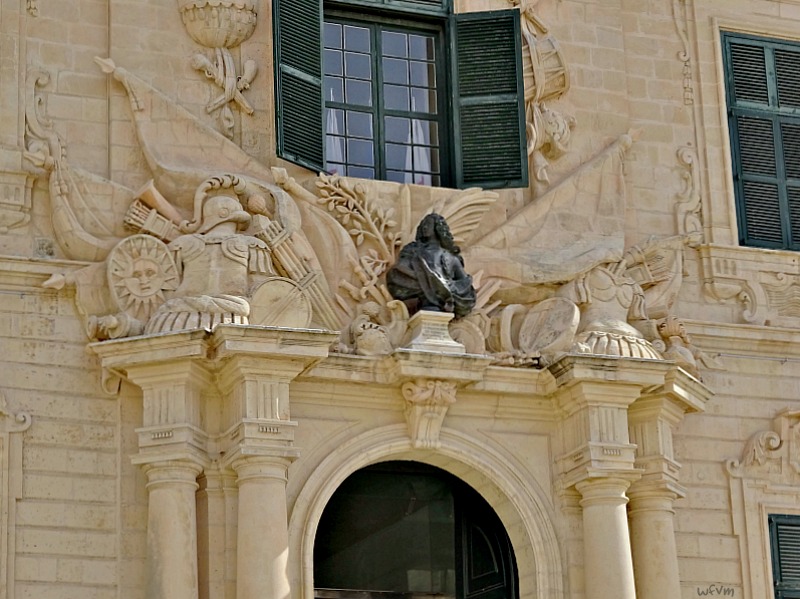 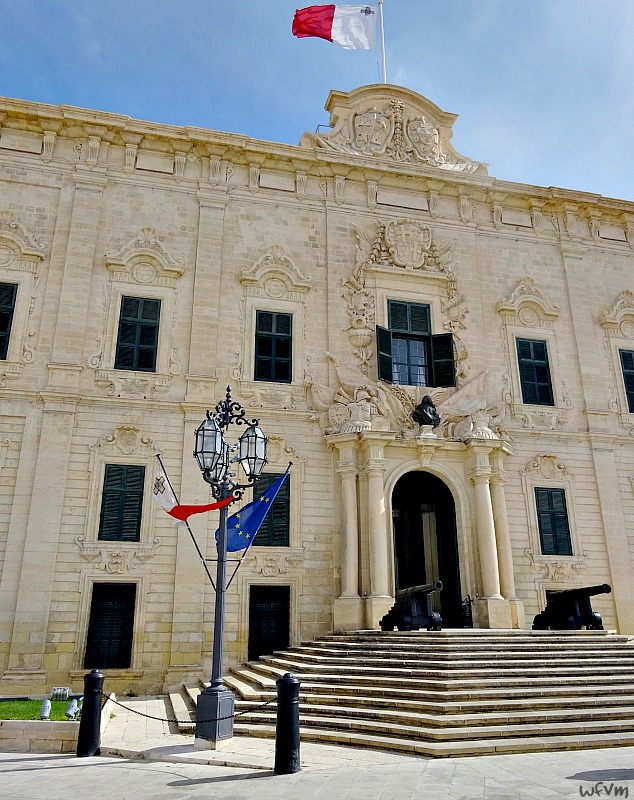 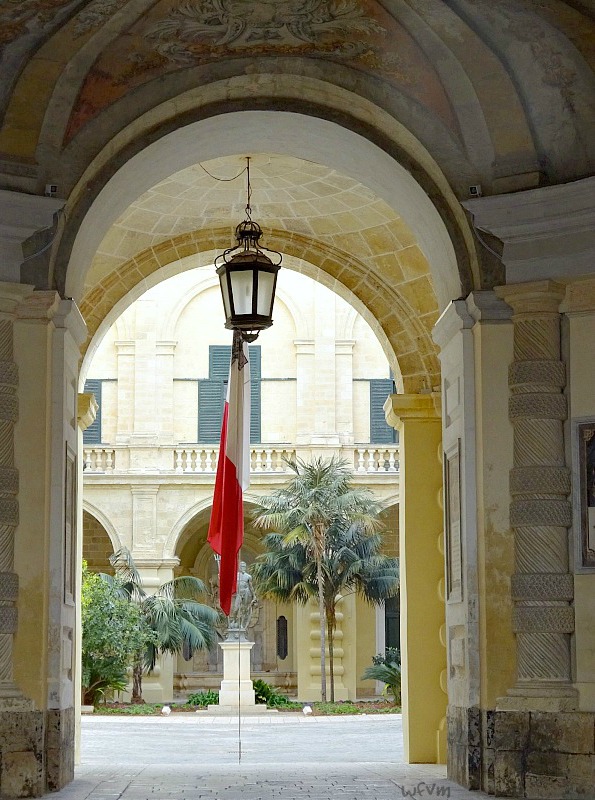 Entrance to the Grand Master's Palace, Valletta
As the years passed, corruption and internal dissent undermined the effectiveness and reputation of the Order. However, their place in history and their bravery in war have ensured their fame and the honorary title: Knights of Malta. With headquarters in Rome, the orgainsation today is known as the Sovereign Military Order of Malta
******************

As a postscript it was in the oratory of the cathedral that I saw the two magnificient paintings by Caravaggio. He was a key C17th Italian Renaissance painter of the High Baroque tradition but led a violent life which included street brawls, murder, threats of imprisonment, multiple exiles - his exile on Malta was self imposed, and his death at the age of 38 still remains shrouded in mystery although surrounded by many theories. 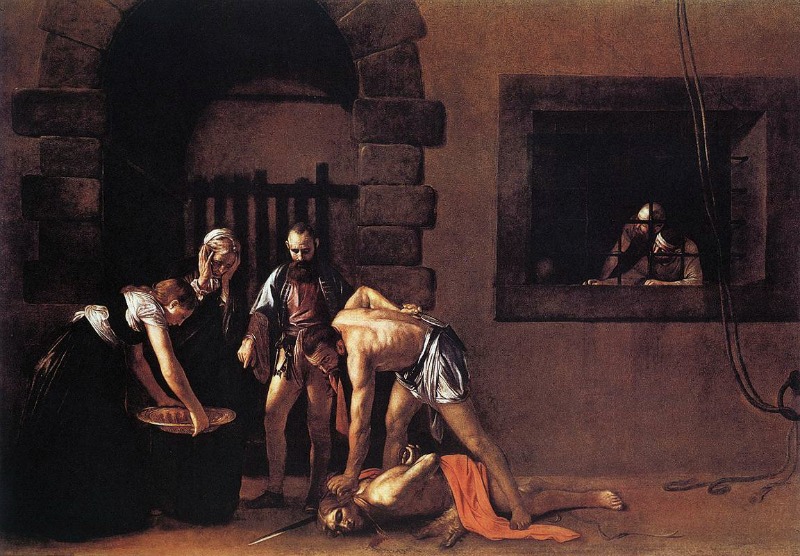 via
The Beheading of John the Baptish is a monumental piece of work. Painted with the artist's trademark high contrast chiaroscuro and realism, it captures St. John sprawled on the ground in a dark alley. This is the only work that Caravaggio ever signed, his name is written in the saint's blood. It is his largest work and also considered to be his greatest. 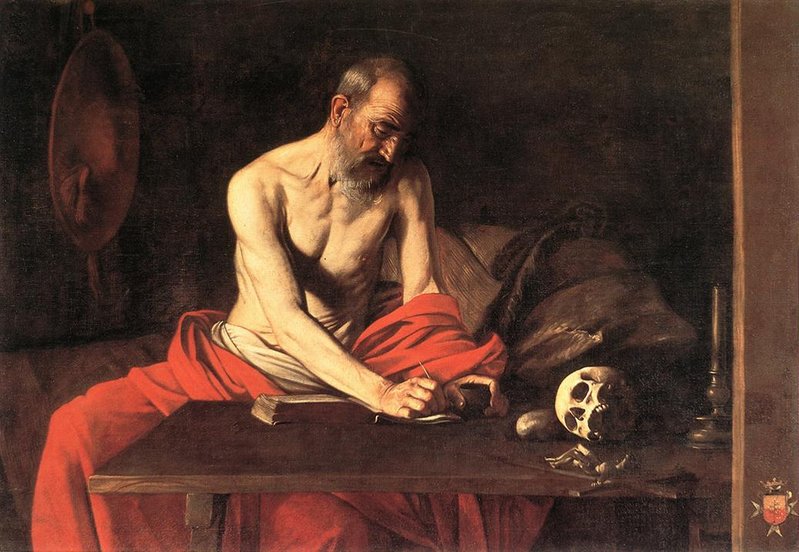 In contrast the painting of St. Jerome Writing is a softer much more benign, gentle image. The coat of arms seen on the painting are those of Fra Ippolito Malaspina, an important Italian knight within the Order, who had previously been the Admiral of the Papal Fleet - the painting was most likely commissioned by him, and then bequeathed to the Order on his death.
As soon as Caravaggio arrived in Malta he found favour with the Order by painting a series of portraits for them. Not only did he ingratiate himself with the Order but he was actually admitted to it as a knight.
For a time he was on his best behaviour in Malta, but with his anger problems it didn't take long before his true colours were revealled to the Order when he began fighting and brawling with the other Knights. He was hauled off to a subterranean cell in Fort St. Angelo which is located at the centre of the Grand Harbour in Valletta, and he was deprived of his artistic materials. He made a successful and very daring escape - the first prisoner ever to break out of the fort. In the dead of night he completed his escape by catching a boat to Sicily. The knights immediately relieved him of his knighthood.
Posted by Rosemary at 09:15