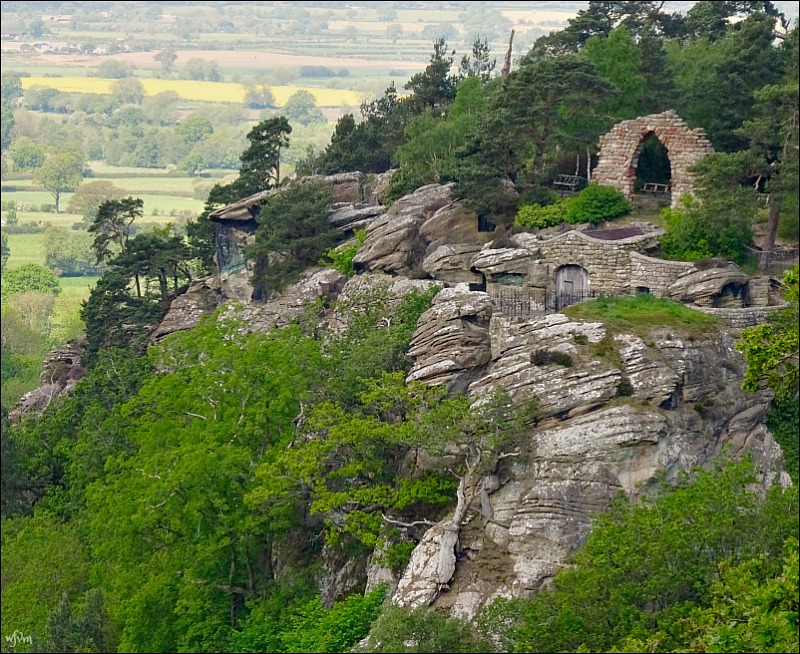 In the mid 18th century Sir Rowland Hill utilised the existing sandstone boulders and cliffs on his estate to create a naturalistic landscape. The School of Naturalistic Landscaping, called the 'English Style' sought to imitate nature by incorporating different natural features and displaying them to their best advantage. It rejected the straight lines and geometrical approach that had previously been the accepted rule when laying out gardens and grounds.
Sir Rowland began the process by creating trails and building follies, but it was his son, Sir Richard Hill, who eventually took over and completed the bulk of the landscape in 1783. By the time of its completion, Hawkstone Park was the most visited landscape in Britain and recognised as a masterpiece. 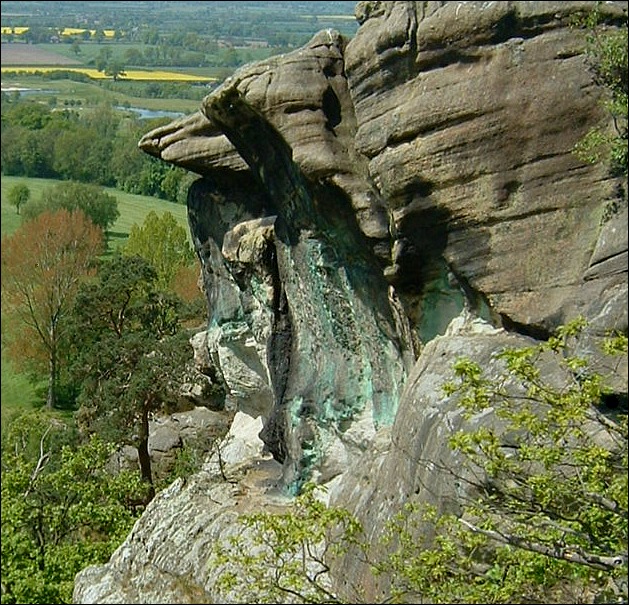 In the first image you may have noticed a substantial patch of blue staining on one of the rocks. This has long been considered to have been as a result of copper mining during the Roman occupation in Shropshire which lasted for almost 4 centuries.
2000 years ago, following the defeat of rebellious local tribes in the area, the Roman army founded a settlement that they called Viroconium which became the fourth largest Roman City in Britain. Today it is better known by the name of the small village called Wroxeter  that now occupies a corner of what was once the Roman city. 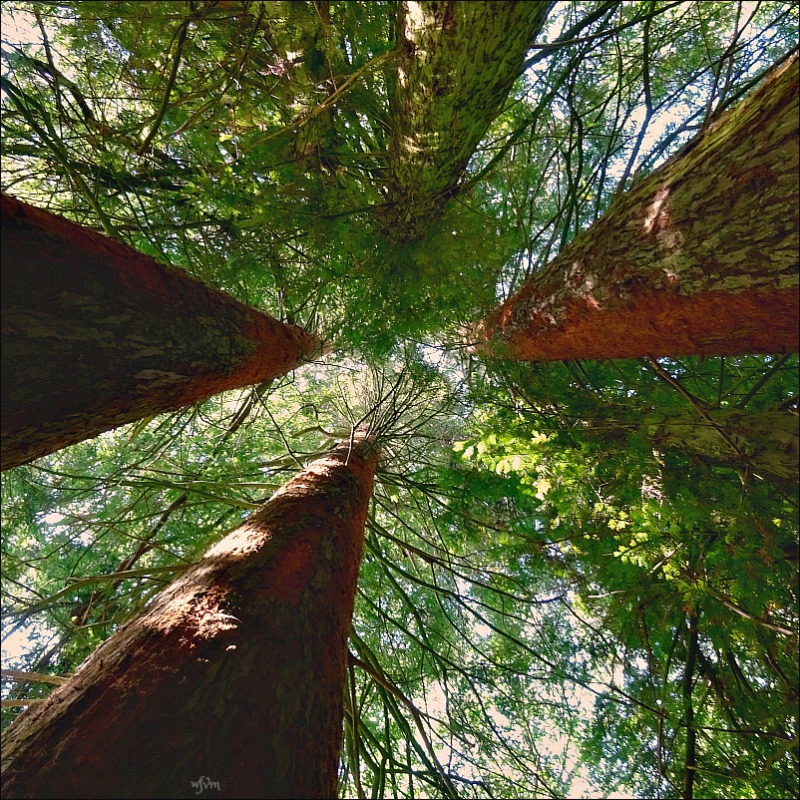 Californian Redwoods
Sir Richard had walkways built around the cliffs, and carved narrow tunnels and caves into the sandstone. He created follies, and had interesting bridges erected to continue the walkways over from one cliff to another. Many indigenous trees were planted along the tops and sides of the cliffs, and he also incorporated several newly discovered trees from around the world. 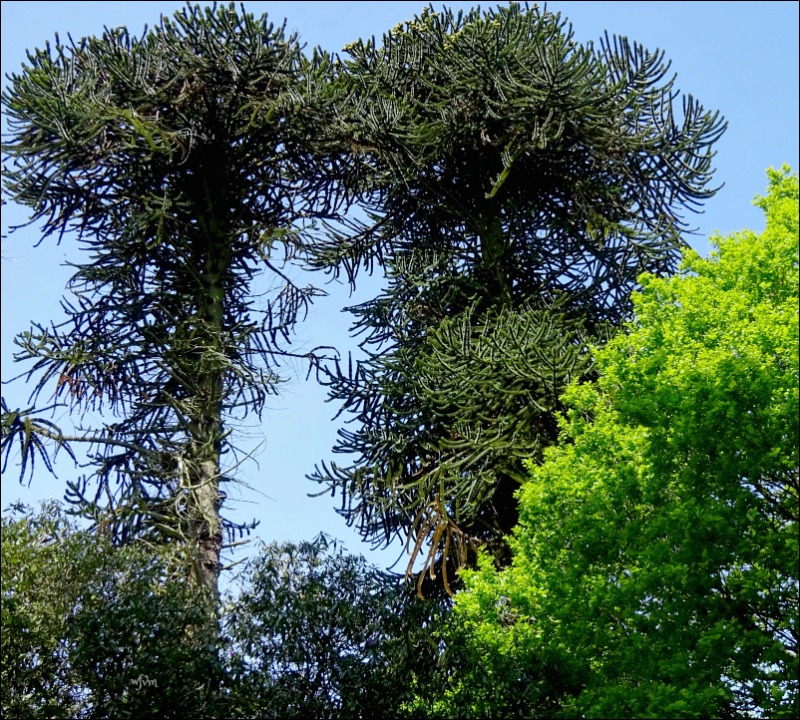 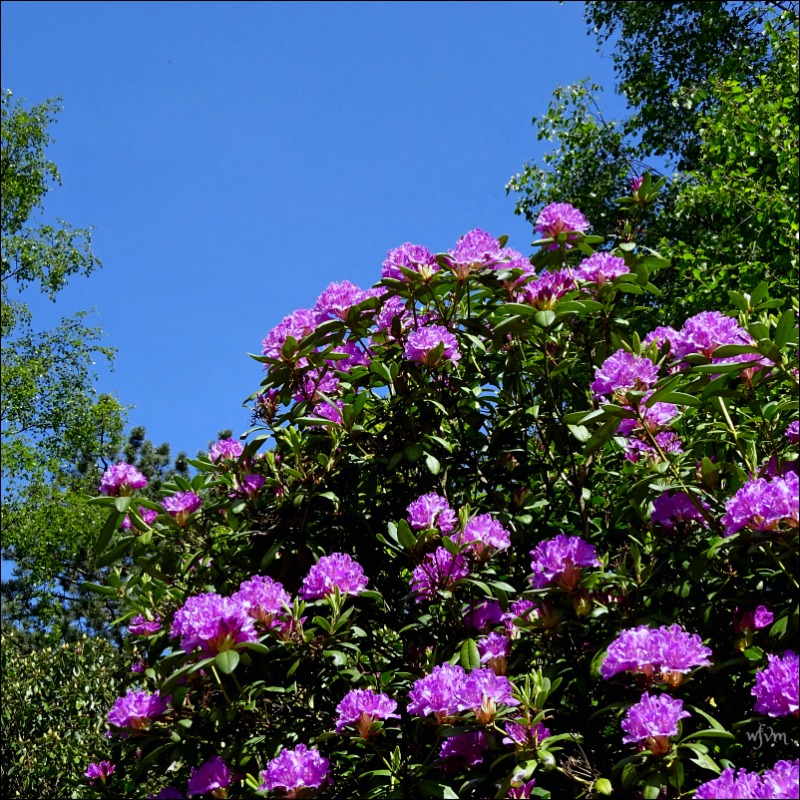 Today the Rhododendrons have grown to be almost as large as the trees that surround them. 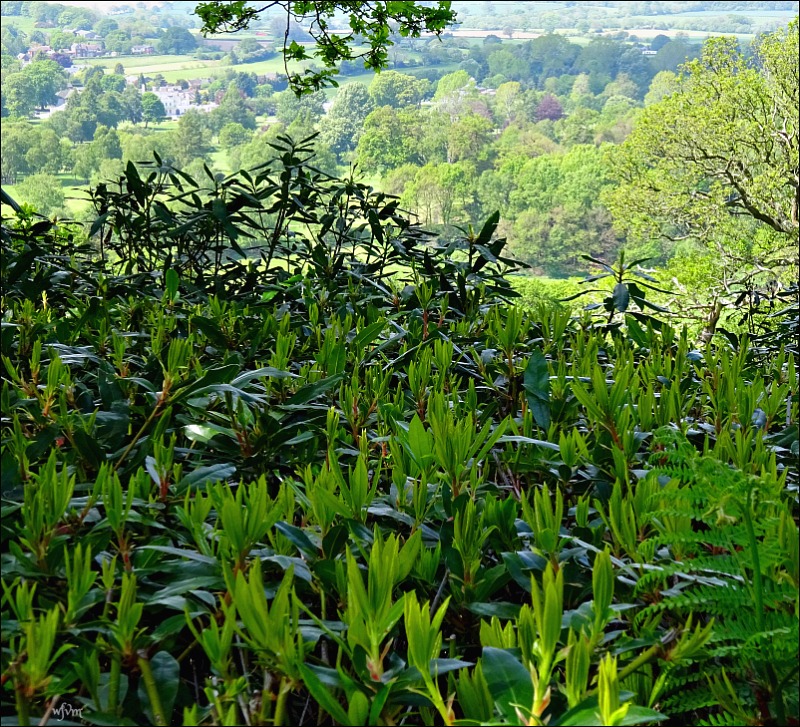 A substantial part of the walk in Hawkstone Park is very high enabling wonderful far reaching vistas, but parts of it can be quite challenging, and not for the faint hearted. You need strong legs, and good knees as there are lots of steep slopes, narrow walkways, and flights of steps encountered along the journey. 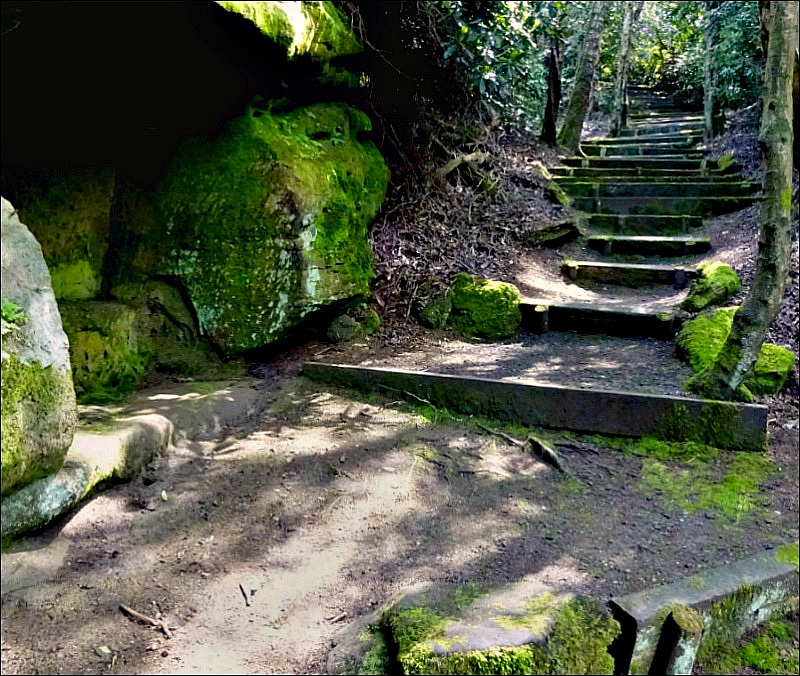 This is just a small section of a long flight of steps. It curves on much higher up than can be seen, and there are still more steps to negotiate downwards. Our leaflet informed us that this was the easy route! 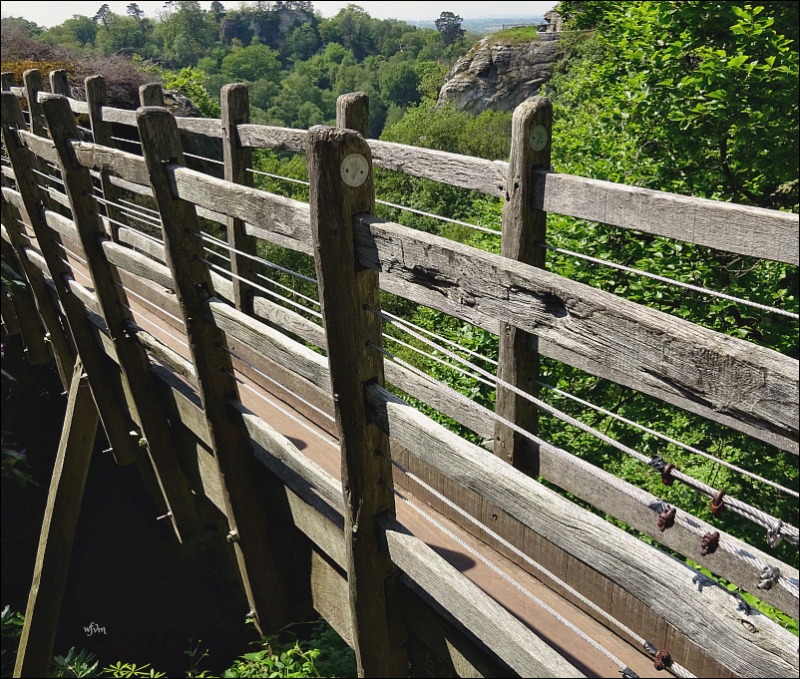 A typical Swiss style bridge would have been a familiar sight to many of the 18th and 19th century visitors. It is something that they would have encountered whilst travelling through Switzerland to Italy on their 'grand tour'. 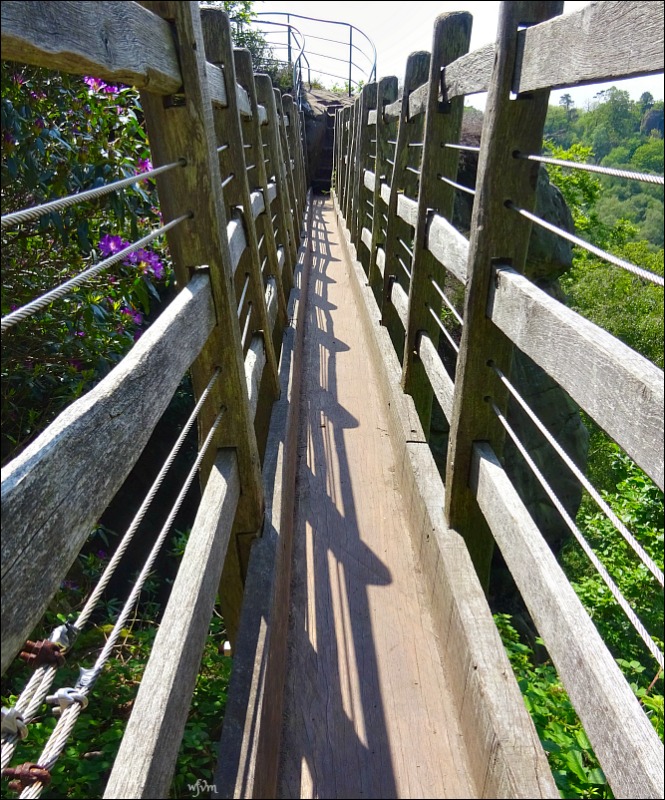 The bridge traversed a vertiginous ravine and was narrow to navigate. 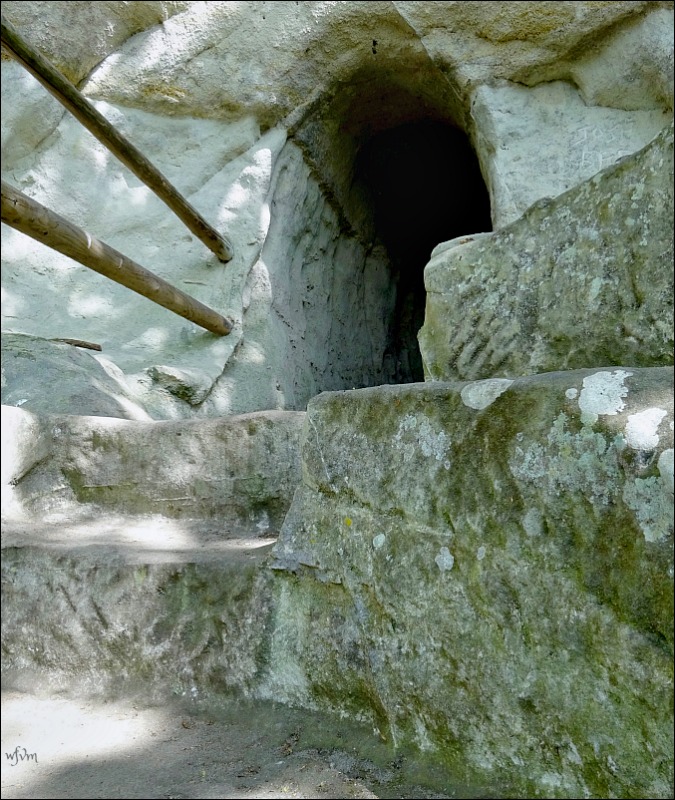 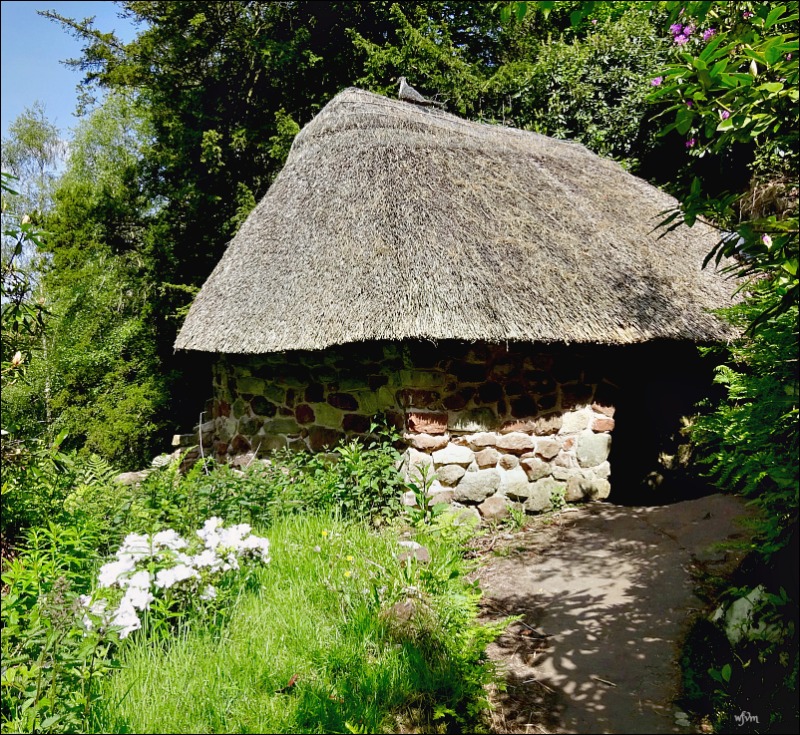 No 18th century landscape would be considered complete without it's very own hermit and this is the Hermitage where Father Francis would spend his summer months. Bare footed and aged about 90 years old, he would engage in conversation with the visitors about Life and Mortality, and recite to them from "Momento Mori". 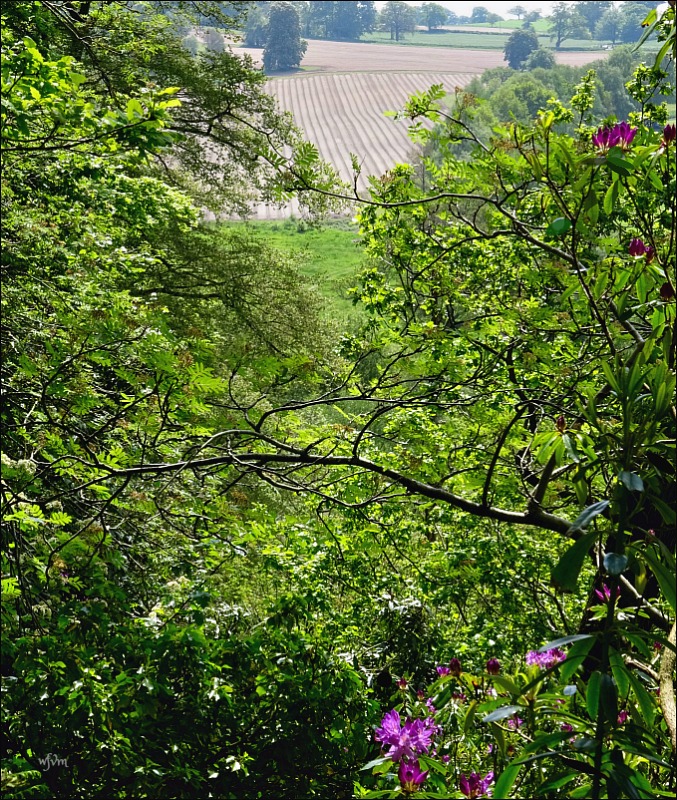 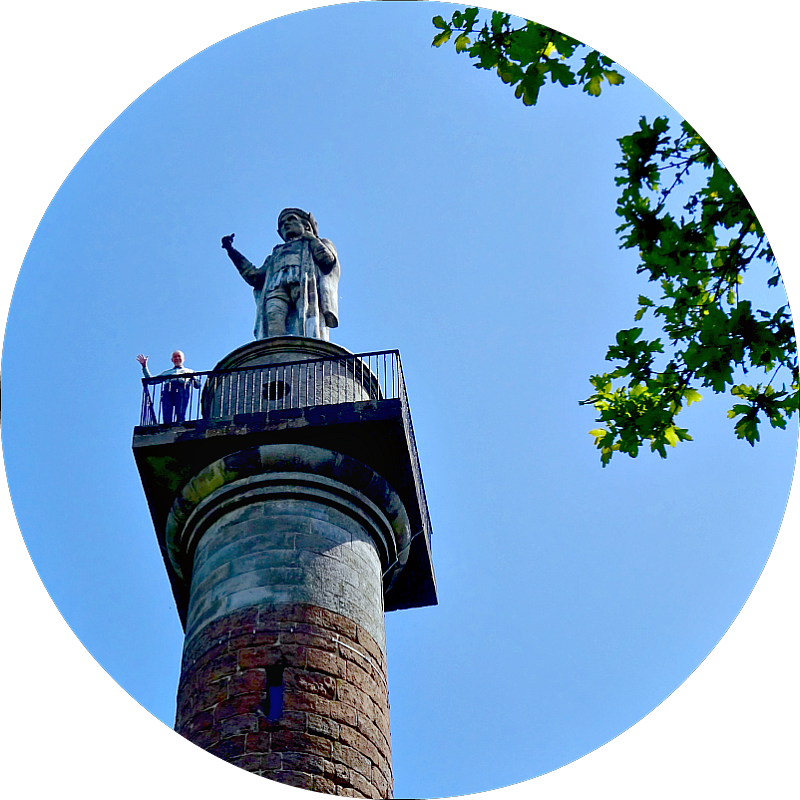 This Monument was erected by Sir Richard in 1795 to commemorate his ancestor Sir Rowland Hill, who was the first protestant Lord Mayor of London in 1541. It is reputed that on a clear day you can see 13 counties from the top. However, I decided that it was a step too far for me as we still had plenty of Hawkstone Park to walk before finally arriving back at the car.
Posted by Rosemary at 08:34