After several hours of travelling across the central Anatolian plains along the Silk Road to Cappadocia, evening was fast approaching. It was then that we had our first experience of the unique geology in the area by climbing down into a subterranean city. Along with its attractions above ground, Cappadocia is also world famous for its underground structures. There are many underground cities in the region, and almost all of them are interconnected through tunnels and passageways. One such city call Derinkuyu is made up of 12 layers, 8 of which are open to visitors. They are not places that are suitable for those who suffer from claustrophobia or who do not like to crouch low in small narrow tunnels. 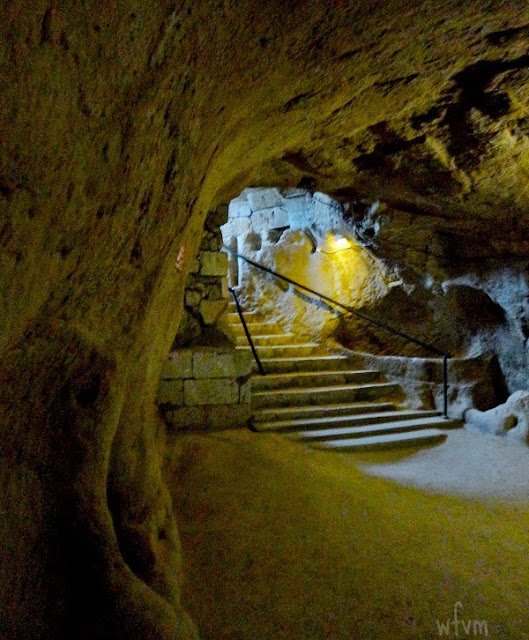 According to some archaeologists it is thought that the soft stone was first hollowed out by the Bronze Age Hittites c.1200 BC, others date them back even further in time. It is known that many of the levels were dug out by early Christians to use as hiding places before Christianity became an accepted religion. They have a vast defence network of traps throughout the many levels which are very creative. Many of the entrances have large round stones to block the entrance doors and holes which were mainly used as protection against the Romans. 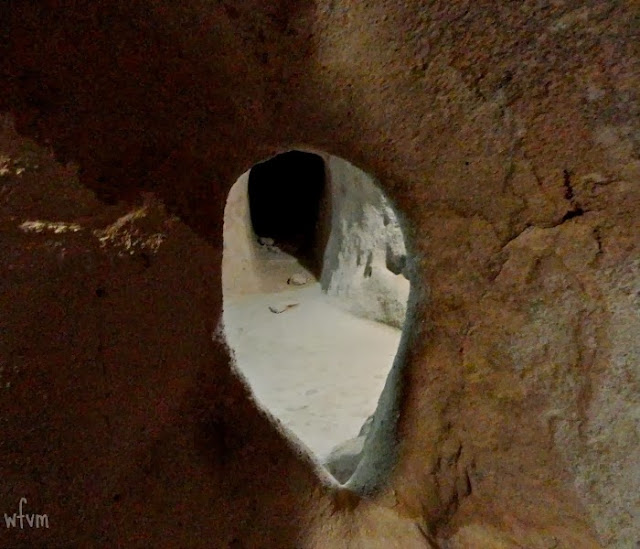 Moving through the passageways and tunnels you come across rooms that were used for cooking, holding wine presses, oil and wine storage, and livestock pens. The inhabitants could live for weeks or months underground until it was safe to emerge. 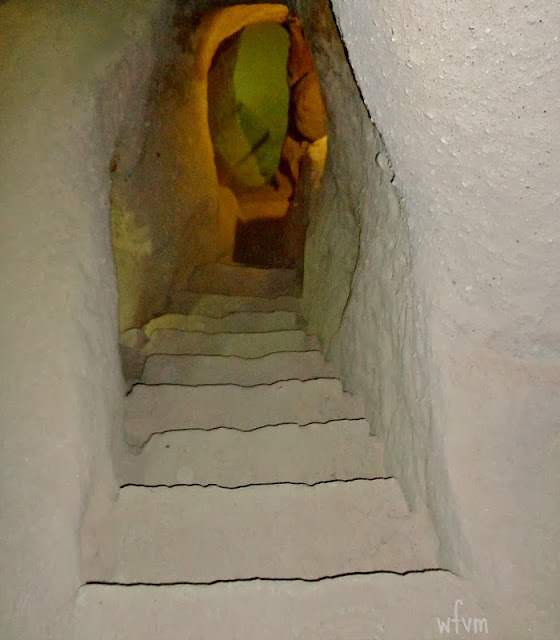 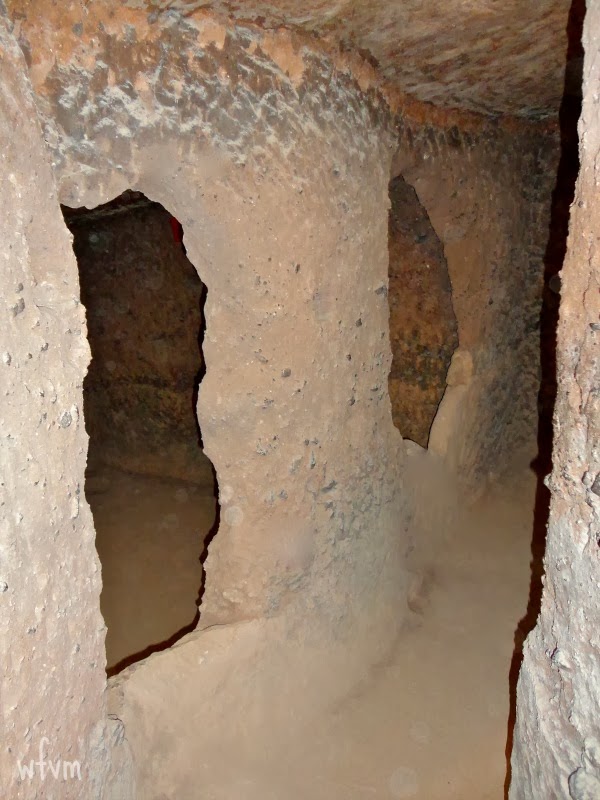 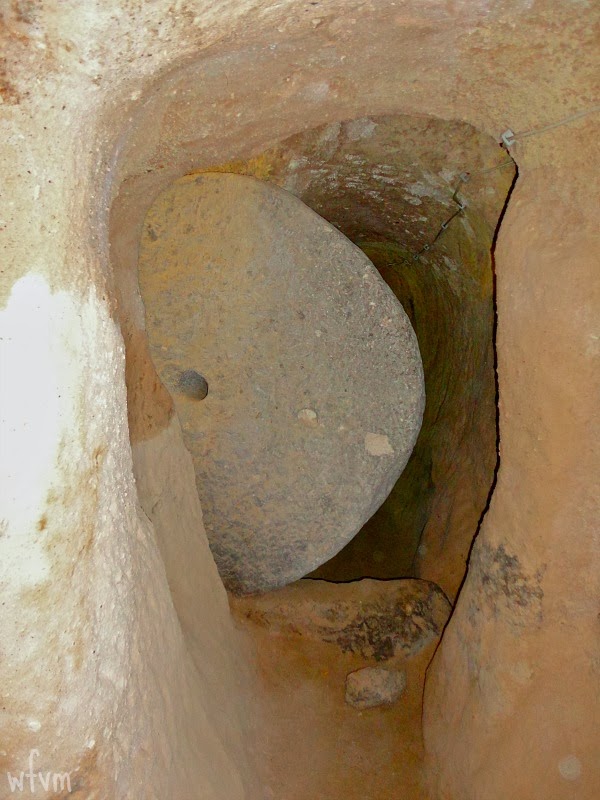 One of the protective stones that could be rolled across the passageway to prevent invaders.
It is interesting to reflect on how many people have lived in these subterranean cities over thousands of years. 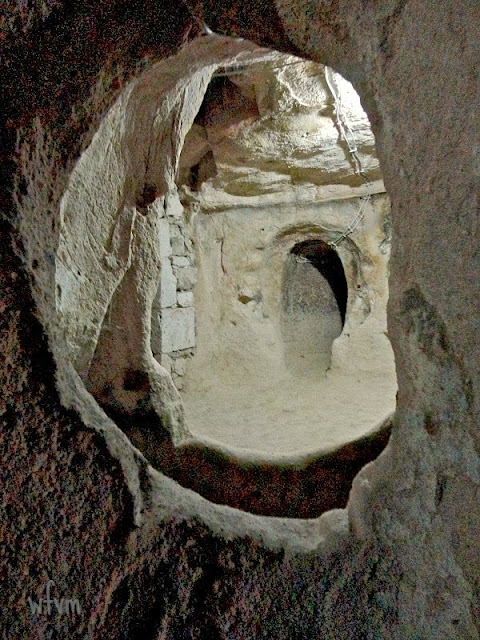 For the following three evening we stayed at a cave hotel - an attractive and very comfortable residence. 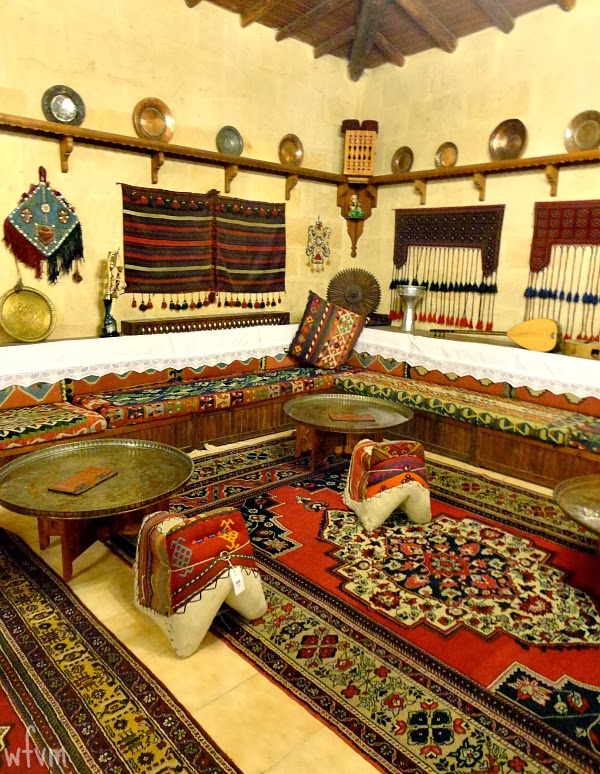 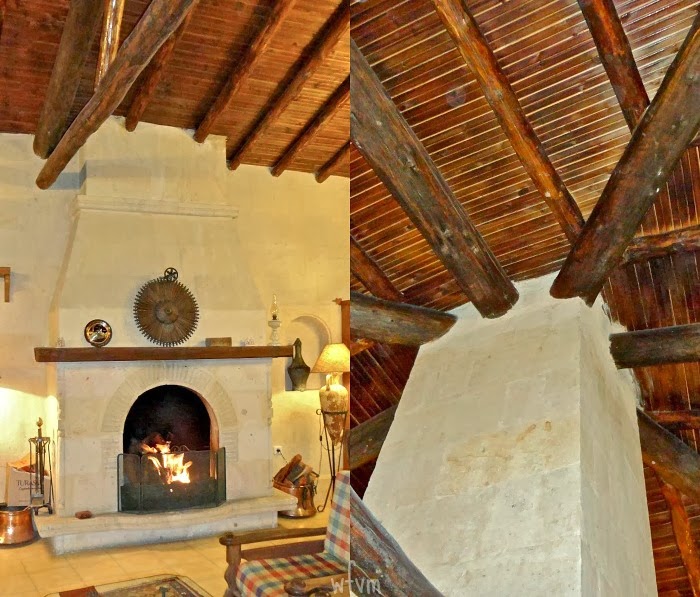 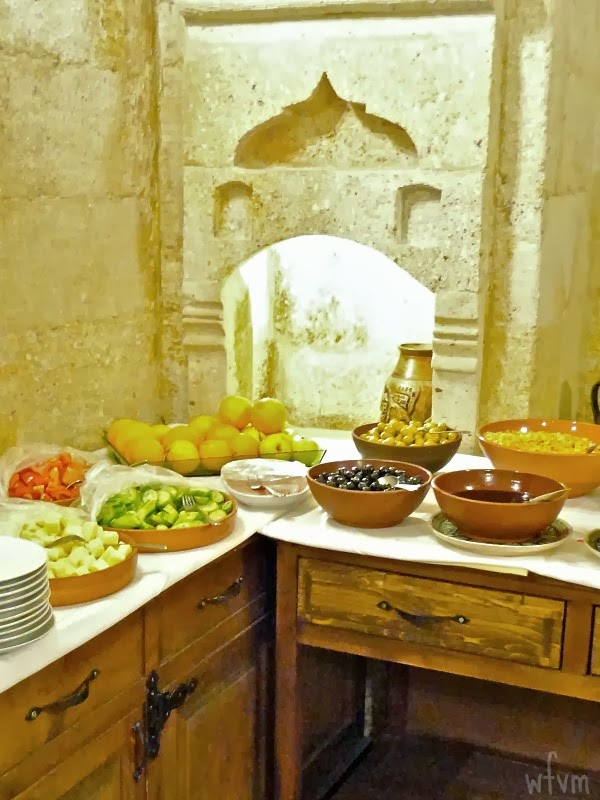 All set up for breakfast 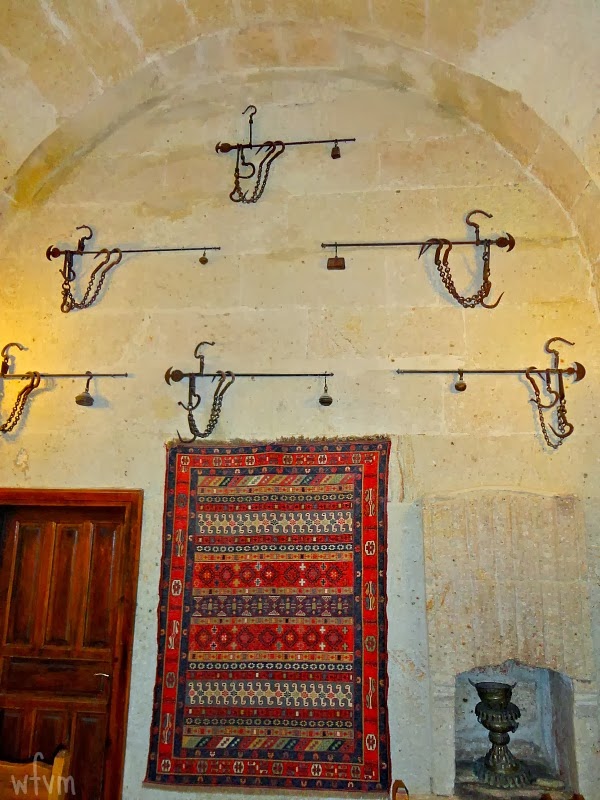 A wall in the Dining Room 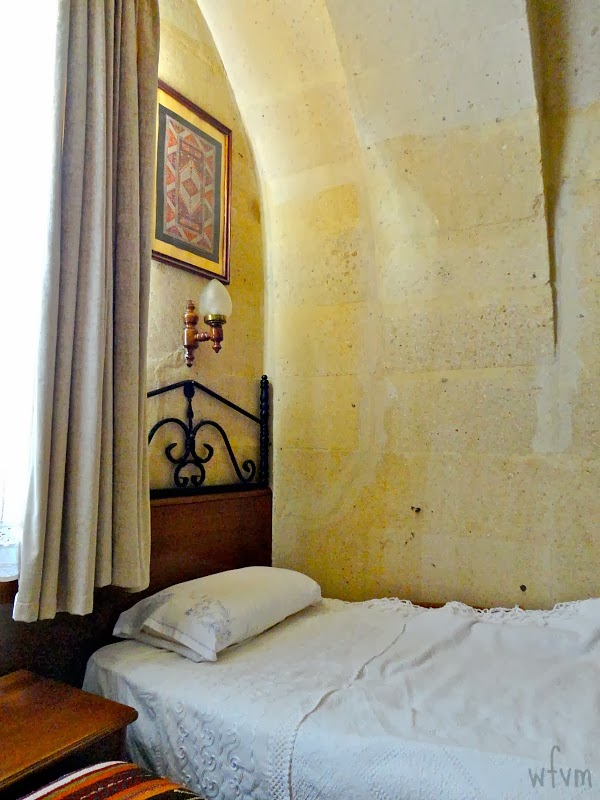 Corner of the Bedroom
Our next experience of cave living came when we were taken to the cave home of a local family. The parents were away with their son at the hospital, and had left their teenage daughter to show us around. 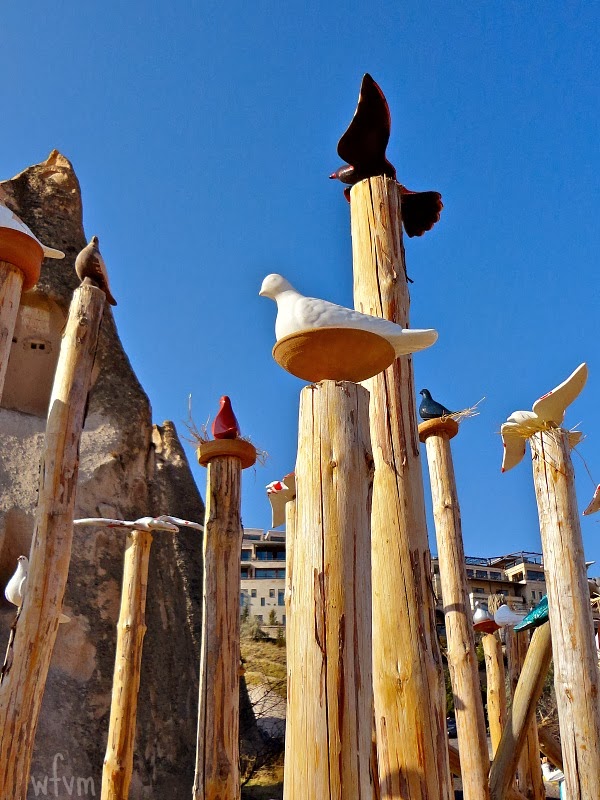 Speaking generally, gardens tend not to be a feature of Turkish homes. They will have some fruit trees, a vegetable patch, and may be somewhere to sit out of the sun. However, the owners of this Cave house had made a very unusual sculpture feature in front of their home which I thought was fun. 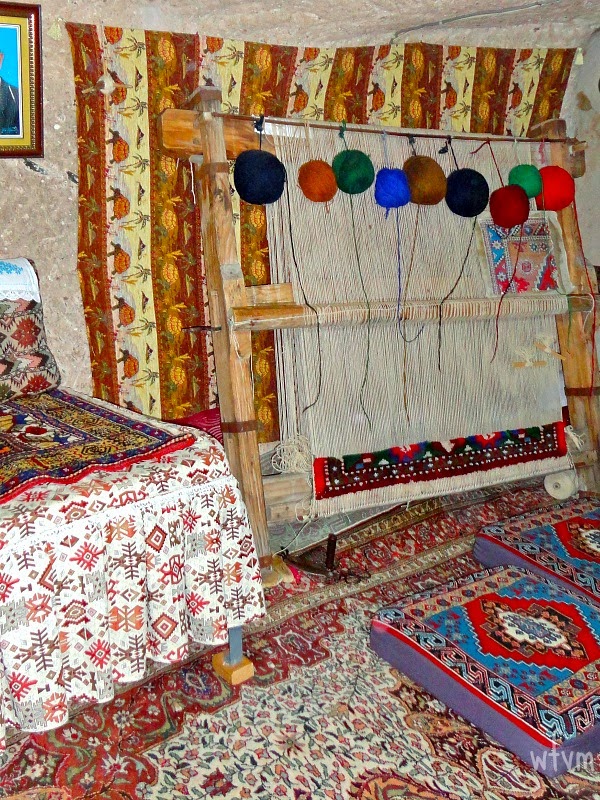 In the living room a carpet was being made which would probably take about 6 more months to complete. The floor was covered all over in several layers of carpets made by different generations of the family. It was a very cosy but decent sized room. The temperature inside remains fairly constant during both the very hot summers and the mild winters, but there was a stove which could be lit if it became really cold and snowed. Whilst we were there the temperatures were in the mid 20s but as soon as the sun went down it became cooler. 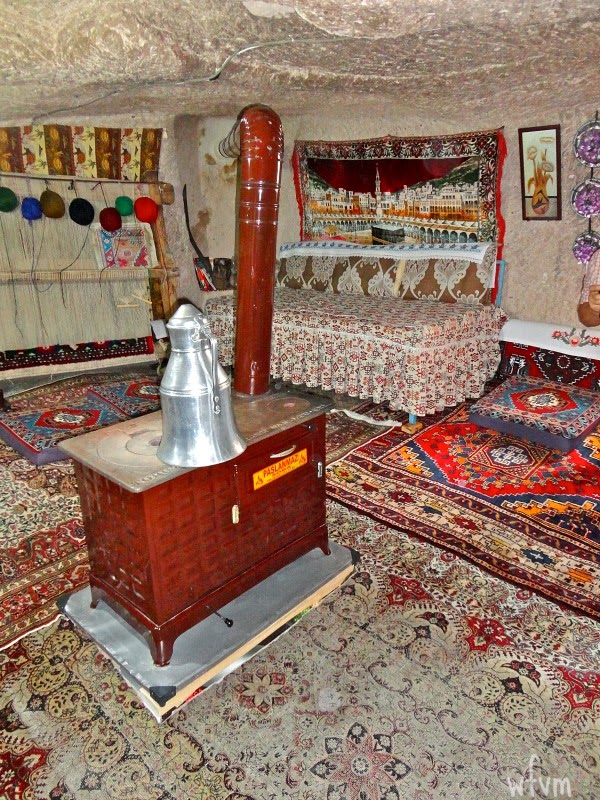 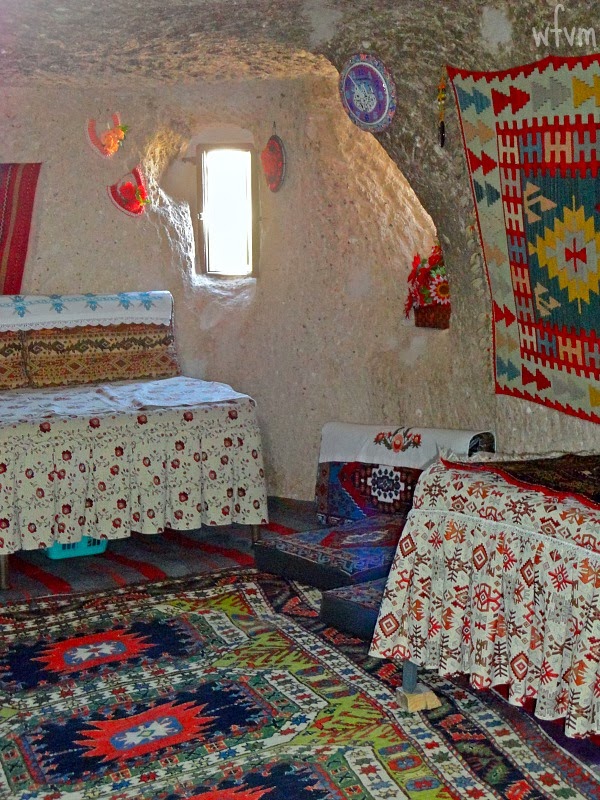 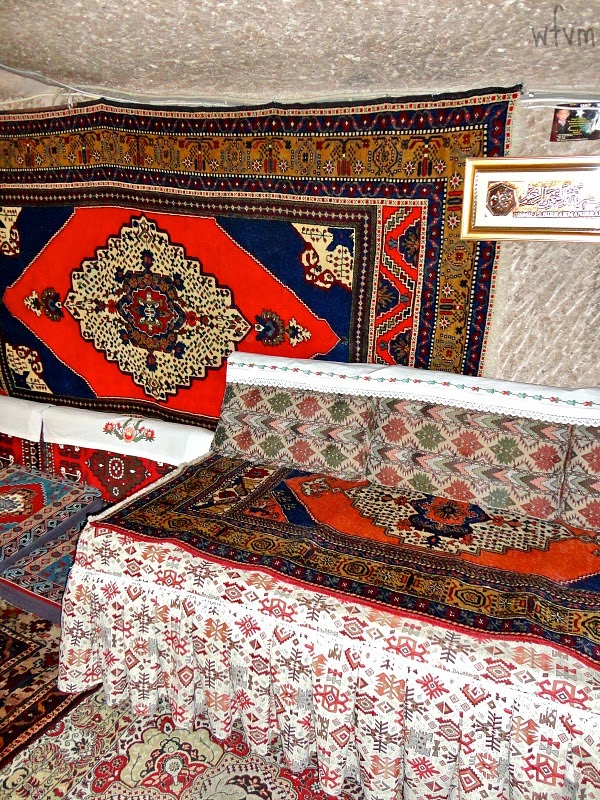 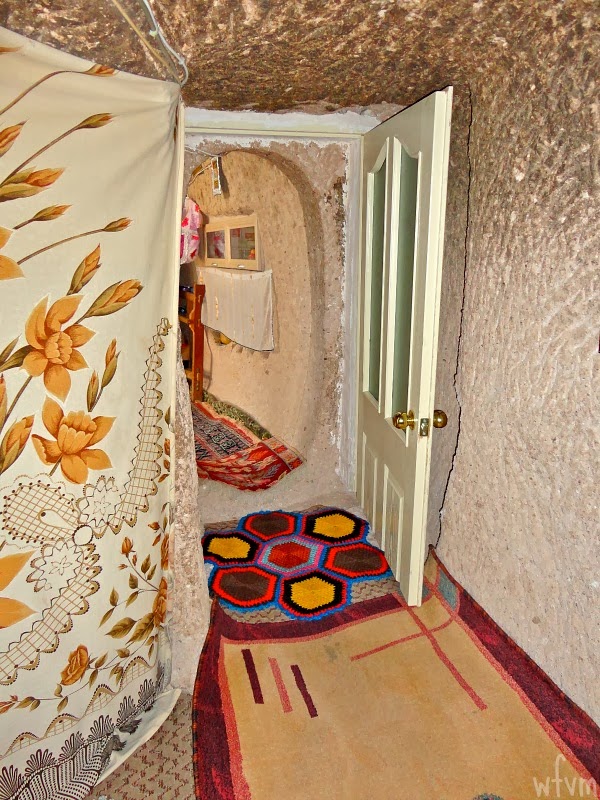 Doorway leading to the kitchen 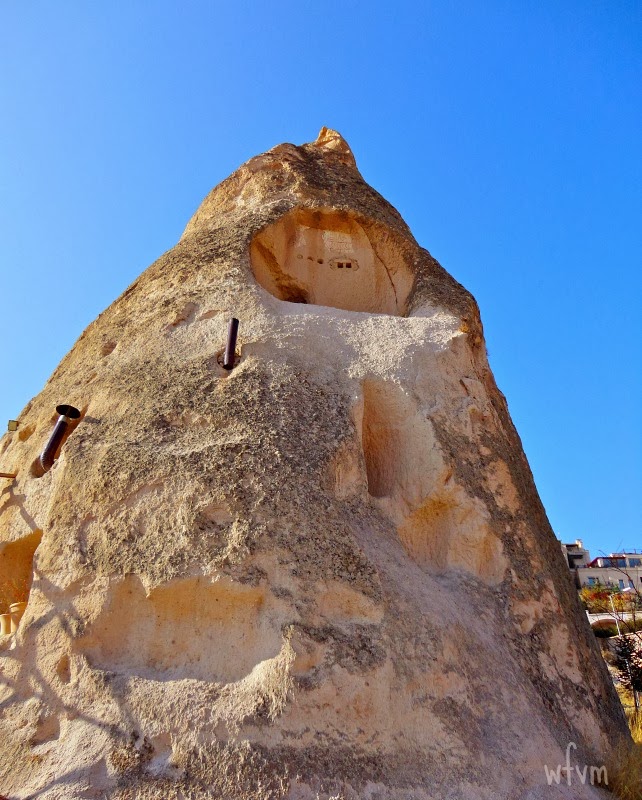 The outside of the cave house and its.... 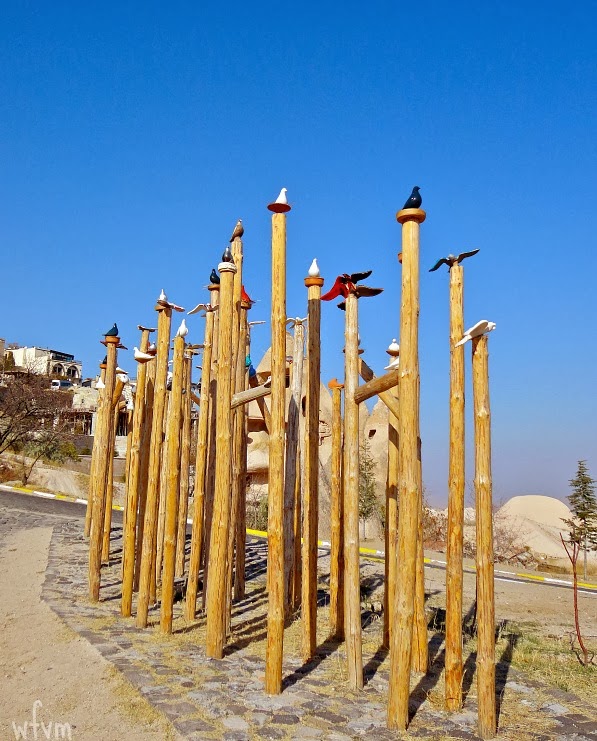