In the early 1990s H and I used to visit Paris on a regular basis. He was working for the UN and spent a considerable amount of time at UNESCO - IOC (Intergovernmental Oceanographic Commission). We would stay in a small hotel off Boulevard Garibaldi, handy for the metro and for H to get to work. When H had left I would visit galleries, museums or churches and explore different areas of the city. If it was a warm day, one of my favourite destinations was Pėre Lachaise cemetery. Setting off with my baguette for lunch, and armed with a cemetery guide, I would meander the labyrinth of winding pathways within its high walls.
Paris's most celebrated cemetery sits on a tree covered hill overlooking the city. The land was bought by Napoleon in 1803 from Pére de la Chaise, a priest, who was Louis XIV's confessor. Here are buried distinguished people such as writer Honoré de Balzac and composer Frédéric Chopin. More recently, singer Jim Morrison, and actors Simone Signoret and Yves Montand.
For me, however, the magic of the place are the tombs, many of which have been executed by famous sculptors. It is one of the most wonderful, free, open air galleries in the world.
Amongst my favourite tombs is that of René Lalique, which incorporates a piece of his exquisite glass that has been engraved with a repouseé crucified christ 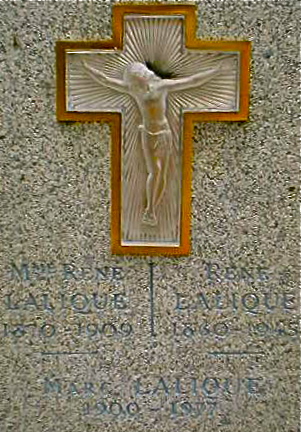 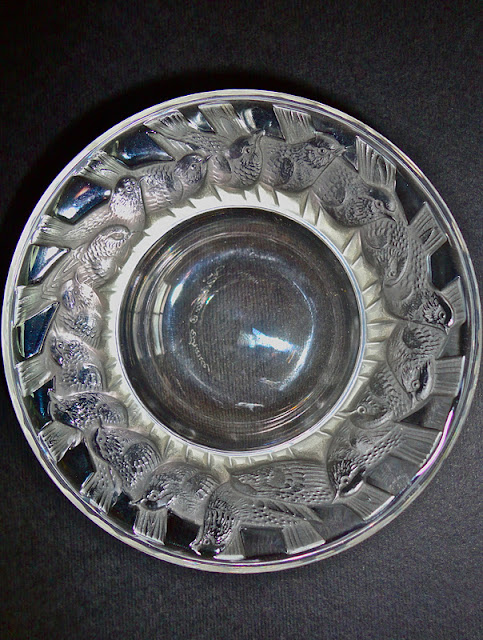 This Lalique glass dish with little birds around the edge is our own. 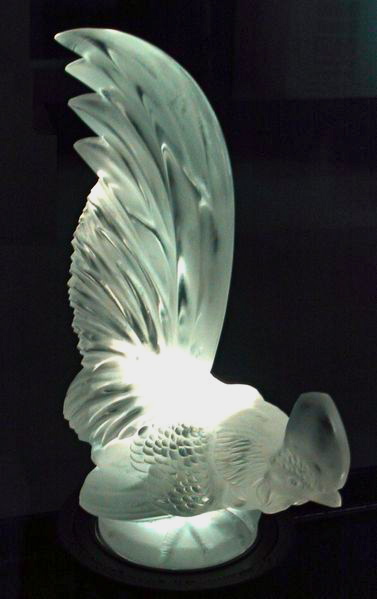 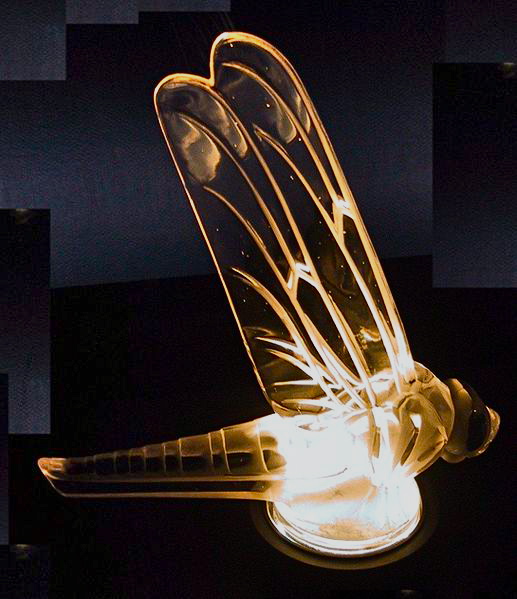 Two car mascots by René Lalique
both images courtesy of Chris 73 via wikipedia
The tomb of Ernest Caillat is rather special as it was created by Hector Guimard, who designed the much admired Art Nouveau entrances to the Paris metro. 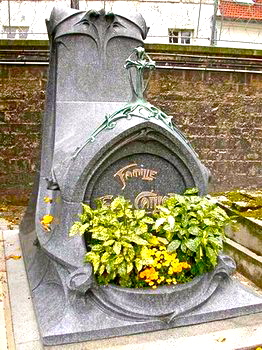 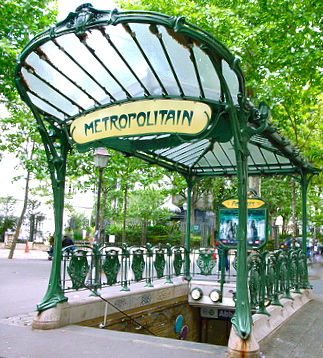 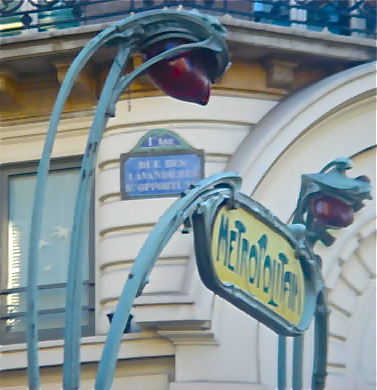 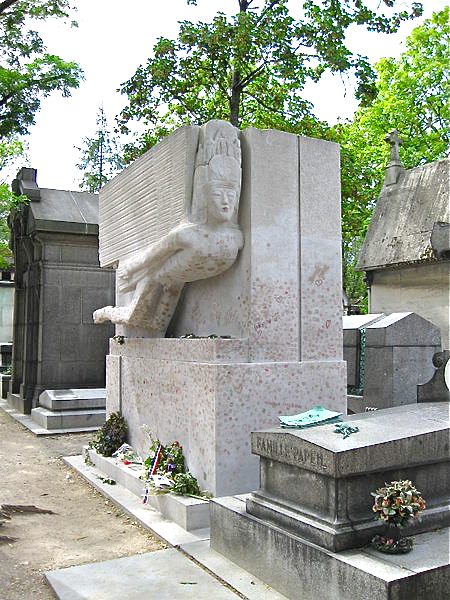 courtesy JHvW via wikipedia
Oscar Wilde's tomb by Jacob Epstein was not despoiled when I visited, rather the angel had red roses placed beneath it. Known as the flying angel, Epstein carved it out of Derbyshire stone. He was assisted by Eric Gill, who helped carve the wings. Gill also did the carving on the back showing the last four lines from Part IV of The Ballad of Reading Gaol by Oscar Wilde. On the photograph you can see the marks caused by lipstick grease penetrating the stone due to kissing it. The tomb has recently been restored and a glass barrier to shield the monument has been fitted.

Carving on the back of the tomb


Some do it with a bitter look,
Some with a flattering word,
The coward does it with a kiss,
The brave man with a sword! 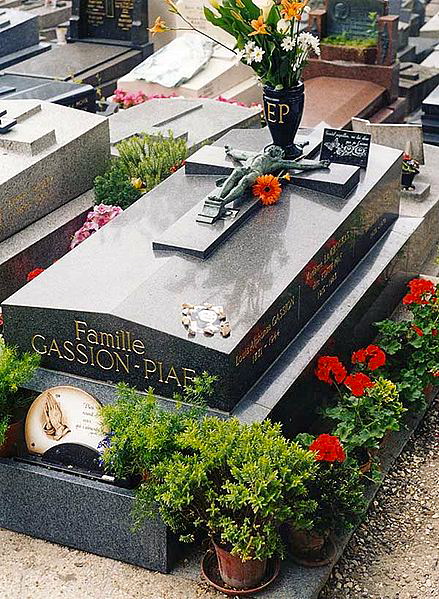 courtesy Adrian Pingstone via wikipedia
The grave of Edith Piaf - The Little Sparrow
Edith Piaf's grave is of no sculptural merit, but it is one of the most visited. It is always clean and polished, surrounded by lots of flowers in bunches and in pots. 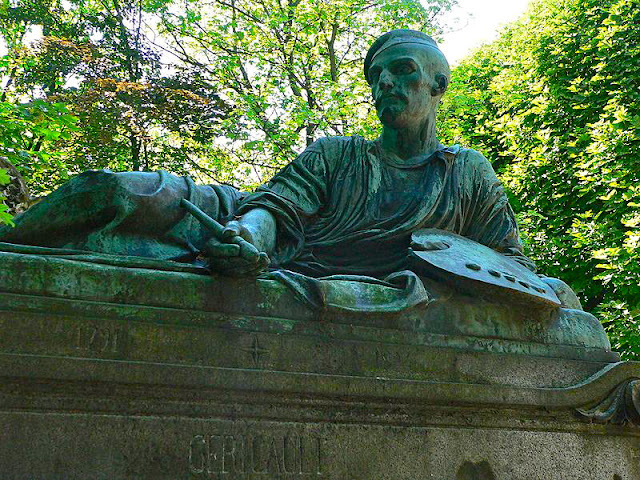 courtesy Rama via wikipedia
The tomb of Théodore Géricault, one of the pioneers of the French Romantic Movement, whose major work, The Raft of Medusa, is reproduced on the side of his tomb in a low-relief panel - unfortunately it cannot be seen on this photo. Géricault's bronze figure reclines, bush in one hand, paint pallet in the other, on the top of his tomb. The sculptor of both the relief and the figure is Antoine Étex. 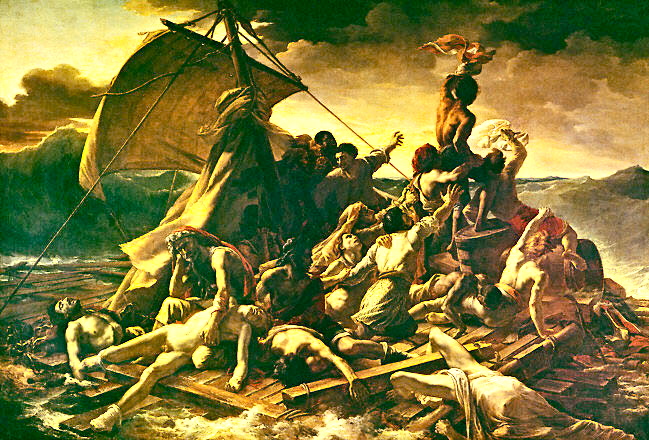 The Raft of Medusa by Théodore Géricault
courtesy wikipedia
This is just a brief glimpse of the cemetery. Next time you are in Paris, do make time to pay a visit. The cemetery is in the 20th arrondissement and covers an area of 110 acres. A guide to the cemetery can be obtained from the many little florist shops nearby or from the principal entries at Porte des Amandiers and Porte Gambetta. 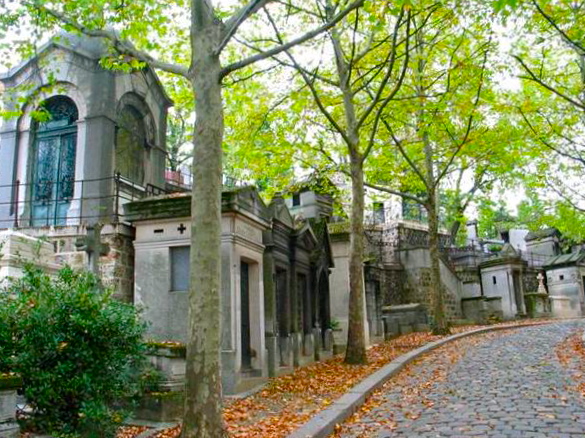 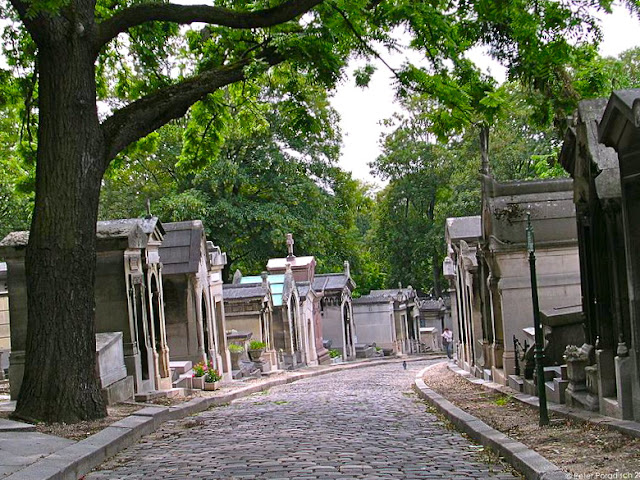 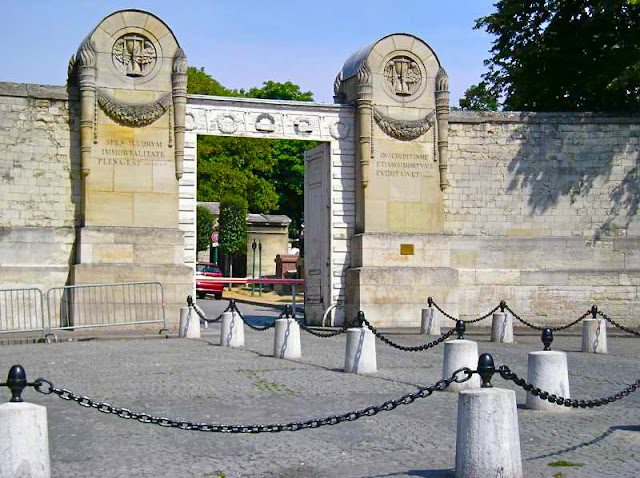 via wikipedia
One of the cemetery entrances
Posted by Rosemary at 08:28