More tales about MiL; some of you may recall that I have written about her previously.
H's parents lived on a farm, because of this they did not travel very far and holidays were few and far between. Farming is a daily commitment, the animals have to be fed and watered, and the crops and fields attended to. Their view of the world was limited to what they knew around them. Twentyfour hour news from all over the globe did not exist, and people's lives were very localised.
If the truth be known, MiL would have loved her son to marry a local girl and live nearby in Surrey, not hitch up with someone from the middle of the country - the Industrial Midlands, and known to them from their school days as the 'Black Country'.

Thorpe Cloud - Dovedale
Travelling to Derbyshire for our wedding was the longest journey they had ever made from Surrey. How surprised they were to find that the countryside was actually green and very beautiful.
Not only did H marry a girl from away, but following our wedding and honeymoon we moved to live in Glasgow, Scotland where H had been accepted at the university to do a PhD. MiL could not imagine anyone wanting to live so far away from Surrey and in such a distant cold place. Every Christmas my gift from them was a large mohair stole to keep me warm during the winter months.
Living in Scotland, it was necessary for them to visit us at some stage, and particularly after our son was born. This would prove to be a marathon undertaking involving a journey that took them 3/4 days. They travelled up in the month of June and arrived armed with their woolly jumpers and heavy sheepskin coats. Scotland was hit by a heatwave, and we spent most of our time at Loch Lomond, where MiL sheltered from the sun under the trees.

Loch Lomond
MiL became very anxious and worried about the plants in their Surrey garden. If it was this hot in Scotland, whatever would the weather be like in Surrey!!! It was no use explaining that just because it was hot in Scotland it was probably raining and chilly in Surrey. To her it was black and white - the north was cold and the south was hot.
When H was just a young boy, his mother was repairing his father's working trousers. She picked them up and shook them into the open fire to get rid of the bits of straw. His father had been out shooting on the farm and had left live cartridges in his pockets. All of the family had to make a quick dive under the table to shelter from the firework display of sparks and bangs until it was all over.
MiL learnt to drive when she was in her fifties. She had  a profoundly handicapped road sense, everybody else was in the wrong but her. She took her driving test at least 8 times, finally passing much to the chagrin of the family.

When they retired, H gave his parents our VW Beetle. He wanted them to have trouble free motoring and hoped it would see them through their twilight years, which it did.  It was baby powder blue, and had not done a very big mileage. Poor old Beetle was really put through the mill, karate chops on the wings, scratches and bumps all over the place. The trouble was MiL had spent 40 years riding her bicycle in accordance with her own anarchic rules. Riding on the right instead of left, she believed that everyone else should make way for her. She was used to traffic free quiet country lanes. She took our eldest son for a walk in his pram and when I went to meet up with them I discovered her walking along the centre of the road!!! It was fortunate that she never had a serious accident. Eventually the car was returned back to us for our son's to use after H's father died and she became too ill to drive. 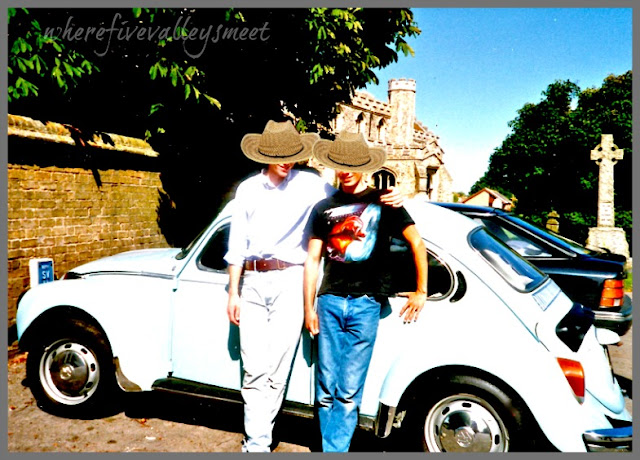 The VW resprayed and revamped following the removal of the scratches etc - (straw hats courtesy picmonkey)
Posted by Rosemary at 08:30