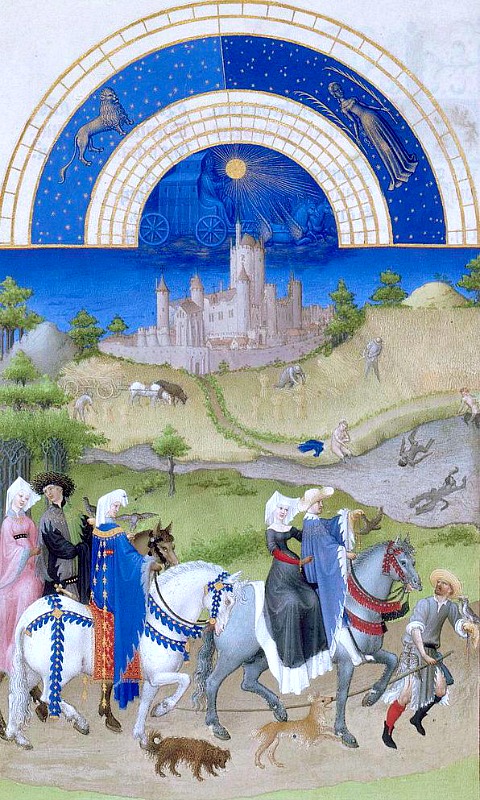 
August depicts a group of noble men and women on horseback with the men carrying falcons. They are accompanied by dogs and a Falconer. Behind them a small group of peasants are taking a refreshing dip in the river whilst others scythe the corn and place it in bundles to be collected by the horse and cart seen on the left. The Duc de Berry's Château d' Étampes can be seen in the background. 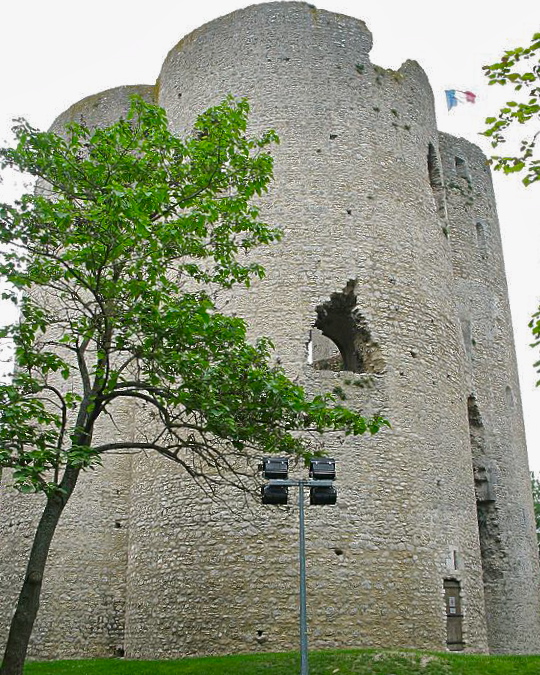 via
All that remains of Château d' Étampes today

The blue tympanum shows the star signs for August of Leo the lion and Virgo the virgin. Again the chariot of the sun continues to make it's yearly cycle through the heavens in the center.
In the July post for Très Riches Heures, I mentioned that I would describe the minerals and plants used to paint the manuscript.

Amongst the more unusual colours used to paint the manuscripts by the Limbourg brothers was vert de flambe, a green obtained from crushed flowers mixed with massicot (massicot is a lead oxide). A further green was made from malachite and wild irises.
Pink: extracted from the boiling down of red dyewood.
One shade of red was made from red oxide of lead; another, vermillion, produced from cinnabar or mercuric sulfide; a third made from red ocher.
An ultramarine made from crushed Middle Eastern lapis-lazuli and used for the brilliant blues, along with cobalt.
Violet: a colour extracted from sunflowers.
Yellows: one shade from a monoxide of lead, the other from arsenic trisulfide
White: made with white lead ore
Black: made from either soot or ground charcoal. They also used gold leaf and gold ormolu powder.
It is not surprising that medieval painters often died at a very early age from handling toxic substances such as lead, mercury and arsenic, and as many of you will be aware, artists do have a tendency to put brushes in their mouths to give them a sharp point whilst carrying out very fine details on paintings.
Month of September here.
Posted by Rosemary at 08:56