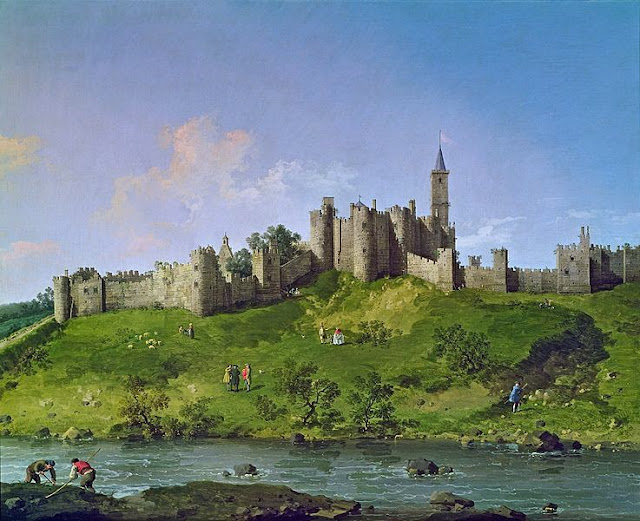 via
Alnwick Castle, Northumberland - by Caneletto
We used to lived just down the road from the Duke of Northumberland's Alnwick castle, which most famously took the starring role of Hogwarts in the first two Harry Potter films. Not so familiar is Syon Park and House, the London home of the Dukes of Northumberland for over 400 years. Having said that it has featured in numerous films, and TV historical dramas - The Madness of King George, The Wings of the Dove, Emma, The Avengers, Gosford Park, Love in a Cold Climate, to name but a few. It sits in its own parkland literally across the River Thames from Kew Gardens, and when visiting it is hard to believe that it is barely 10 miles from central London. 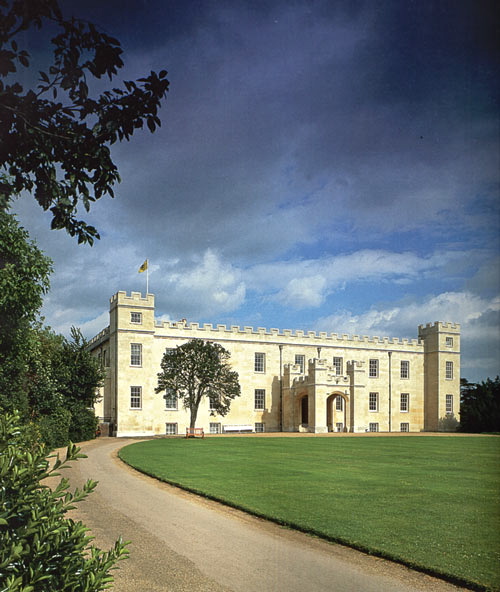 Syon House
When we left Strawberry Hill ( previous post) we travelled on to Syon House. No interior photographs were allowed in the house, these are via their website.
The 1st Duke and Duchess were determined to make their mark on Syon Park and instructed Robert Adam, the Scottish Architect to completely redesign the interior of the house. Adams refurbished the house in the Neo-classical style, and it is said that at Syon the Adam style was actually initiated. The house is feted as Adam's earliest English masterpiece. 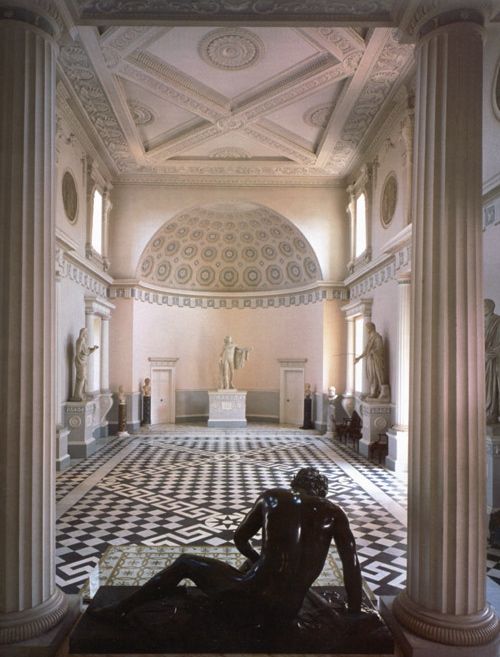 The Great Hall was based on a Roman Basilica - Adam's aim was to create a palace of Græco-Roman splendour to welcome the Duke's guests. 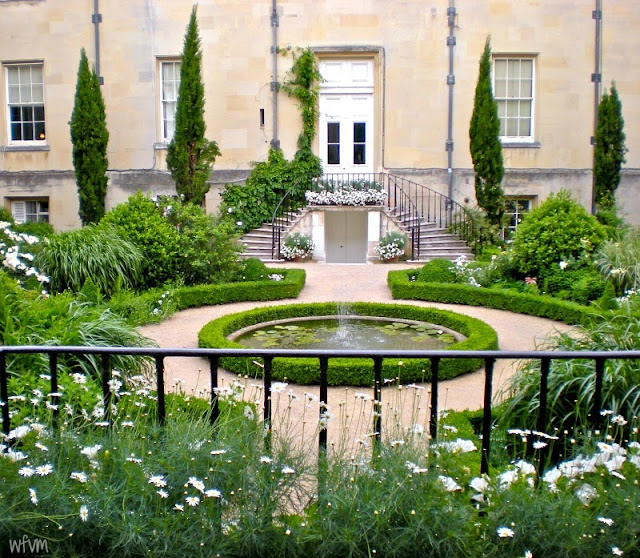 Opposite the entrance door to the Great Hall is another doorway leading out into an enclosed courtyard. 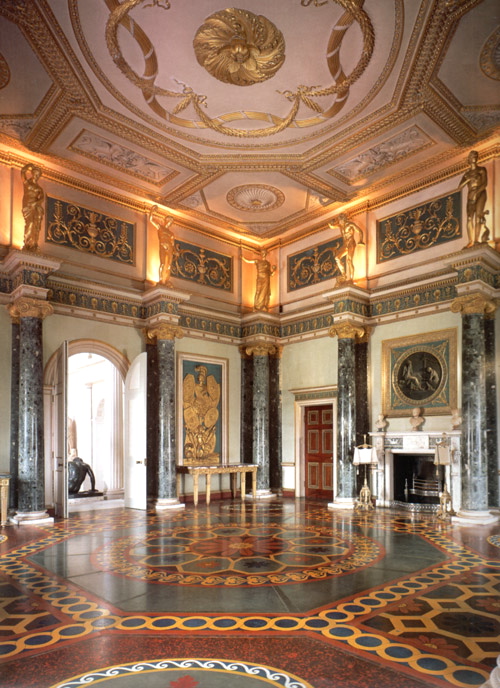 Leading from the Great Hall, the Ante Room is in great contrast. Decorated in a rich riot of coloured marble and statues of gilded gods supported on antique green marble coloumns which look down on the scagliola floor. 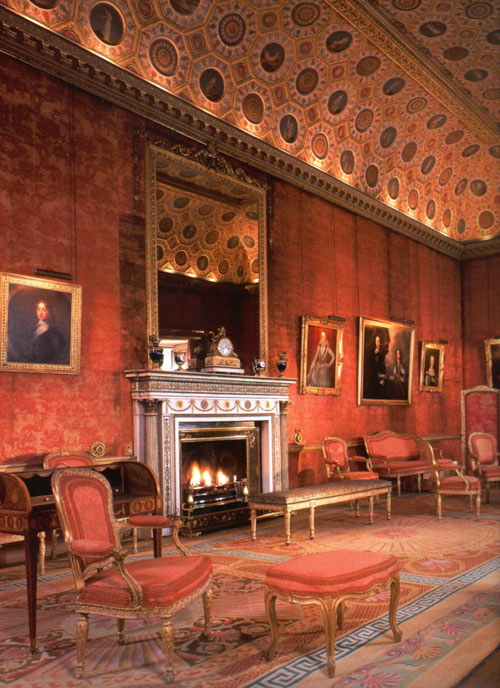 The ceiling of the Red Drawing Room has 239 medallions painted by Cipriani. The room also houses a very rare survival, an Adam designed carpet, signed and dated by the maker Thomas Moore in 1769. Crimson silk from Spitalfields makes a rich backdrop. The silk probably having been made by the Huguenots who fled from France at the end of the 17th century into the 18th century. It is possible to just make out a Sir Peter Lely painting of King Charles l and his second son, the Duke of York.

via
King Henry Vlll - by Hans Holbein the Younger

There is a rather gory story about King Henry Vlll connected with Syon House. In 1547, the King's coffin was brought to Syon on its way to Windsor for burial. It burst open during the night and in the morning dogs were found licking up the remains!!! This was regarded as a divine judgement for the King's desecration of Syon Abbey. 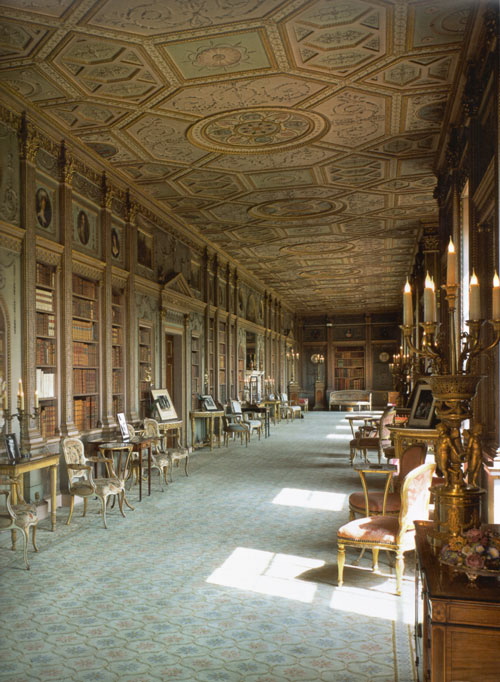 Adam's genius is revealed in this 136ft Long Gallery. Its original Jacobean wood panelling was replaced by delicate plasterwork and "finished in a style to afford variety and amusement" especially for the ladies. From the eleven windows there is a wonderful view over the last tidal water-meadow on the river Thames. 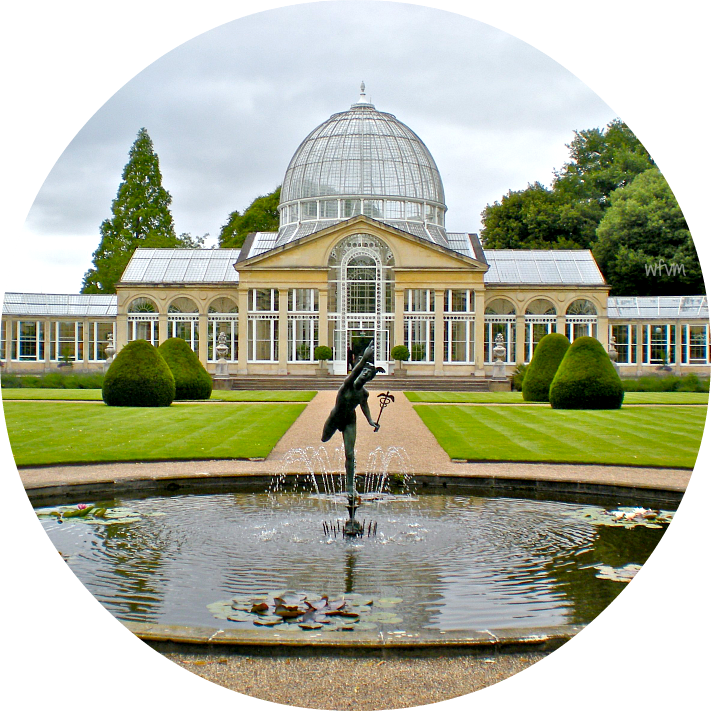 The 200 acres of parkland were designed by Lancelot 'Capability' Brown over 20 years from 1750. There are 40 acres of gardens and an ornamental lake. However, the crowning glory of the gardens is the Great Conservatory. The 3rd Duke commissioned Charles Fowler to build it in 1826, the first of its kind to be built out of gunmetal, Bath stone and glass. This conservatory inspired Joseph Paxton in his designs for the Crystal Palace. 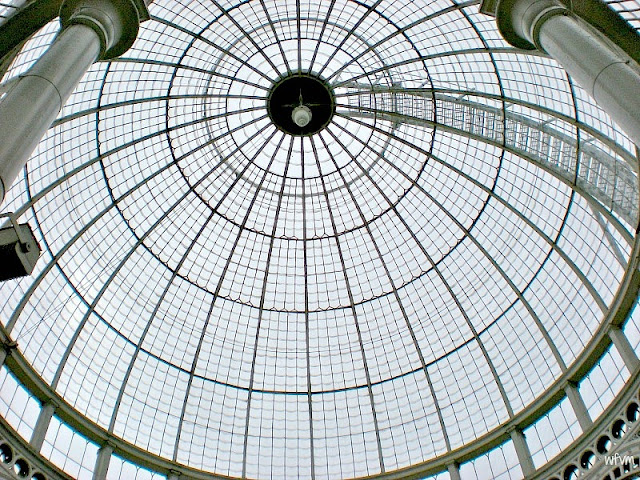 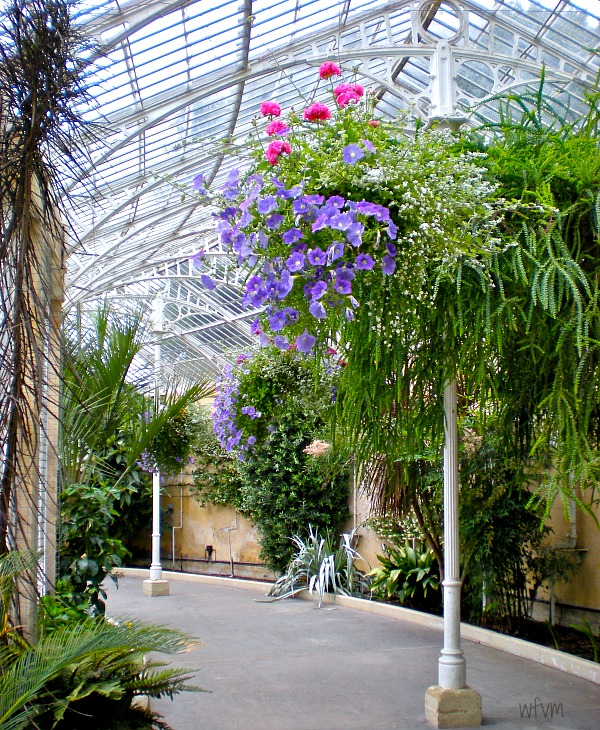 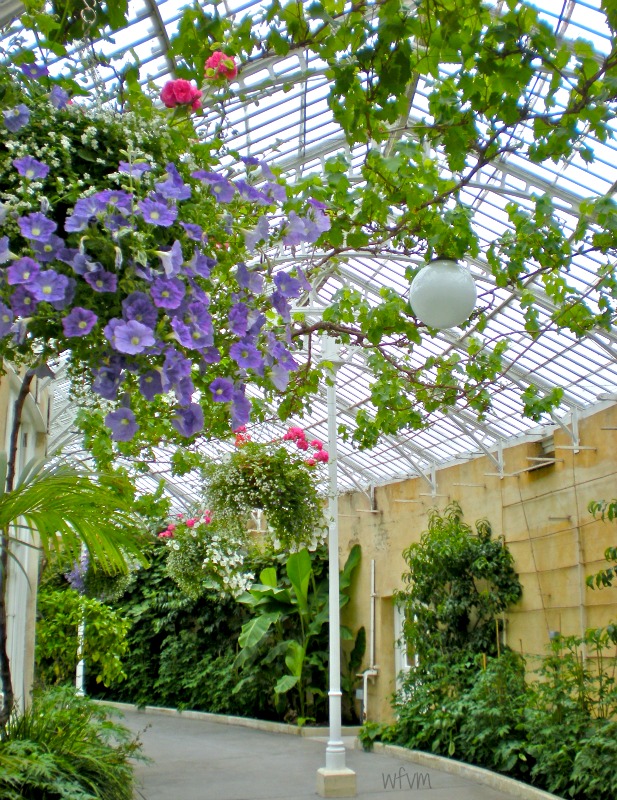 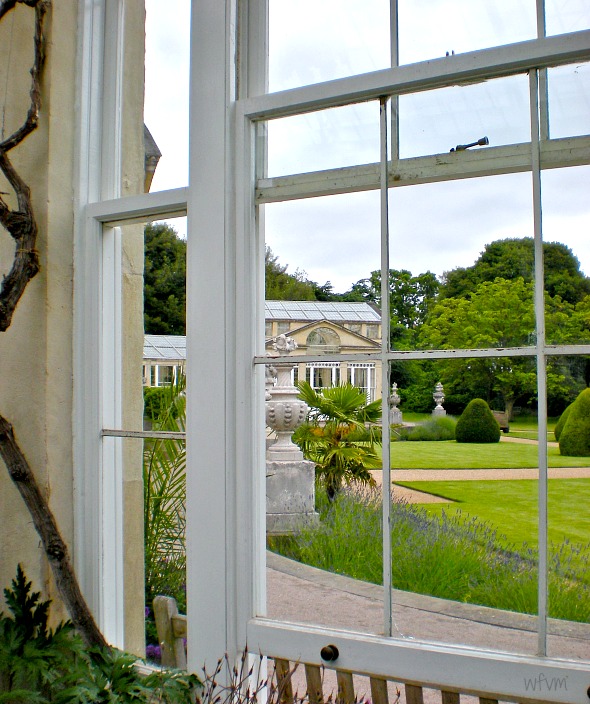 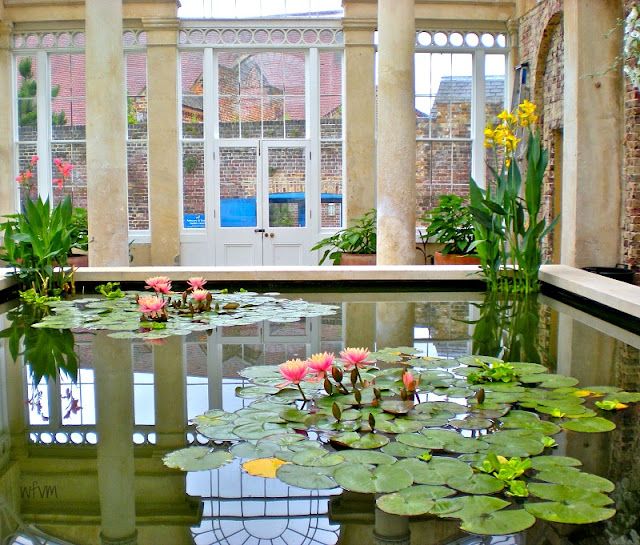 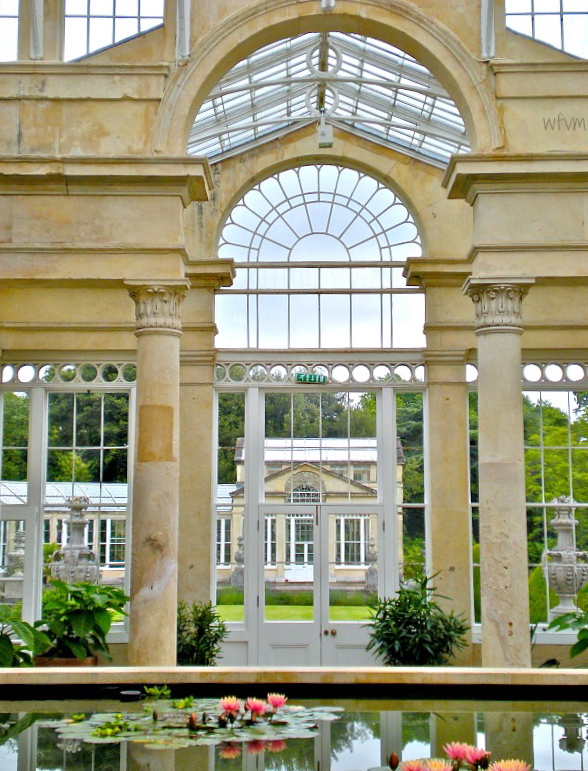