Mold, is an historic market town in Flintshire, North Wales. It sits in a fertile valley on the River Alyn between the Cwydian Mountains and the plains of Cheshire. The main street was once home to a Norman Motte and Bailey castle built in AD1093, and there is evidence of occupation by both the Romans and Saxons.
A Welsh legend speaks of sightings in the local hills of Bryn-yr-Ellyllon - Fairies' Hill or Goblins' Hill - a ghostly boy, clad in gold, a glittering apparition in the moonlight. Local citizens avoid the hill after dark, they have heard too many reports of sightings from travellers passing through their valley.
In 1833, some workmen were digging a prehistoric mound to gather stones, and as they were working they uncovered a stone lined grave. In the grave were hundreds of amber beads, several bronze fragments, and the remains of a skeleton. Wrapped around the skeleton was a mysterious crushed object - a large and finely decorated broken sheet of pure gold. 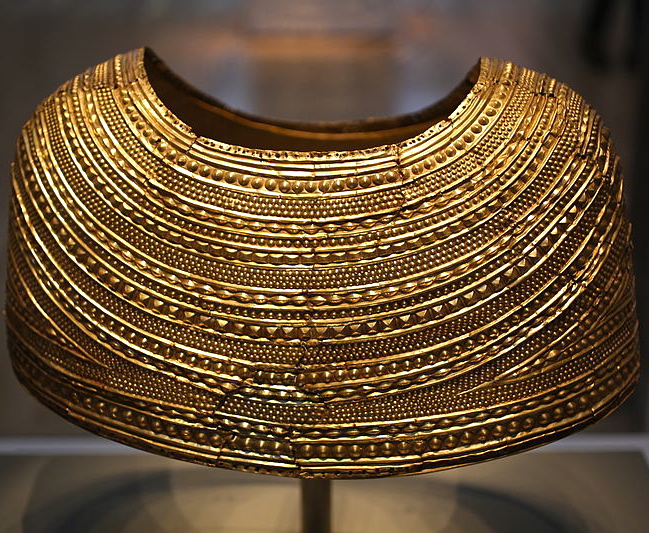 This stunning object is a golden cape decorated in a repoussé punched design giving the effect of strings of beads for the shoulders of a human being.
Excited by the dazzling wealth of their find the workmen eagerly shared out pieces of the gold sheet. The tenant farmer, whose land it was on, taking the largest piece for himself. In 1833 there was little legal protection, and nobody would have known about the discovery if it had not been for the local vicar. Learning of the extraordinary find he wrote an account about it which in turn aroused the interest of the Society of Antiquaries hundreds of miles away in London.
The cape has been dated to the Bronze Age, around 4,000 years ago. It is not known who made it, but it was clearly made very skilled craftsmen. The elaborate design suggests a long tradition of crafting luxury items.
In the past it was easy to dismiss British prehistoric societies as primitive people existing before recognisable civilisations emerged; however, partly through the discovery of rare objects like this Mold Gold Cape, in recent years we have now come to view these societies rather differently.
information courtesy Neil MacGregor, Director British Museum, and wikipedia.
Posted by Rosemary at 09:06