In the Vale of Glamorgan

Around c.650 AD the picturesque hamlet of Llanfarcan was a thriving centre of Christianity. It was here that St. Cadoc built a monastery which by the year c. 800 was a flourishing centre of learning. Despite destruction by the Danes, Llancarfan monastery continued to be the most powerful ecclesiastical community in Glamorgan. It did not, however, survive the Norman invasion, and the Abbey's responsibility then passed to the Abbey of St. Peter in Gloucester. 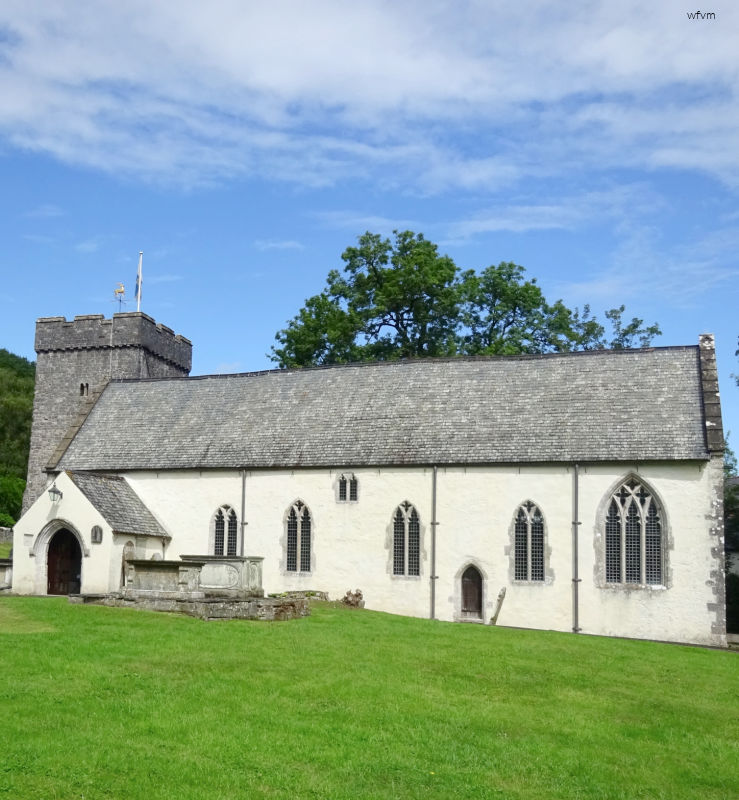 Although nothing now remains of the monastery, St. Cadoc still retains a presence in the form of the local parish church, where the buildings simple chancel arch suggests a foundation date of around 1200.

Fifteen years ago when work was being carried out to the interior walls due to damage by Death Watch Beetle, peices of limewash fell off them. This revealed red painted lines which indicated the presence of medieval wall paintings. As the church is Grade 1 ⭑ listed it was necessary to employ specialist conservationists and it has taken years and years of work to reveal the paintings. The images painted in 1500 may seem macbre to our eyes, but they were done to convey to a largely illiterate population graphic scenes of the consequences of sin.

In England I have seen several medieval 'Doom Walls', as they are collioquially named here, which graphically show the Last Judgement i.e the differences between heaven and hell, but the paintings on the walls in St. Cadoc's, Wales use a different approach.

Covered in over 27 layers of lime wash for almost 500 years, the paintings show St. George and the Dragon, Death and the Gallant, and six of the Seven Deadly Sins. 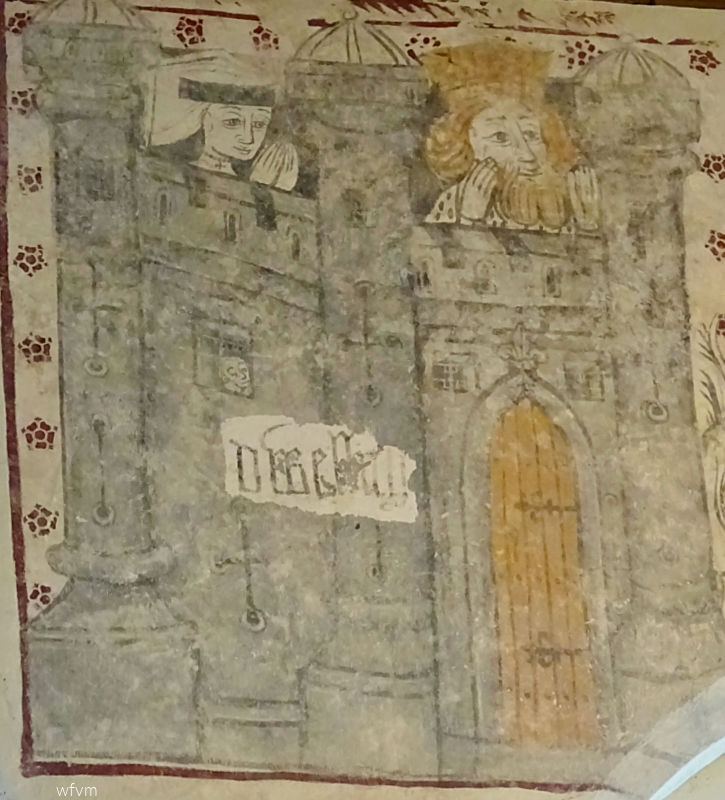 The King and Queen peer through the castles battlements seemingly in great dismay. 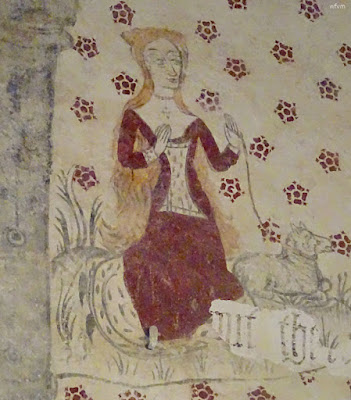 As their daughter, the Princess, plays in the grounds below with her dog unaware of the dragon coming to get her. 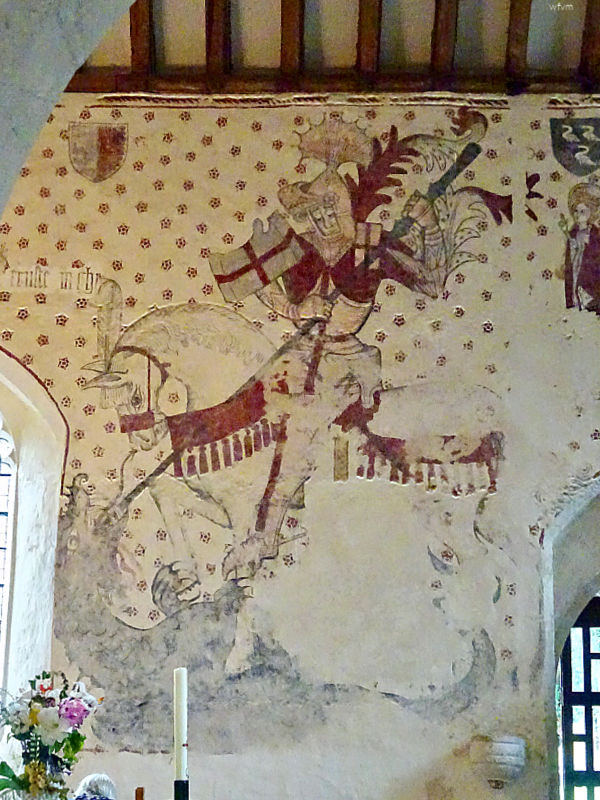 But in rides St. George to the rescue, he slays the dragon, and saves the princess. The Virgin Mary is shown to the right bestowing her blessings on St. George.

St George was adopted by the English during the Crusades and later became the patron saint of England whose qualities many sought to emulate; therefore a positive role model that Christians could aspire to.

Dancing with Death - the Gallant (knight) and the Cadaver (skeleton)

This painting depicts an elegant 15th century young man holding hands with a skeleton. The skeleton is wearing a shroud and appears to be leading the knight out through the window and into the graveyard beyond. 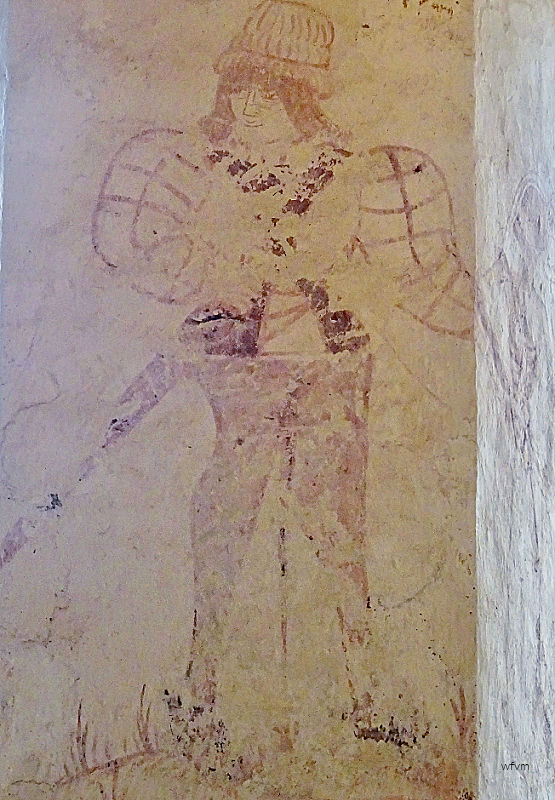 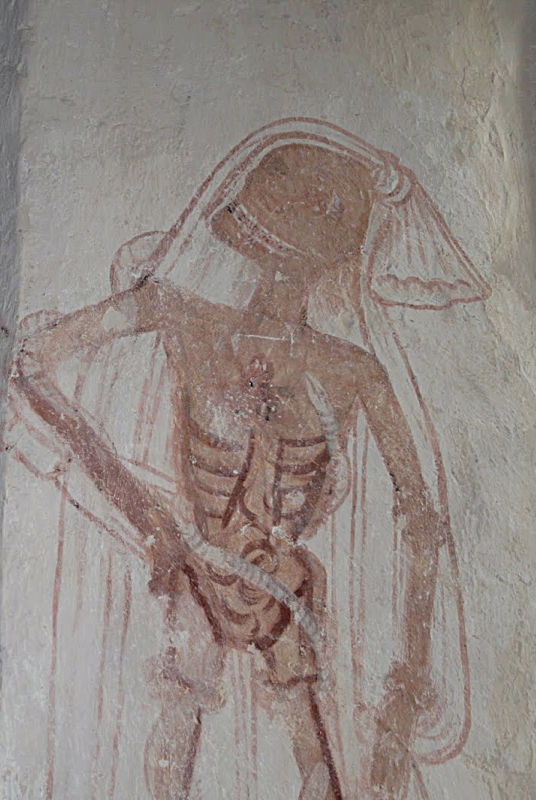 It is difficult to photograph them standing together as the Gallant is on the interior wall whilst the skeleton is featured pulling the Gallant's arm around the corner into the inset window wall. A toad can just be made out on the skeleton's chest, just seen to the left of the snake-like worm's head. We know that it is a worm and not a snake - the lines on it are segments not scales. The Cadavers lips are open in an awful grin. It still has eyes, and tufts of hair hang from the neck. This painting has been done by a completely different hand and is considered to be far older than the other paintings.

A multi-headed beast along with several small devils lure mortals into transgressions to condemn their souls forever into everlasting punishment.

The suicidal victim of sloth has reached the depressive limits of monastic isolation. He is in spiritual gloom, cast into despair. His commitment, perhaps faith, withers in hopelessness. Helped by the tempting demon, the sinner falls upon his sword.

Note: I have difficulty in understanding this representation and description of sloth. However, although today sloth is acquainted with laziness in the medieval period it was a spiritual sin as mentioned above. 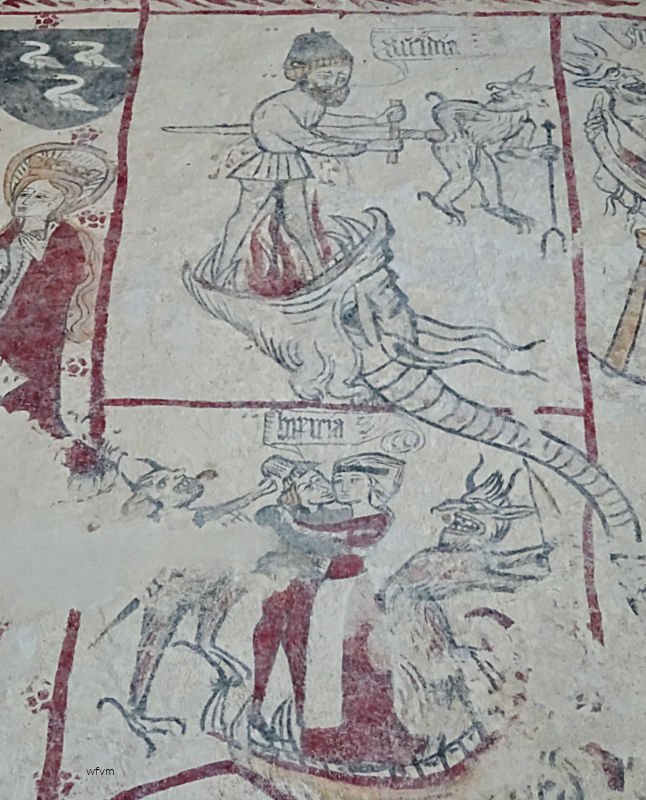 The lower part of this image shows Luxuria/Lust

The young couple seem to our eyes to be involved in nothing more than a cuddle, but the fiery mouth beneath them gives out the warning. 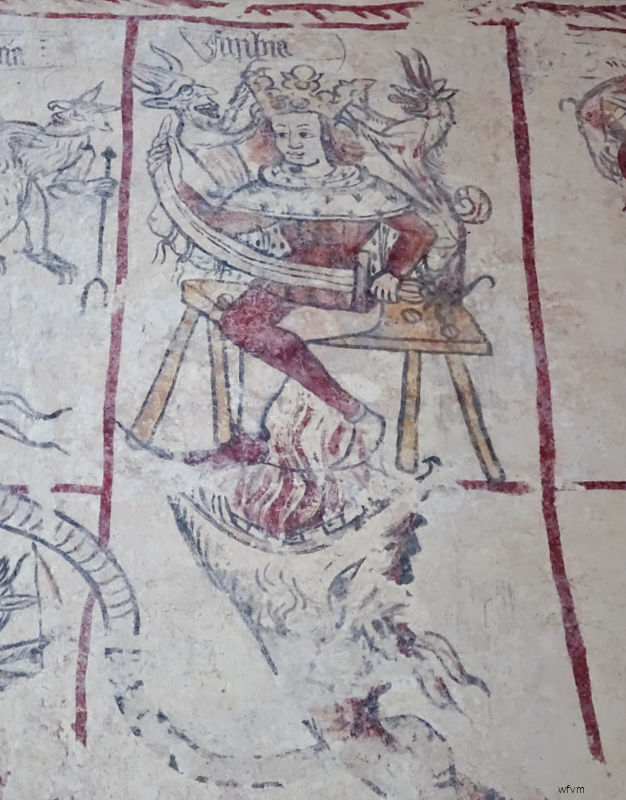 Here is an attractive young man who clearly aspires above his worldly rank. His lower quarters sit on a humble wooden bench, while blatantly infringing clothing prohibions. Pride is also crossing his legs which according to medieval iconographic tradition casts him as a 'wrong doer'. By contrast his upper half is regally clad, his shoulders heavy with ermine, as two grosteque acolytes place a crown upon his head. 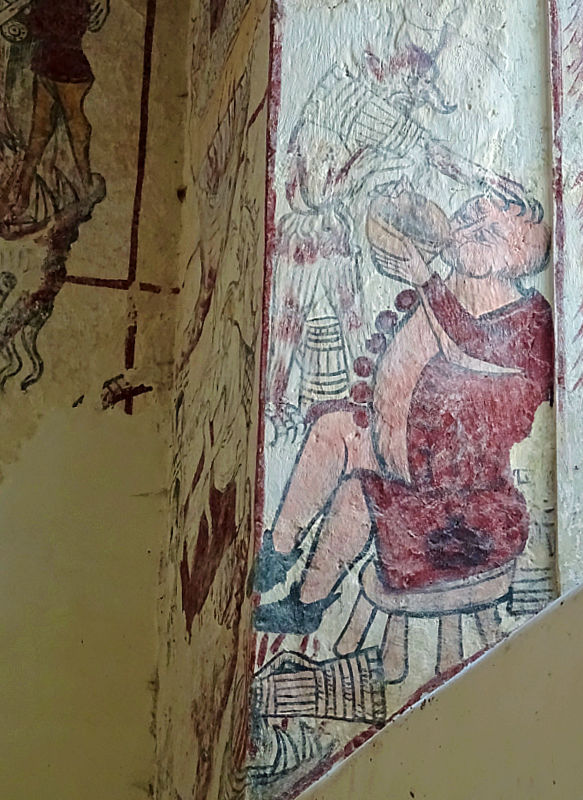 It will be apparent that Gluttony is more often than not linked to drink and the hostelry, as is the wonderfully-painted glutton on St.Cadoc's wall. He may look like Desperate Dan devouring his cow pie in the Dandy comic, but he is in truth a slave to the medieval tavern. 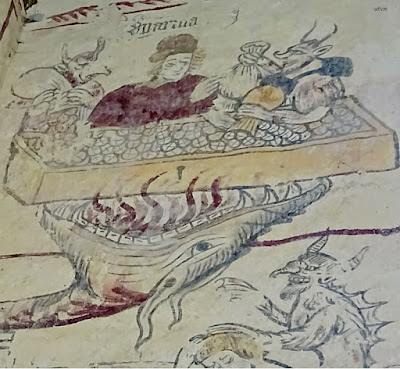 The miser represents the archetype of avaricious characters. His covetous hand grasps at a bagful of money whilst his desires are being stimulated by the number of golden coins which the tempting devils continue to pour into the coffers before him. 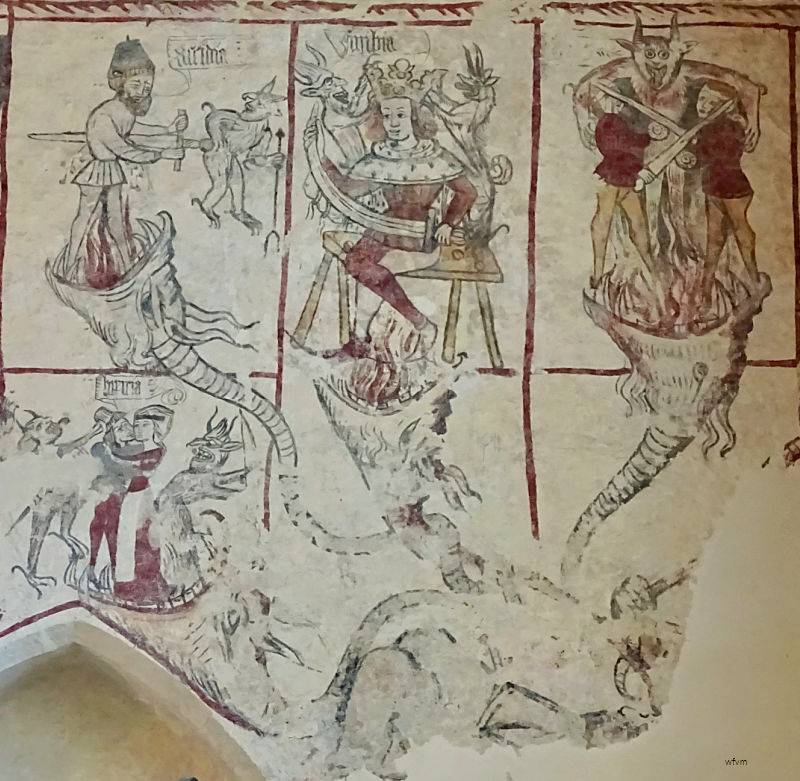 The image on the right shows a horned demon, his wild eyes and salaciously curving tongue, relishes the conflict he is promoting between two very young men, identically clad and certainly not dressed for battle.

The final sin Invidia/Envy appears to be missing. However, at the very bottom of the above image is a man lying on the ground - it is possible to just make out his legs and lower part of his body - could this be Envy? 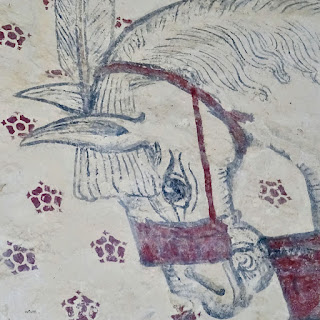