2. Endemic to the Balkans, extending as far as Greece, Crete, the Aegean Islands, and to parts of SW Anatolia in Turkey.

3. A member of the Araceae family.

4. Should not be grown too close to habitation due to its strong putrid smell.

It became clear to me that not many people have actually seen this flower or perhaps even knew about it.

Why do I have it growing in my garden? I first discovered the plant about 25 years ago growing in a garden that we visited. I was intrigued by it, and for that matter I still am. I wondered whether it would be possible for me to grow one too. My plant is now almost 25 years old and turns up, along with its offsprings, every year, come rain, snow, sunshine, or whatever weather is thrown at it. I don't protect it during the winter or give it any special treatment. However, importantly I have sited it well away from our house. Why? because for just 24 hours only during the year it smells of putrid rotting meat. This attracts plenty of flies to pollinate it.

By growing this plant I am apparently in good company. It also grows in The Cloisters at The Metropolitan Museum of Art in New York where it is a great favourite with their visitors. The Met always hope that it will bloom for them and give out a good flourish of scent on their 'Garden Days'. 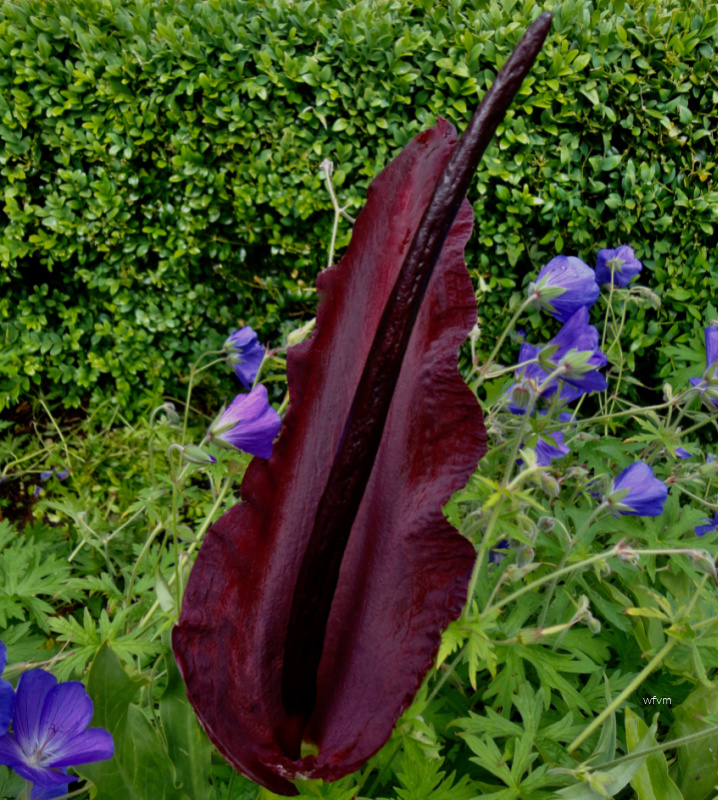 Sitting amongst the small flowers of Geranium 'Johnson's Blue' makes it easier to appreciate its size.
☆☆☆☆☆☆
The first and only 100％ correct answer was received from John @ "By Stargoose And Haglands". I am not surprised as John is extremely knowledgeable about flowers, trees, animals, insects and birds - very well done John.
75％ goes to Mariette @ "Back to Basics". She got the first three questions correct, but not No.4.
75％ goes to John King (who doesn't appear to have a blog) and to Margaret D @ "thoughts & happenings" who also both answered three questions correctly. However, in question No.3. I asked which family does the plant belonged to - the answer being Araceae. John gave the name Aroid as did Margaret, but neither gave the plant its correct family name - Aroid is its species.
My thanks go to Mariette, John and Margaret too.
Posted by Rosemary at 07:17