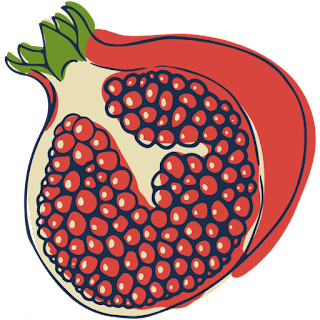 For thousands of years, the pomegranate, a juicy red fruit with many seeds, has been both a source of food and herbal medicine. Its many seeds made it a symbol of fertility, for out of one fruit could come many more. To the Romans, the pomegranate signified marriage, and brides decked themselves in pomegranate-twig wreaths.

Pomegranate seeds appear in the Greek myth of the goddess Demeter, protector of grain, crops, and the earth's bounty, and her daughter Persephone.

One day Persephone was picking flowers when Hades, the king of the underworld, seized her and carried her to his dark realm to be his bride. Grief-stricken, Demeter refused to let crops grow.  All of humankind would have starved had not Zeus ordered Hades to release Persephone. Hades let her go, but first he convinced her to eat some pomegranate seeds. Having once eaten the food of the underworld, Persephone could never be free of the place. Henceforth she was fated to spend part of each year with Hades.

When Persephone goes back to Hades, the world turns barren, but when she returns to her mother, the earth produces flowers, fruit, and grain. Thus this ancient Greek myth gave rise to an explanation for the seasons.

I love the sculptural shape and form of a pomegranite, and the way that it's protective crimson leathery shell safely carries its cargo of shiny red seeds, resembling a jeweller's pouch filled with rubies.

We were both thrilled and delighted when we opened one of our presents on Christmas morning which contained a painting of a pomegranite. A gift that had been especially painted for us by one of our greatly loved granddaughters. 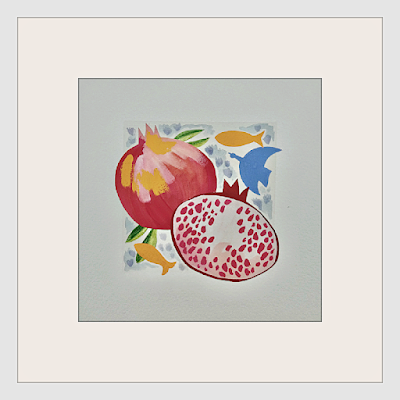