Along the Golden Valley in Herefordshire cont'd.........

St Faith's Church in the Herefordshire village of Bacton stands in an elevated position looking down over the River Dore in the Golden Valley. 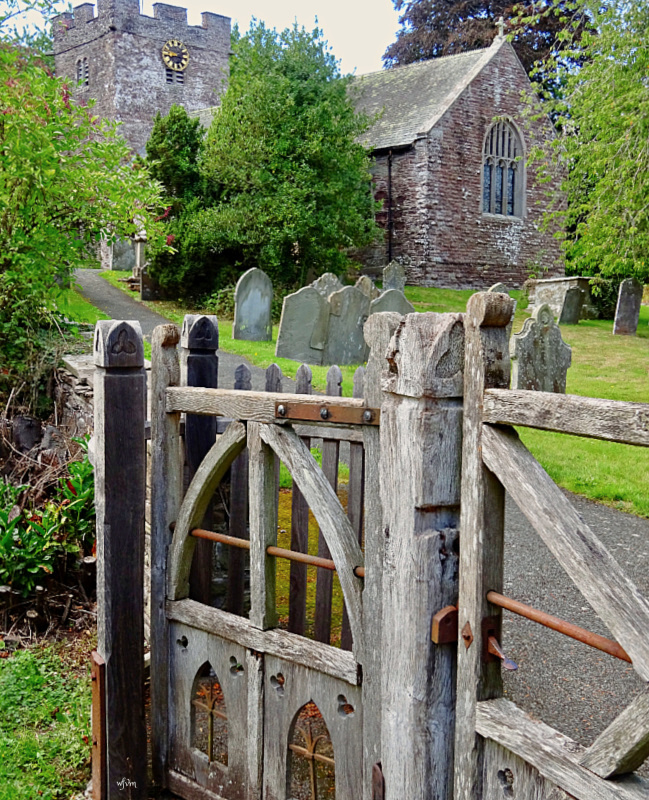 This ancient church contains two very rare Tudor treasures, one of which is the Blanche Parry Monument, which was commissioned by Blanche for herself 12 years before her death. For 56 years Blanche was the close confidante of Queen Elizabeth 1, Chief Gentlewoman of the Queen's Most Honourable Privy Chamber and Keeper of Her Majesty's Jewels. The monument shows sculptured effigies of both herself and the Queen along with a 28 line inscription. It is dated to before November 1578 and is the earliest known depiction of the queen as Gloriana signalling the propagation of the queen's iconography and cult of virginity beyond the court. The inscription was designed to both demonstrate Blanche's closeness and importance to the queen, and bolster the royal image. The wording concludes with the lines -

Blanche's epitaph appears to prove that Queen Elizabeth did live and die a maid (virgin). Having composed the inscription herself for her own church monument, Blanche would never ever have dared lied to God for fear of harming her chances of entering heaven. 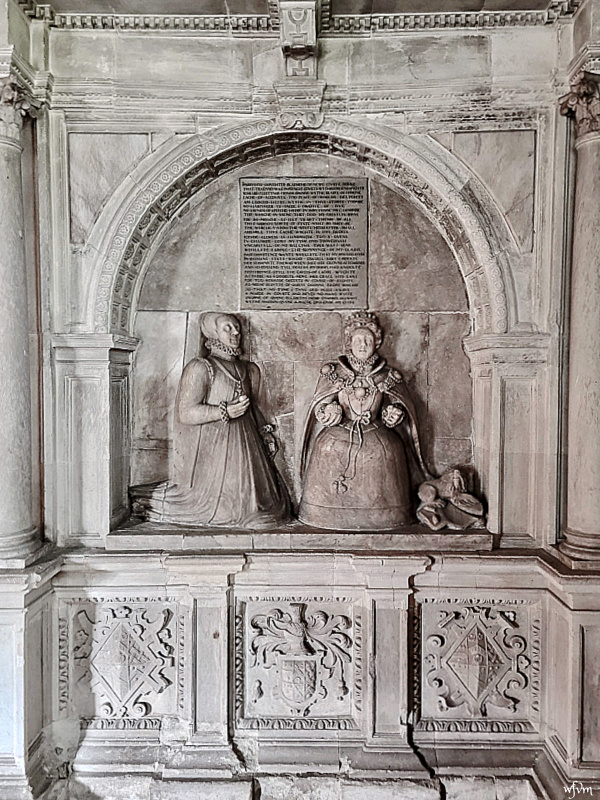 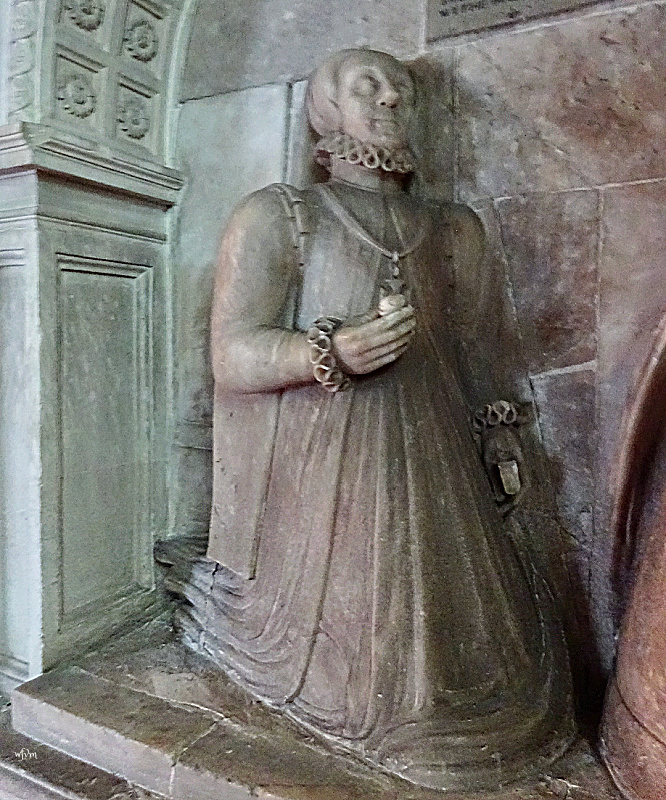 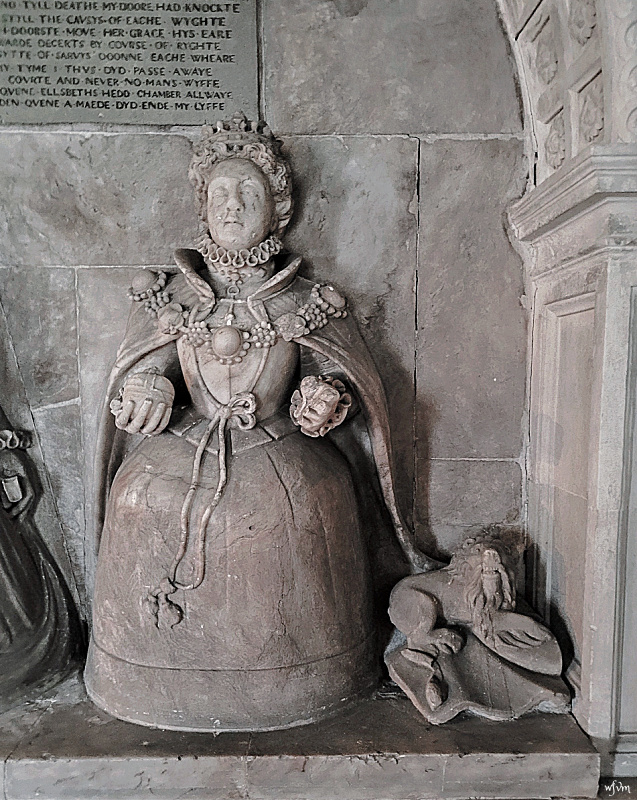 The other rare Tudor treasure is the Bacton Altar cloth; its true identity was only realised 6 years ago. For centuries this little church had possession of an exquisite Altar Cloth, a cloth which had been treasured by generations of parishioners. In 1909, it was decided that the Cloth should be framed in oak and mounted behind glass on the northern church wall away from any light in order to protect and preserve it. 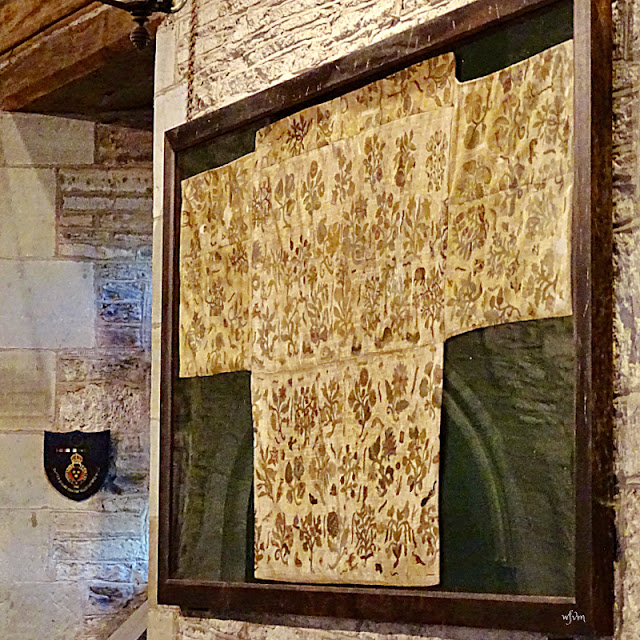 A replica cloth now hangs in Bacton Church
The Cloth stayed on the wall until 2015, when historian Ruth Elizabeth Richardson, who was writing a biography about Blanche Parry, came to look at it. Whilst studying it, she realised that the cloth was of incredible quality and rarity. She shared her photographs with Eleri Lynn, the Dress Historian Curator at Historic Royal Palaces, who also went to view the cloth. As soon as she saw it she realised that it was something very special. Following Eleri Lynn's close scrutiny and study of the fabric she quickly realised that the fabric had previously been a dress, as evidenced by a distinct pattern cutting of the fabric, and that it was almost cetainly a dress that must have been worn by Queen Elizabeth 1. Dating puts the fabric squarely in the 1590s, due to the style of the embroidered florals. The embroidery shows a striking resemblance to a dress worn by Queen Elizabeth 1 in the Rainbow portrait hanging in Hatfield House. 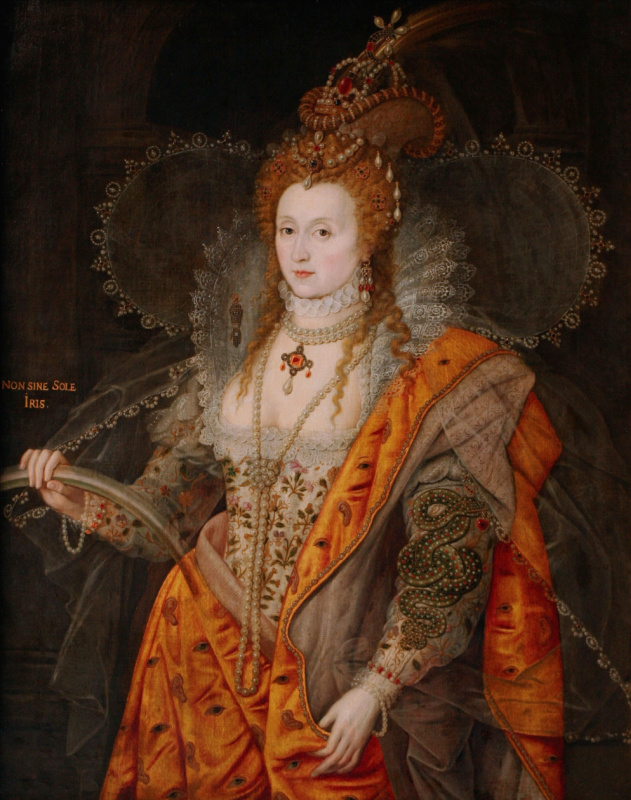 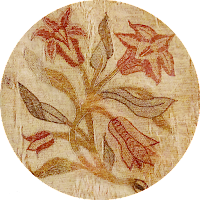 The garment is made of cream-coloured silk and Italian cloth of silver giving strong clues as to its owner. The elaborately embroidered colourful flowers, the animals and vegetation all done in silk along with the use of silver and gold thread were under Tudor "sumptuary laws" reserved for senior members of the royal family only. Unusually, the embroidery was stitched straight onto the fabric, indicating expert workmanship and therefore an elite owner.
No other piece of fabric of this date and nature exists anywhere else in the world, which makes it significantly important. It has now been valued at well over one million pounds.
Our time here is rapidly drawing to a close if we are to find and locate our final destination before making tracks for home.
The Sat Nav. takes us down into the valley and back up into the hills seen in the distance. We turn up the final road which appears to be very steep and narrow so we abandon the car and continue to walk up to the top of the hill.

Are we nearly there yet? 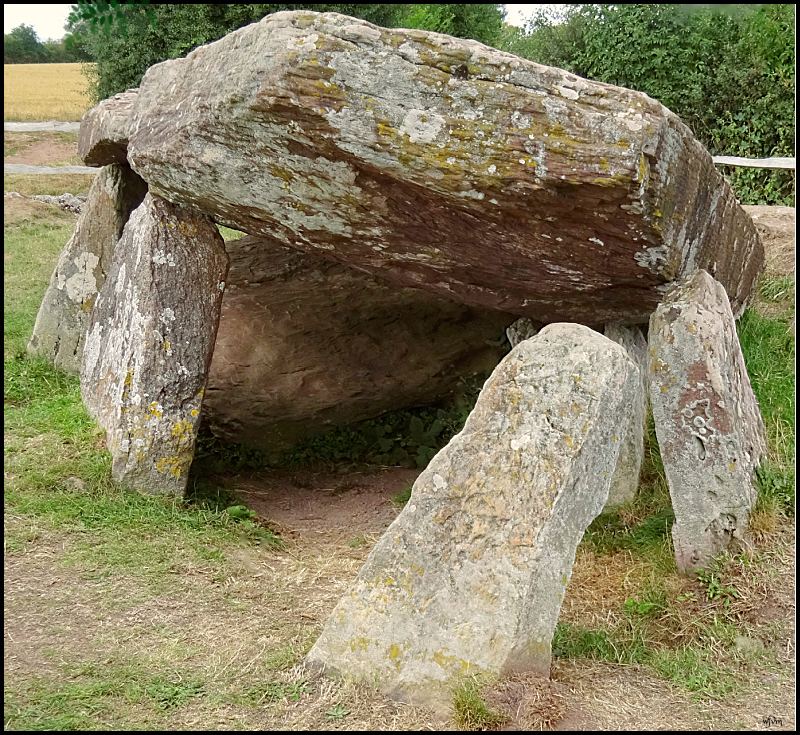 This Neolithic chambered tomb is over 5,000 years old. Today only the large stones of the inner chamber remain which would once have been covered by a long earthen mound i.e. "barrow". The chamber is formed by nine upright stones, and topped with an enormous capstone, estimated to weigh more than 25 tonnes. How did those Neolithic people move it or lift it? This tomb has never been excavated, but similar examples in the
region have been found to contain incomplete skeletal remains of several people, together with flint flakes, arowheads and pottery.  During the period of their use chambered tombs would have served as more than just burial places or sites of ritual. It is thought that they may also have been used as a status symbol and a territorial marker.
Posted by Rosemary at 10:44