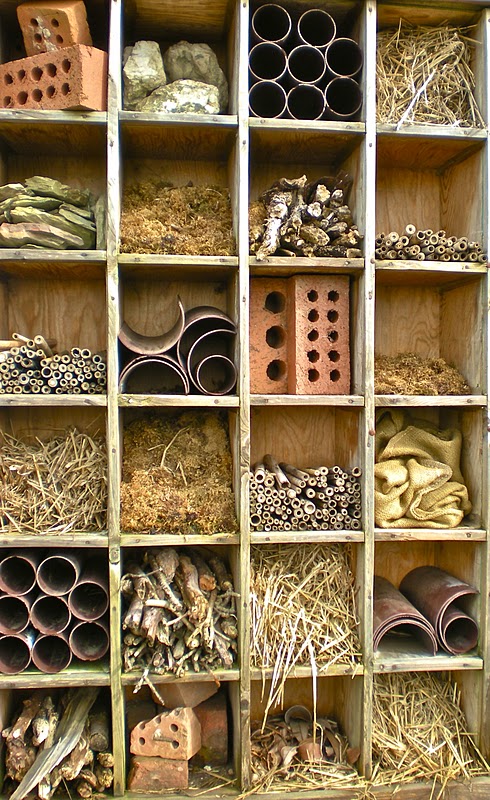 Insect Cubbyholes
When we travelled to Bulgaria in the 1970s, H had just started working at a Government Research Laboratory. When his colleagues knew where we were going, they suggested that we contact a Bulgarian, called Peter, who had spent several weeks working at the laboratory the previous year. They wanted us to visit him and take him a bottle of whiskey, a rare commodity in Communist Bulgaria at the time.
We telephoned the family on our arrival, and they arranged to pick us up from our hotel so that we could have a meal with them at their home. We were really excited at the prospect of  being entertained by locals.
When they arrived, Peter's wife was driving a very old, enormous car. On the journey she seemed to have trouble climbing the hills, and the gear lever on the steering column was also giving difficulties.  As the journey continued we understood that the car hardly ever came out except to visit their vineyard in the countryside.
The leafy streets where they lived in Varna were incredibly quiet, the roads were empty and nobody was around. We were told that it was because the British production of The Forsyte Saga was on TV, and everybody who could get access to a television was indoors watching it. It was then that Peter's wife turned to H and said she had been expecting him to be dressed and looking like Jolyon!!!  He must have been a disappointment wearing his smart but casual attire.
As we pulled up outside their home we were confronted with a large turn of the century double fronted house.  It had been in Peter's family for years. On entering the hall with its central stairway, it suddenly became clear that the house had been split up into many parts. We went up the stairs to their section, where under Communist rules they were allowed only 17 sq. meters each.  The rest of their home had been confiscated and given to other families to live in. This was a shock for us to discover, all they had was a living kitchen, and two small annex bedrooms for themselves and their  son.
In the kitchen one wall was given over completely to little cubbyholes. They must have had about a dozen each in which to keep all of their possessions and belongings.
The two dolls in national costume were very kindly given to our sons when we left after our visit. A happy reminder of our special time spent with them.
Further post on Bulgaria here

Email ThisBlogThis!Share to TwitterShare to FacebookShare to Pinterest
Labels: Travel