This is the third guest post done by H

Sea Urchin and Sand Dollar from our collection
Who, amongst us, has not been excited at discovering the skeleton of a sea urchin. Whether found whilst exploring a rocky pool, or in a seaside souvenir shop, the aesthetic appeal is immediate. We take it home and place it in a prominent place so that its form can continue to be a source of pleasure.

The taxonomic class into which the sea urchin falls is "echinodermata", an invertebrate family of 6,000 living species including starfishes and sea lilies. Some 13,000 extinct species of echinoderms are also known.
The remnants we find of a sea urchin (scientific name: "echinoid") on the beach is the calcareous skeleton with its distinctive five-pointed pattern.
My layman's geological and anthropological interest in sea urchins has been triggered by an article in the June 2012 edition of the magazine "Geoscientist" published by the Geological Society of London, of which eldest son is a Fellow. My granddaughter's recent commencement of studies at Oxford University in archaeology and anthropology has also reinforced my interest.
The article is entitled "Prehistoric fossil collectors" and is written by Ken McNamara, a senior lecturer at Cambridge University.
The article throws light on the collecting of fossil sea urchins, a practise known to date from as long ago as 400,000 years, when a human ancestor (Homo heldelbergensis) shaped a flint tool in which a fossil sea urchin was incorporated. 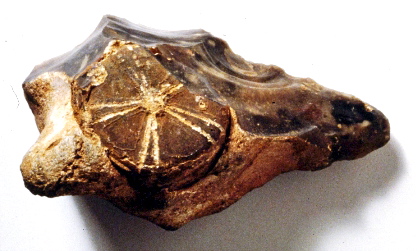 courtesy Ken McNamara
The author describes the discovery in the English Chiltern Hills in 1887 of a grave containing the skeletons of a young woman and child. Also in the grave, dating to the Bronze Age some 4,000 years ago, were hundreds of flint balls each carrying the fossilised five-pointed image of a sea urchin. As McNamara puts it "a cornucopia of fossil sea urchins seem to have been buried very carefully with the bodies in their chalky grave". 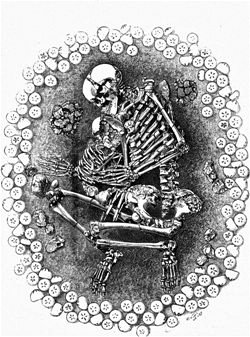 courtesy Ken McNamara
There are numerous other instances of fossil sea urchins discovered in neolithic barrows (i.e. burial mounds), and in graves set-down as recently as Anglo-Saxon times, which took place over a wide geographical area. The question McNamara attempts to answer is "Why?". 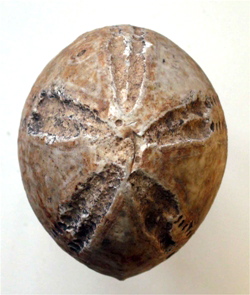 courtesy Ken McNamara
The author speculates that the fossils could have had some great spiritual significance, perhaps in ensuring the passage from this life into the next. Later practises, for example in Celtic cultures, of placing fossil sea urchins on window sills or near to doors, were part of a folklore associated with the bringing of good luck. They are also linked with Norse mythology through the god Thor in which they were called "thunder stones" thrown to earth by Thor. Thor was the peasants' god, who gave them protection; so stones were strategically placed to ward off lightning strikes and to protect the house from evil. 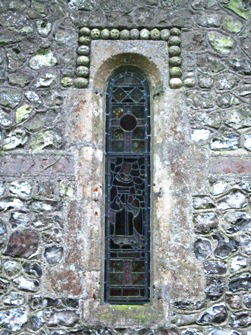 One of the most striking fossil Sea Urchins found was at Heliopolis, Egypt which had hieroglyphs inscribed on it in about 1500 BC. They tell the name of the priest, Tja-nefer, who found it in 'the quarry of Sopdu', a god sometimes known as the 'Morning Star'. McNamara links the five-rayed star on the fossil with the extensive use of the star symbol in Egyptian burial chambers; hence a spiritual connection with the pharaohs and their funeral rites.
He suggests that the myriad modern-day usage of the five-pointed star symbol may have evolved from this usage in ancient times.
There is a lot more fascinating information in Ken McNamara's article, and I would recommend it to those whose interest has been sparked. He is also author of a book "The Star-crossed Stone" published by University of Chicago Press.
Incidentally, fossil Sea Urchins continue to be turned up by the plough in flinty fields, such as on Salisbury Plain, and are still collected to this day!
Personally, I believe that the aesthetic appeal of both the skeleton and the fossils probably explains, more than anything else the human fascination with these objects.
First guest blog by H and second.
Posted by Rosemary at 12:49

Email ThisBlogThis!Share to TwitterShare to FacebookShare to Pinterest
Labels: Science