The English have had a long standing love affair with France, but up until recently it has been rather one sided.
Many of our senior citizens live in little villages all over France, however, it would be wrong of me to say that it is mainly confined to the older generation, our eldest son spent 5 years living in Paris with his young family.
Suddenly, however, there is a reverse situation taking place, mainly amongst the young well educated French, who are now moving to the UK in considerable numbers.
In London alone there are now over 400,000 French people residing, and the numbers are climbing rapidly. After the election of François Hollande as President last month, even more may be coming to what is being dubbed the 'fifth French city'. French financiers base themselves in South Kensington, where the Lycée offers the best in Gallic education. Thanks to the French government, fees there are relatively low - £2000 a term - compared with other private schools in London. Nearby there is a French cinema at the Institut Français and you will be hard pressed to hear an English voice on Bute Street, which is packed with French cafes, patisseries, grocers and bookshops. The newsagents are stacked with Le Monde and Le Figaro. French mamans push strollers, buy brie, and after work, outside the Zetland Arms, French business men and women crowd together to talk, smoke and drink red wine.
We can see the change taking place in our own quiet little corner of the Cotswolds. We have a delightful restaurant run by a young French women and her family. The restaurant is in a beautiful old stone house. When dinning there, the atmosphere is akin to eating on the continent. The owner has a little ante-room off the restaurant in which she sells olive oil, lavender products from Provence, and a large selection of pâtés and olives. In our nearest local town there is a lovely vintage shop selling brocante for the home which is owned by a young French couple. 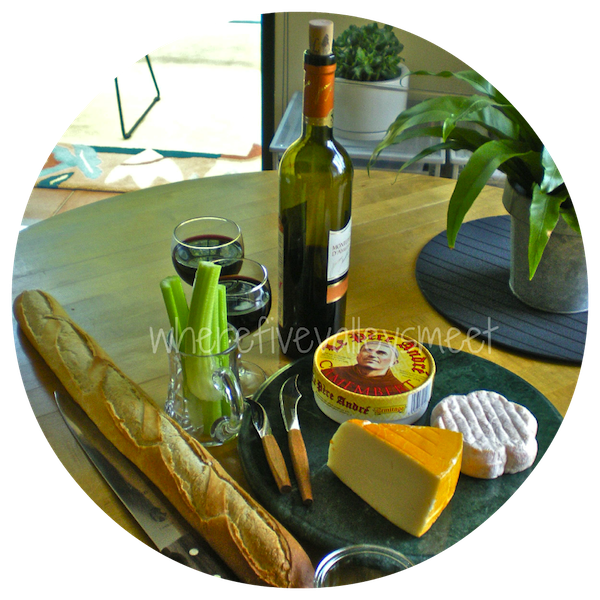 Several French markets are held during the year in the nearby small towns selling freshly baked bread, cheeses, pâté, wine, garlic and olives etc.
As I mentioned the pronounced flow of French people are mainly young, educated people who want to escape the stuffiness of Paris, their words. In Paris, class, contacts and family background matter much more. The labour market is apparently much more accessible to them in London. 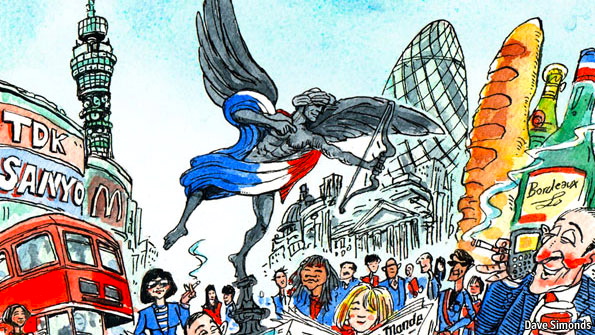 courtesy the Economist
Paris on Thames
A young French illustrator from Paris said that she loves the freedom of London. She said she would never have been able to set up her own business in France because of too much bureaucracy.
Another young women, with an Algerian mother said she encounters no problems of mixed race in London, and said how welcoming people are. A women in her mid twenties, a fashion designer, said the best thing about London is the fashion. If France is the home of understated chic, London is more stylish and adventurous. There is a freedom of expression here that you don't get in Paris, she said. She also said that at home, the look is very conservative - beautiful and elegant but muted and plain. At London fashion Week, anything goes. It is colourful and outrageous, everyone mixing different styles.
We should remember that this not a completely new thing. In the 17th century, 16,000 Huguenots, expelled from France, settled in London. They were mainly skilled silk weavers, silver and goldsmiths and masters of numerous other crafts. London benefited hugely from their input.
I personally welcome our Gallic arrivals; our country should again be the beneficiary.

some of the facts and quotes sourced from the Sunday Times
Posted by Rosemary at 14:50