Trier cathedral to the right, the red brick building to its left, is the Basilica of Constantine - a Roman palace basilica built by emperor Constantine, son of Helena, 306 AD. 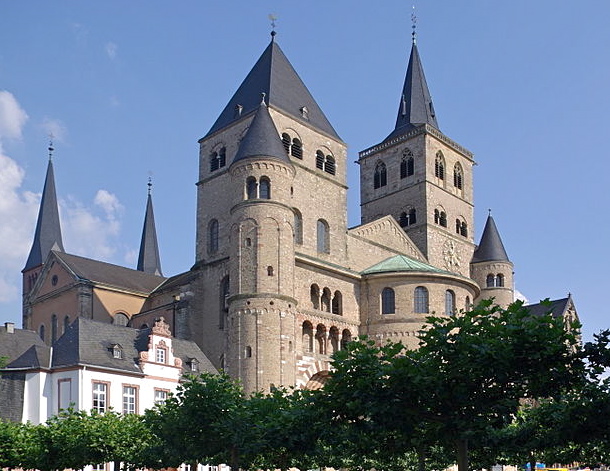 Trier Cathedral
When I wrote the legend of the True Cross in January 2012, I thought that it would have a very limited appeal - how wrong could I be. It has remain almost constantly at the top of my Popular Posts ever since.
Imagine my delight when walking into Trier Cathedral: a Bishop's Church for 1700 years, and discovering that according to medieval tradition, Helena, a central character in the legend of the True Cross, the mother of the Roman Emperor Constantine, donated her house to the Trier Bishop Agritius to convert it into a Bishop's church. Archaeological examinations under the church have, in fact, verified a residence below the church. Not only that but Helena is said to have given the church what is now their most precious possession - the seamless tunic of Christ, where it is held in a special Baroque sanctuary within the church. 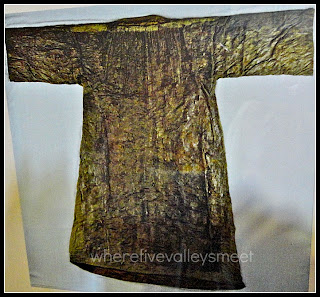 This is my photo of their photo, so the quality is poor.
The Holy Robe, also called the tunic of Christ was, according to legend discovered by Helena in the Holy Land in the year 327 or 328 along with several other relics, and brought to Trier by Helena.
"then the soldiers, took his tunic, but the tunic was seamless, woven in one piece from the top throughout, so they said to one another, let us not tear it, but let us cast lots to decide whose it shall be"
John. 19, 23 - 24 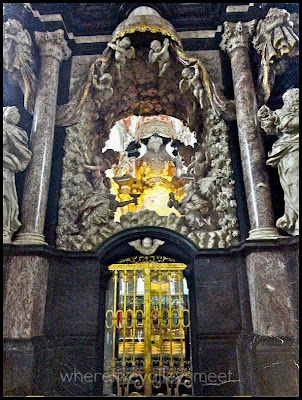 The Baroque shrine of the Holy Robe where it is encased in an air-conditioned glass case. The robe has been displayed only twice since 1933, the last time being in 1996. 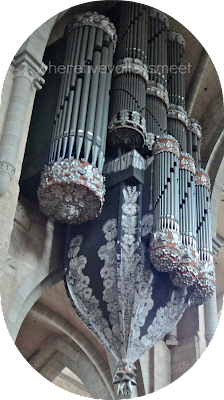 The German organ made in 1974 by the renown Klais family. 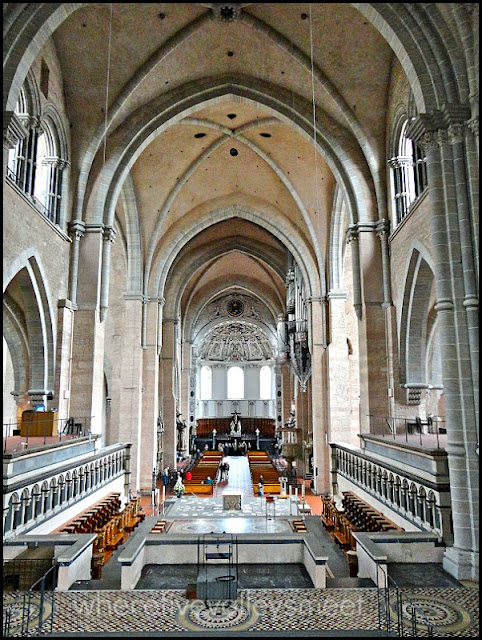 Looking down the church from the shrine shows one of the largest remaining church structures from the 4th century. However, over the years it has been severely damaged by invaders - Franks, Normans, and Vikings. The West front with its five symmetrical sections remains typical of Romanesque architecture constructed under the Salian emperors. This view shows the gothic vaulting and a Baroque stucco work vault at the end. 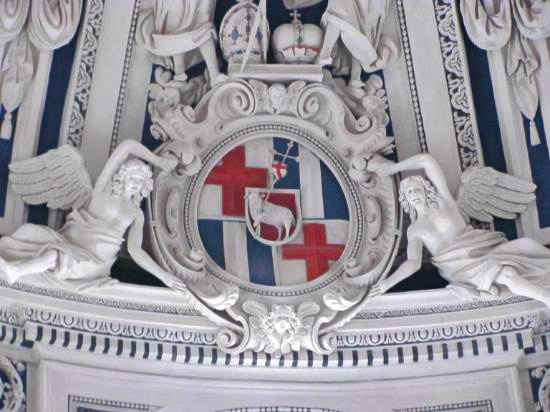 The Baroque stucco work
Attached to the cathedral is the Basilica of Our Lady, which dates from the same period. The high Gothic church is the third church on the site and was built by architects from Lorraine in 1227. It is the earliest Gothic church in Germany, its ground plan being a rosa mystica. 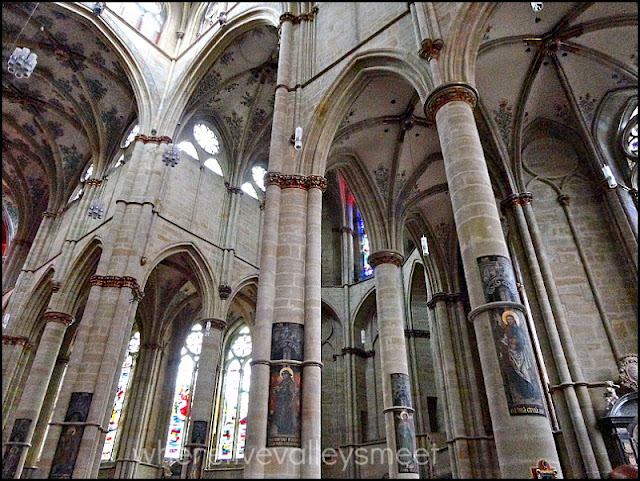 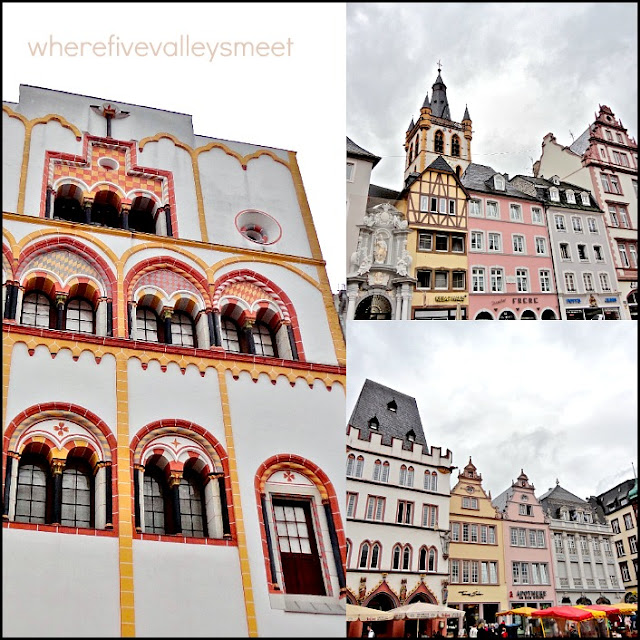 The medieval market square in Trier is said to be the oldest and one of the loveliest in Germany. The house in the collage on the left is known as the House of the Three Kings. It is Moorish in design and was originally built in 1230. You will note that it has a floating door to the right hand side which was only accessible via a retractable wood ladder for security. 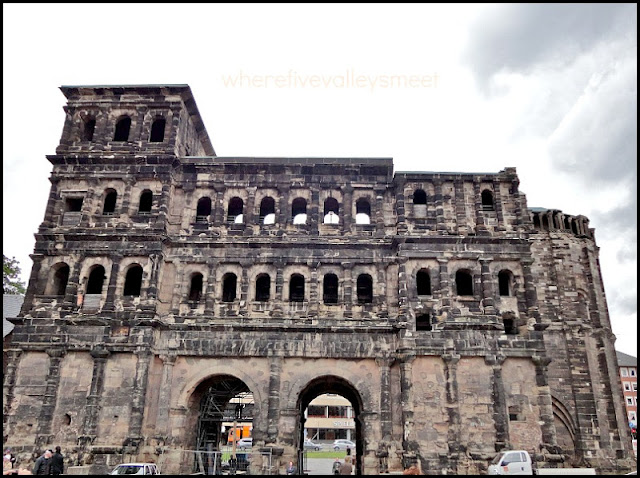 Porta Negra - Black Gate
Even before the Romans came there was a settlement in this valley. It belonged to the Gallo-Celtic tribe Treveri. Julius Caesar conquered the territory in 57 BC, and so a 500 year long Roman history began. It was the capital of the Roman province of Gallia Belgica, as well as the Roman prefecture of Gaul. Within its walls it was thought to have as many as 70,000 inhabitants. The Porta Negra is the largest Roman city gate north of the Alps which guarded the northern entry to the Roman city. When it was built it was a soft pink colour which has darkened over the centuries.
It was impossible to do justice to Trier during the time we spent there. We barely touched upon the Roman city of which there are many remarkable monuments to see. Trier was the first Roman city to be established north of the Alps and in fact has older foundations than Rome itself. 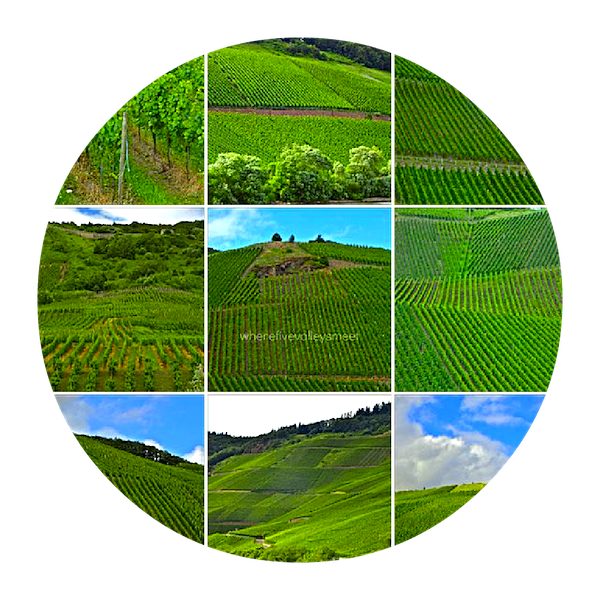