The journey started here - photos are scanned from my old images. 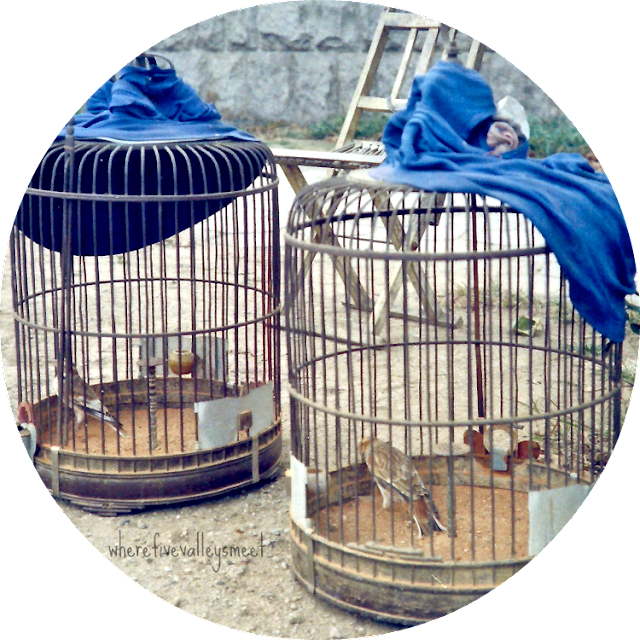 We travelled on an overnight steam train to Qingdao with our minder Madam Wu. The government organised our so called "soft-sleeper" in which you get the full works. Wood panelling, pot plant, lace curtains, china teacups, clean washrooms, carpets, and the best thing of all is that you can switch the speakers off which drone on endlessly broadcasting news, weather information and traditional music. Passing through the train to have our supper was an eye opener. Most of the other carriages called "hard seat" were literally that. It is the only travel the locals can afford, the lights stay on all night, as do the droning speakers, they were packed out to the gills with families squatting on the floor preparing food.
We arrived in Qingdao at the ungodly hour of 4.30 am to find about 20 people waiting to meet us. There were professors, heads of institutions, translators, none of whom seem to have a clue who we were, or where we were from; they had been commanded to be at the station to greet us by the authorities in Beijing. 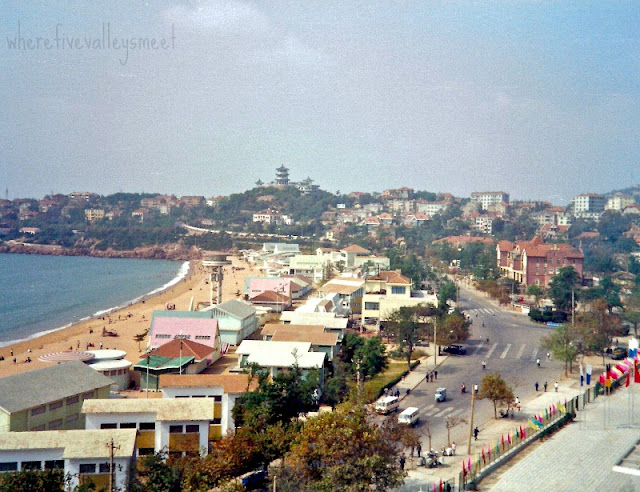 Qingdao from our hotel window with flags flying on the entrance steps
You have probably heard of Qingdao, it is where the sailing took place for the Olympics, it is also very famous for its beer. It was a simply fishing village until the late 19th century when German troops landed. The Chinese ceded Qingdao to Germany for a 99 year period which has left a legacy of European style buildings and gardens plus the brewery. A place favoured by the upper apparatchik for their vacations (yes, the top brass do take holidays).
We had lots of adventures in Qingdao but I will mention one or two which hopefully will give a small insight into life in China in the 1980s.
Life for most Chinese was simply a matter of survival.
Their first question when they meet you is not "how are you" but "have you eaten today". 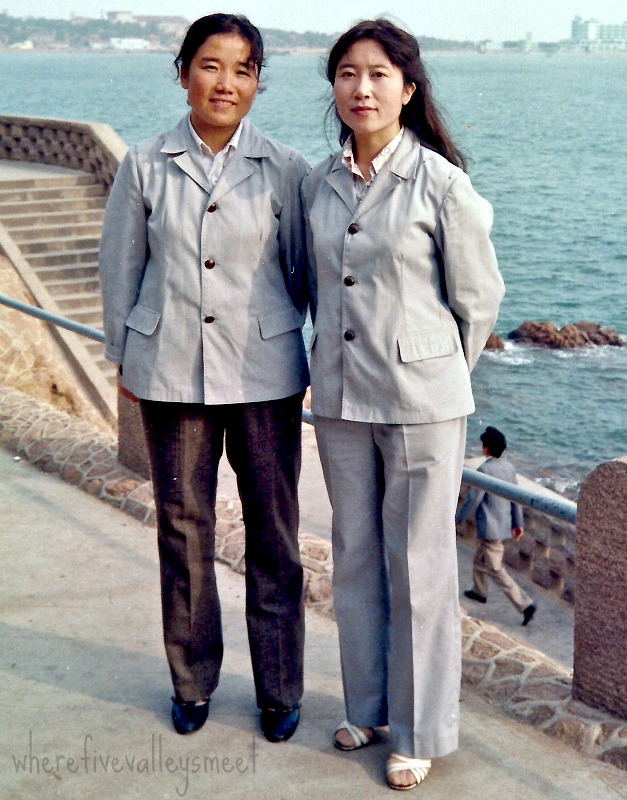 These two young women took me to a large warehouse, I expect it was a place for exporting goods to the West, it was full of the most wonderful handmade artefacts, carvings, fine silks, silver, and cloisonne etc. I found it extremely difficult to choose what to buy and asked them for their help and opinions. They replied that they did not know, they had never thought about it. Their reaction was because buying ornaments just for the pure enjoyment of it did not play any part in their lives whatsoever. The only purchases they made were for essentials.
We were told that on the following Sunday we would be taken walking in the Laoshan Mountains. I said that I had not bought my walking boots with me, but they pointed to my shoes and said they would be fine. A large group of people were waiting for us at the entrance to the hotel. I was surprised because their time when not working each week was so brief. It turned out that they were all over the moon to be accompanying us, it was an outing, a banquet was in store, and they were really happy to have the opportunity to take an adventure with us - it was a treat for them as much as us. I need not have worried about my walking gear, I soon discovered that climbing mountains in China is a different kettle of fish to that in the West. In China you have a smooth stone pathway and steps all the way to the top and then all the way down the other side. 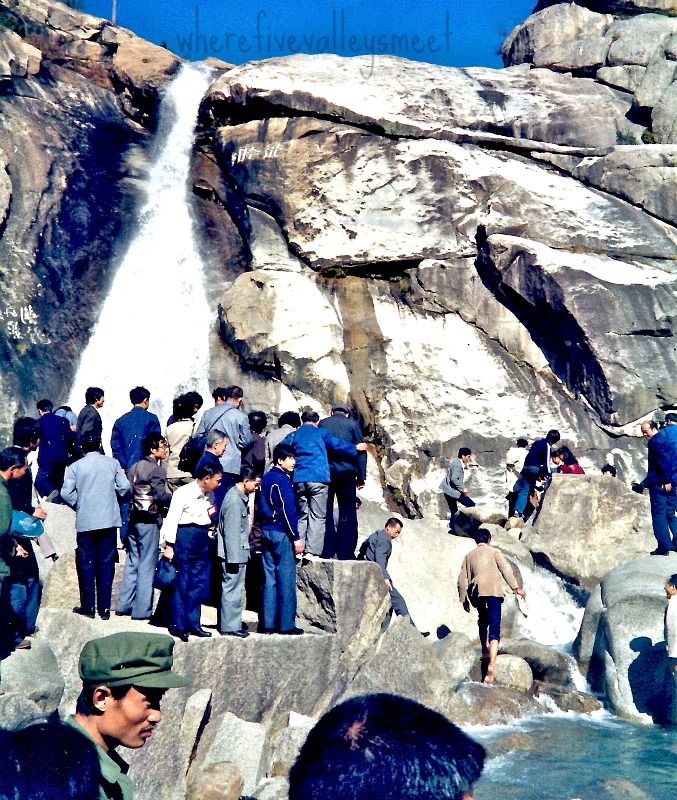 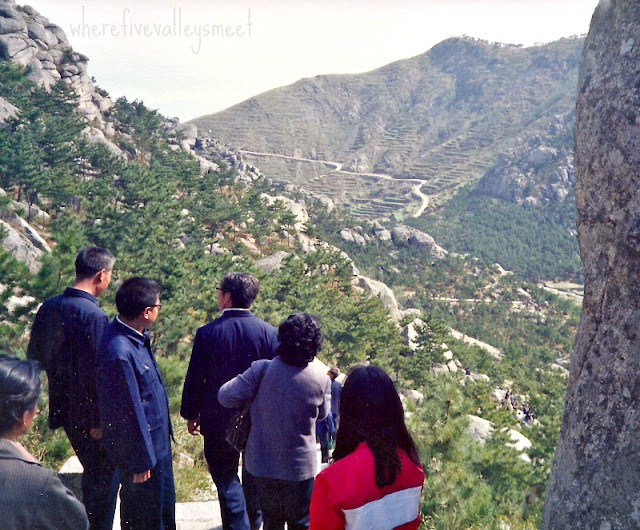 Walking down the mountain on the other side with our hosts and our minder Madam Wu. The girl in red was our interpreter, Zhu Fang, she was a lovely young girl and showed the first signs of change being in the air with her bright coloured outfits and long hair. She told me she had wanted to be a school language teacher, but had been directed to Qingdao to be an interpreter hundreds of miles from her home. 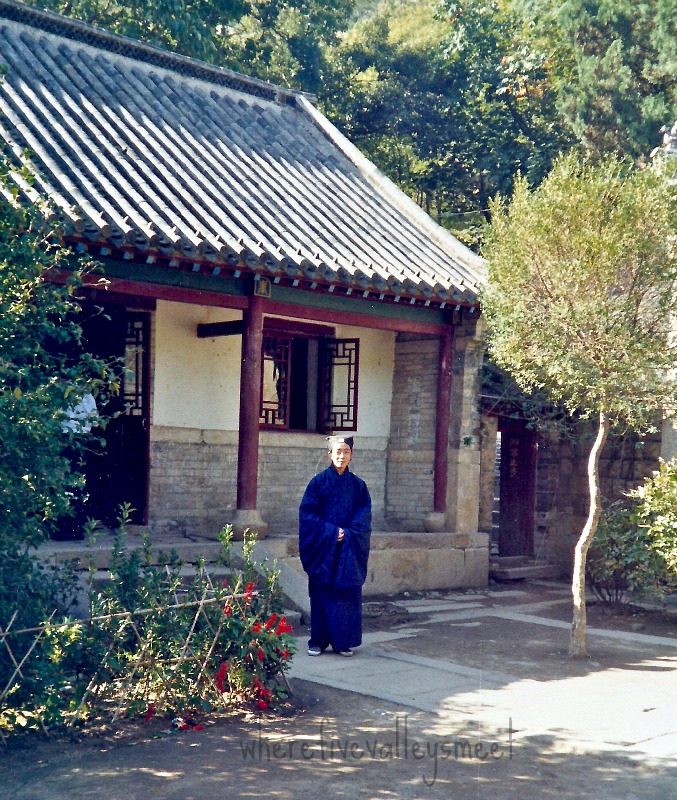 Taoist Monk
When we reached the bottom of the mountain we were take to Taiqing Palace (a Taoist monastery) where a banquet had been laid on for us. 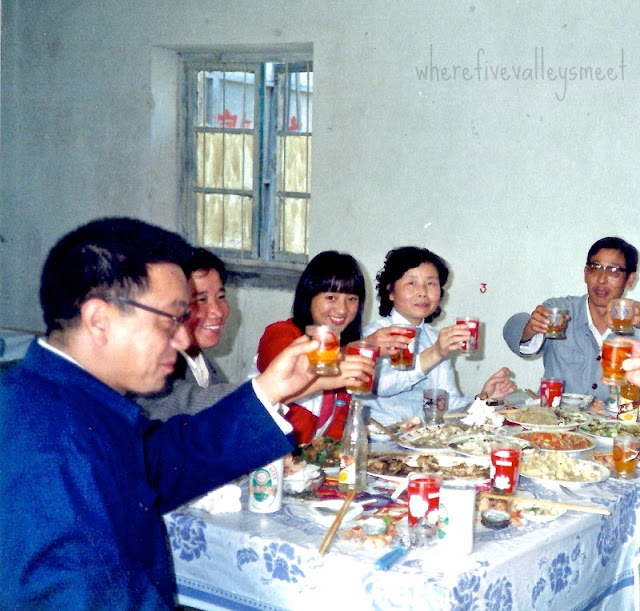 The banquet with some of our hosts.
The next post in this China series will be the difficulties we experienced travelling from Qingdao to Shanghai.
Posted by Rosemary at 08:05