View first and second posts here
Initially, we had set out for China 12 months earlier. We had arrived at Heathrow ready to travel to Paris where we would be catching an Air France plane to Beijing, only to find that the French Air Traffic Controllers had gone on a lightning strike. There was nothing for it, but to return home and for the UN to contact China to inform them. Our travel arrangements in China were quite complicated and it took another year to rearrange everything. 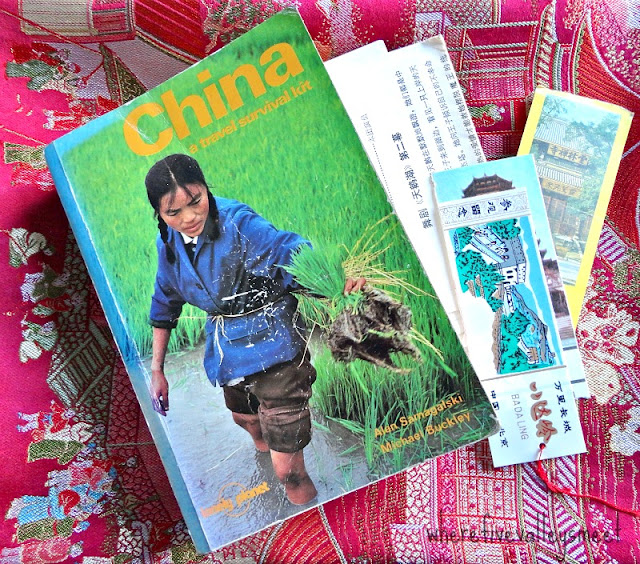 A year later as we once again embarked on our Chinese odyssey, 'China' the very first edition of the Lonely Planet guide was published. The book was packed with everything you needed to know when travelling in China. It became compulsive reading, our bible, which we always kept close at hand.
On our last evening in Qingdao before flying to Shanghai I looked up what the book had to say about CAAC - Civil Aviation Administration of China - these carriers are the only domestic flights available within China. I learnt that CAAC also stands for China Airlines Always Cancels (the biggest excuse being bad weather) but more importantly China Airlines Almost Crashes. This information was the last thing that I needed to know. I said to H "have you read the chapter on CAAC?" his reply "it would have been far better if you had not read that!!!"
The tales surrounding CAAC were legendary, the one that I particularly recall is this one: passengers watched the pilot returning from the toilet to find he was locked out of the cockpit by a jammed door. The co-pilot opened the door from within, then both men fiddled with the catch and succeeded in locking themselves out of the cockpit. As passengers stared in disbelief the pilot and co-pilot attacked the door with a fire axe, pausing for a moment to draw a curtain between themselves and the audience.
This story made me feel even more nervous, but for goodness sake these were just folktales!!! weren't they?
On looking out at the night sky everything appeared to be looking good for the following day. 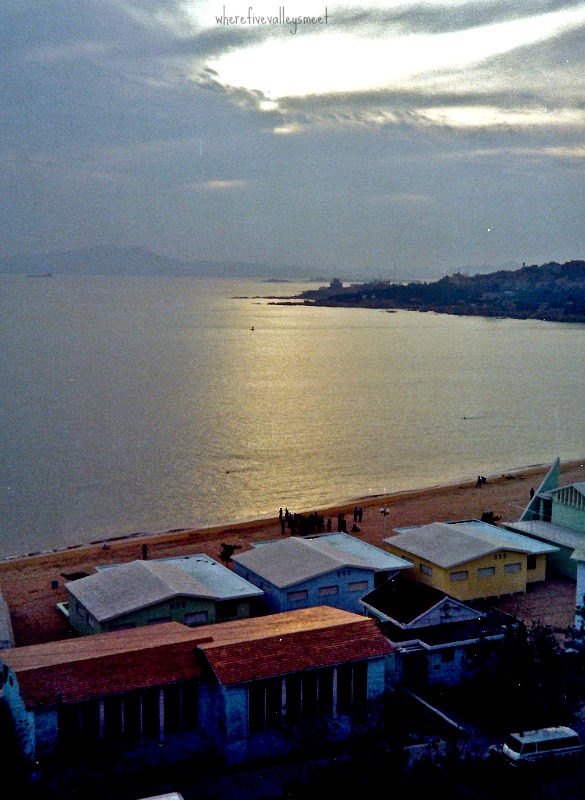 Evening in Qingdao
In the morning we gazed at a brilliant blue cloudless sky, the air was calm, nothing stirred, and thought the day could not be more perfect for our trip. We came down into the hotel foyer to be greeted by our hosts who informed us that CAAC had cancelled our flight due to bad weather conditions!!! and that they would return for us in the morning - alarm bells began seriously clanging in my head. 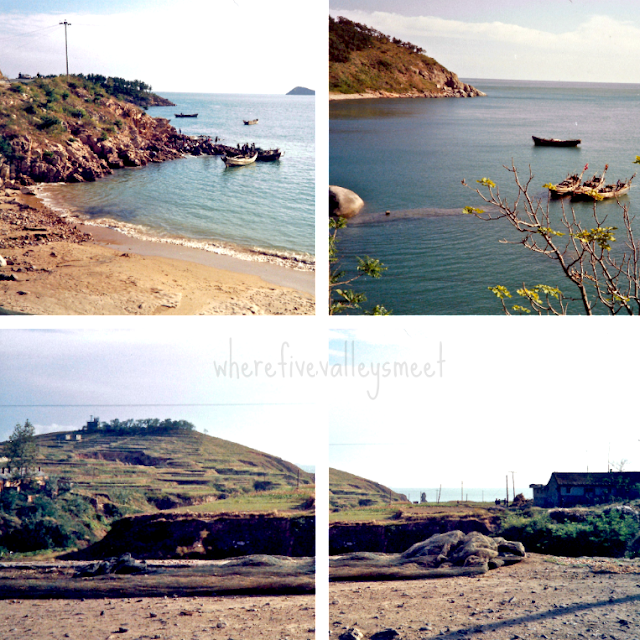 H took advantage of this time to relax a bit and decided to take a swim in the sea. We had been watching people swarming all over the beach every day turning over every stone and boulder in search of anything that moved to put in their baskets for the cooking pot.
I watched H walk back up the beach from his swim when suddenly he became surrounded by young men. They came up to the middle of his chest, all I could see was H in his swimming costume surrounded by a ring of heads. They wanted to know whether there was a 'backdoor' to success in Britain and his views on so many different topics. 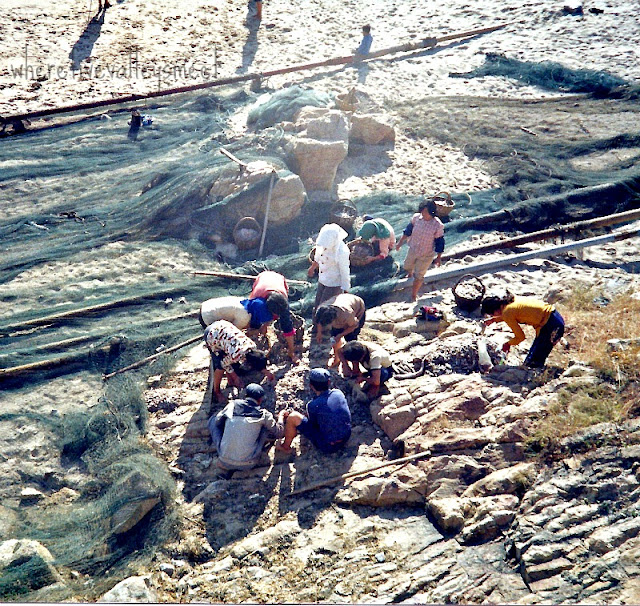 The following morning we came downstairs in perfect weather again only to be told the flight was cancelled, but finally on the third morning we were on our way.
We never imagined the airport would be such a long journey away. Our vehicle bounced along deeply rutted mud roads with big old trucks abandoned along it. Some had men crawling all over the bonnet in a vain attempt to get them moving again.
The airport was an eye opener. A vast area of scrubland covered in Russian military MiGs under wraps, but where was the airport? There was only one small building not much bigger than a public convenience and that turned out to be it. It was dark by the time the Shanghai plane arrived, there was no runway, just a rough area  that was lit up by switching on the lights from parked lorries.
Our plane was a vintage Russian turbo-prop. The services - basically there were none. We climbed up a ladder to get in the plane, and to our dismay discovered that all of the passengers luggage was in the cabin with us sitting loosely on the spare seats!!! now I was getting really anxious and wondered whether I would ever see my two beloved sons back home in the UK again. 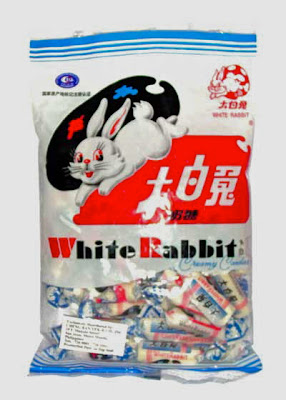 via wikipedia
The air hostesses handed out little bags of strange White Rabbit creamy sweets - our only form of refreshment. I sucked hard on them as I noticed via the light of the moon string tied around the turbo-prop as if holding it together.
What a relief to see the bright lights of Shanghai and to land safely.
Having passed through customs our next surprised was to find that the Harbour Master of Shanghai and his retinue had been waiting for us at the airport for the past three days. Nobody had bothered to inform them of our delay, we were upset for them, but it was all out of our hands. They just accepted it in a good natured smiling spirit as if it was normal, and then hastily whisked us away for our first Shanghai banquet. 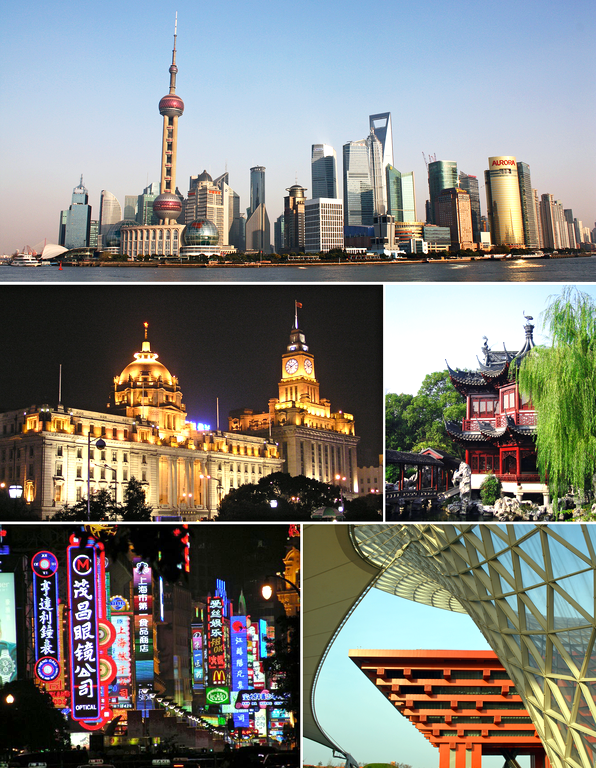 courtesy wikipedia
Shanghai today, definitely not the Shanghai we saw.
Next post Shanghai to Hangzhou
Posted by Rosemary at 08:04