The weather has done a complete somersault, there are shafts of pale gold light playing on the windows, forget-me-not blue skies, and long shadows dancing across the meadows. It even feels warm out in the sunshine, a moment to savour, pack a picnic, and be outdoors.
Having received some interesting comments on my last post regarding the Saxon cross, it rekindled my interest in two local Saxon buildings. 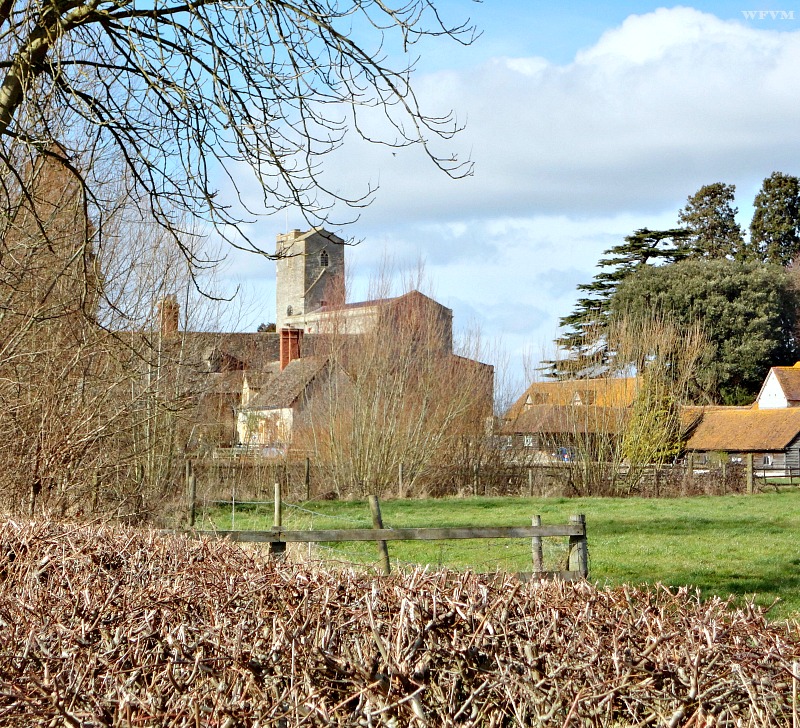 Deerhurst is a small hamlet consisting of a farm and a handful of houses lying in a vale close to the mighty River Severn. It has the very rare distinction of having both a Saxon Priory, now the parish church, and a Saxon Chapel. 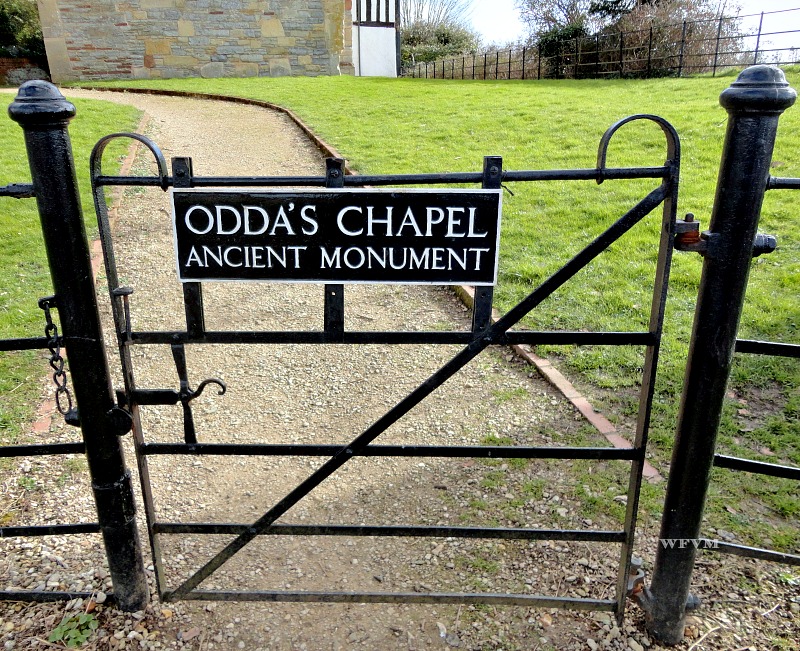 Odda's Chapel is one of the most complete Saxon churches in England, and dates to the period shortly before the Norman Conquest. It was completed in 1056 by Earl Odda who was one of the most powerful of Edward the Confessor's nobles. It is just a simple two cell church composed of a nave and chancel and appears to have fallen out of use during the C13th 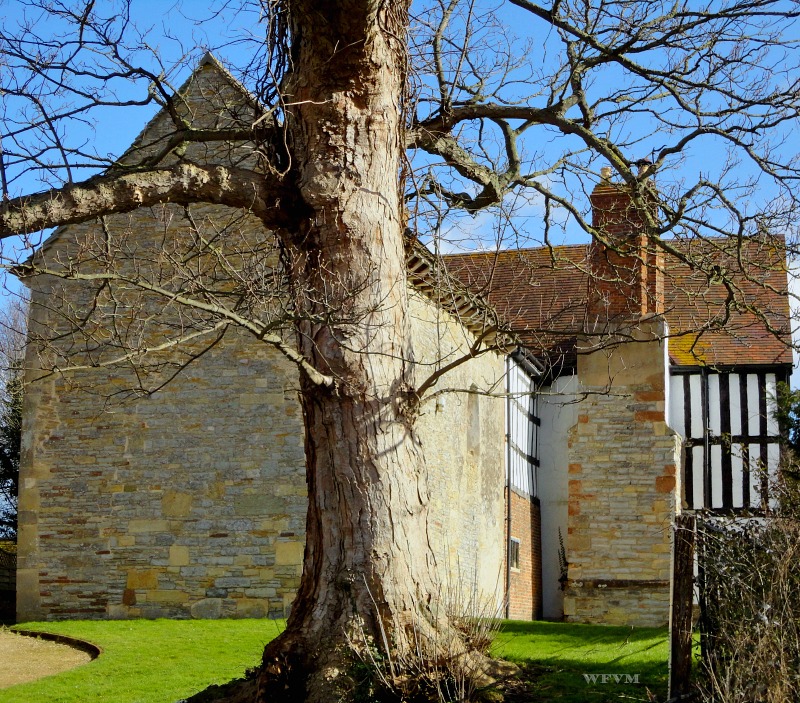 During the C16th a large Tudor farmhouse was built called Abbots Court, and the Saxon chapel was incorporated into it. The chapel nave was used as a kitchen and the chancel as a bedchamber; all memory of the chapel was thus forgotten. It was undiscovered for centuries, its walls hidden amidst the rambling rooms of the farmhouse.
In 1856 the Rev. George Butterworth, a scholar, was intrigued by an entry he found in the chronicles of Tewkesbury Abbey which described a church opposite the entrance to Deerhurst Priory. 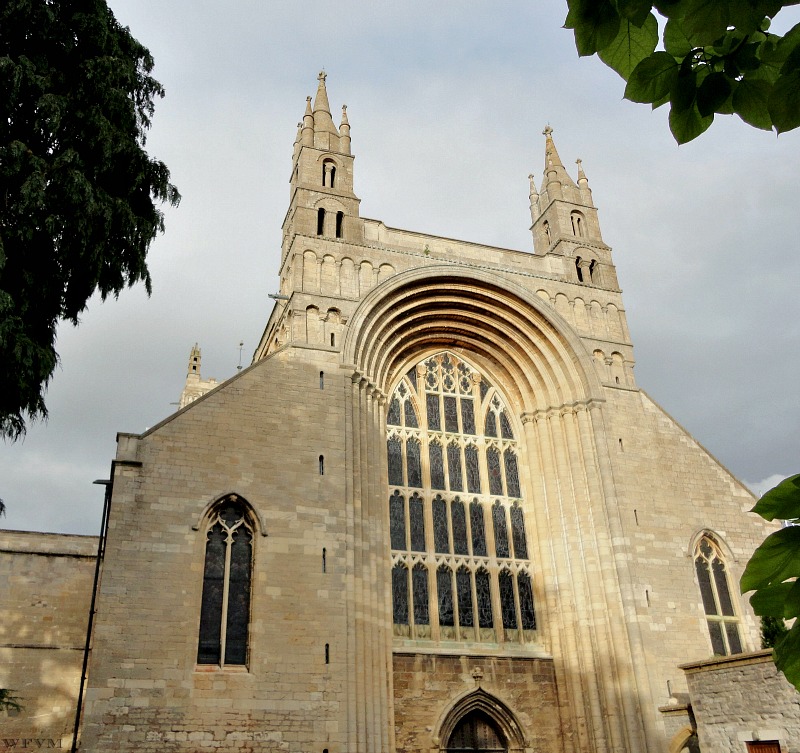 Tewkesbury Abbey with its very tall unique Norman arch which 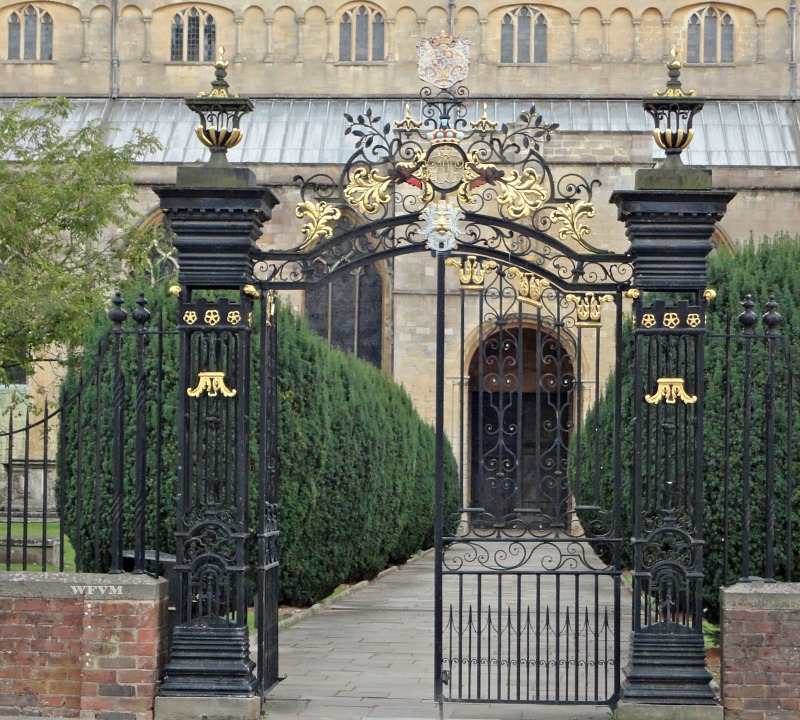 dwells just 3 miles north of Odda's Chapel
The Rev. Butterworth's second clue as to the whereabouts of the Saxon Chapel was even more compelling; it was the famous Saxon carved Odda's stone discovered in 1675 in a local orchard near to the Priory. 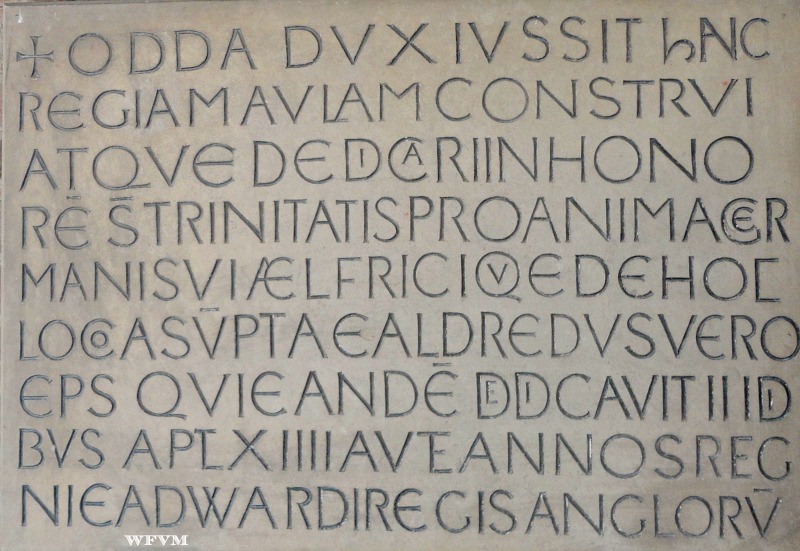 Latin translation
Earl Odda ordered this royal chapel to be built and dedicated in honour of the Holy Trinity for the good of the soul of his brother Aelfric who died in this place. Bishop Ealdred dedicated it on April 12th in the 14th year of the reign of Edward, King of the English
i.e. in 1056 in the reign of Edward the Confessor
The above stone is an exact replica of Odda's stone which is now preserved in the Ashmolean Museum, Oxford 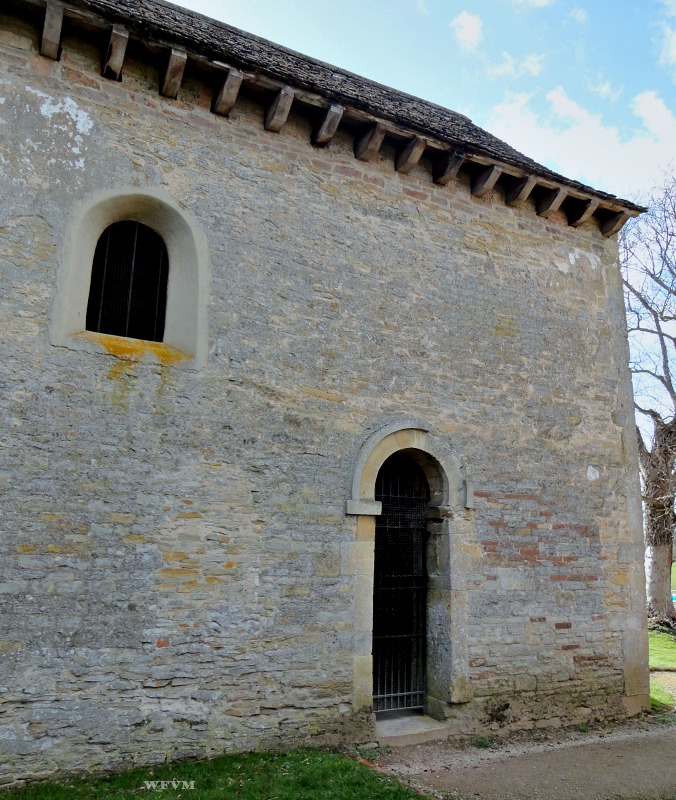 The North door and double splayed arched window showing Anglo-Saxon stonework. Other typical Anglo-Saxon features are the long and short stone quoins at the corner and the chapels tall proportions 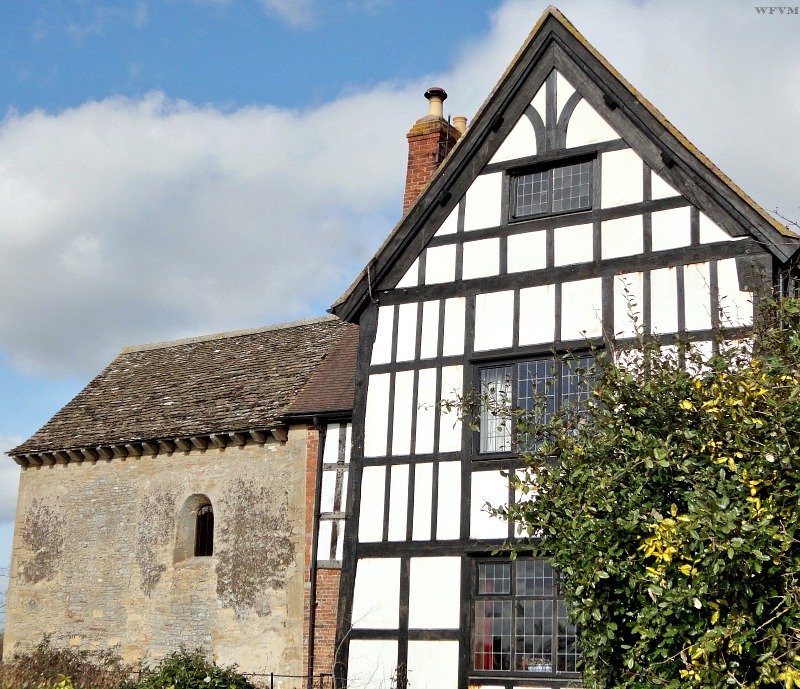 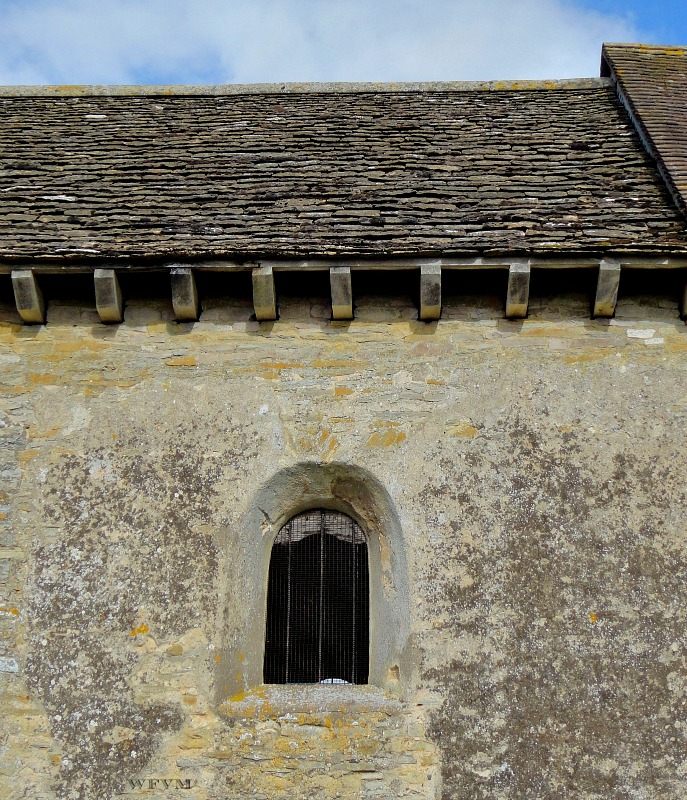 The south window still has some original oak framing, and at the bottom you can just see the arch from the north window showing 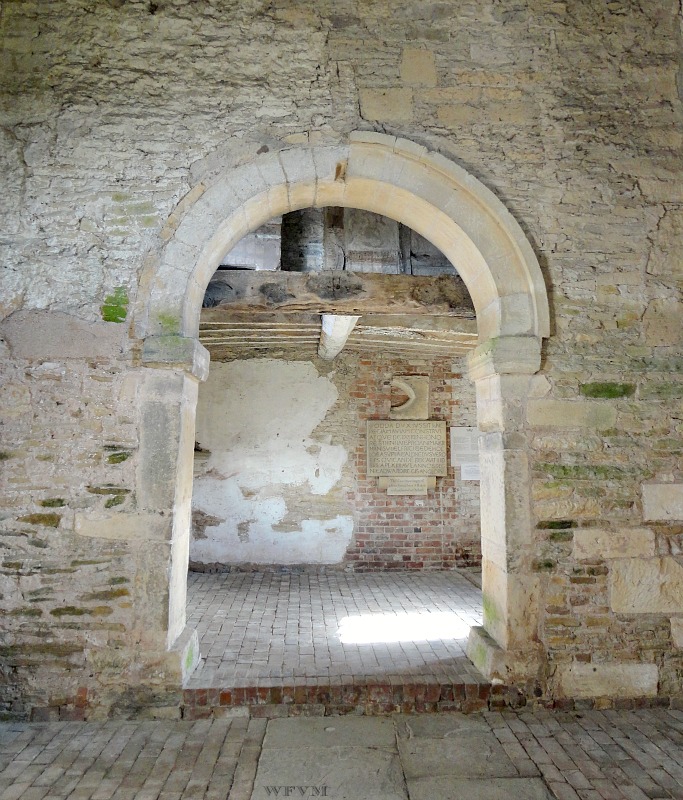 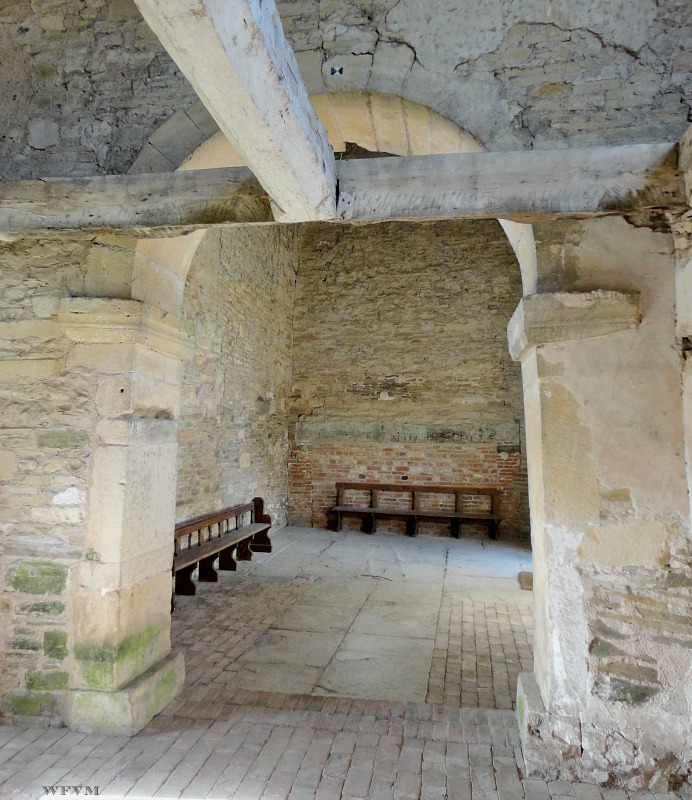 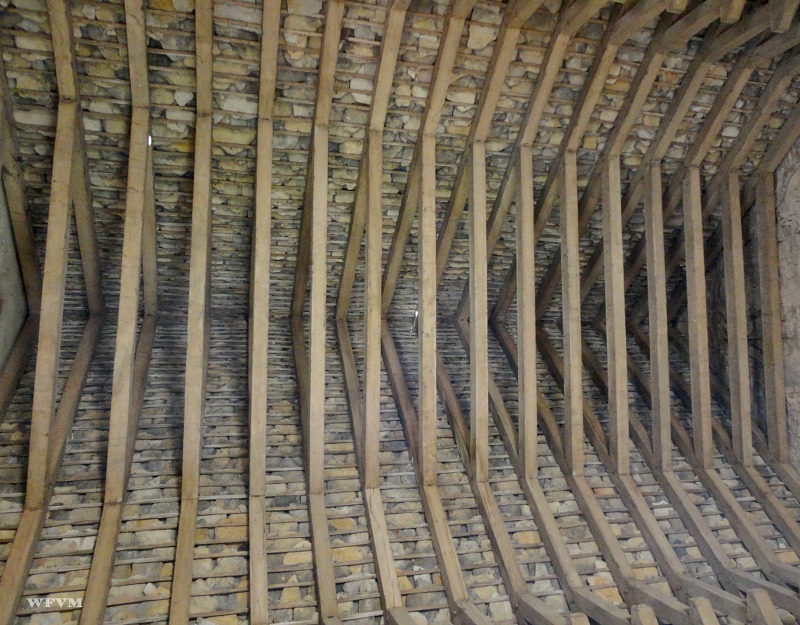 A Little Sanctuary
by Admiral R A Hopwood
In the quiet Severn Valley, where it seemed as if at last
Very peace had spread her wings on ev'ry hand,
Stood an old and battered farmhouse, where for generations past
Dwelt the yeomen and the tillers of the land.
Till in time the hand of progress came to try what could be done,
Both to modernise and renovate with care,
So they chipped away the plaster of the ages dead and gone
And they found - a little Saxon Chapel there.
***************

The Saxon Priory, now the Parish Church of St. Mary's, is a two minute stroll away from the Chapel. I will show it in the next post, it is home to some of the oldest and rarest Saxon stone work.
Posted by Rosemary at 08:56