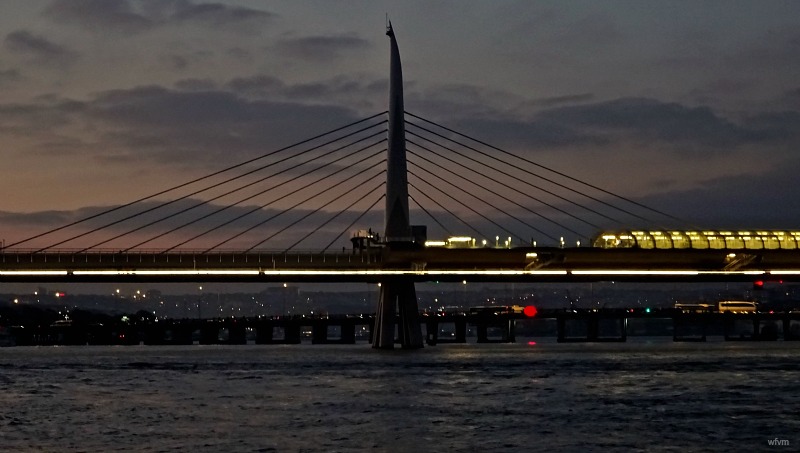 Istanbul, a vibrant metropolis, once known as Constantinople, standing on both sides of the glittering Bosporus Straits straddling the cross-roads between Europe and Asia 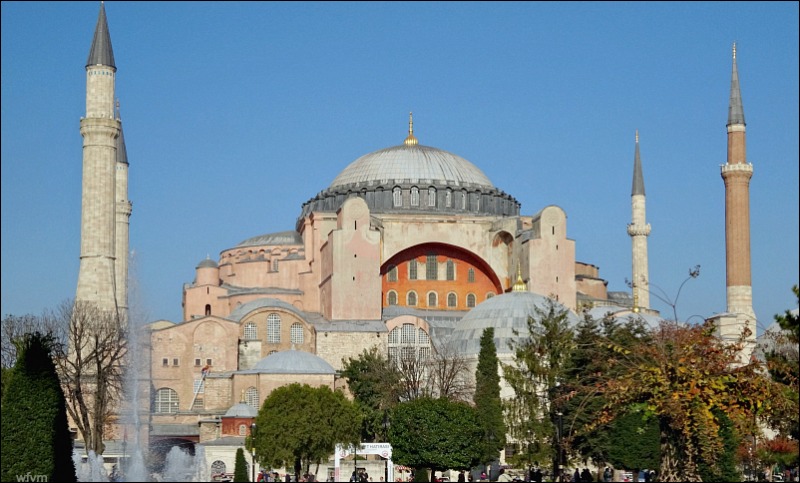 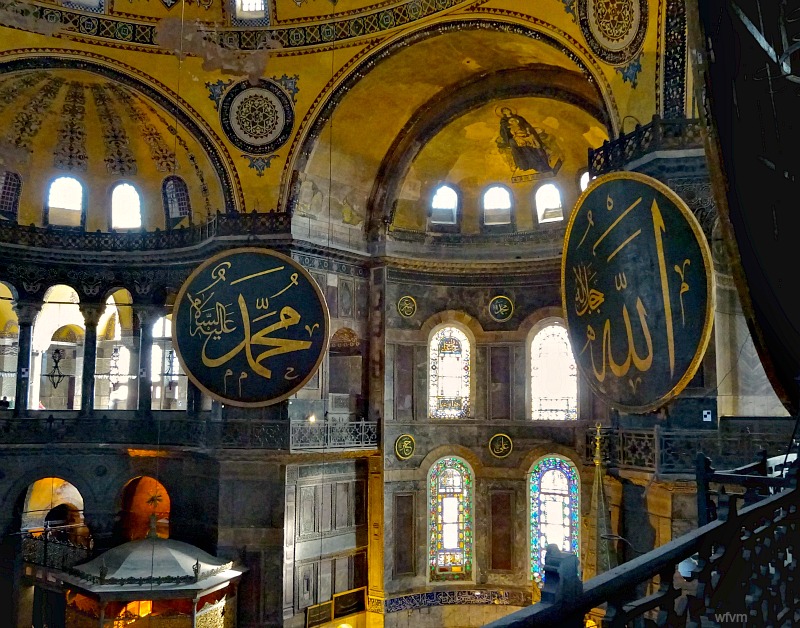 Across the centuries Hagia Sophia has been reincarnated countless times - her interior reveals her history. Used as a church for 916 years until the conquest of Istanbul by Fatih Sultan Mehmed, when she was then converted into a mosque for 482 years. In 1935 under orders from Atatürk she became a museum where Christian and Muslim symbols hang together side by side. 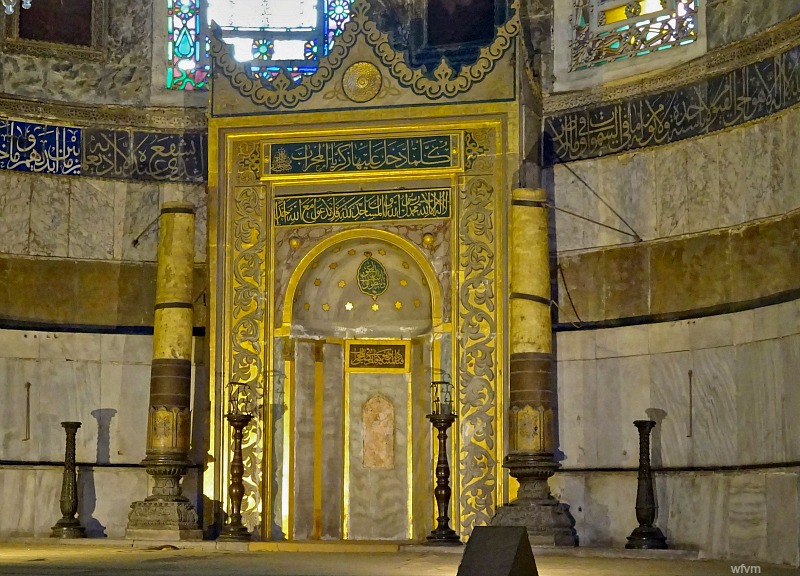 Here an altar once stood, now occupied by a mihrab pointing towards Mecca 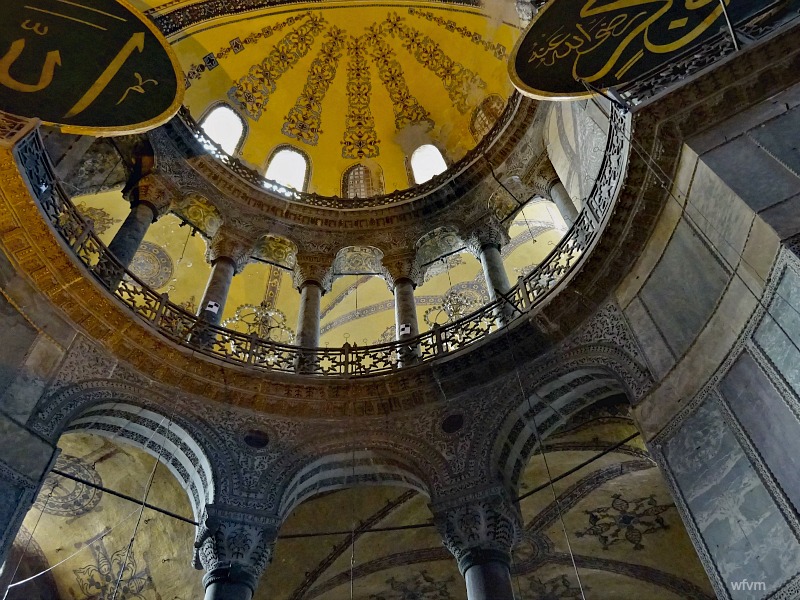 Hagia Sophia is one of the greatest surviving examples of Byzantine architecture, and is decorated with mosaics, marble pillars, and paintings of great artistic value. It is so richly decorated that Emperor Justinian proclaimed, "Solomon, I have outdone thee!" His expenditure on Hagia Sophia is said to have weighed in at 20,000 pounds of gold 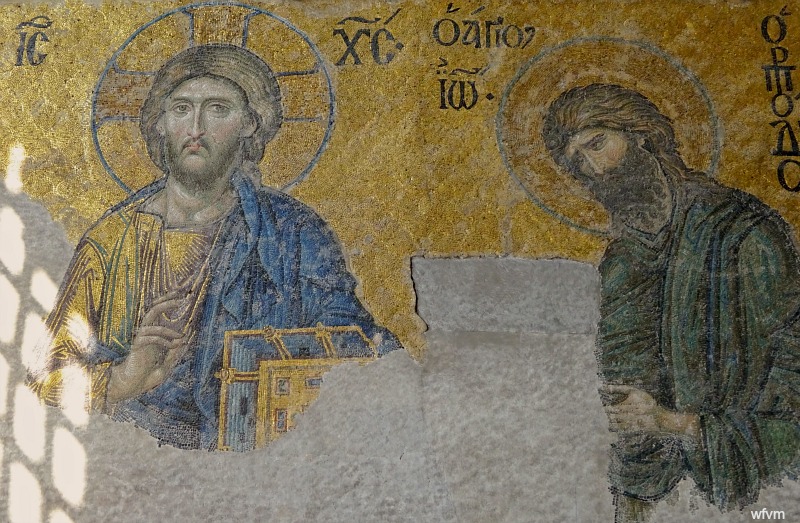 Many of the notable mosaics are in the Upper Gallery known as the Loge of the Empress - the one above is the Deësis mosaic dating from 1261. Commissioned to mark the end of 57 years of Roman Catholic use and a return to the Orthodox faith. It is widely considered to be the finest in Hagia Sophia because of the softness of the features, the human expressions, and the tones used. The style is close to that of Italian painters during the late C13th/early C14th such as Duccio. 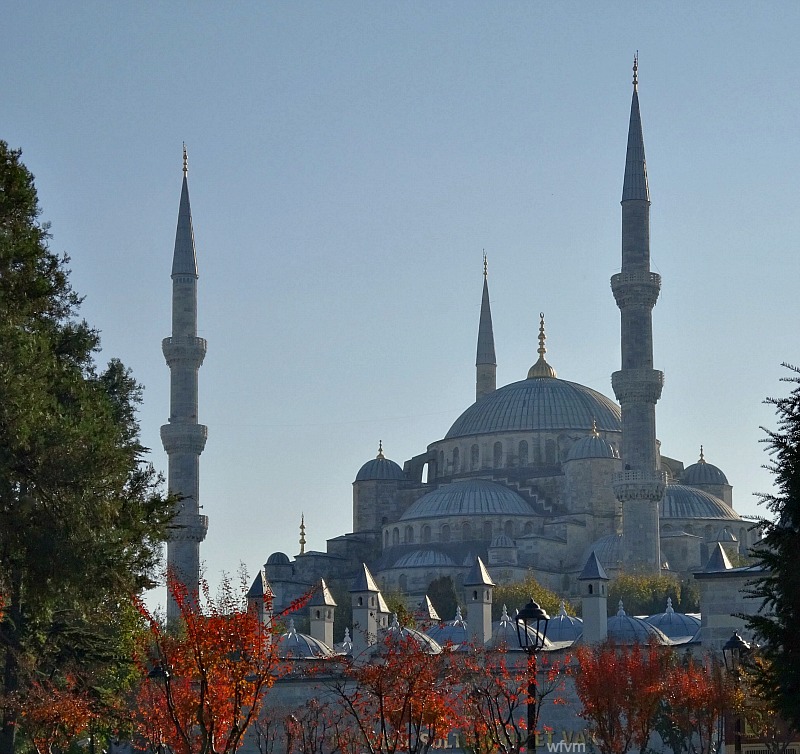 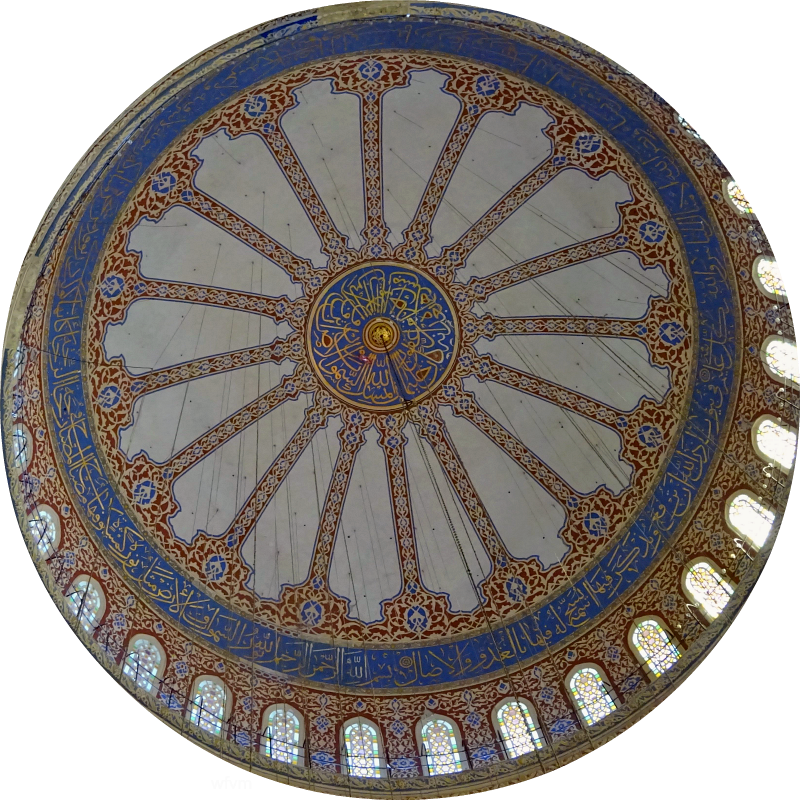 The Blue Mosque, has one main dome, six minarets, and eight secondary domes. It incorporates some Byzantine Christian elements seen in Hagia Sophia along with traditional Islamic architecture, and is considered to be the last great mosque of the Classical period. The interior is lined with more than 20,000 handmade Iznik ceramic tiles, many showing different tulip designs. Did you know that tulips came to Europe from Turkey? They are native to Turkey and Central Asia. 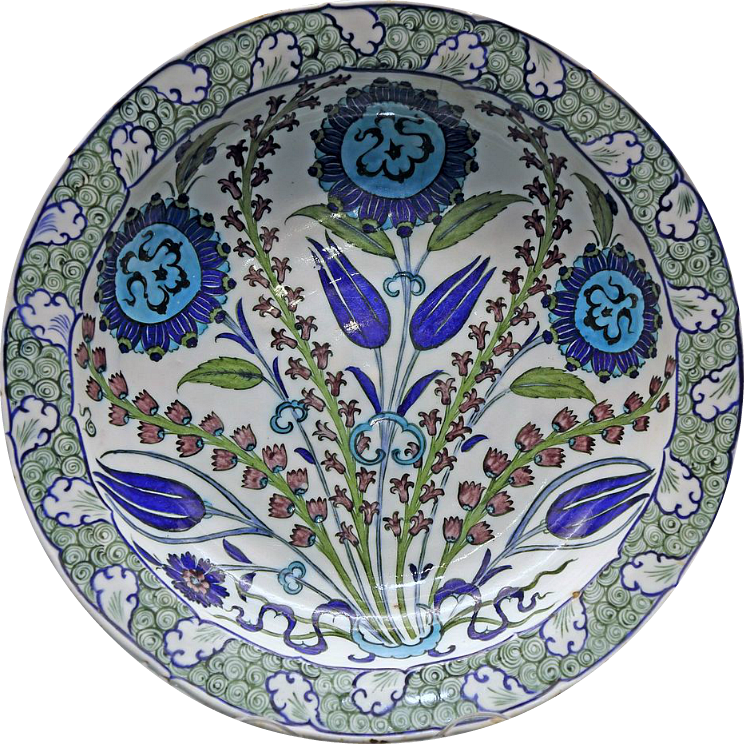 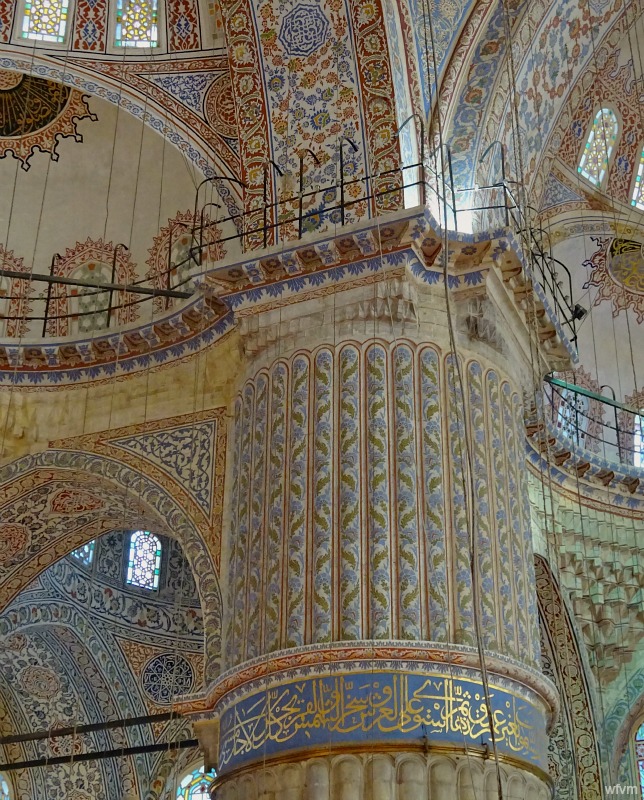 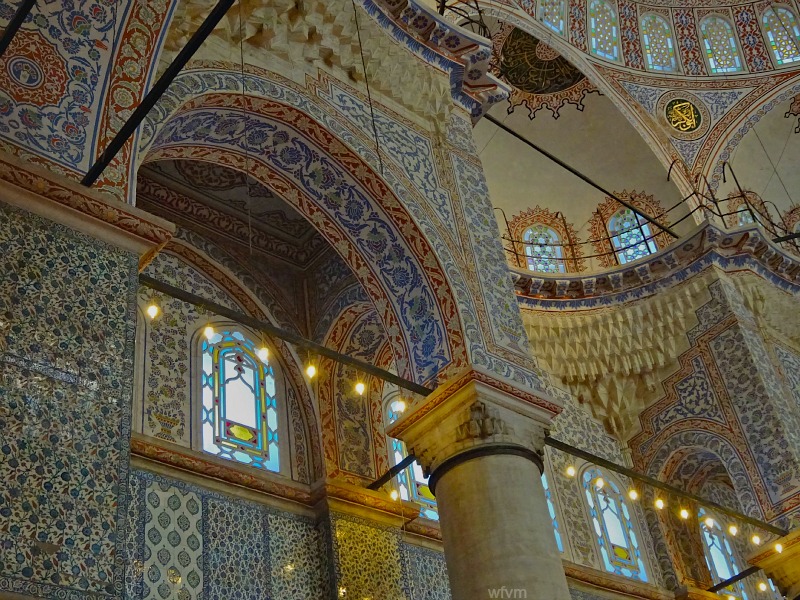 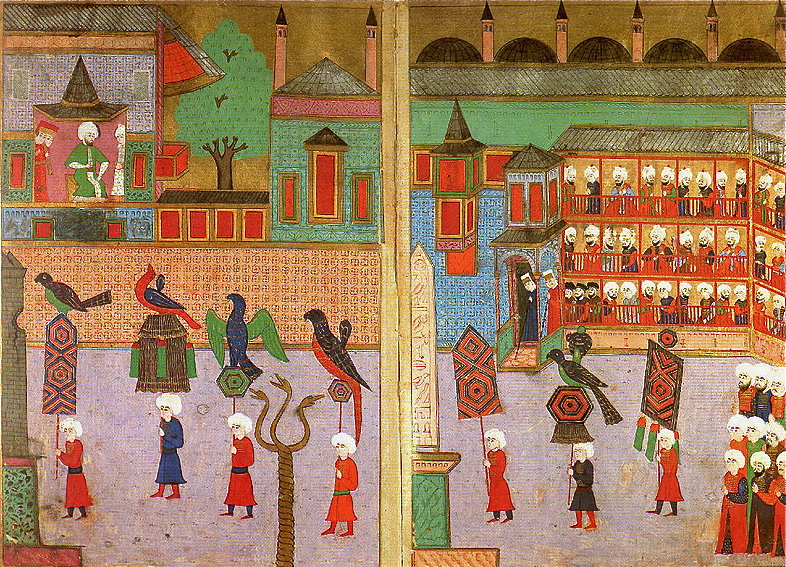 via
Procession of the guilds in front of the Sultan
at the Hippodrome, now called Sultan Ahmned Square from an Ottoman miniature - 1582

The Hippodrome was a sporting and social centre - the word Hippodrome comes from the Greek 'hippos', horse, and 'dromos', path or way.  Horse and chariot racing were popular pastimes in the ancient world and hippodromes were common features of Greek cities in the Hellenistic, Roman and Byzantine eras.
In what is now the Sultan Ahmned Square there remain a few pieces from antiquity such as the sculptural spiral bronze base shown above in the miniature and also in the photo below. However, the square is much depleted compared to the glory days of Emperor Constantine the Great when the central island was lined with bronze statues of horses, charioteers, gods, emperors and heroes. Amongst them was a magnificient statue of Heracles by Greek sculptor Lysippos, one of the greatest sculptors of the Classical Greek era during the C4th BC.

Made from bronze this spiral base once held a three-headed serpent which was brought to the Hippodrome from Delphi, Greece - the serpent's heads are not, however, lost but reside in the Archeological Museum located nearby. 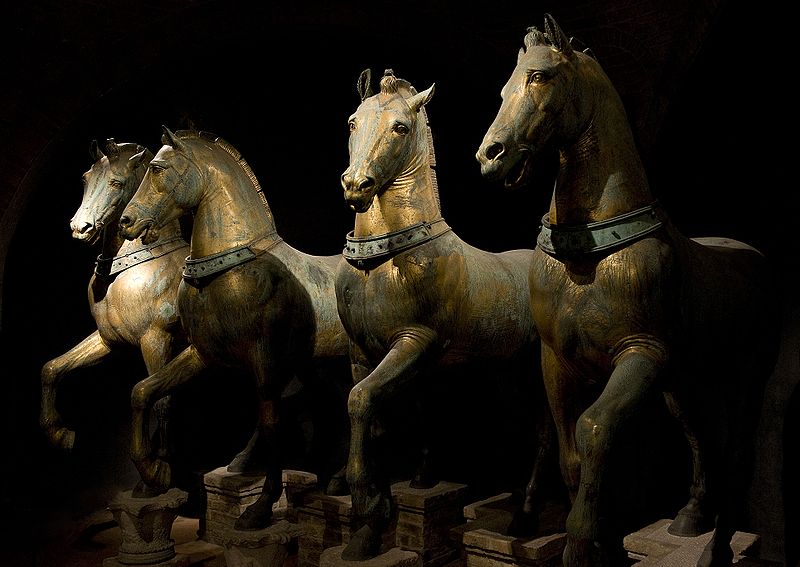 via
When I last visited Istanbul several years ago, I discovered that the four gilded bronze horses that now reside in Venice, had originally stood on top of the imperial box in the Hippodrome used by the emperor and other members of the family. Their exact Greek or Roman ancestry has never been determined, but they were looted, from what was then Constantinopole, during the Fourth Crusade in 1204 and installed on the façade of St. Mark's Basilica in Venice. 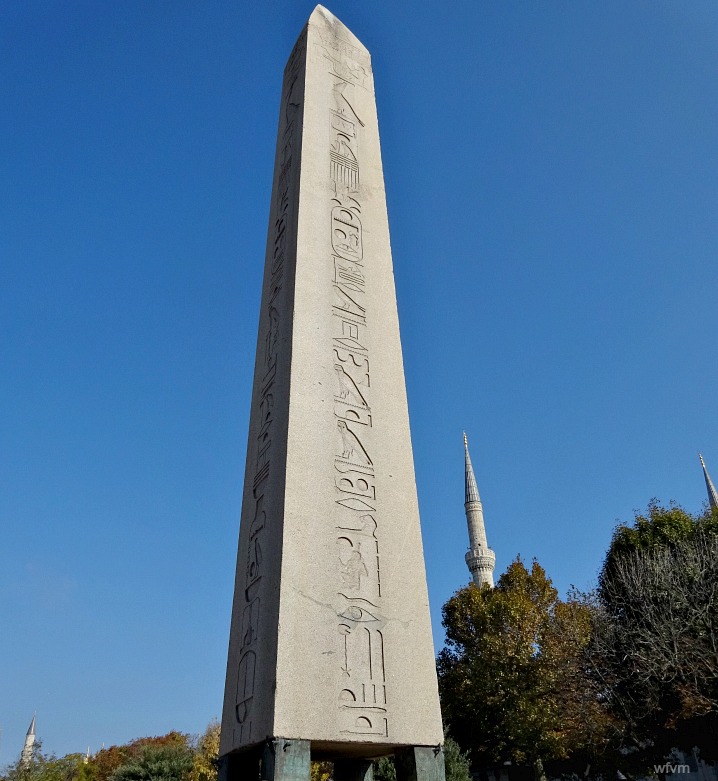 Another survivor in the Hippodrome is the Egyptian Obelisk, the oldest monument in Istanbul 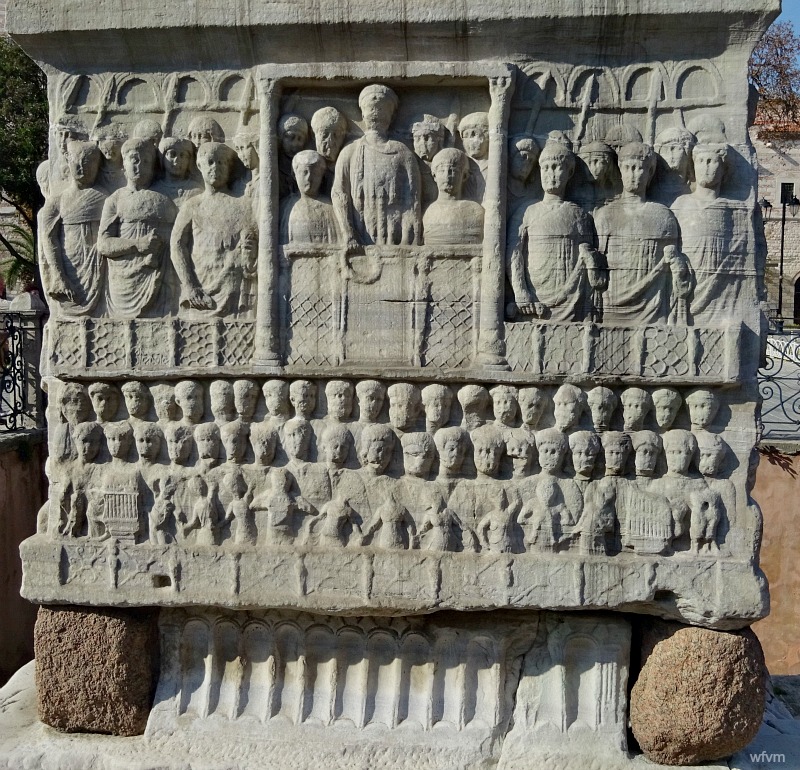 The obelisk was erected by the Emperor Theodosius in 390, but was originally set up by Thutmose III - 1479-1425 BC at the great temple of Karnak in Egypt. It is made of red granite from Aswan, between the four corners of the obelisk and this marble base pedestal are four bronze cubes used in its transportation and erection.  Each side of the marble base is engraved - on this side Theodosius l offers a victory laurel
Watch this video in full screen and you will see the obelisk, the spiral bronze base with its three headed serpent, and the four horses above the Imperial box 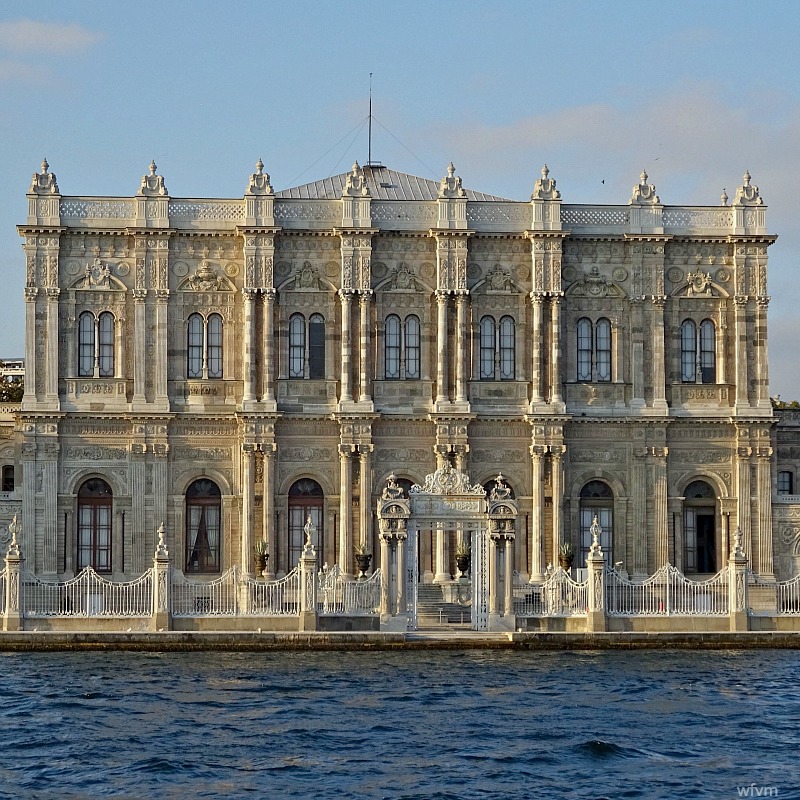 Seen from the water, Beylerbeyi Palace, meaning 'Lord of Lords', is located on the Asian side of the Bosphorus. An Imperial Ottoman summer residence built in the 1860s by Sultan Abdülazis as a place to entertain visiting heads of state. Empress Eugénie of France visited on her way to the opening of the Suez Canal in 1869 and had her face slapped by the sultan's mother for daring to enter the palace on the sultan's arm. Despite this Eugénie was so delighted by the elegance of the palace that she had a copy of the window in the guest room made for her bedroom in the Tuilieries Palace in Paris. Other royal visitors were the Duke and Duchess of Windsor. 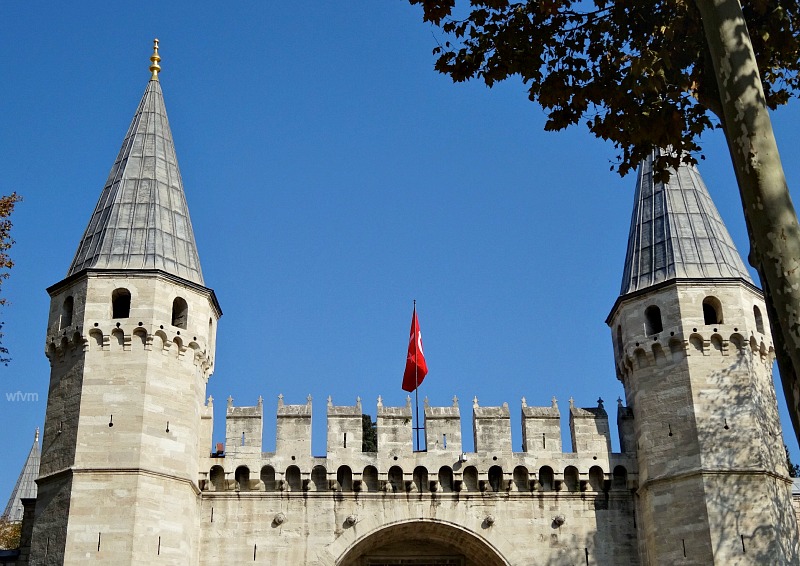 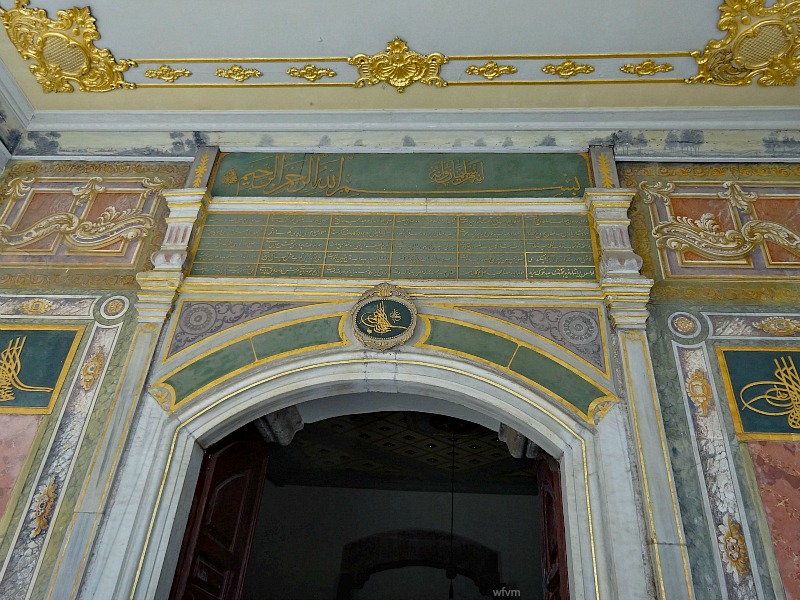 The Gate of Felicity in Topkapi Palace gave access to the Inner Court and what were strictly private areas. It is here that the Ottoman sultans once ruled their empire. On religious, festive days, and accession, the sultan would sit before this gate on his Bayram throne whilst his subjects and officials paid him homage 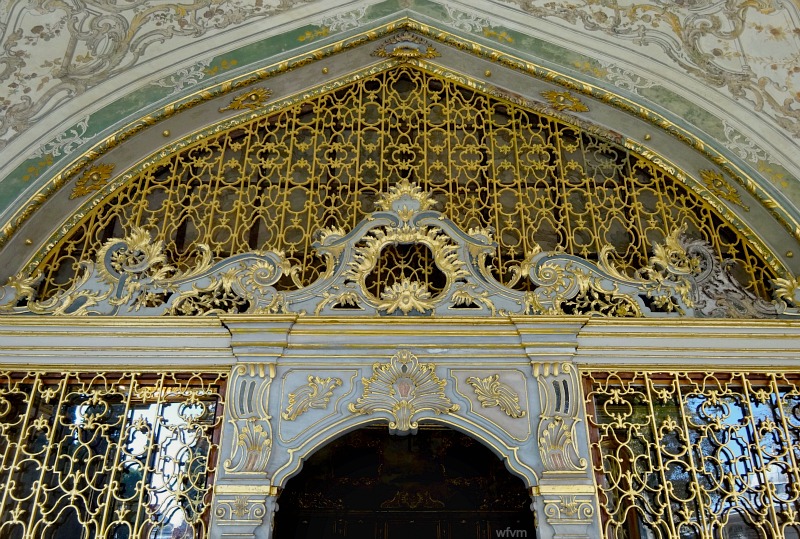 The palace is a huge, an elaborate complex which could take many days to explore. It also contains holy relics from the Muslim world including Muhammed's cloak and sword. 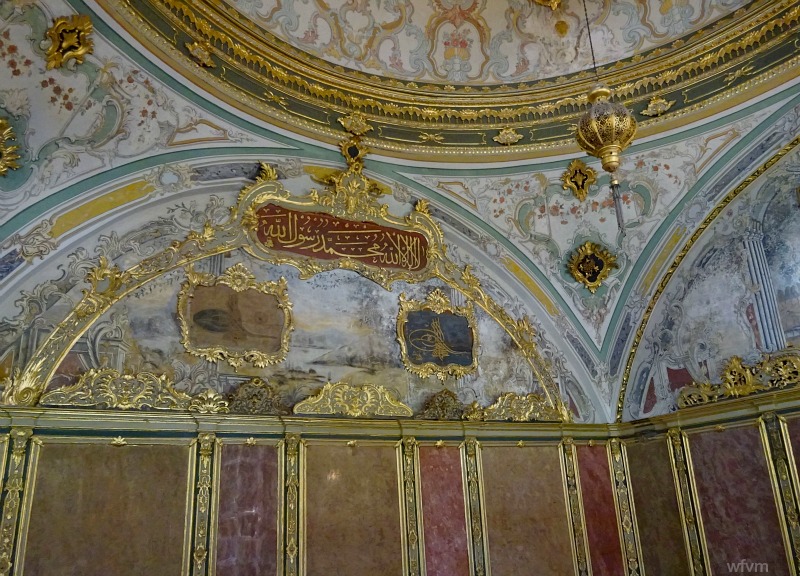 At its peak the palace was home to 4,000 people 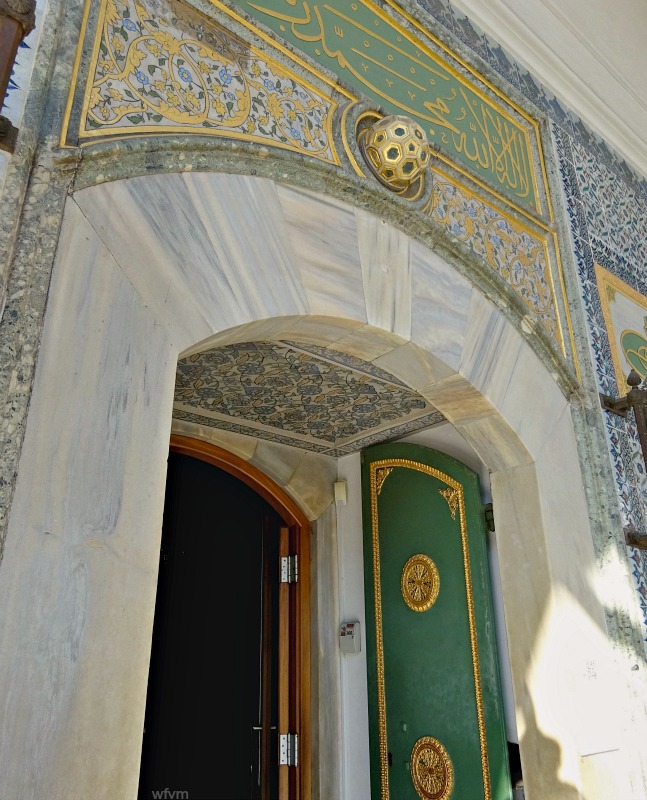 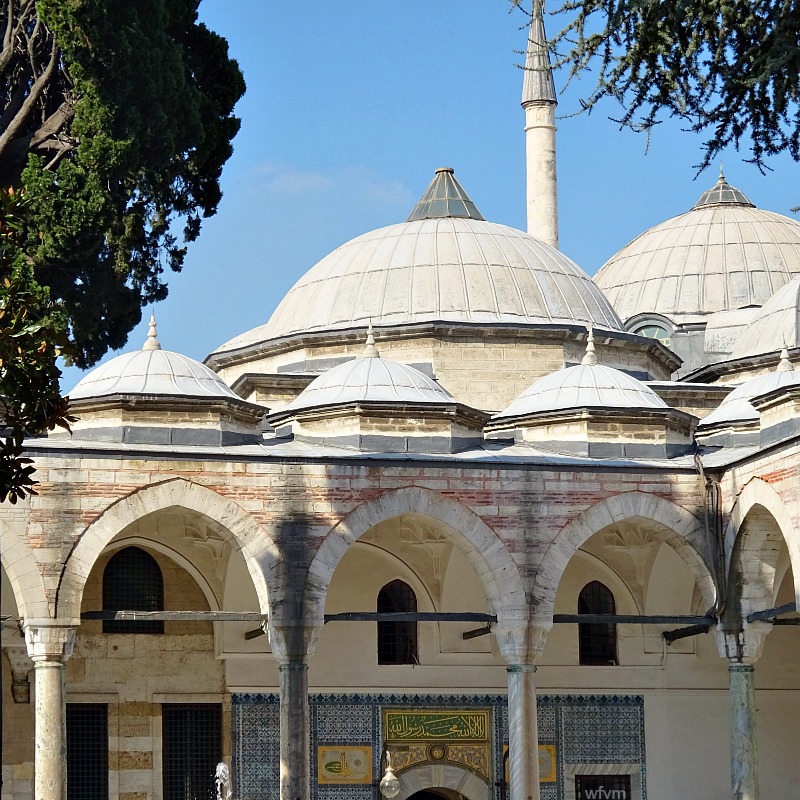 Our journey continues in the footsteps of Alexander the Great to Asia Minor
Posted by Rosemary at 07:33