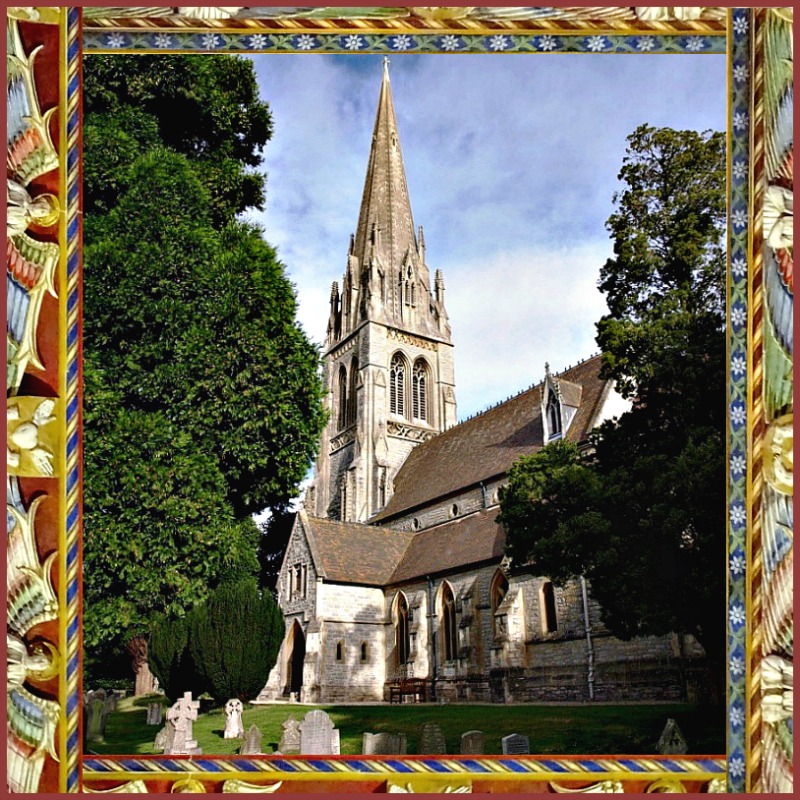 ✣The church of Holy Innocents is Grade 1 listed, and was described by John Betjeman as "The most complete and significant Victorian church in the country"✣
Holy Innocents was designed and built in less than two years for Thomas Gambier Parry between 1849 and 1851. The Architect was Henry Woodyer, a pupil of William Butterfield and a disciple of A.W.N. Pugin.
The church of Holy Innocents is Parry's personal memorial to his beloved wife, Isabella, and to three of their children who died in infancy.
As I entered the church I reflected on a visit made in 2015 to the Taj Mahal, 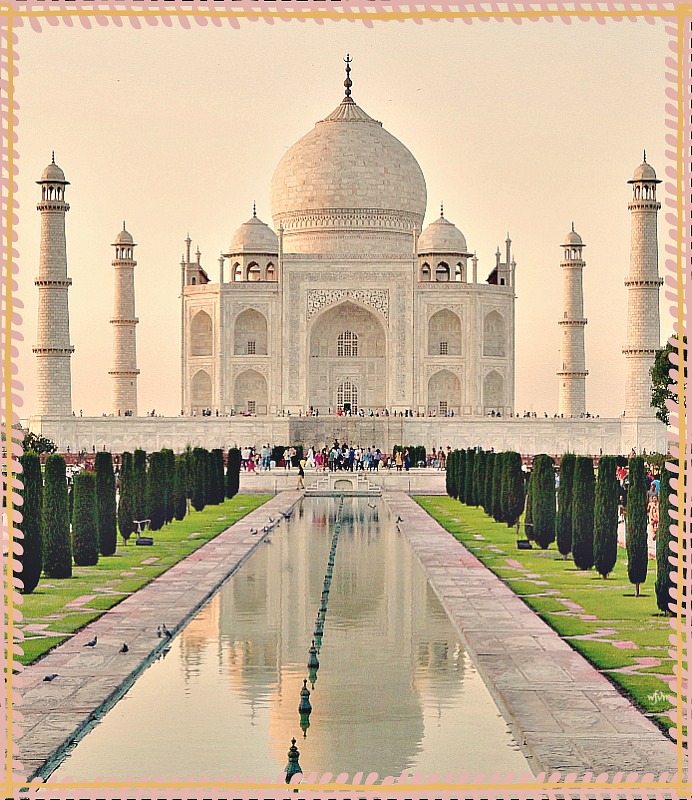 Sunset
where a heartbroken Emperor Shah Jahan also built a profound monument to his much favoured third wife, Mumtaz Mahal, a Persian princess, who had died giving birth to their 14th child.
※ ※ ※ ※
Gambier-Parry painted most of Highnam's interior himself, including the high vaulted ceiling. He used a new 'spirit fresco' method that he devised from his study of Italian fresco painters. 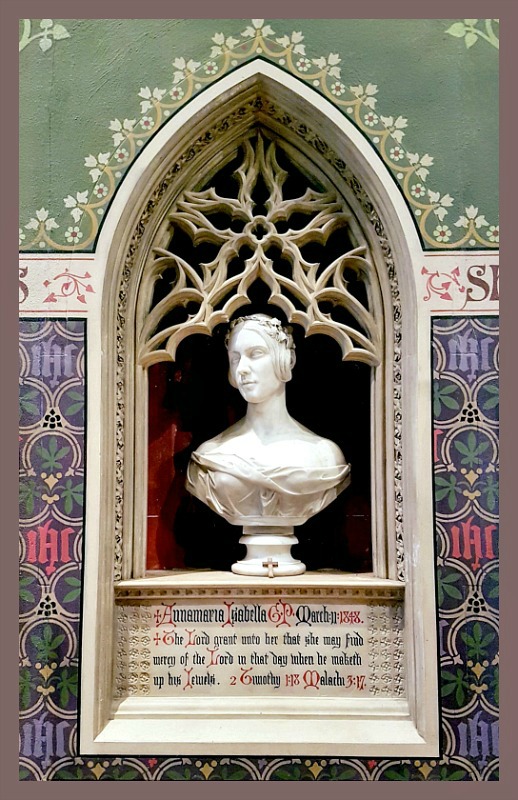 Isabella died 1848
When Highnam church was finished in April 1851, one of Parry's three surviving children, a son, Clinton Charles, wrote "On the eve before the consecration, when all of the guests had gone to bed, and the new church stood in silence under the moon, father made his way there alone. He carried in his arms a marble bust of Isabella which he placed in a niche within the small private chapel".
Today, the bust of Isabella remains in the same spot where Gambier Parry set it to rest.
Isabella was 32 years old when she died of Tuberculosis. It was just 12 days after having given birth to a son, Charles Hubert, who as an adult became Sir Charles Hubert Parry, the proclaimed English composer, teacher and historian of music. He became head of the Royal College of Music and Professor of Music at Oxford University. He wrote the choral music to accompany Blake's poem Jerusalem..... "And did those feet in ancient time", and also wrote the coronation anthem "I was glad".
No expense was spared at Highnam. Parry even concealed the cost from himself by having all the bills go directly to his bank manager. 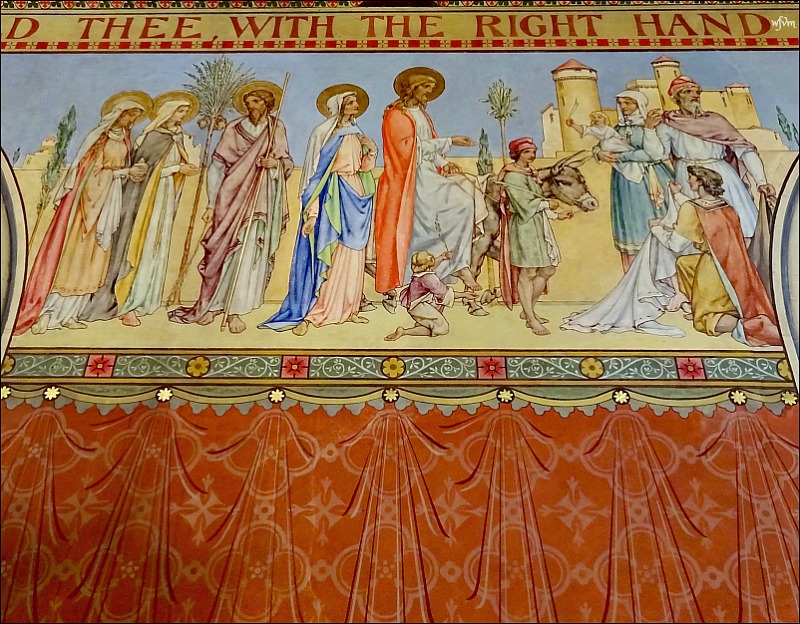 The whole of the South wall depicts the Palm Sunday procession into Jerusalem - this is just a small section.
Dominating the church on the Chancel arch Parry has painted an impressive, even stately Last Judgment. For a Doom Wall it is benign and sympathetic, especially when compared to medieval church Doom Walls, and Last Judgment frescoes carried out during the Italian Renaissance.
The fresco is full of symbolism and great detail. 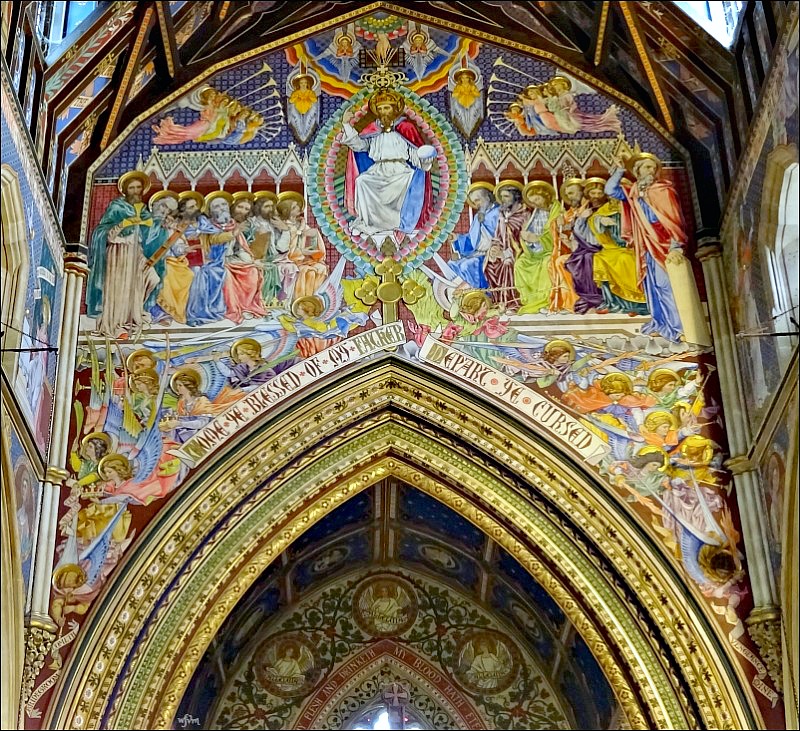 The uppermost part is occupied by the heavenly host, sounding trumpets, ushering the day of the Lord; Immediately above Christ's head is a hand holding a book, sealed 'with seven seals', and 'no man was able to open the book', but 'the Lion of the tribe of Judah' Christ, 'the King of Glory'.
In the centre 'Christ in his Majesty'. He is beckoning with his right hand gathering his saints unto him. Beneath his feet is a cross, token of his suffering whereby he was perfected.
Encircling Christ on his throne is a rainbow.
On either side sit the 12 Apostles on 12 thrones, assessors of judgment.
On the extreme right is Moses, holding a
tablet showing The Ten Commandments. His arm is obscuring the face of St. Matthew who cannot be seen, according to convention.
On the extreme left stands St. Paul, recognisable by his symbol of a sword.
The scroll around the arch to the left states "come ye blessed of my father" and to the right "depart ye cursed".The angels for the 'blessed' carry crowns and palms. To them the cry 'behold the bridegroom cometh' is the sound of joy.
On the right the angels carry flaming swords, tokens of self-chosen punishment. It is the fulfilment of his word, 'vengeance is mine'. 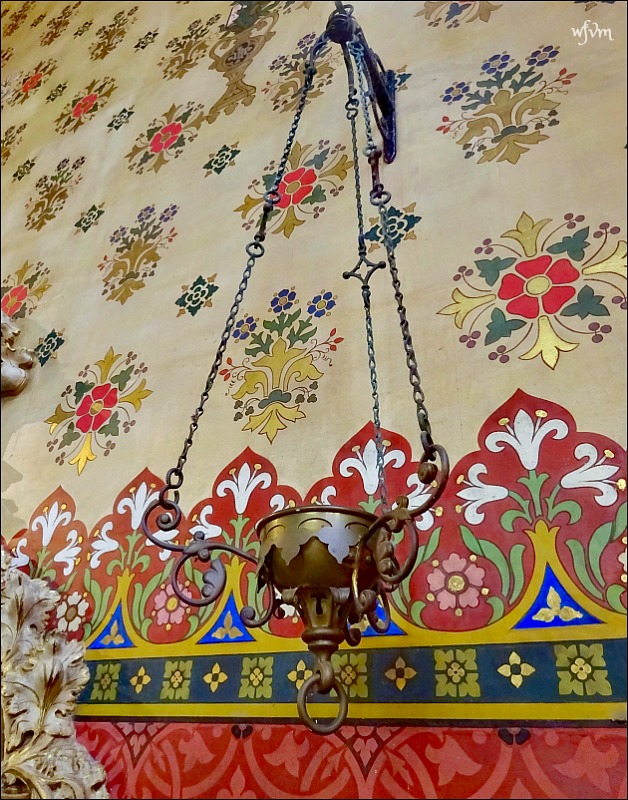 Every single wall in the church has been frescoed by Parry apart from the lettering and diaper patterns, as can be seen above. These were designed by him but painted by his Assistants. 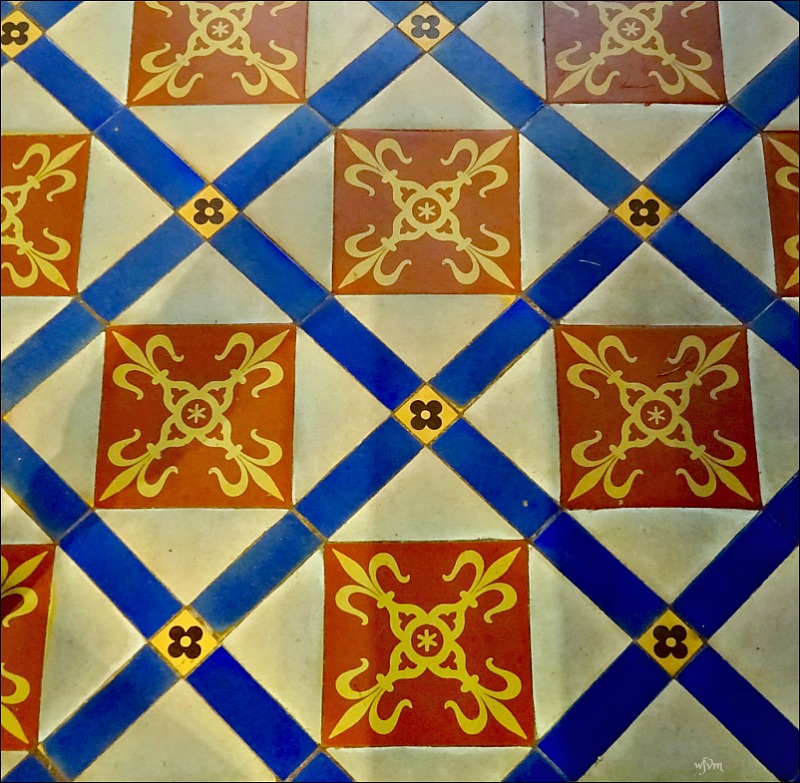 The floor tiles, made by Minton, become increasingly more ornate as you near the altar. 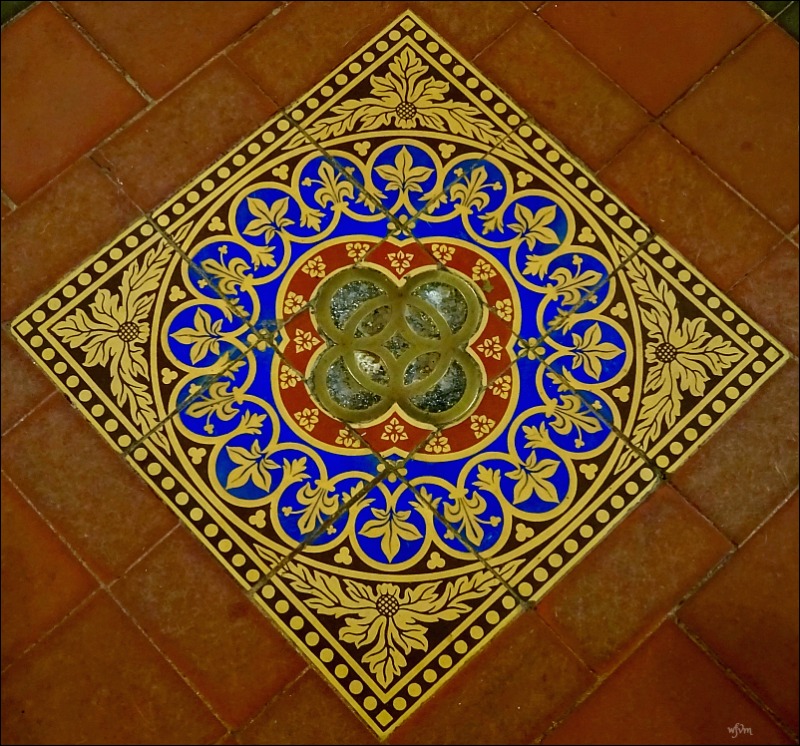 This is the organ where the young Sir Charles Hubert Parry learnt to play as a boy.
The organ was made by the Nicholson company from nearby Worcester, who today are still a thriving business. They are responsible for many fine organs found all across the British Isles and also around the world. 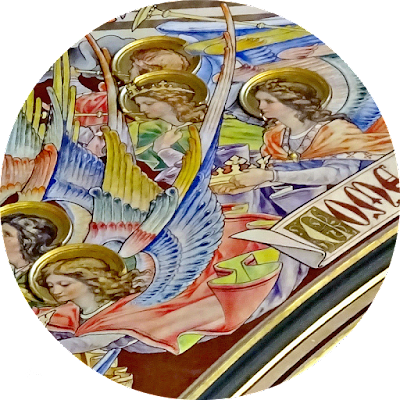