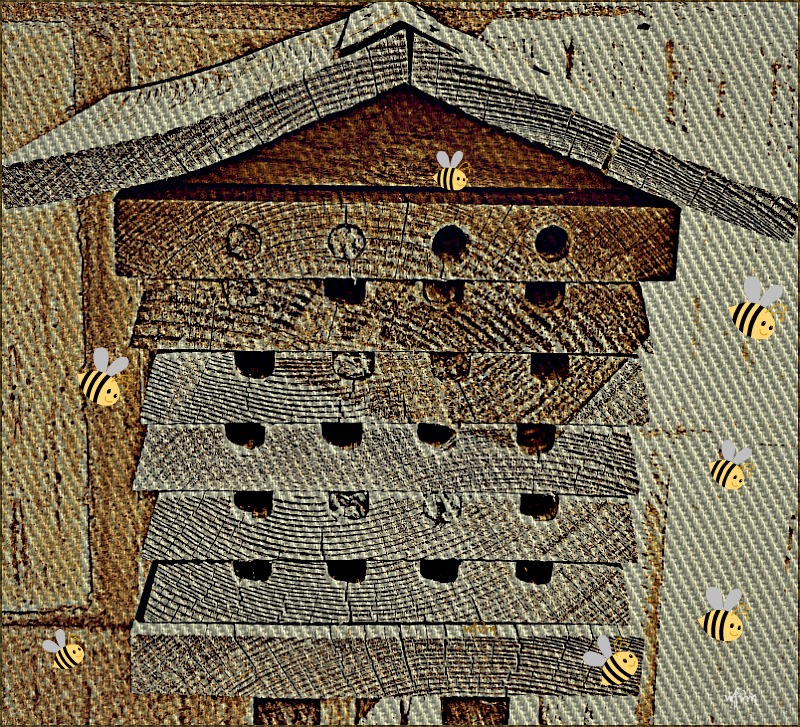 The majority of people will know that honeybees in the UK tend to live in a hive which is owned and managed by a beekeeper. Their colony consists of one Queen, hundreds of Drones, and thousands of Workers. Our fat, furry bumblebees also live in colonies which are normally located within a hole beneath the ground. However, the lifestyle of the solitary bee, that nests in my Bee Hotel has a completely different. 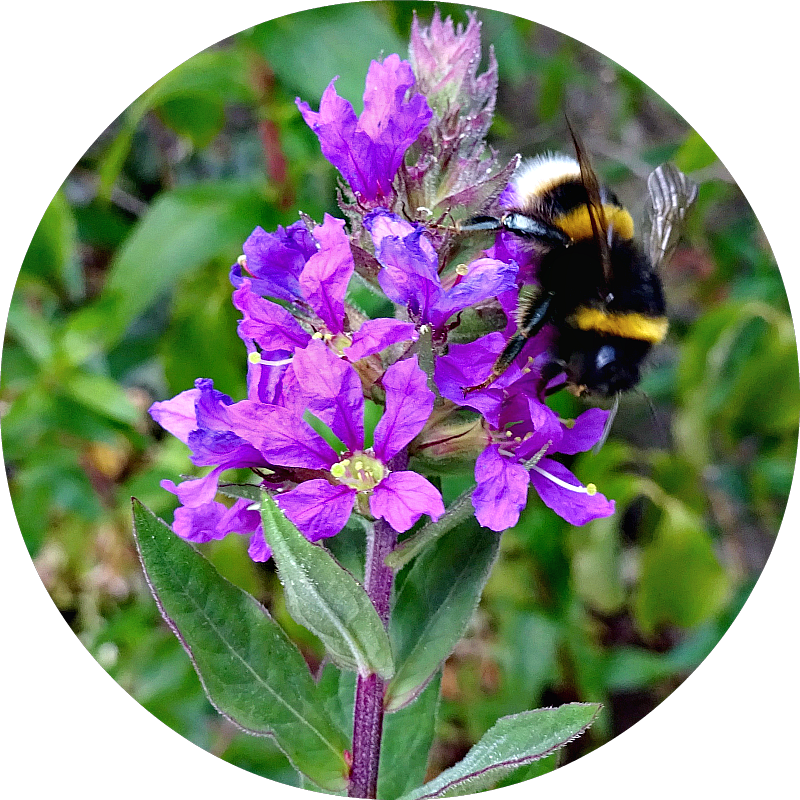 There are over 250 species of solitary bee in this country, and as the name implies, they live alone. However, the various species will happily nest alongside one another as they do in my hotel. They do not produce honey, do not have a queen but they do play a vital role in pollinating our crops, flowers, and trees. It is known that they actually pollinate plants much more efficiently than the honey bee. They are non-aggressive because they do not have any honey to protect, and in general the males do not even have a sting.
Each tunnel in my hotel holds roughly 12 - 15 eggs, which become a larvae before finally emerging as a bee during the following Spring. The solitary bee creates a ball of pollen, called a pollen loaf, at the far end of the tunnel which she moistens with nectar and then lays an egg on top of it. This will feed the larvae during the months ahead. She then builds a partition wall and repeats the process again, and again until she reaches the exit of the tunnel. This she then seals off with a saliva like substance made from mud or resin, or in the case of the leaf-cutter bee, masticated and cut leaves. Importantly the eggs nearest to the entrance are usually male enabling them to emerge first so that they are ready to mate with the female bees when they emerge from the tunnel. The male then dies within two weeks of leaving the tunnel.
I can thoroughly recommend having a solitary bee hotel. They are not expensive, and if you are handy you could construct one yourself (there are instructions on the internet). They must sit in a sunny location facing south, at least 1-1½ metres above ground, and have plenty of 'bee likeable' flowers growing nearby. Purple Loosestrife, Lavender, Buddleia, and Echinops all grow in my garden along the flight path to the hotel. It is fun to watch them coming and going whilst laying their eggs and then sealing up the exit hole. Young and old can take pleasure in watching a bee hotel, and at the end of the day you know that each year you have probably added at the very least 100 more new bees to the bee population.
During the winter months put the hotel somewhere dry and cold i.e. garage, carport. then replace it back in the spring. It is a good idea to take it apart then and give it a good clean, use a diluted solution of bleach, let it thoroughly dry, and then reassemble it. 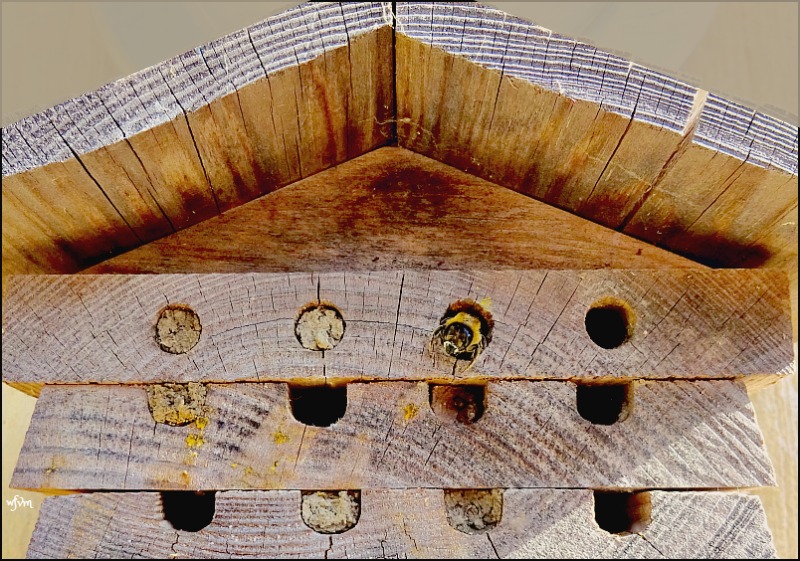 I was checking how many tunnels had been filled when suddenly this little bee popped out, which I believe to be a Red Mason bee. You can see pollen around her mouth, so I imagine that she has been making a pollen and nectar loaf. When I checked at the end of the day she had almost finished filling the tunnel and spent the night at the entrance guarding her eggs, which she then proceeded to seal during following day. There are now nine of the tunnels filled which equates to over a 100 eggs to date, and there are still about 3 laying weeks to go. 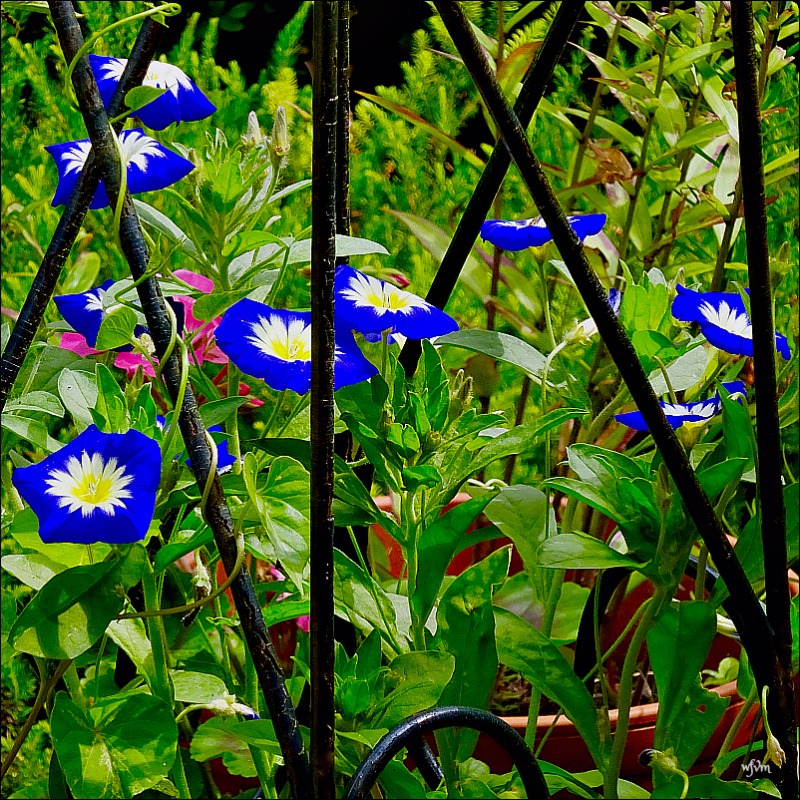 Convolvulus - blue ensign
A few weeks ago I mentioned that I had tried to grow a blue flower pyramid from seeds that I had planted. Unfortunately only the base is blue as currently the Ipomoea 'Heavenly Blue' morning glories are a bit slow climbing to the top. but I should really have placed them facing south rather than north. You can just see one of the morning glories making it's way up the frame on the left.
Posted by Rosemary at 10:03