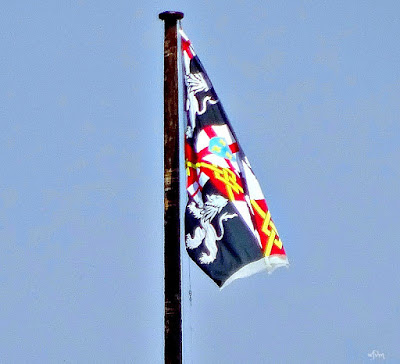 John Churchill, the 1st Duke of Marlborough, defeated the French at the Battle of Blenheim in 1704. The English name 'Blenheim' is a derivative of Blindheim, a small Bavarian village that lies on the left bank of the River Danube. The Franco/Bavarian army and the English army met on the banks of the Danube, and the ensuing battle took place in and around the village. 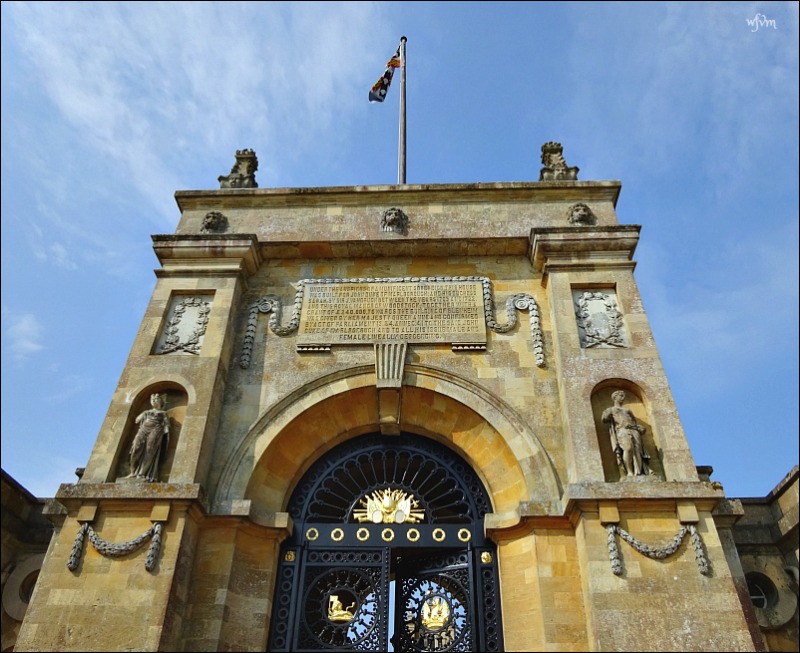 To show her gratitude, Queen Anne gave him the ruined Royal Manor of Woodstock, Oxfordshire, along with £240,000 with which to build a house to commemorate his achievements. 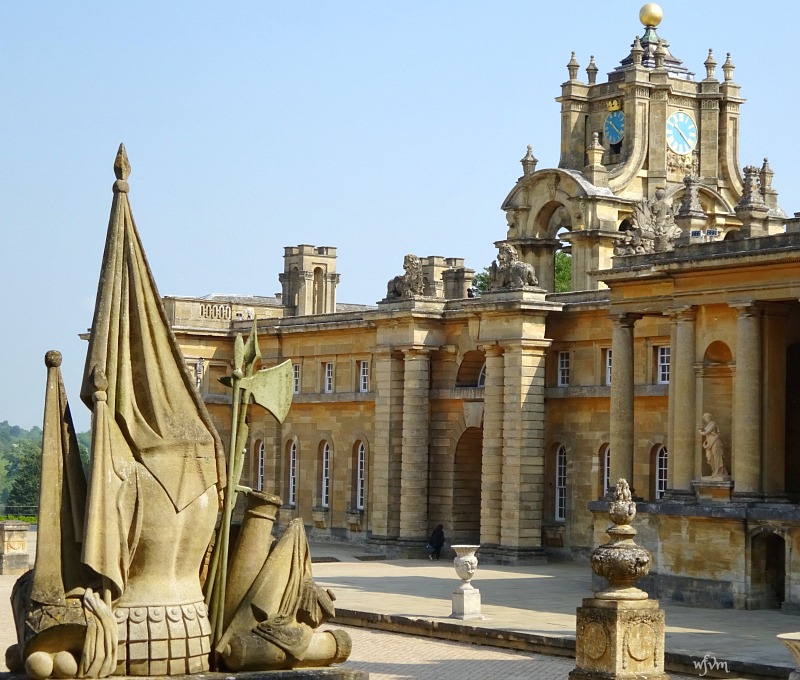 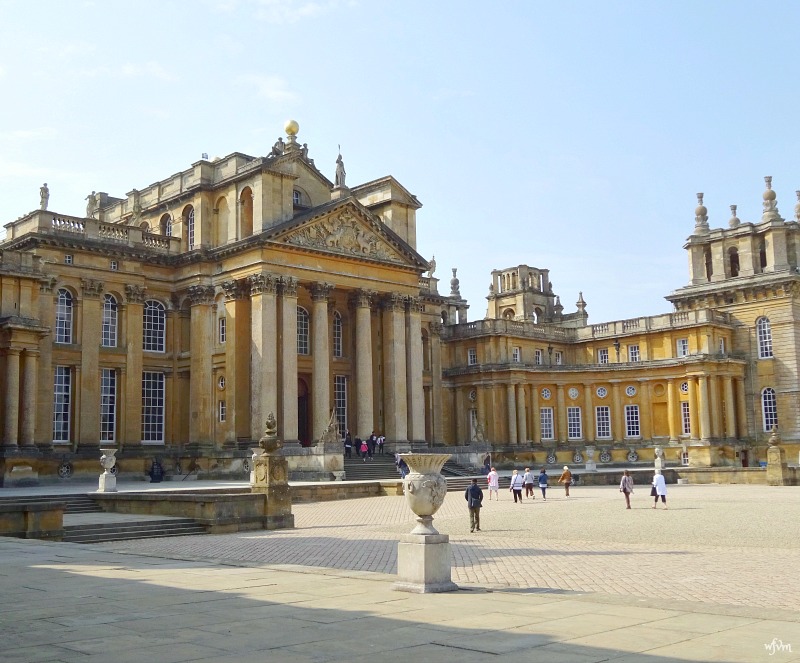 Sir John Vanbrugh, aided by Nicholas Hawksmoor,
designed and built Blenheim Palace between 1705 and 1722. It represented the beginning of a new but short lived style of architecture, known as English Baroque. 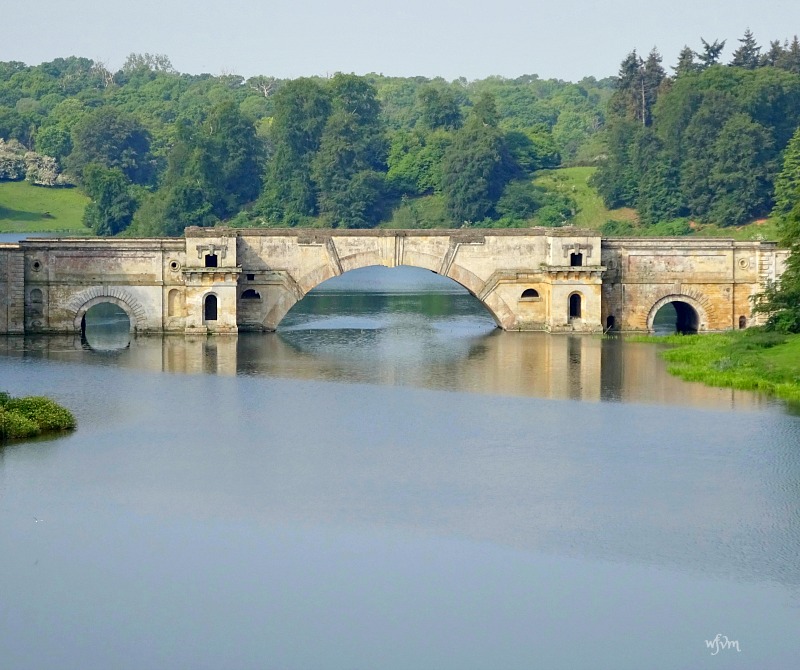 The Grand Bridge
The landscaped park designed and created by Lancelot 'Capability' Brown was considered to be 'a naturalistic Versailles'. Vanbrugh's elegant bridge spans the Great Lake and Queens Pool, and enhances Brown's surrounding landscape with a scenic driveway. 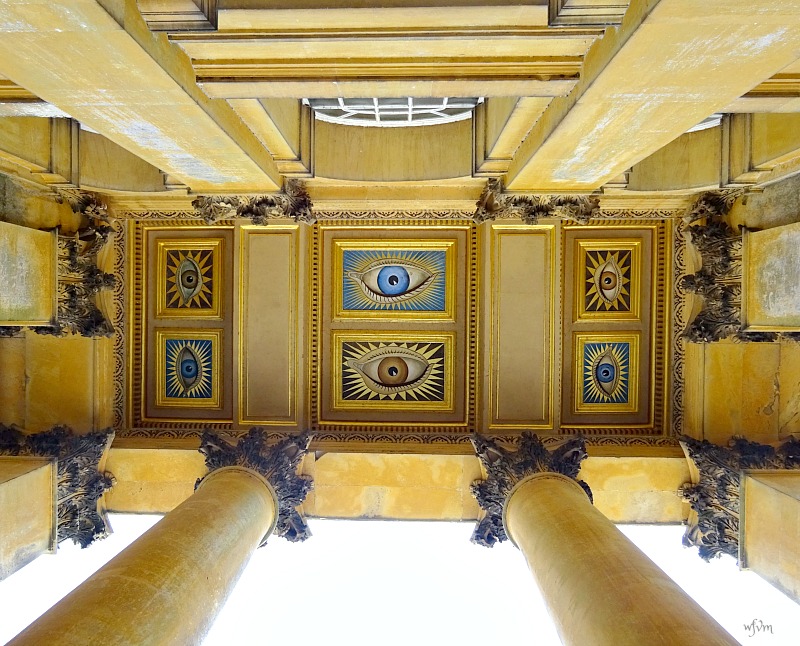 Heading inside beneath the grand entrance portico, I suddenly spotted these eyes looking down.
Painted by British artist Colin Gill in 1928 they depict the bright blue eyes of Gladys Duchess of Marlborough. Gladys was renown for her good looks and exceptional blue eyes. The brown eyes are those of her husband, the 9th Duke. 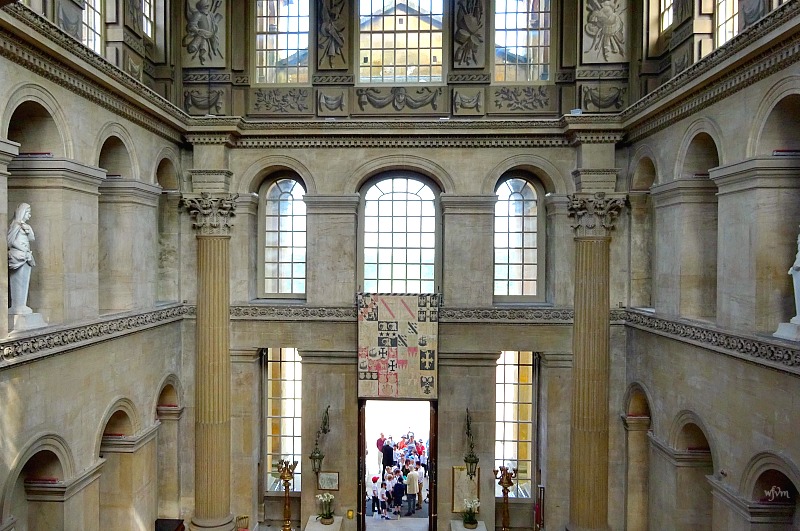 The Great Hall
The hall, which stands a remarkable 67 feet high, is made out of locally quarried Oxfordshire limestone with exquisite carvings done by Grinling Gibbons and his assistants. 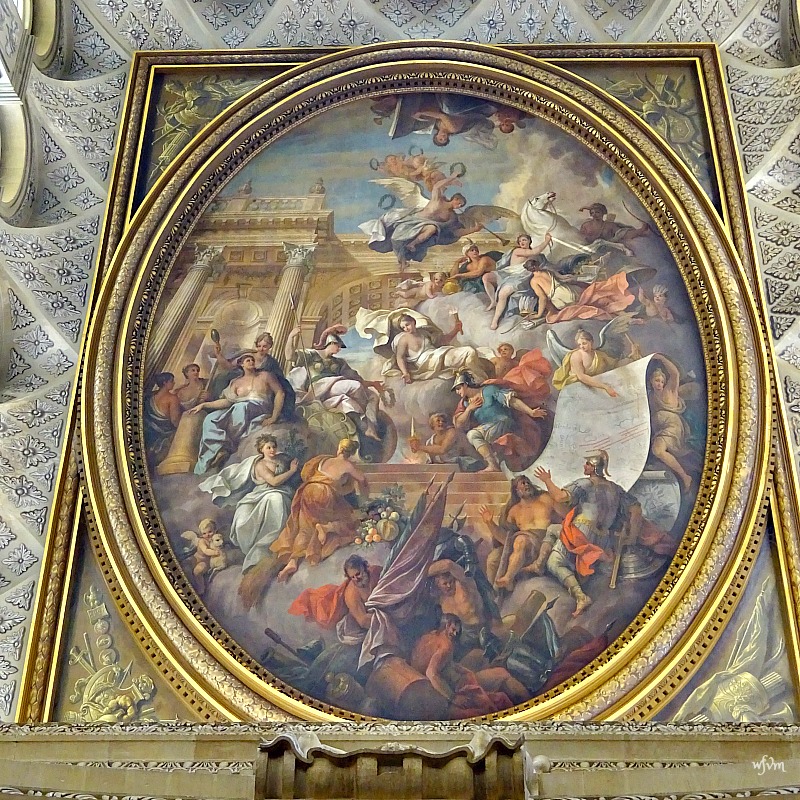 The ceiling was painted by Sir James Thornhill in 1716 and shows the 1st duke offering his battle plan to Britannia, surrounded by allegorical figures. 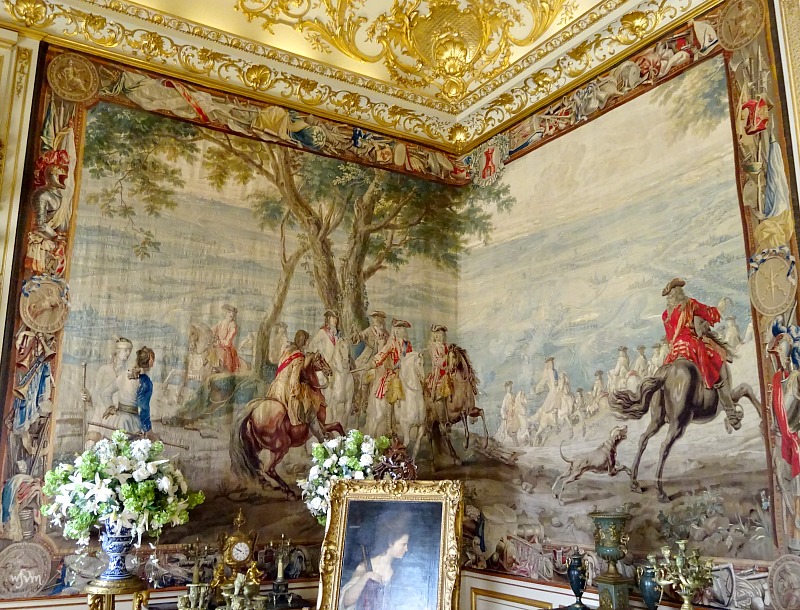 A series of nine large silk tapestries in three connecting State Rooms depicts all the victorious campaigns of the 1st Duke of Marlborough - this last tapestry shows the final French surrender to the duke (seated on the white horse) at Bouchain in France. Sir Winston Churchill, who was born at Blenheim Palace, said that the 1st Duke's battle manoeuvres shown within these nine tapestries reveal his military genius, and said that the Battle of Blenheim completely changed the 'political axis' in Europe at that time. 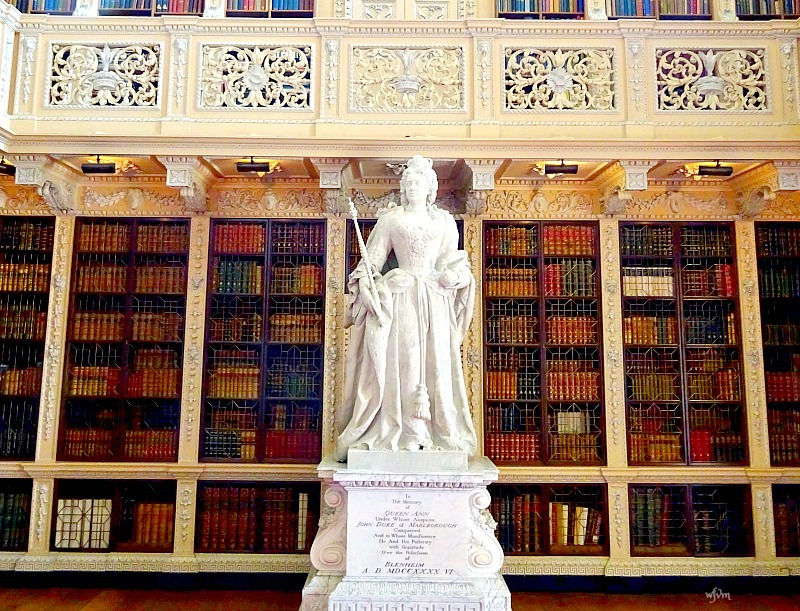 A marble statue of Queen Anne dominates the end of the library. 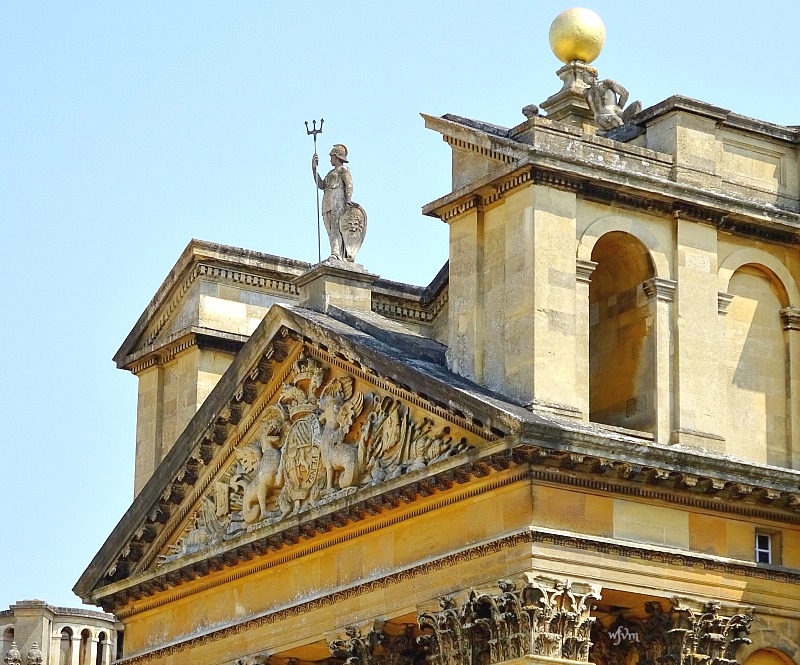 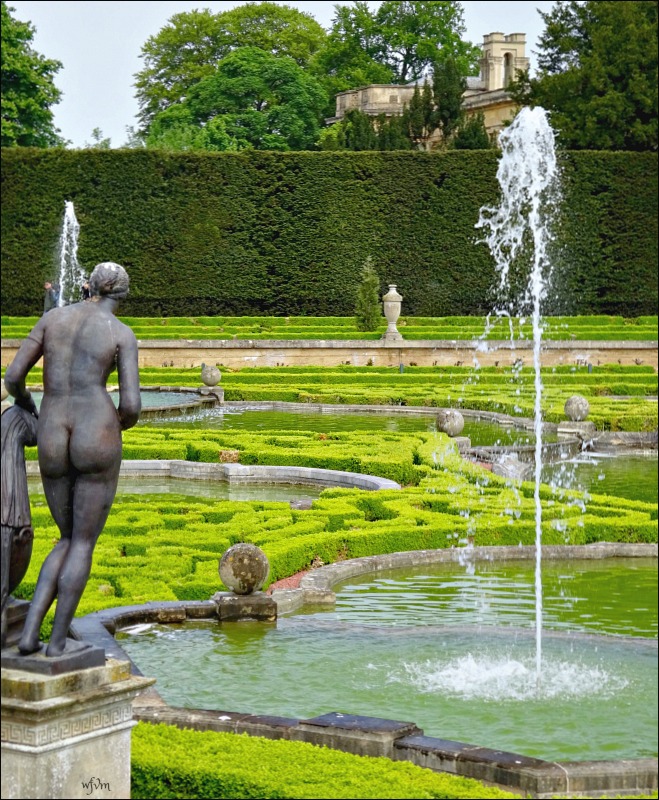 To the rear of the house is a water garden laid out in the 1920s by French architect Achille Duchêne in a c17th Italianate style with detailed parterres and fountains. 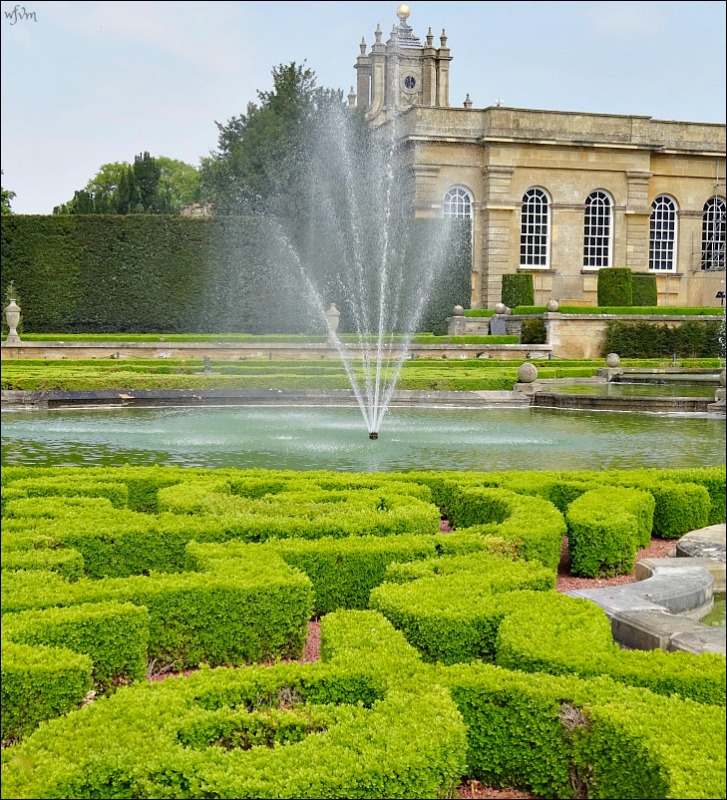 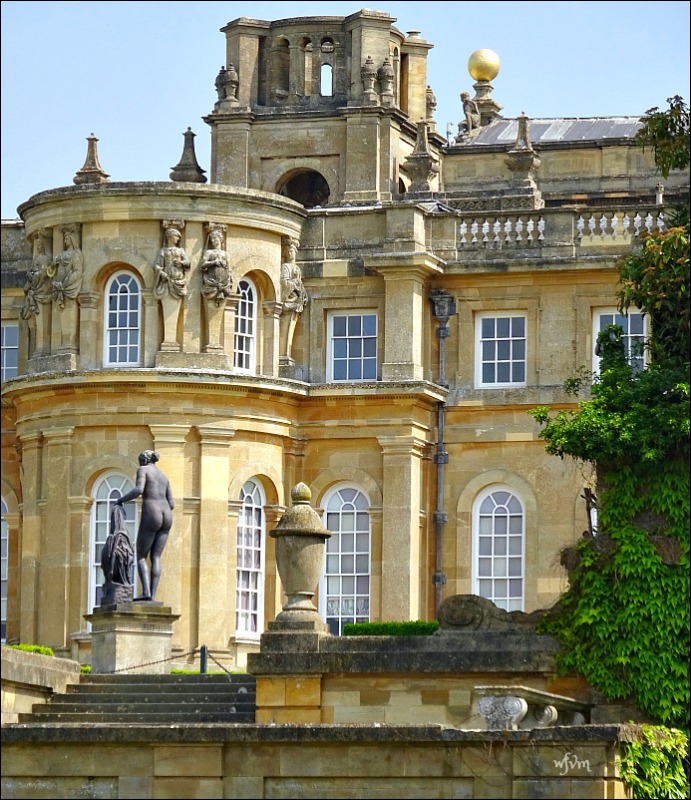 Steps lead down from the water garden to the water terrace where various paths then meander off through Brown's landscape and around the side of his great lake. 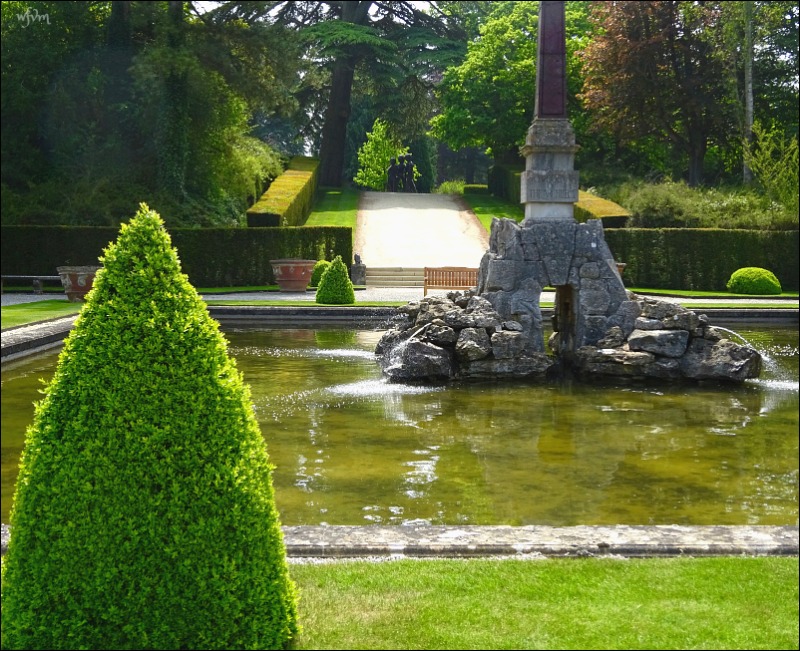 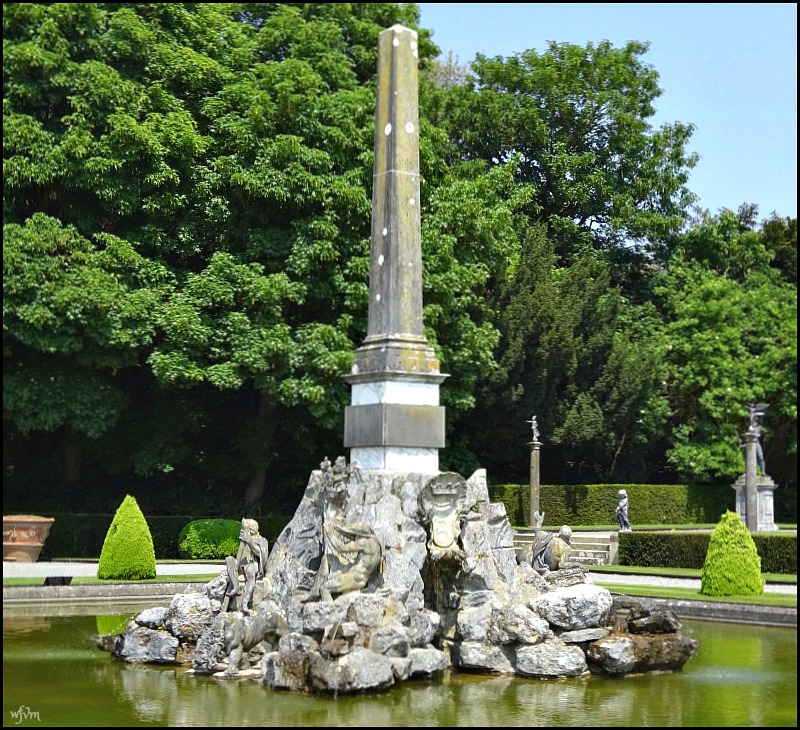 This obelisk fountain was carved in Gian Lorenzo Bernini's studio and was gifted to the 1st Duke in 1710 by the Spanish Ambassador to the Papal Court in Rome. It is a one-third scale marble copy of Bernini's Fountain in the Piazza Navona, Rome. It depicts the four great rivers of the world at that time - the Nile, the Plata, the Ganges, and the Danube, each one being represented by a symbolic figure sitting on rocks beneath the obelisk. 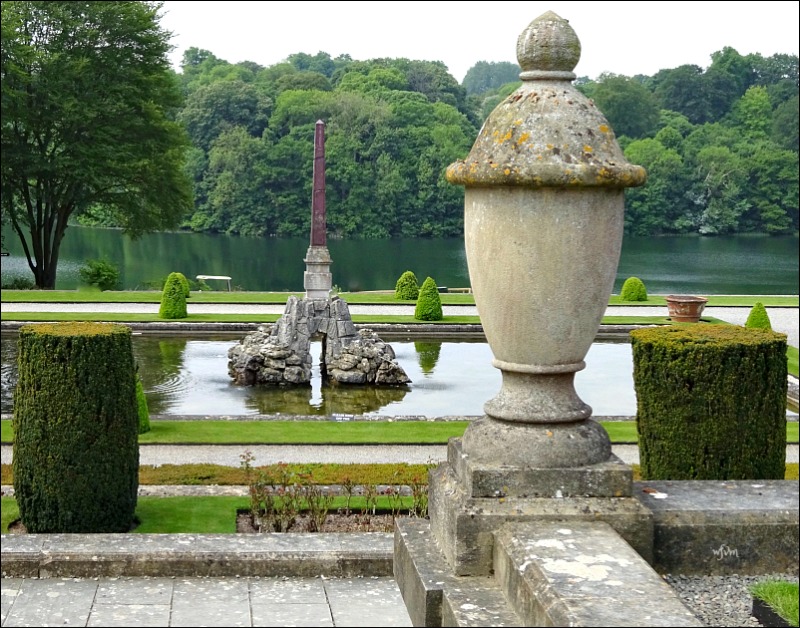 The obelisk at the other end of the water terrace was created to bring symmetry to the one created by Bernini. 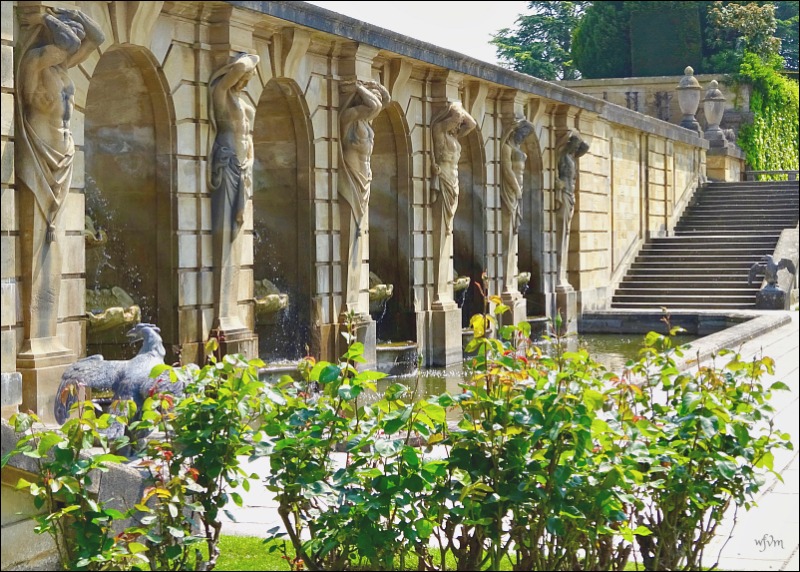 This wall of caryatids linking the terraces was carved on site by French sculptor Jules Visseaux. The head and torso of the male caryatids was modelled on one of the palace's gardeners, who happened to walk by one day as Visseaux was working. 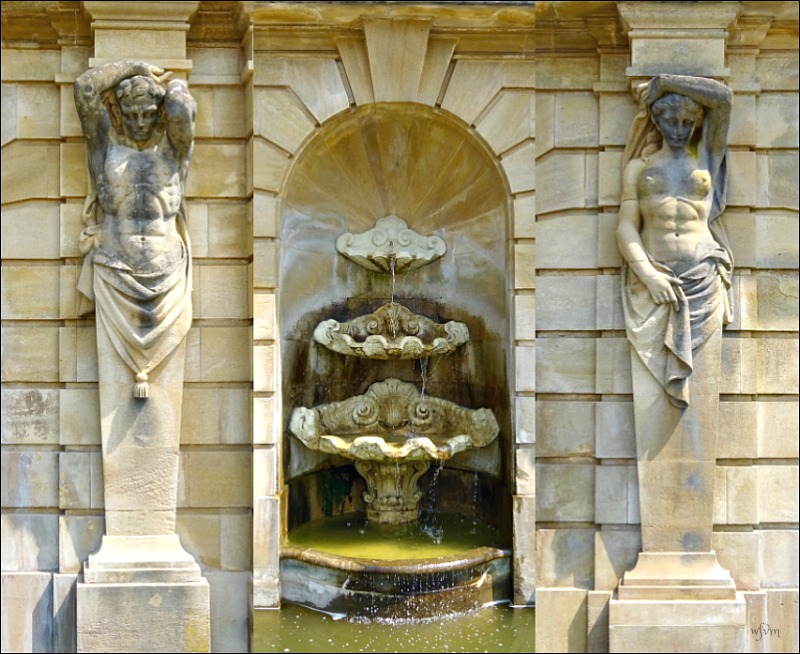 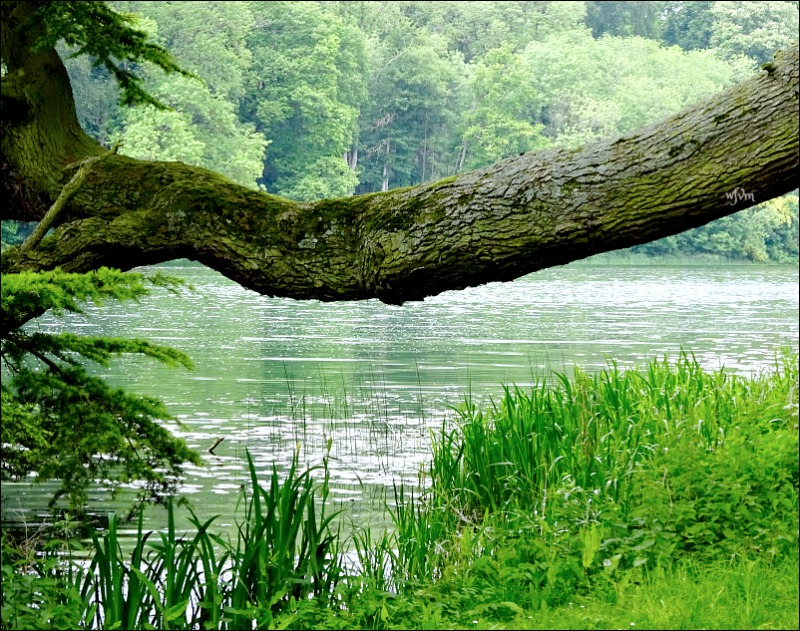 Walking around the lake reveals just how green our landscape was during last May. 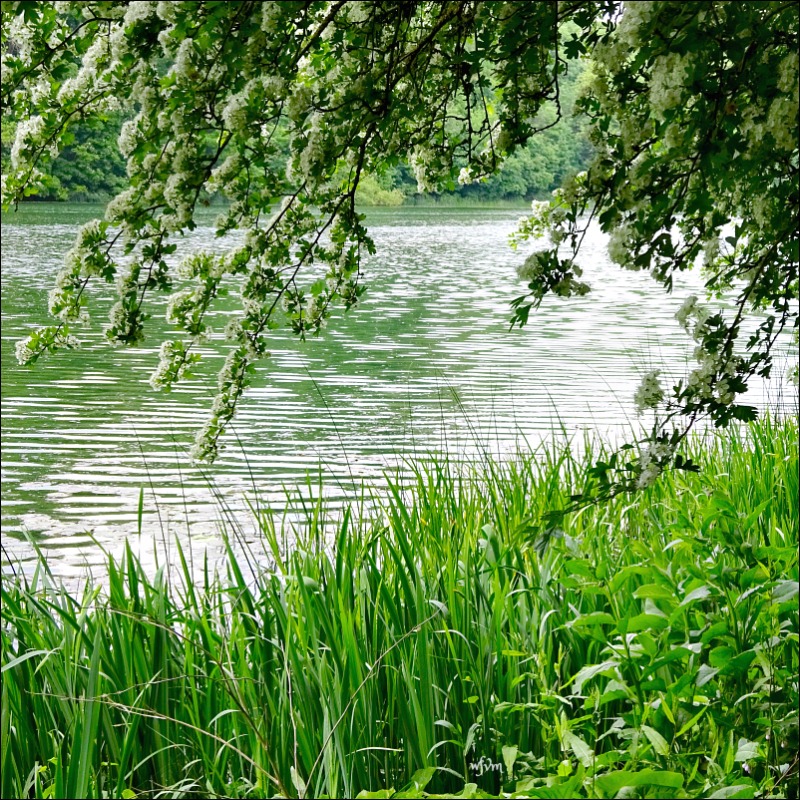 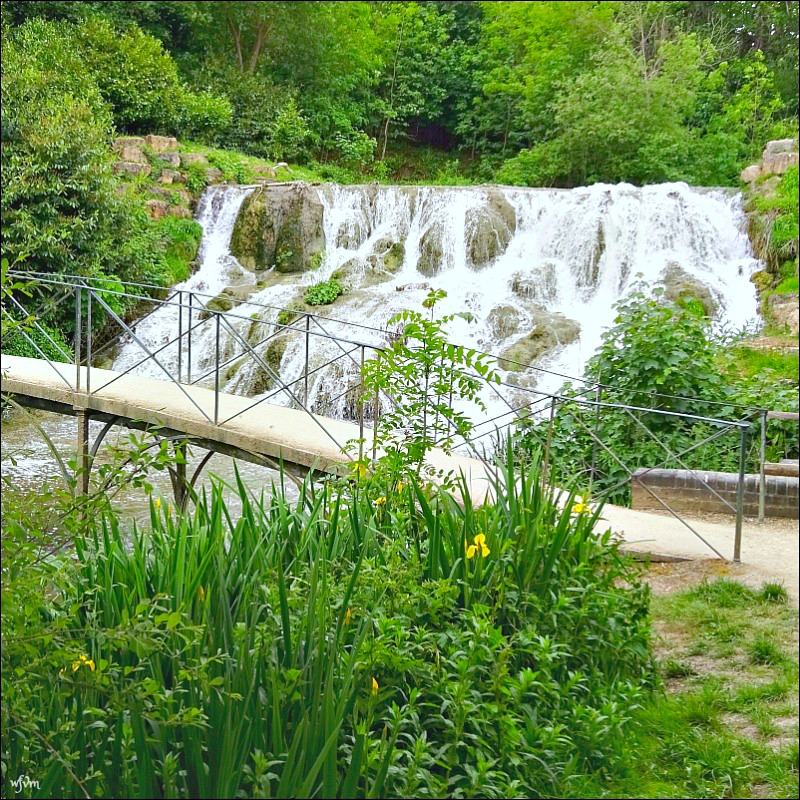 Our final destination was a lovely walk through Brown's landscape and along the side of his lake to the Cascade. It was originally built as the overflow when Brown dammed the valley to create the Great Lake, and Queens Pool. 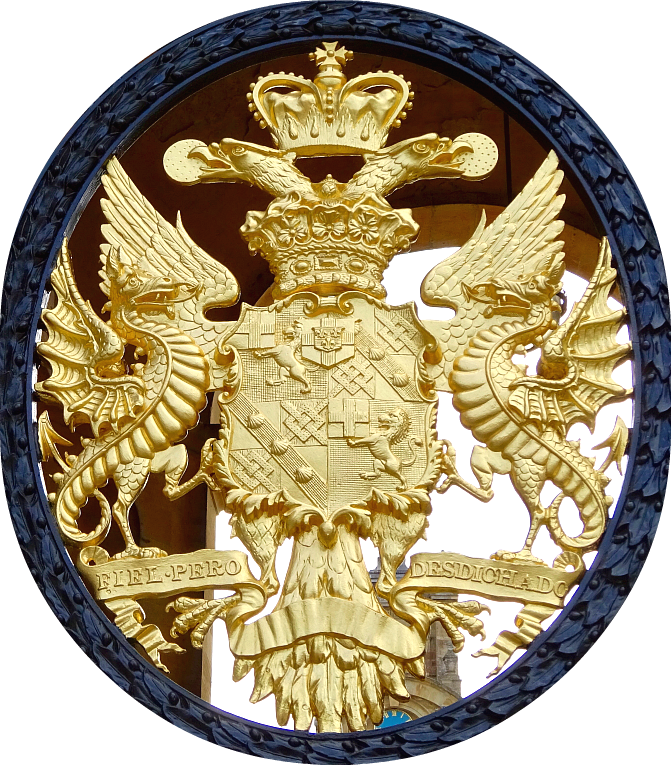 Blenheim became a World Heritage Site in 1987, in recognition of the quality of the architecture by Vanbrugh and Hawksmoor and Brown's landscaping. The house and the 2,000 acres of parkland and gardens are all Grade l listed.
Posted by Rosemary at 09:21