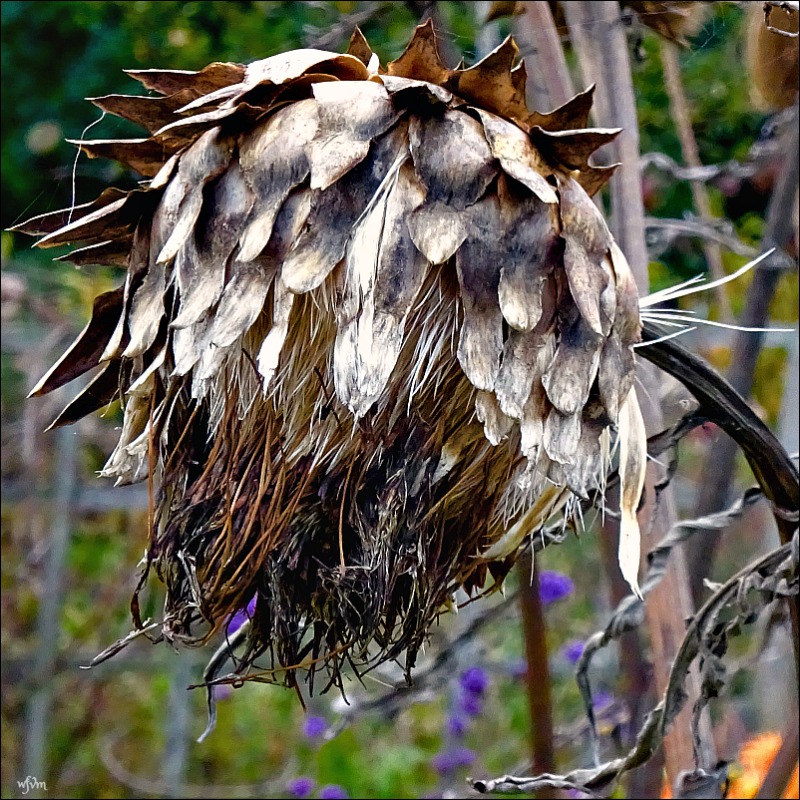 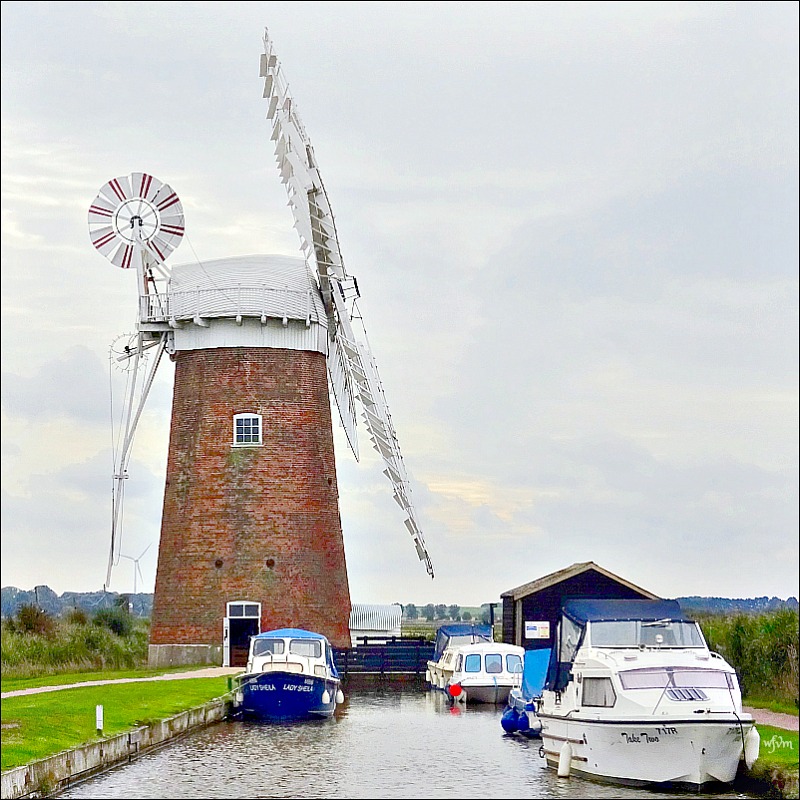 Horsey Windpump stands proudly within it's broadland water landscape, fully restored and complete with a new white cap and sails. 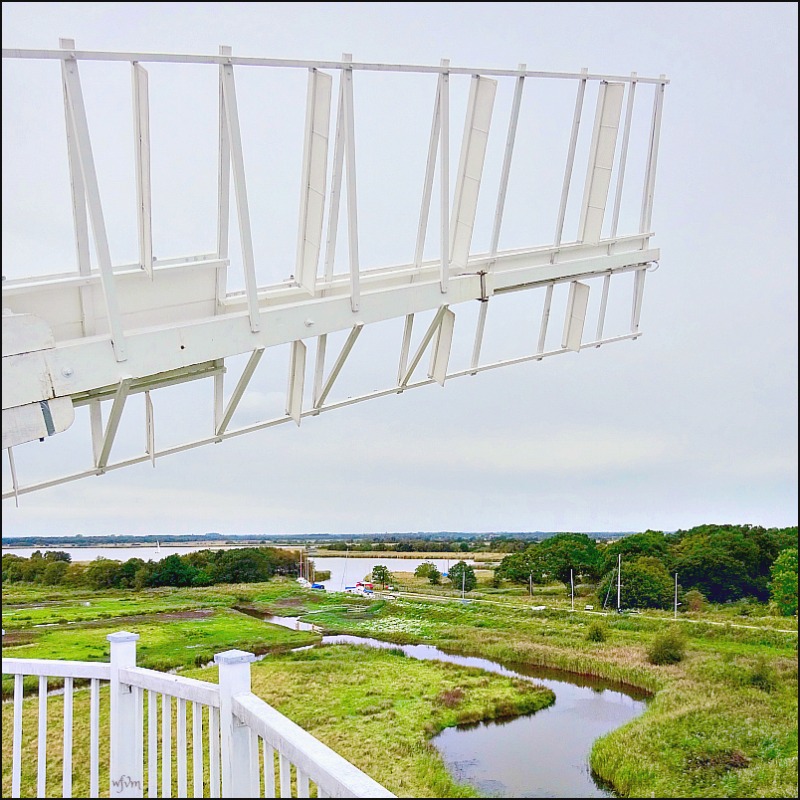 It's purpose was to pump water from the dykes, which intersect and drain the land, into the higher level system of the broads and tidal waterways. 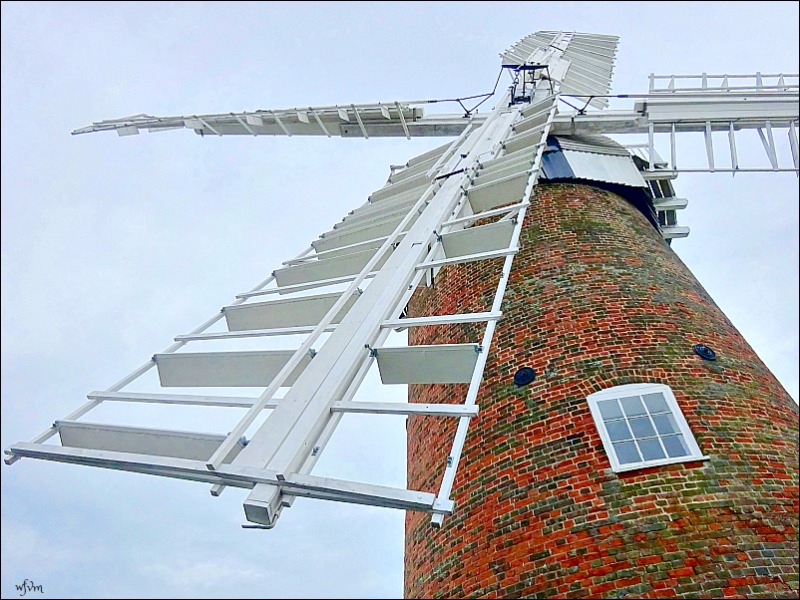 Over 200 years ago Horsey was a very different place to the one seen today. It was effectively still an island surrounded by marshes with just one road in and out, and a small village that was often flooded for most of the year. 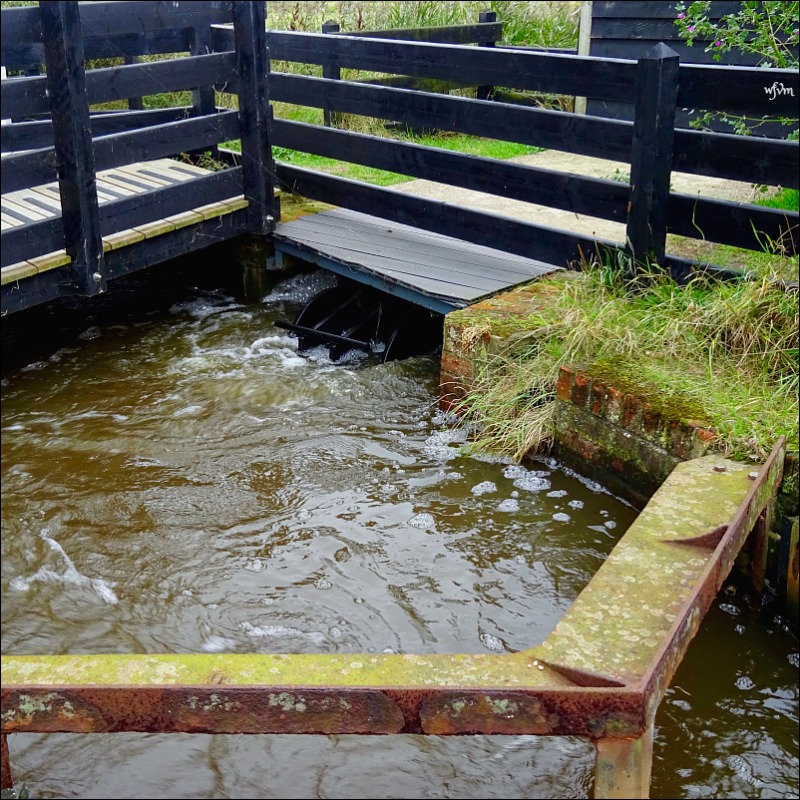 The vicar of the village reported that he nearly drowned on three occasions whilst travelling to church to give his sermon!
The name Horsey means 'Horse Island" and it is believed that Horsey was originally a stud or grazing area for horses. Mortality was high with insects carrying Fen Plague, also known as Marsh Malaria, and with only seven cottages and a small farm house, Horsey was not somewhere people wanted to live. 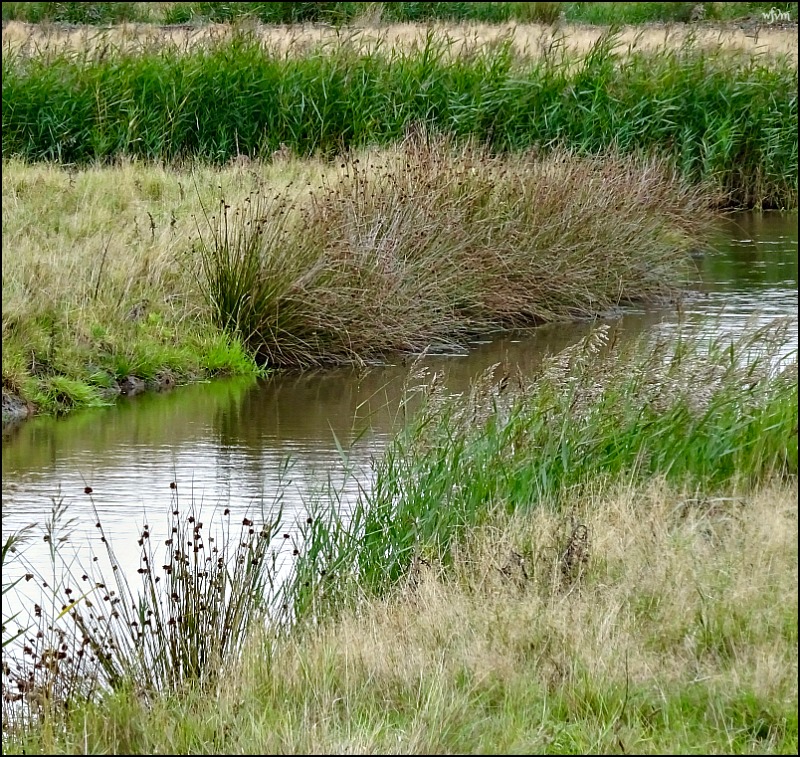 Horsey today has significantly changed having grown in size and become a tourist destination. It's Broadland landscape is known for the wildlife that inhabits this corner of Norfolk including Marsh Harriers, Swallowtail butterflies, Bitterns, and Kingfishers.
With the land drained and a proper access road built, many visitors flock to the area each year. The Norfolk Broads are now an attractive destination, a far cry from 200 years ago. 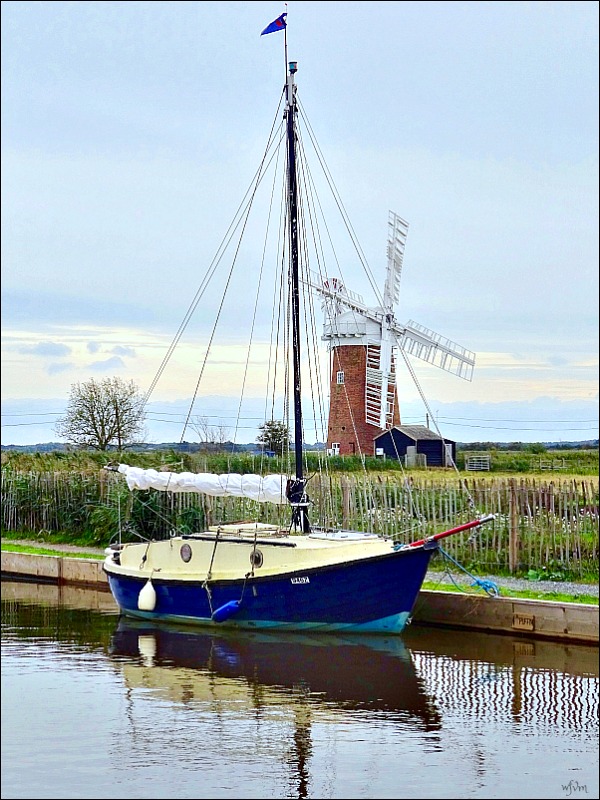 ❈ ❈ ❈ ❈ ❈ ❈
Most English churches have square towers, but there are a number of round ones, which are to be found mainly in the counties of Norfolk, Suffolk, and Cambridge. Many of these round towers date back to the Anglo-Saxon period, two hundred years before the Norman invasion in 1066.
The question is - why are they round?
It is thought that the main reason was the lack of a suitable local building material. Square towers require strong stone which is cut and dressed into blocks at each of the corners. There is an absence of stone to be found in East Anglia and to transport stone from another area of the country would have been too expensive especially for small country parishes. The only local stone was flint which is a small, knobbly stone, and although it creates strong walls when set in mortar, it is not suitable for tower corners. Hence they built round towers. Flints were easily found in the soil following ploughing the fields, or pits were dug to extract them. Churches near the sea were built from round flints found on the beaches. Towards the end of the round tower building period some flints were 'knapped' meaning that the flints were cut in two so that their interior glass like face would look more attractive when it was set into the wall. Thatched roofs are also a common church roof feature in East Anglia. They are normally thatched using the local Norfolk reeds which remain good for at least 60 years. 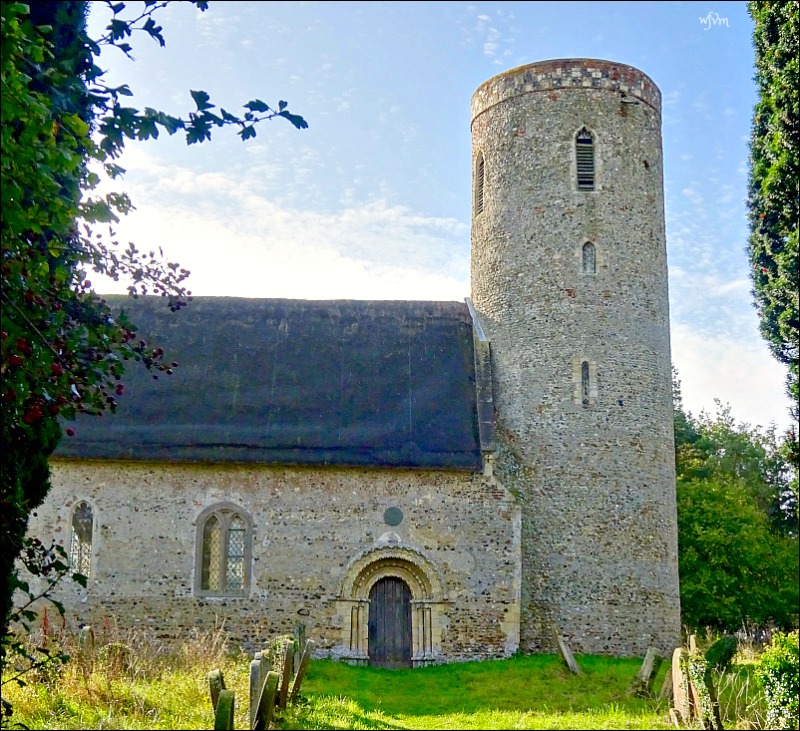 St. Margaret's in Hales, Norfolk with its round tower and thatched roof feels like a step back in time. Standing in an isolated setting, within an overgrown graveyard meadow, it's as if this church is still rooted in the Norman world.
St. Margaret's is a redundant church now in the care of The Churches Conservation Trust who protect historic churches. 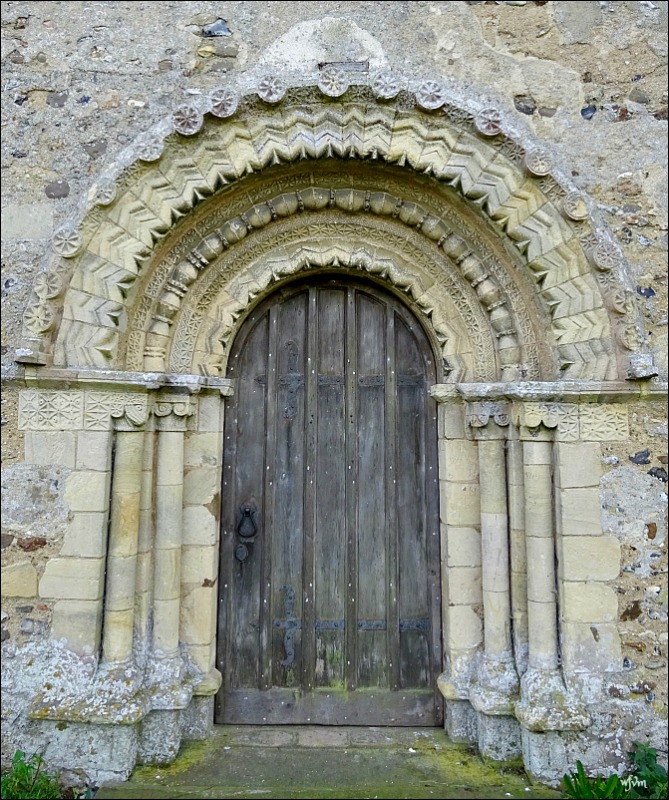 A lovely Norman entrance with a feast of ziz-zag mouldings combined with star shapes, wheel patterns, and a ram's head topping one of the capitals. 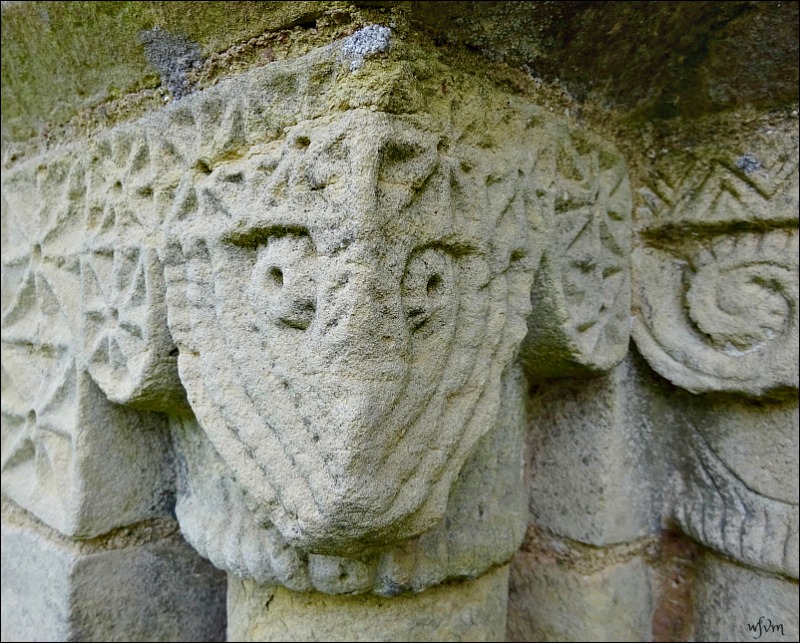 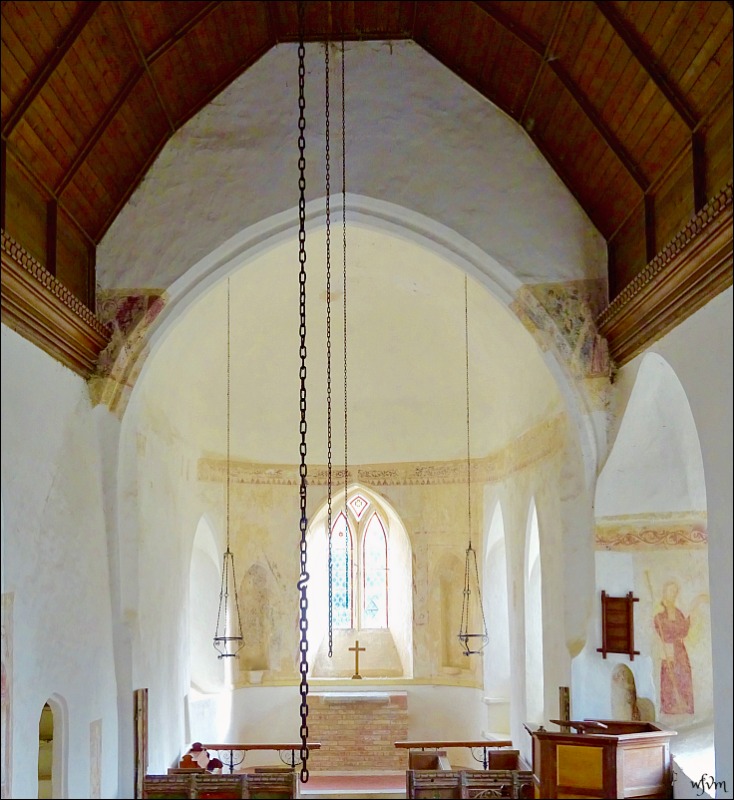 The interior of the church is simple and rustic with a Norman apse, making it the most intact pre-Gothic church to be found in Norfolk. 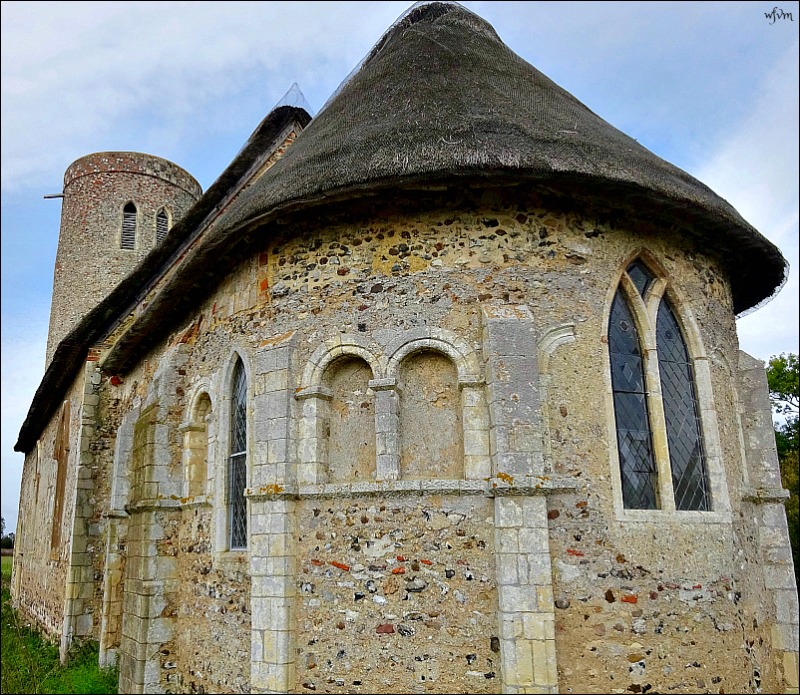 The apse from outside
Faded medieval faces painted on the walls peer out as they have done for hundreds of years creating it's unique aura of antiquity and tranquility. 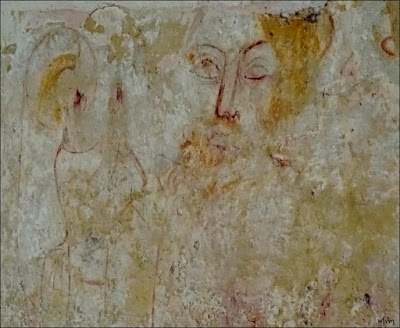 A much diminished image of St.Christopher carrying Christ. 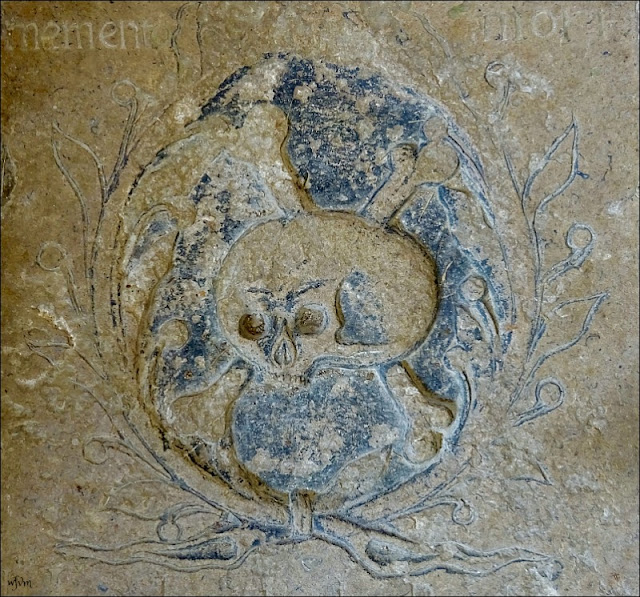 A skull and cross bone, memento mori, set into the floor - a symbolic reminder of the inevitability of death. 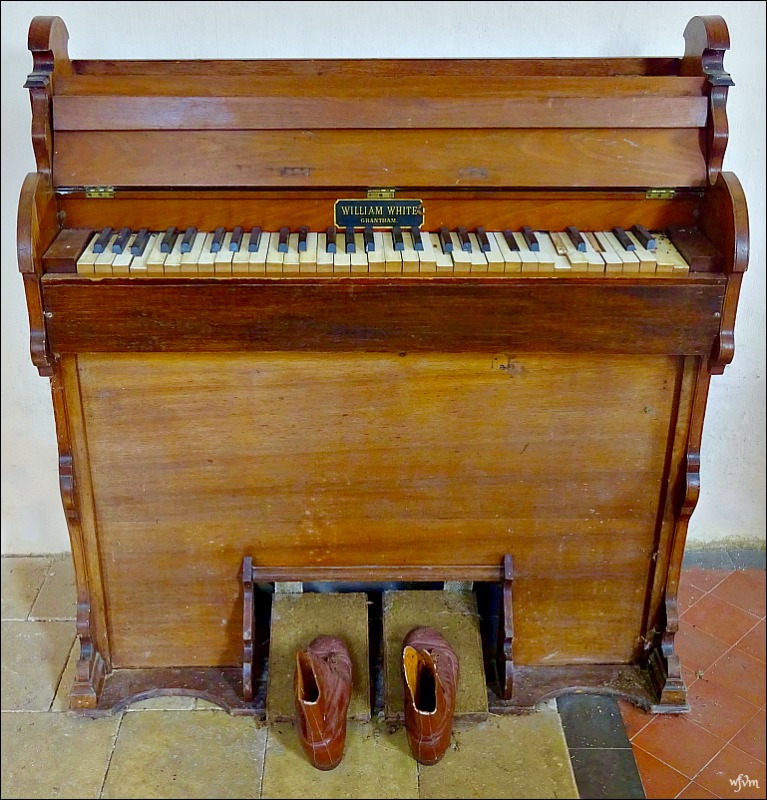 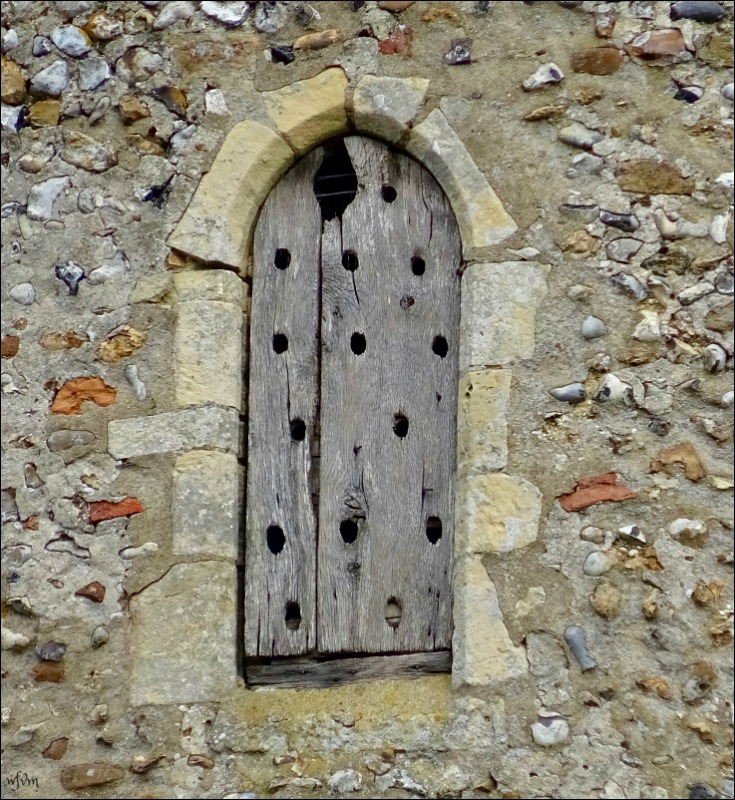 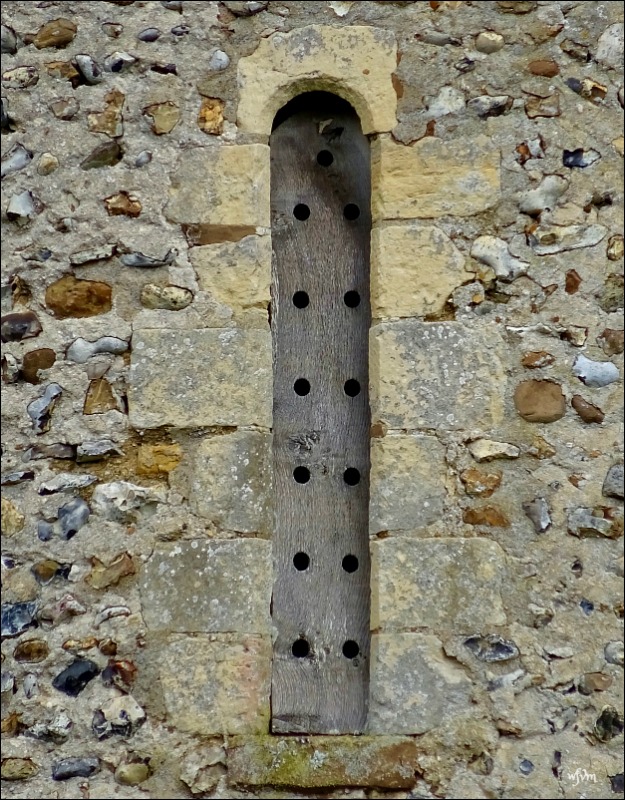 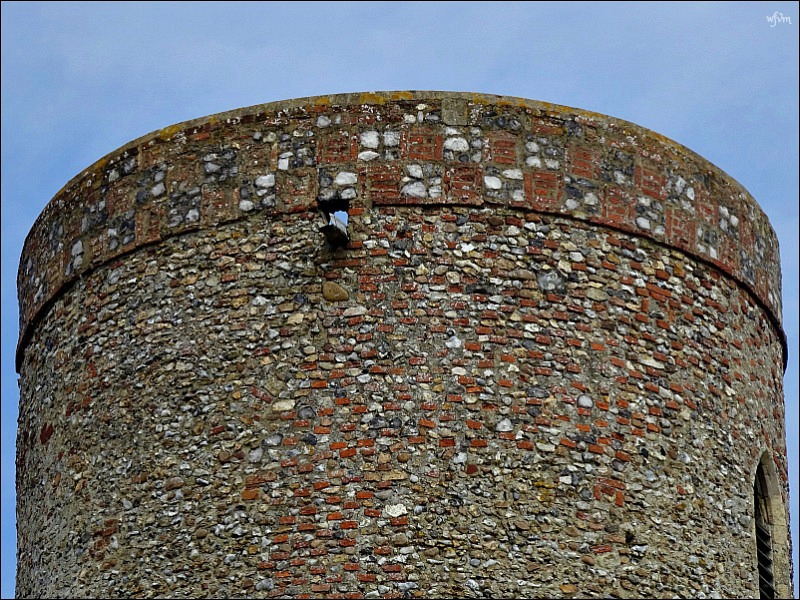 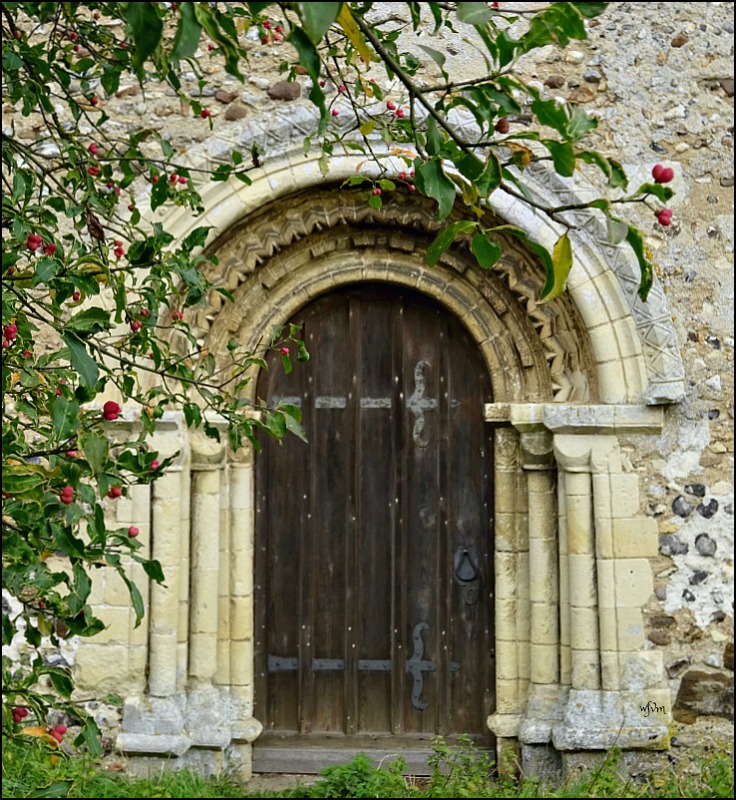