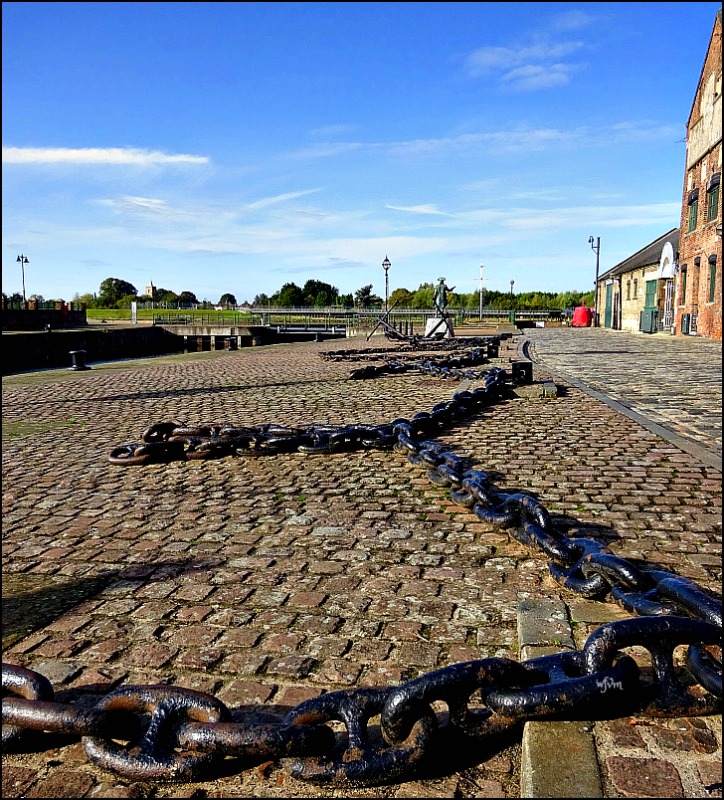 has a long seafaring history stretching back to the 12th century. It was one of England's most important ports, and it's illustrious maritime past is still much in evidence today. It has many fine old merchants' houses, an elegant Custom House overlooking the original medieval harbour, and some of the finest civic buildings covering several centuries. 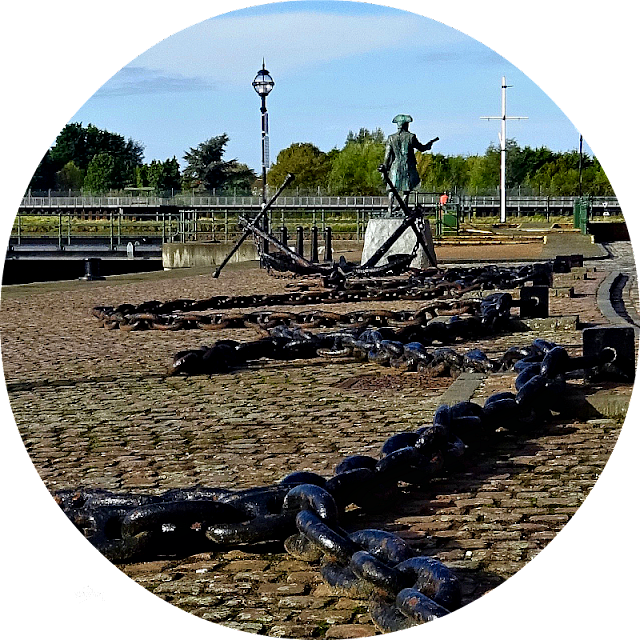 But who is that seen gazing out across the harbour? 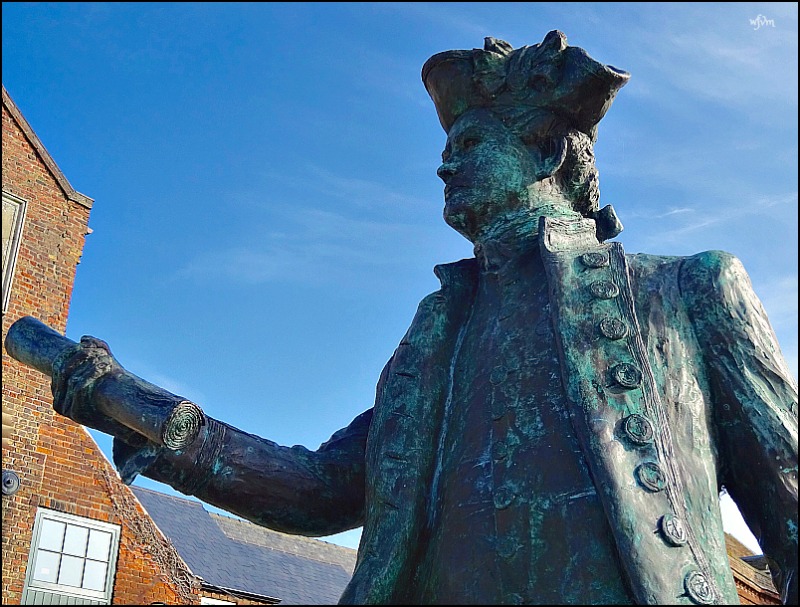 Explorer/navigator Captain George Vancouver, was born 22nd June 1757 in King's Lynn. He began his naval career at the tender age of 13 as an able seaman under Capt. James Cook on his ship the Resolution. By the time of Cook's famous third voyage in HMS Discovery, Vancouver had become a midshipman. He was 32 when he attained the rank of commander and was sent to explore and survey South West Australia, New Zealand and then the West coast of America in a new HMS Discovery. He led the longest mapping expedition in history. In 4½ years, he sailed 140,000 km, and mapped the North American west coast from Mexico to southern Alaska. His measurements were so accurate that many are still used today. He proved that Vancouver Island, was truly an island, and it was named in his honour. The city of Vancouver and also Fort Vancouver in Washington state were also named after him. His life was short, he died when he was just 40 years old. 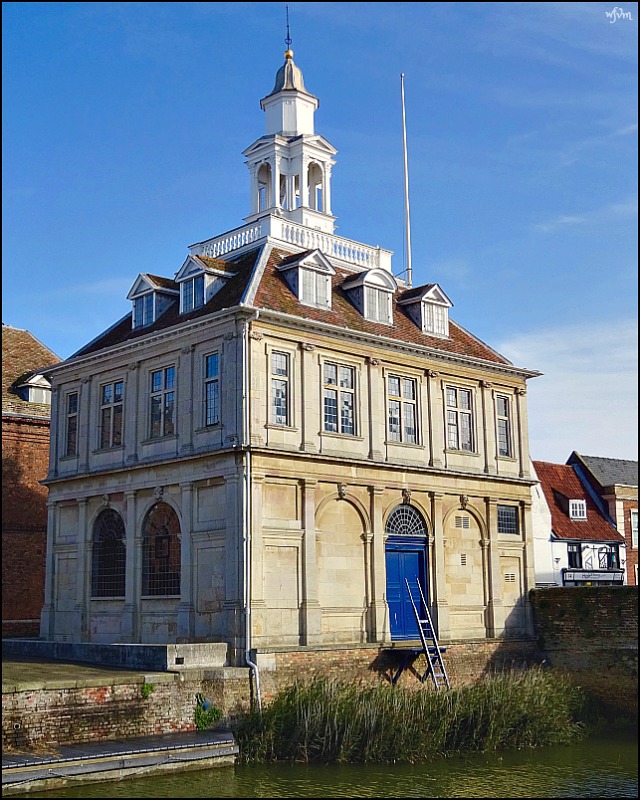 Custom House
King's Lynn sits on the extensive inland waterway system of the River Ouse. Both sides of the river have been linked together by regular daily ferry services since 1285.  Its geographical position made it an ideal place for European trade from Baltic and English coastal harbours. The town attracted traders from the Hanseatic League, a group of German cities whose ships travelled together in convoys for safety, especially against pirates. They came to Lynn with fish, furs, timber, wax and pitch and took away English wool, cloth, corn and salt. The port today is still busy exporting grain and importing timber.
The Custom House, designed by Henry Bell, was built as a merchant's exchange and as a place to regulate trade through the port. It is one of the towns most iconic buildings, and was described by architectural historian Sir Nikolaus Pevsner as 'one of the most perfect buildings ever built'. 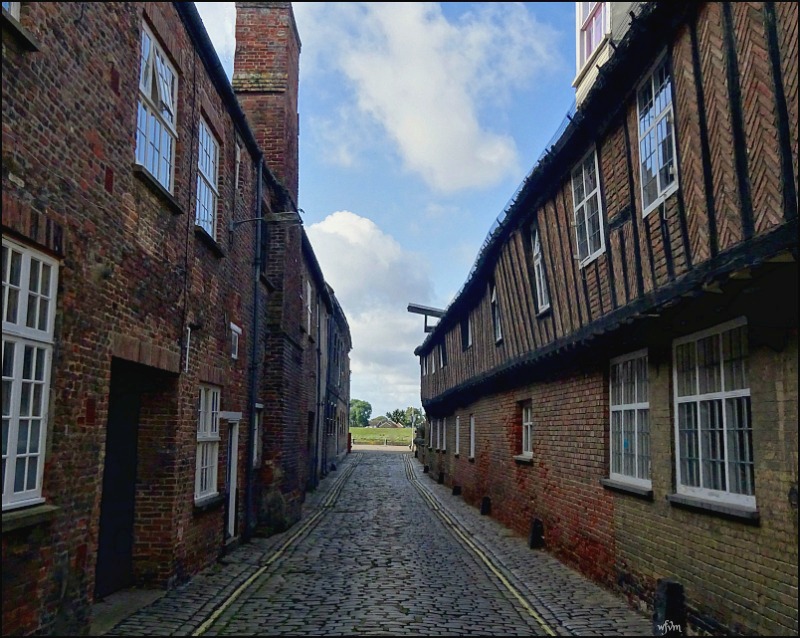 This is England's only surviving example of a Hanseatic business headquarters, dating from 1475. Built around a narrow court, these warehouses and offices were used continuously by the German cities of Lubeck, Hamburg and Bremen for almost 300 years. 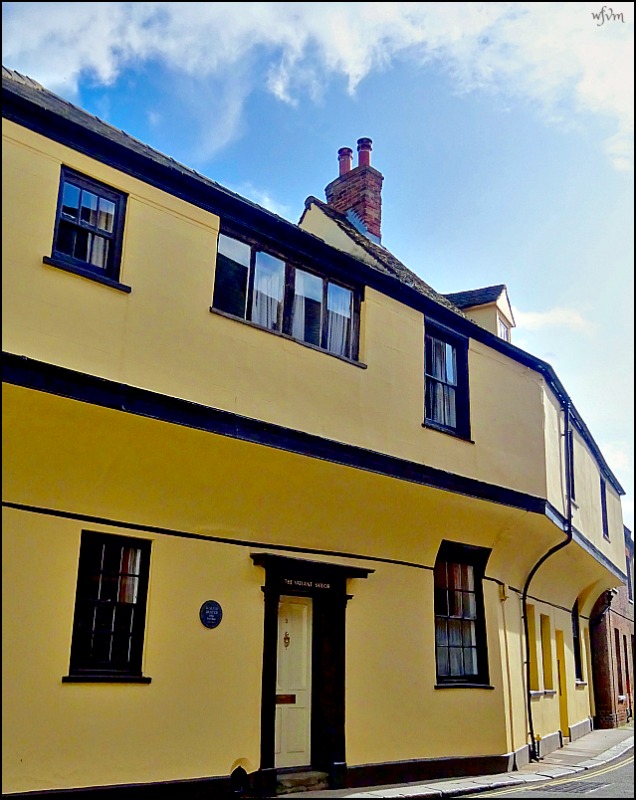 This 15th century property, thought to have been updated during the 16th century, goes by the name of the 'Valiant Sailor' reflecting the fact that it was a public house for 200 years. Since 1925 it has been a private residence. 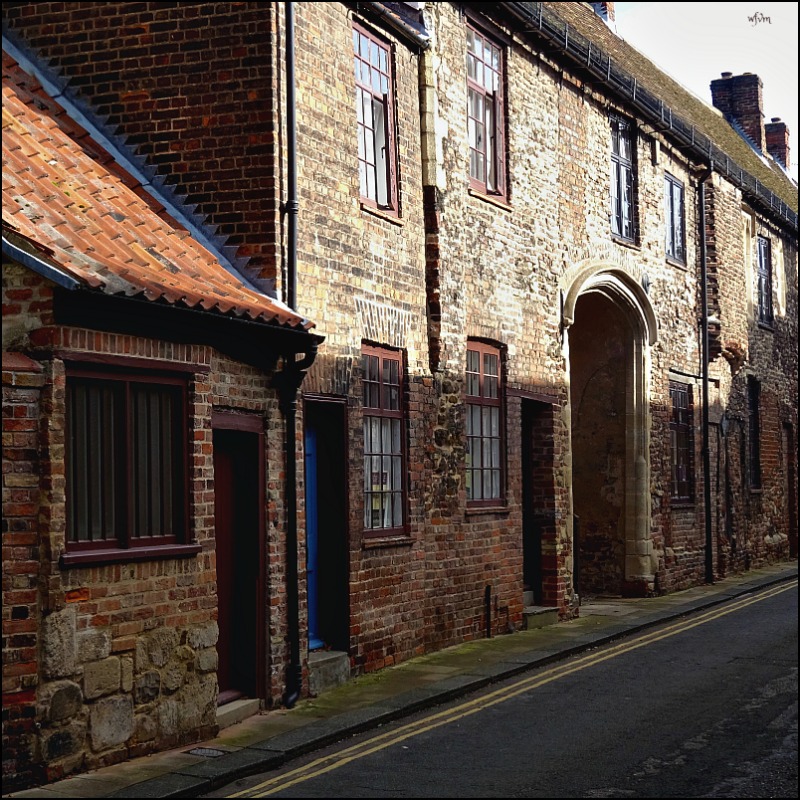 These cottages were once part of St. Margaret's Benedictine Priory founded in c.1100, 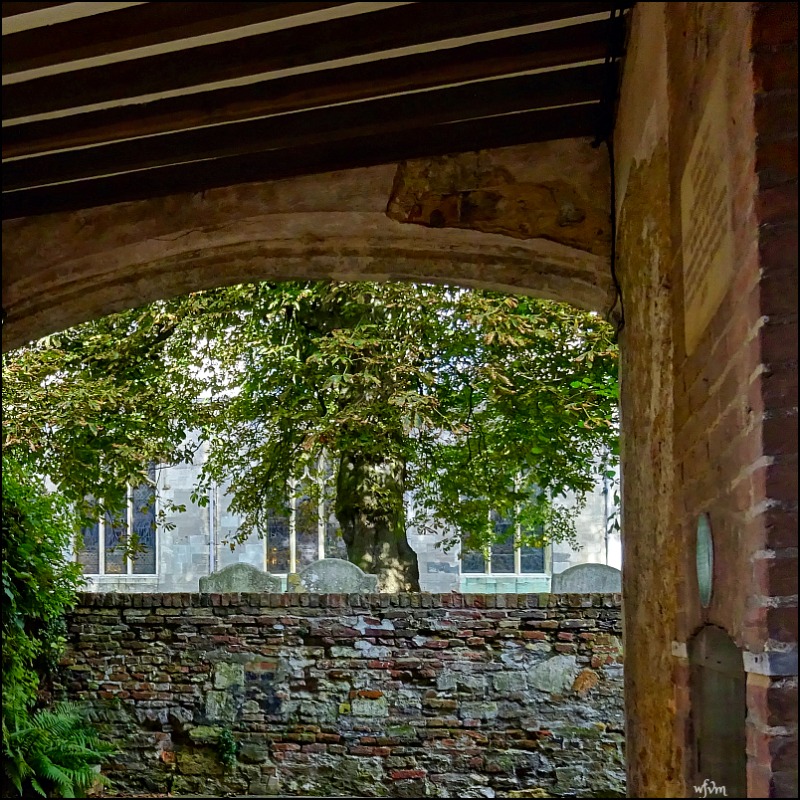 Through the old Priory archway at the rear of the cottages is the Minster and Priory Church of St. Margaret, 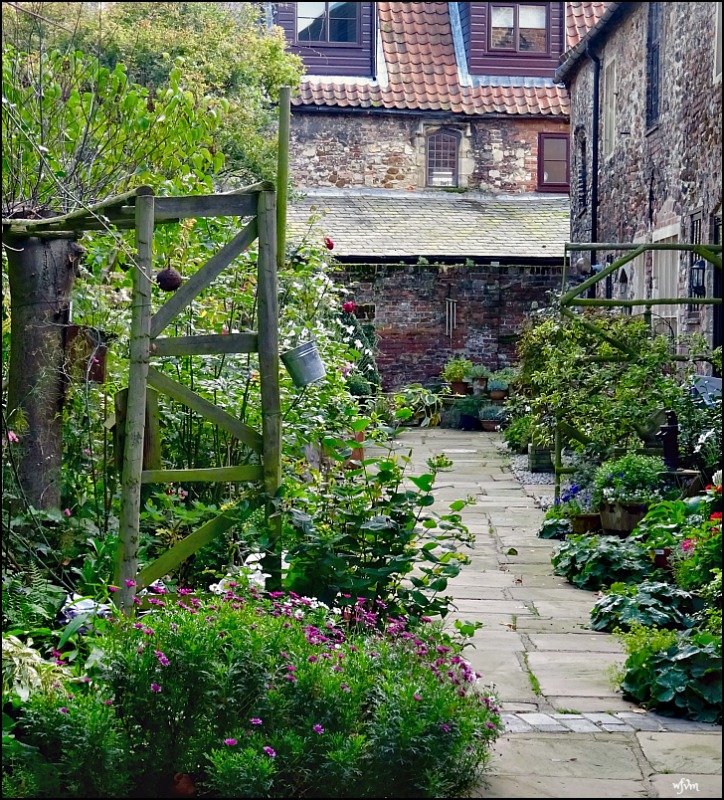 and it is where these cottages enjoy tiny, but pretty gardens. 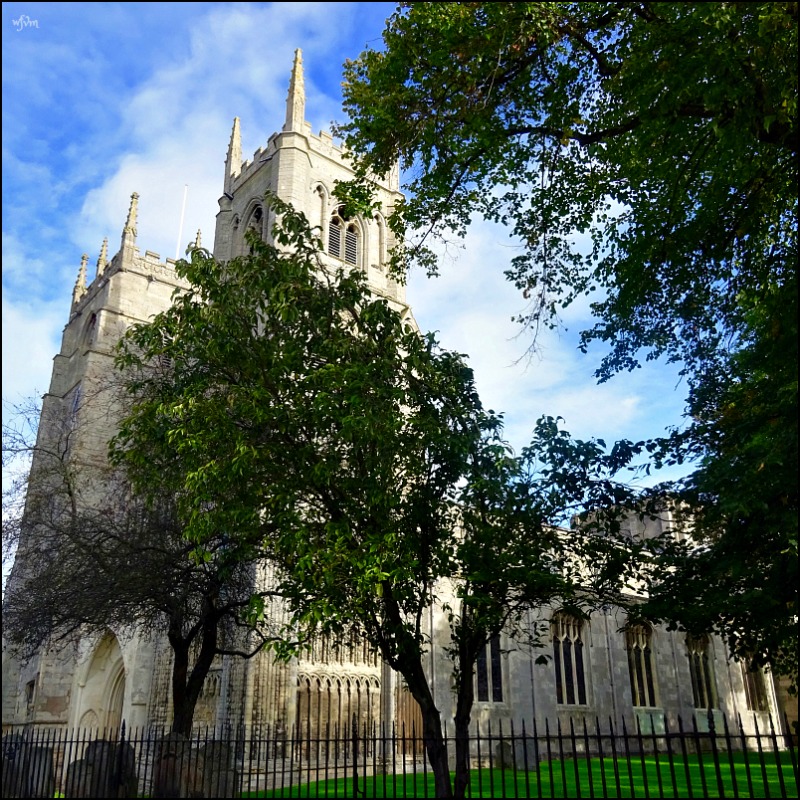 The Minster and Priory Church of St. Margaret's
The next post will commence at the Minster, but now it is time to find Tuesday Market Place and retire for the night. 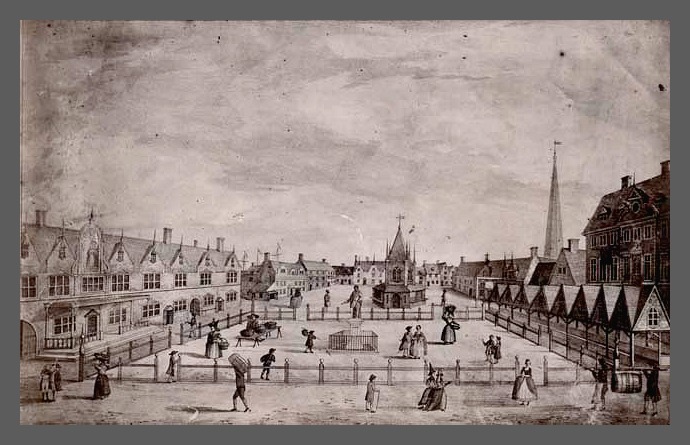 Tuesday Market Place in 1685 courtesy king's Lynn forums
Today Tuesday Market Place covers three acres but originally was even bigger. The dominant impression is one of Georgian brickwork, sash windows, square parapets and pediments over doors giving the area a feeling of grandeur. It has played host to traditional outdoor markets for hundreds of years, with stalls selling shellfish, mainly caught by the Lynn fishing fleets, as well as locally grown produce from the fertile Fens. This area is particularly known for its brown shrimps, prawns, cockles, crabs and lobsters. 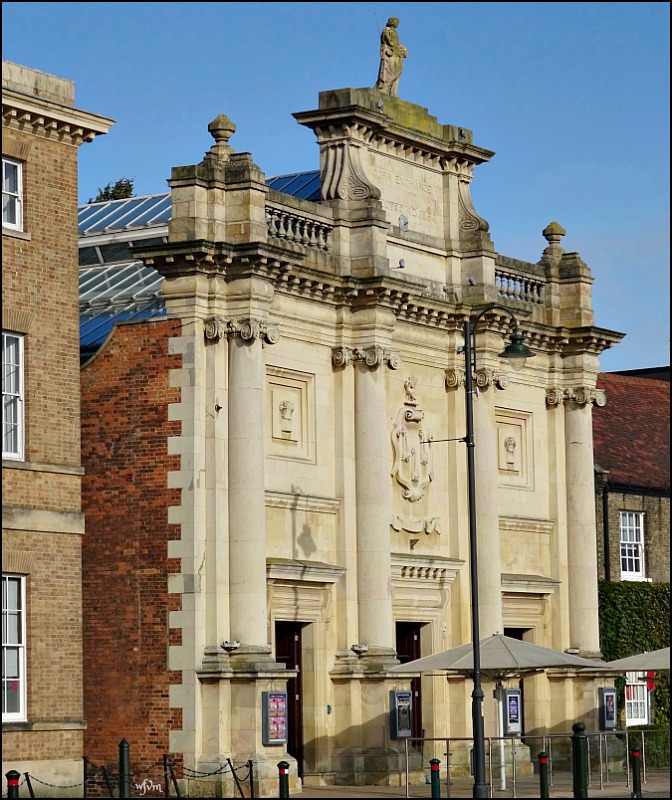 This Neoclassical Corn Exchange with its elegant stone facade sits on Tuesday Market Place, and is a typical example of the wide variety of architecture to be found around the square. Built by the Victorians it has now been reborn as a theatre. 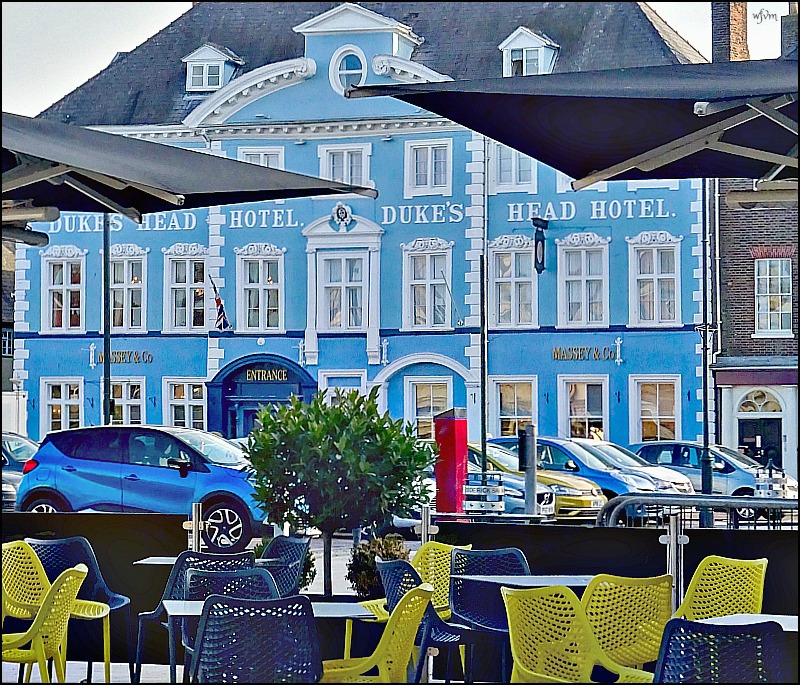 Opposite the Corn Exchange is this blue and white confection of a building built in 1683 for a King's Lynn Member of Parliament, Sir John Turner, and this is where we retired for night.
Posted by Rosemary at 11:23