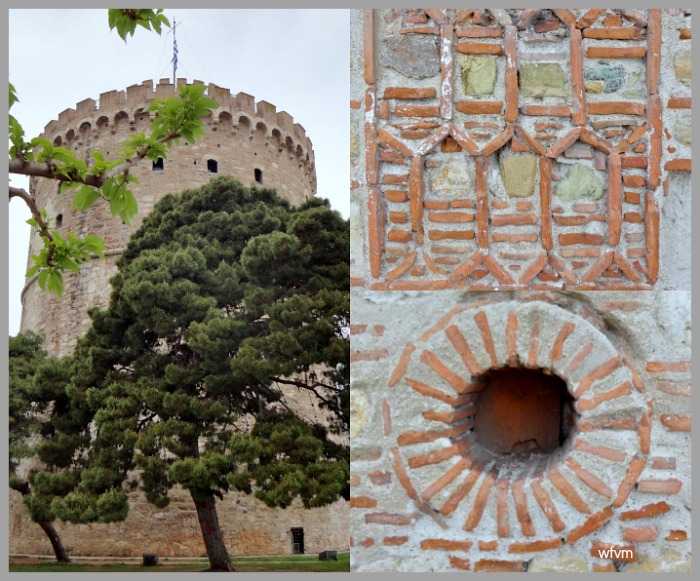 The White Tower built in the late 15th century is  regarded as the symbol of Thessaloniki, the second city of Greece. In the 19th century it was known as the Blood Tower as it served as a prison and place of execution for long term convicts. It is known as the White Tower following whitewashing by a convict in 1890 done in exchange for his freedom. It now hosts an exhibition showing the history of Thessaloniki, and it is possible to climb to the top of the tower to see the far reaching views. We had intended to do so, but that day weather systems carried in sands from the Sahara creating an overcast atmosphere.
The main focus for our visit was to see the exquisite gold from ancient Macedonia.
The 16 ray star covered the royal burial larnax of Philip ll of Macedonia 359 - 336 BC discovered in Vergina, Greece. Philip was King of Macedonia and conqueror of lllyria, Thrace, and Greece. To him is attributed the phrase divide et impera - divide and conquer. He was the father of Alexander the Great. 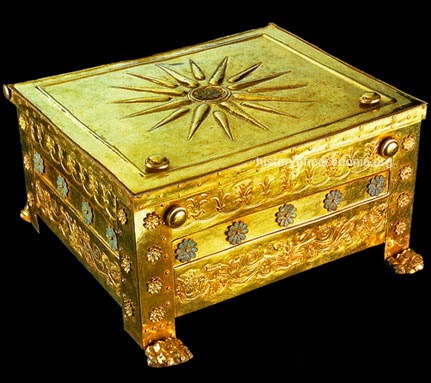 Gold was used in the ancient world by those who had power; mainly kings and the priesthood.
It was also used by the aristocracy and classes who had economic power depending on the political, and social conditions prevailing at the time. 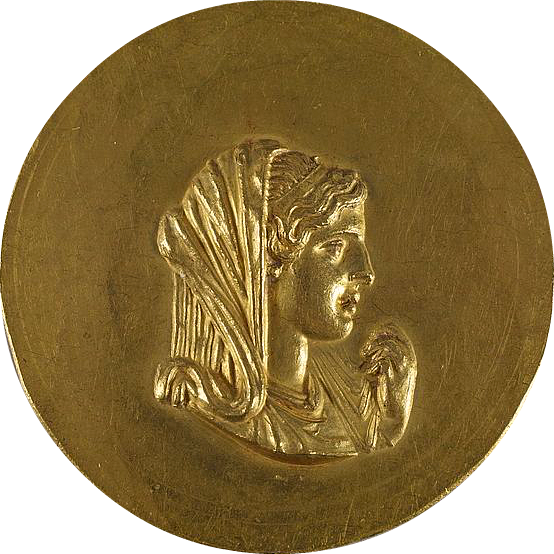 Gold medal of the athletic games that were held in Beroea in 225-250 AD in honour of Alexander the Great. It belongs to a hoard of medals found in Abukir, Egypt, depicting portraits of the family of Philip ll. Olympias is depicted on the obverse, she was the fourth wife of King Philip ll, and mother of Alexander the Great.  She was a devout member of the snake-worshiping cult of Dionysus. 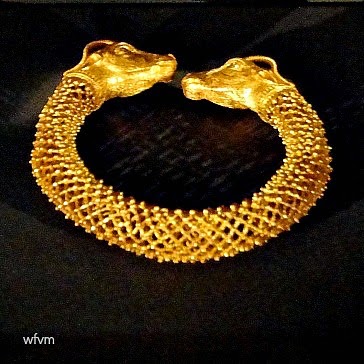 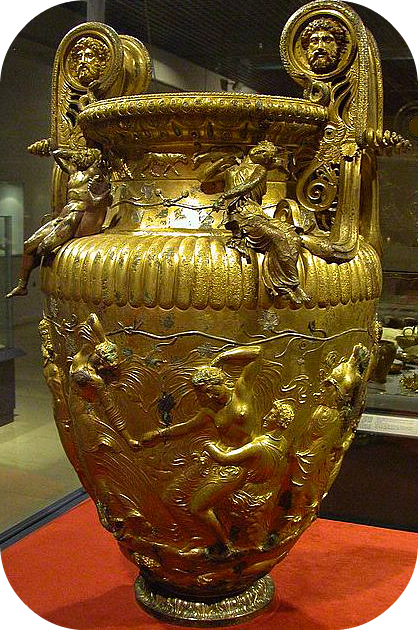 In 1962 whilst widening Thessaloniki's Langada Street several tombs were discovered. Pride of place amongst the finds was this bronze Krater (wine vessel) with its unique workmanship depicting scenes from the Dionysian cycle. The tombs were dated to the last quarter of the 4th century BC.

A gold myrtle wreath, a religious symbol which also indicates the wearers social position. It was worn for public appearances, religious celebrations, and it accompanied the owner to the grave. 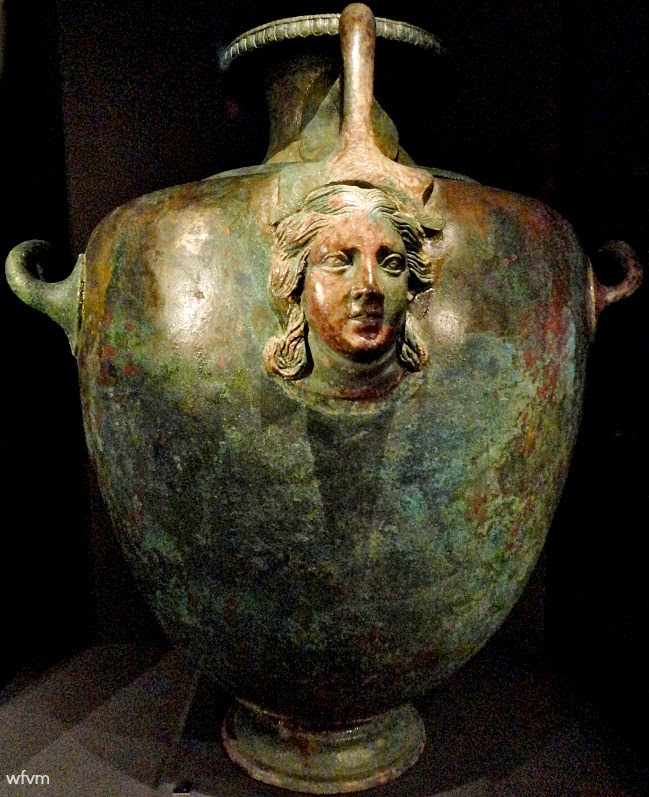 Bronze hydria, a vessel used to carry water. The vase was made in the 5th century BC - the area below the woman's head was repaired at the end of the 4th century BC. 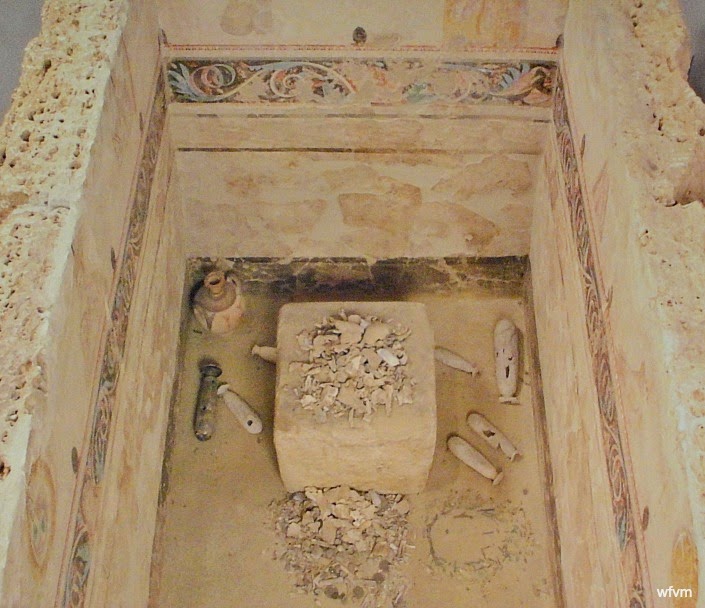 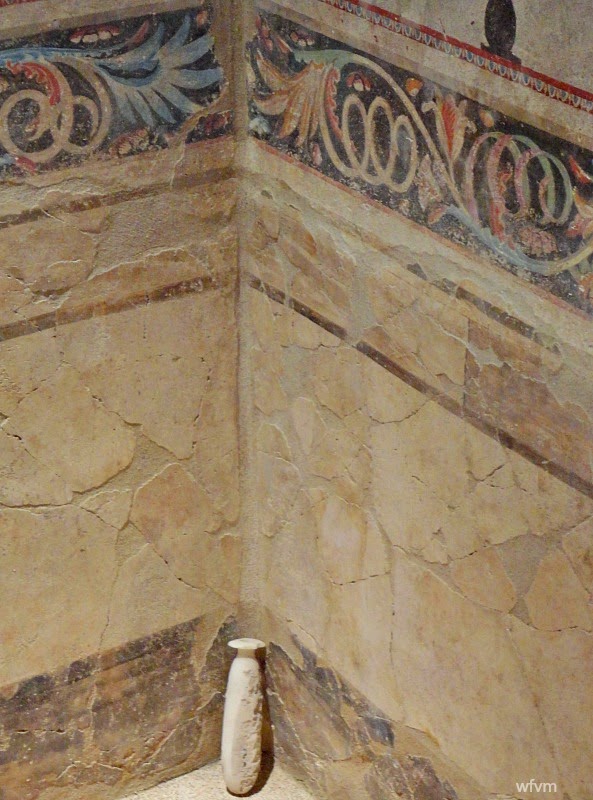 The bones of a young woman and her newborn infant were placed in a wooden box on top of a pedestal.
The painted decoration of the tombs interior reflects and imitates the architectural details of the walls in the woman's home when she was alive. Objects from her everyday life were hung from nails or were placed on a shelf.

Whilst looking at the design running around the top of the female tomb I was reminded of Florentine paper inspired by traditional Renaissance patterns. However, the tomb's design was 1700 years old by the time the Renaissance commenced. 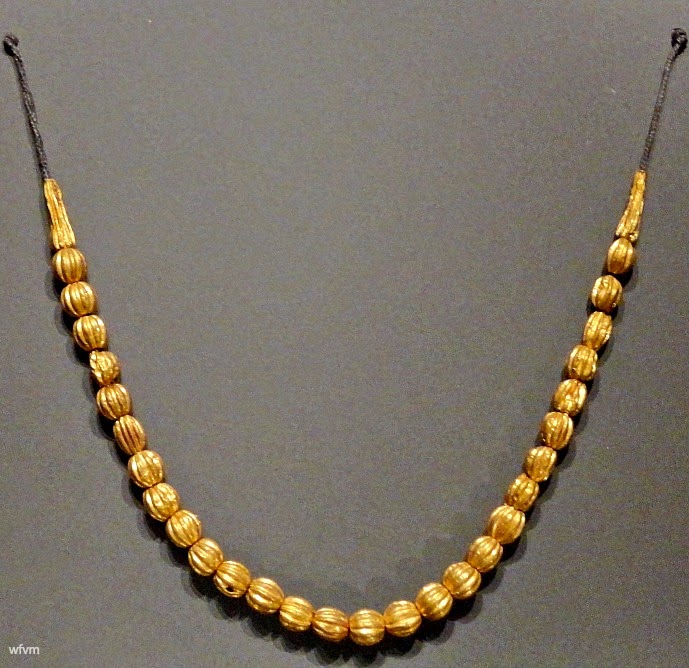 Gold necklace from a female burial at the cemetery of Pydna 5th and 4th century BC. 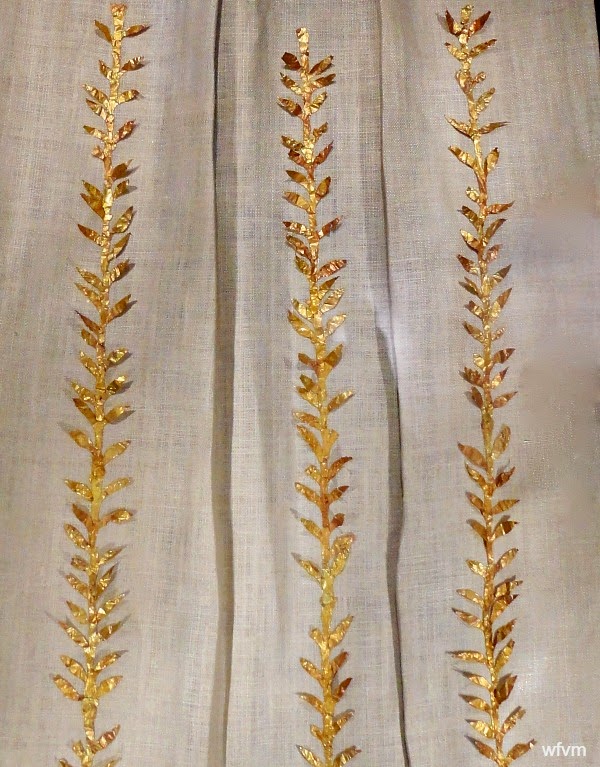 Sheets of gold were used as clothing decoration and frequently embellished burial garments, particularly in the Archaic and Hellenistic periods.
Generally women were buried with their heads facing east wearing all of their jewellery, whilst men were buried facing west wearing full armour. 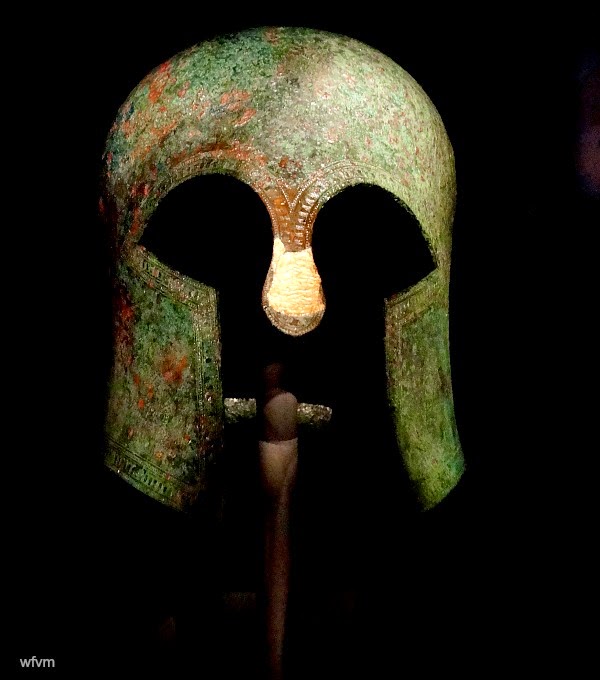 Corinthian bronze helmet decorated in gold sheet
Ancient goldsmiths were considered artisans rather than artist. This is why they did not sign their work, and there are no names preserved. Furthermore, the written sources are especially vague in conveying information concerning the nature of the goldsmith's work and the social position of the profession.
Posted by Rosemary at 08:41