This extremely wary young Jay spent a long time in the garden yesterday - Sunday, entertaining us. We delighted in his slow and deliberate wing flapping as he jerked between the tall climbing plants before flying into our large Hornbeam tree. He would then fly down to the ground where he appeared to find food in and on the ground to satisfy his omnivorous needs. Jays are highly intelligent and the harsh raucous call you often hear is just part of a very wide repertoire. He can raise his crown feathers up into a crest when excited or displaying. I say 'he' but the bird might have been a female - they both look alike. I love the colour of the dusty pink feathers offset by the flashes of baby blue on the wings. 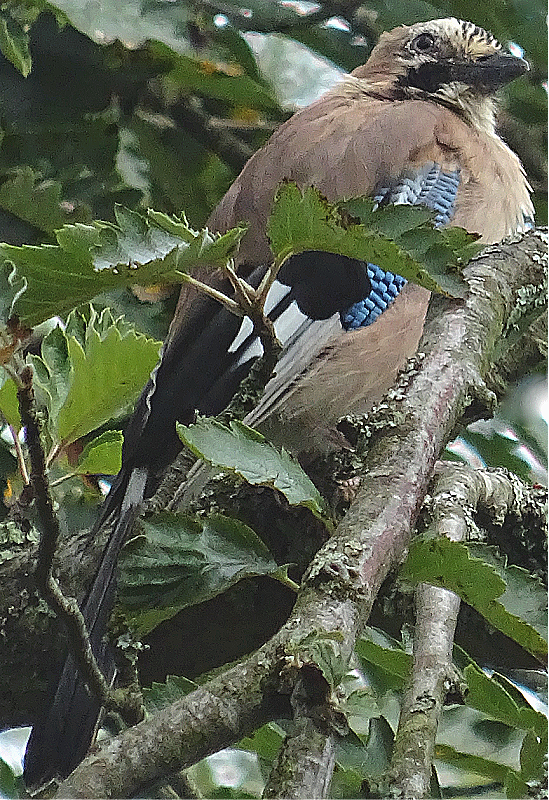 The Jay was one of the many species originally described by Carl Linnaeus in his landmark 1758 10th edition of Systema Naturae. He recognised its affinity with other corvids, (does that name have a familar ring?) naming it Corvus glandarius. The current scientific name is from Latin; garrulus means noisy or chattering, and glandarius is "of acorns", a favoured food.
Their intelligence is similar to other corvids - jays have been reported to plan for their future needs. Male jays also take into account the desires of their partner when sharing food with her as a courtship ritual, and also when protecting their food items from stealing by other members of the same genus i.e. magpies, rooks, crows, ravens, choughs, and jackdaws.
In order to keep their plumage free of parasites, they lie on top of anthills with spread wings allowing their feathers to be sprayed with formic acid by the ants.
Posted by Rosemary at 11:30