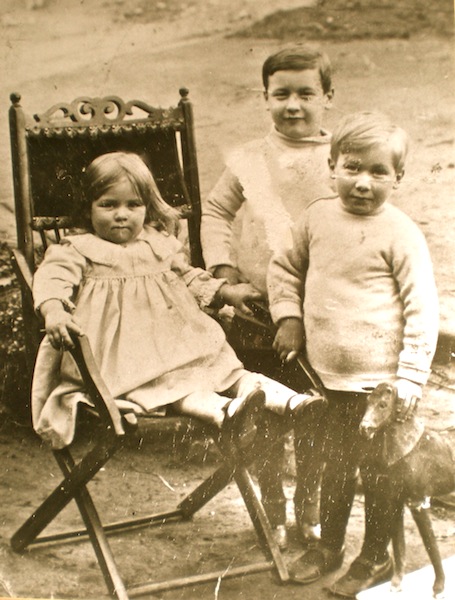 A picture of MiL aged about 3 years with two of her brothers
My MiL was a real character, although I did not always think so at the time. She often saw things completely differently to other people. In retrospect I can see that much of what she did was very amusing, although at the time many of us in the family did not necessarily think so.
She was very thrifty and did not like to spend money. This resulted in her having gadgets that did not work properly because she retrieved things that other people threw out. 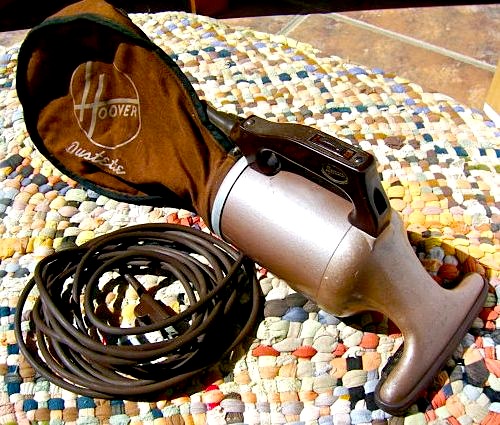 She had a little handheld hoover, which was very heavy and had a bag that would swell when used. It was more than likely thrown out by someone else because there was a hole in the bag. She had carefully patched and stitched the hole up and was very happy with it. I use to watch her whizzing around, the dust being sucked up at the front and blown out through the patch at the back. I did not have the courage or heart to tell her, but just watched in amusement.
She would hang her perishables in a little meat safe in a tree. A box with grill windows all round. This would drive animals in the area mad with desire. She had a fridge but did not switch it on, because of the purring sound it made, and knowing that it was using electricity day and night drove her to distraction. This became a major problem for us when visiting one year. Our eldest son became very ill, and it turned out to be Scarlet Fever. He was prescribed a double course of antibiotics. He had never taken them before, and this resulted in her having to have the fridge switched on to keep the antibiotic fresh!!! She did not believe in illness, doctors, hospitals or inoculations, and kept saying "that old stuff cannot be doing him any good" and in exasperation I would repeat that we had to do as the doctor advised. Of course she was proved right, it turned out that our son was allergic to the antibiotic and his face blew up like a balloon. She said "I knew it was doing him no good".
She never had a washing machine, and when H bought me one, her reaction was "well done, well deserved". Everybody knew what she meant when she said things like that.
Her Grandson bought one half of an architecturally interesting Victorian Lodge/Gatehouse to a big house when he got married, and her comment was "good of him to take it on".
She did not send H to school because he was happy playing around on the farm. It also would have meant a very long walk for her to get him there along the country lanes. The School Inspector came to see her when H was nearing six to see where he was. She said he was very happy as he was helping his father on the farm. It did not seem to do him too much harm, he still passed his scholarship and got a place at the local Grammar school when he was only ten, the usual age being eleven.
She was a very hard worker, and a thrifty saver. She never spent anything on herself. A trait which has been inherited by H. He is, however, very generous towards everyone else. H's father would take us on one side and say "you would not believe how much money your mother has saved", she was completely unaware that he had looked at her private Post Office savings books!
One year we went on holiday with them to the coast. We had travelled down from Scotland, where we were living to Surrey with our eldest son, who was still a baby. In those days that was a really long journey in our little Mini car. The following day we set off from their home for the coast.  It was a journey of about 35 miles, but along winding country roads. We were in our car and they travelled ahead of us. When we arrived she was in a panic, she had left some of her saved money squirrelled away in a secret place, and was worried that she might die and no one would know where it was. I had to turn our car around, and drive her all of the way back again so that she could retrieve the money. Very annoying and tiring at the time, but funny when looking back. 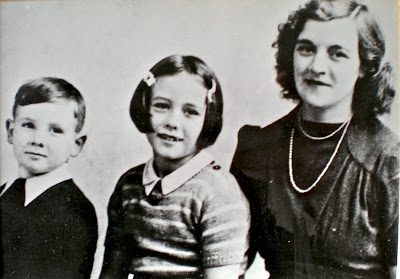 H with his mother and sister

The sad thing is, if she had been educated to a higher level, she had the potential and character to have been very successful in some sphere of life. She is still an ever present memory to us all.
Posted by Rosemary at 08:13

Email ThisBlogThis!Share to TwitterShare to FacebookShare to Pinterest
Labels: Family