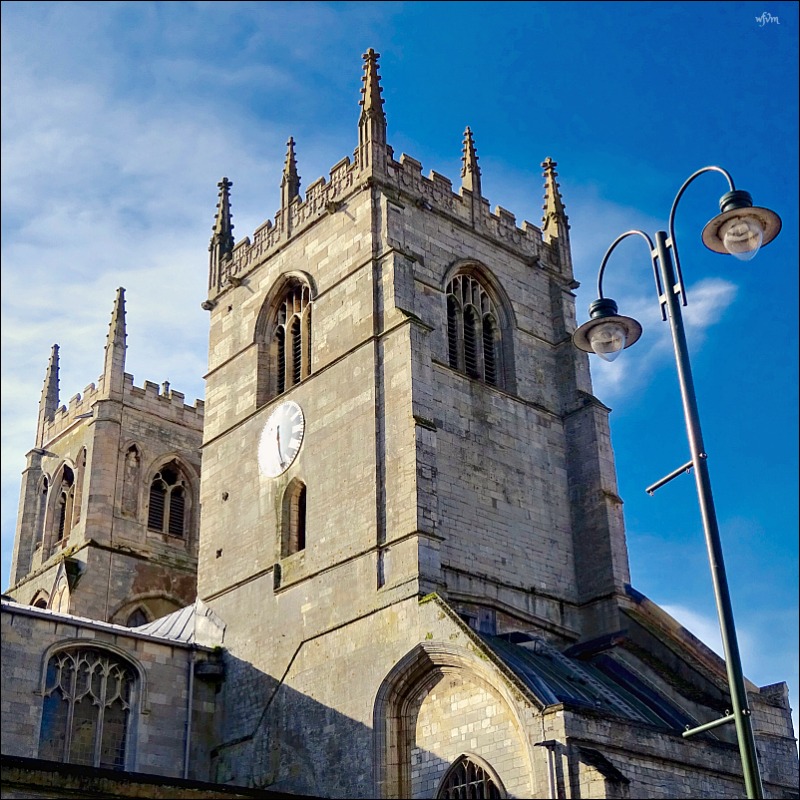 In 1101, Bishop Herbert de Losinga began constructing medieval King's Lynn. He commissioned St. Margaret's Church, now called the Minster, and in that same year he granted the people of Lynn the right to hold a Saturday market oposite the church which became a major attraction to European traders seeking wool and cloth. At this stage the town was known as Bishop's Lynn, but the name changed to King's Lynn following the Reformation. However, to the local people it has always been known as 'Lynn'. 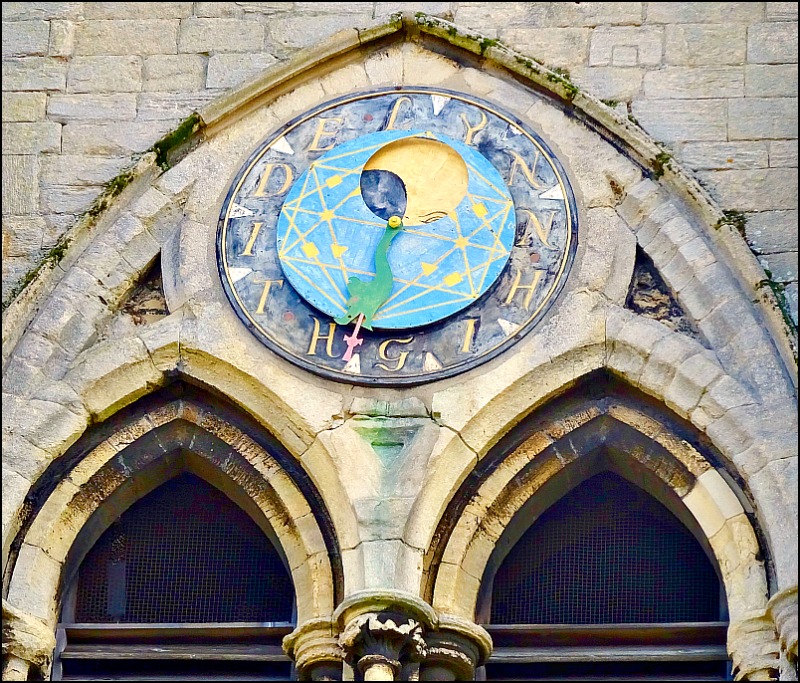 On the south tower of the Minster is a tide clock, sometimes called a moon clock, presented to the church in 1683. The lettering reads Lynn High Tide, and a green dragon's tongue shows the time of the next high tide. It was easily visible from both the port and the river and a useful aid to the sailors and merchants. 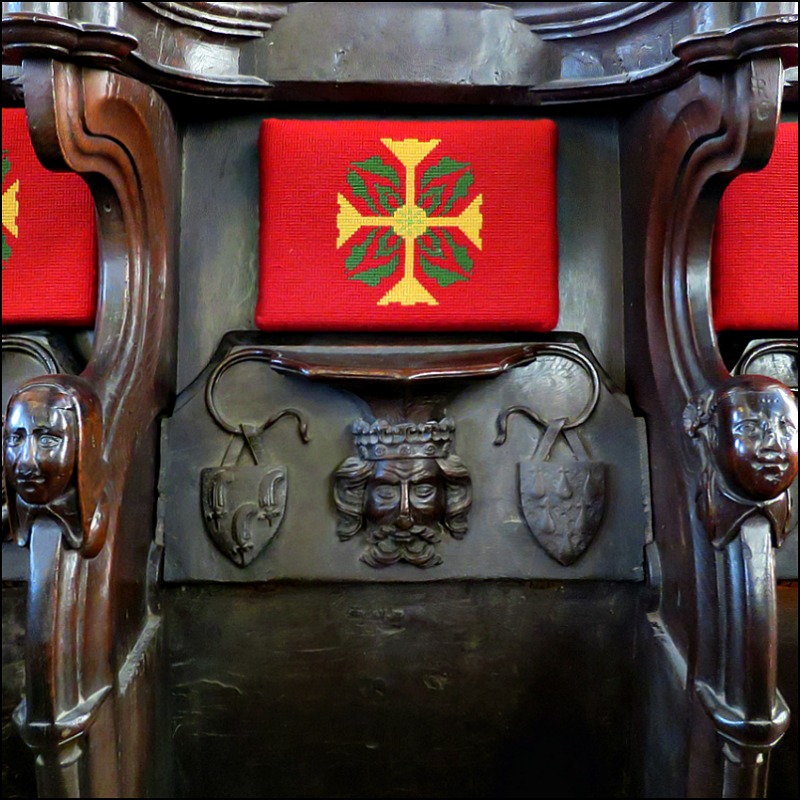 This 14th century misericord depicts Edward the Black Prince and shows his shield mounted with three ostrich feathers, an emblem used by all subsequent Prince of Wales, including Prince Charles. The Black Prince never became king as he died before his father Edward lll. His son, Richard ll, was only 10 years old when he succeeded to the throne. 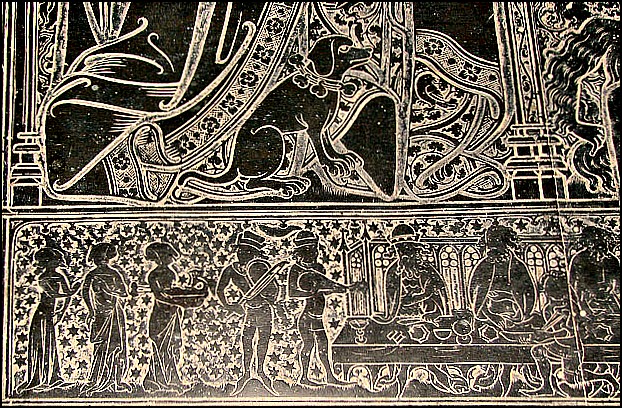 Adam Walsoken died 1349 and Robert Braunche died 1364. Both were King's Lynn mayors and major figures in the Great Guild whose chapel was in St. Margaret's.
Their two memorial brasses are amongst the largest and most elaborate to be found in this country. As a result of the towns strong German links, they have been attributed to Flemish artists working in Bruges. It is known that the visiting German merchants also commissioned similar high status Flemish memorials for themselves.
These two large brasses are set into the church floor making them notoriously hard to photograph. The angles are difficult as are the reflections caste down on the brasses from the large windows. The image above reveals just one very small detail of a celebrated peacock feast that Robert Braunche staged for King Edward lll in 1349. 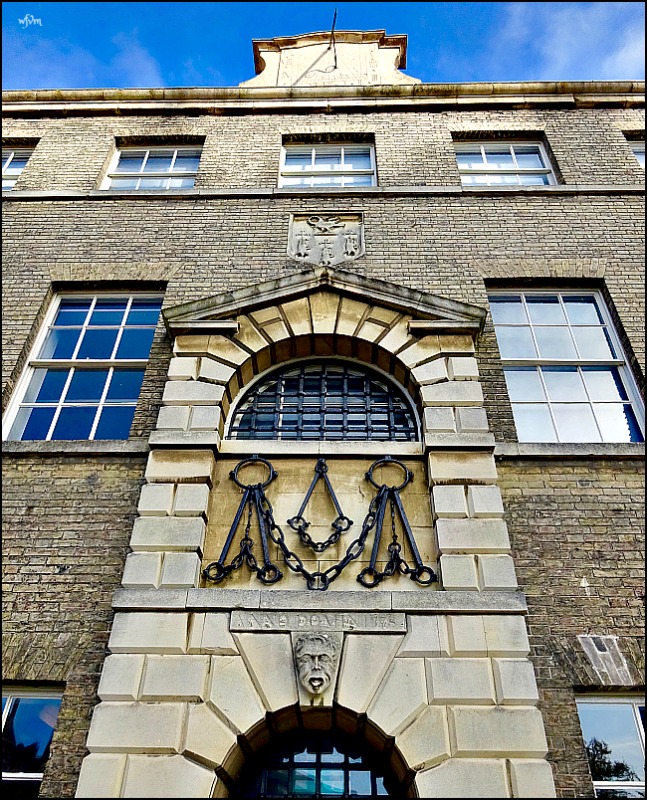 Across the road from the Minster several of the town's important civic buildings line the area known as Saturday Market. The Old Goal House is now a museum but for 400 years it is where Lynn's most notorious citizens were imprisoned. 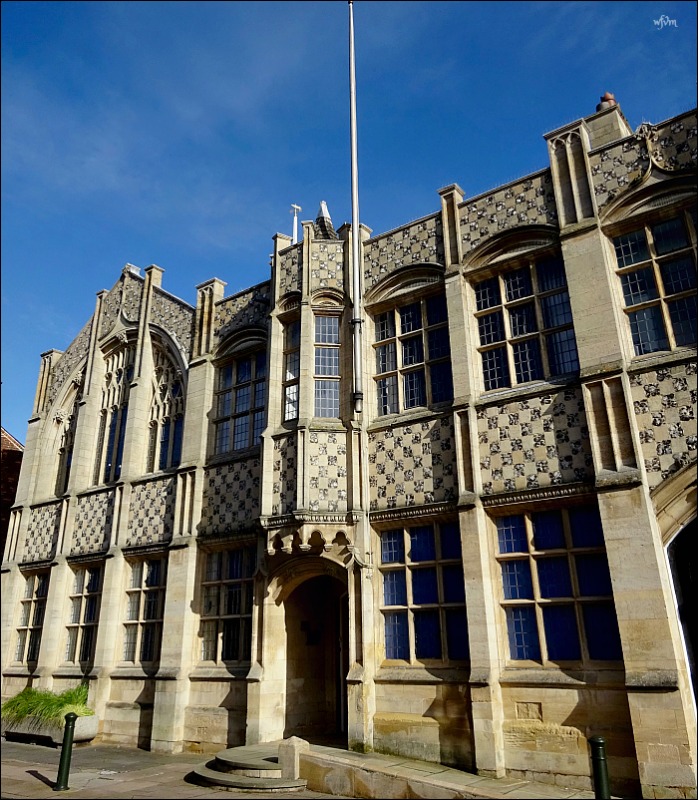 Stone was a scarce commodity in East Anglia, whilst flint was easily found in the ground and on the beaches. The chequered board solution used here was an inspired outcome, and also aesthetically pleasing. 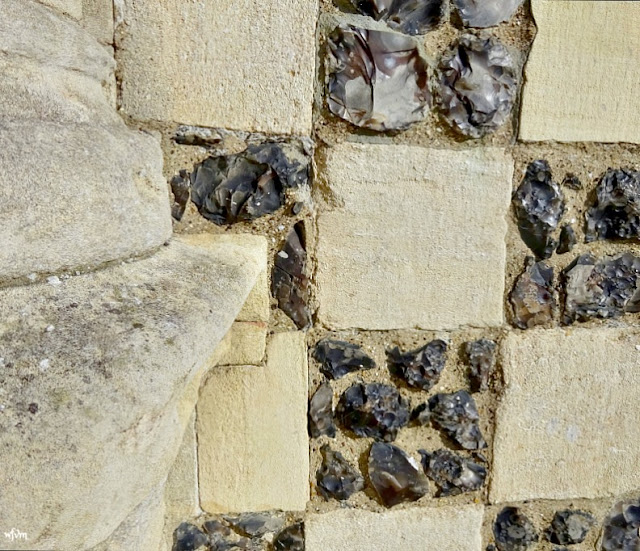 This a close up to show just how the medieval builders achieved it. 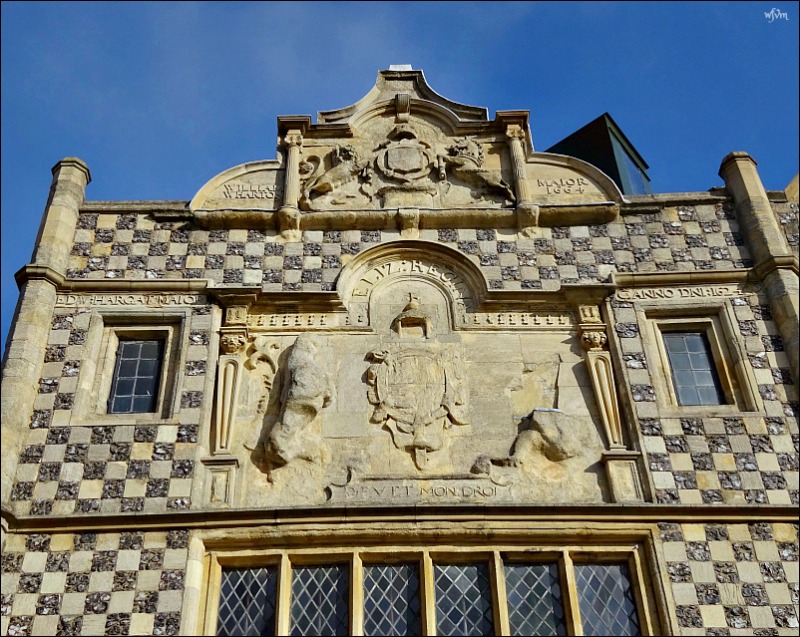 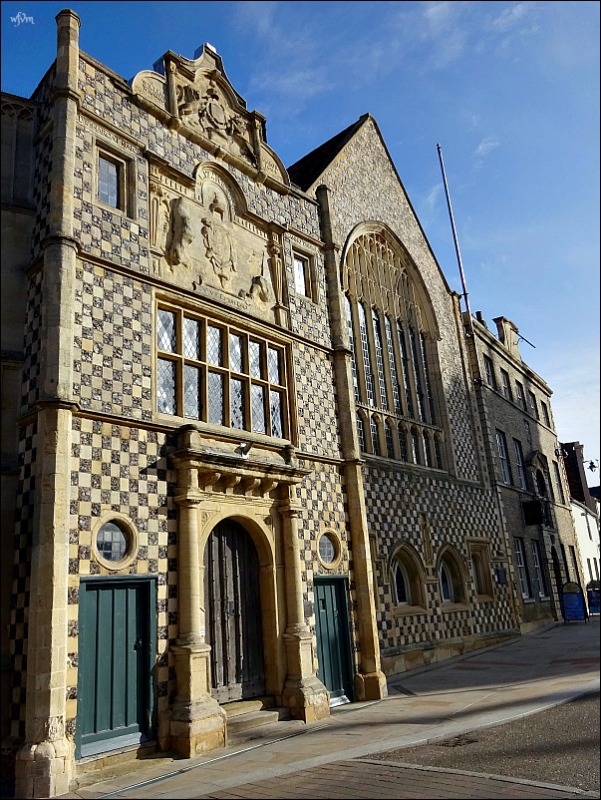 This series of magnificent Trinity Guildhall buildings date back to the 1420s, they have impressive windows and all have a distinctive stone and flint chequer board patterned, plus a Jacobean porch added in 1624. Lynn merchants were men of considerable wealth generated by their overseas trade, they dominated both the Town Council and the Holy Trinity Guild. 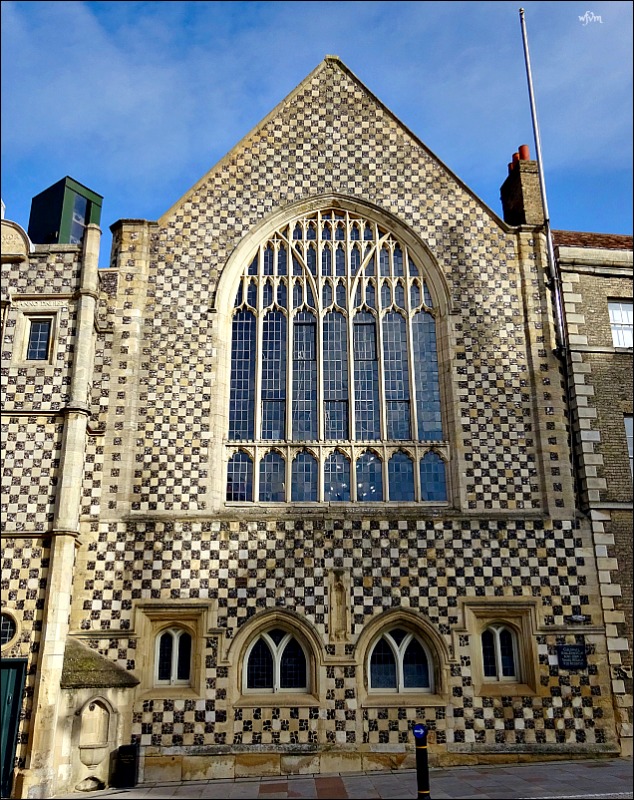 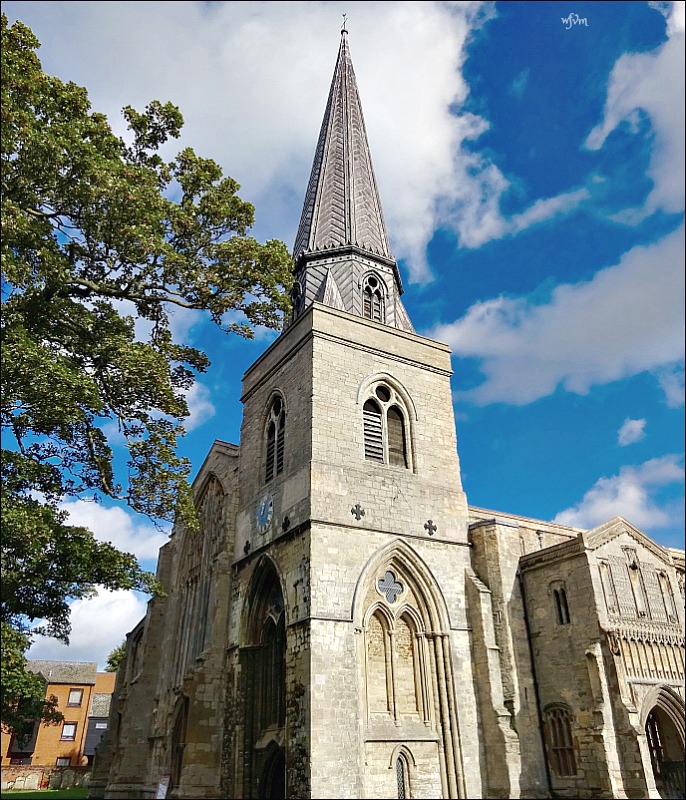 St Nicholas' Chapel is now in the care of the Churches Conservation Trust, but is still consecrated, and has occasional services. It was built as a 'chapel-of-ease' to the Minster, and is the largest chapel of its kind in England. Light floods in from its windows highlighting 900 years worth of treasures.
The spire is a replacement designed by Sir George Gilbert Scott in 1871 as the original spire was blown down in a storm in 1781. 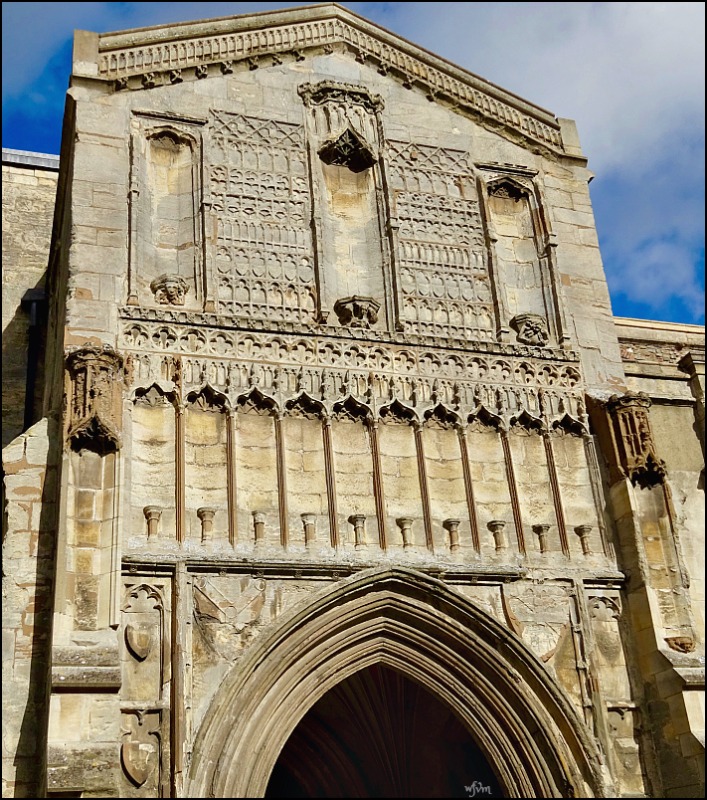 This exquisite medieval south porch with several empty niches originally held painted stone figures. Now a shadow of its original self, it is a reminder of how impressive and colourful it would have been prior to the Reformation. 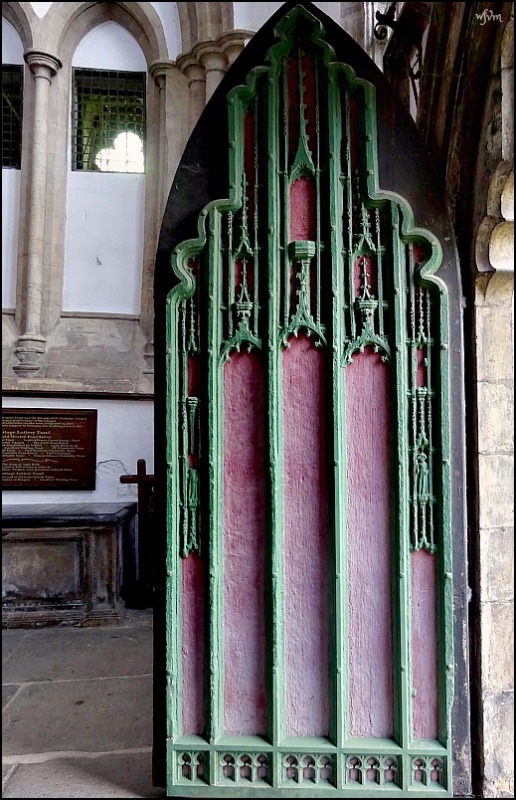 The west door has wooden panels dating back to 1400, and is a little treasure. It has recently been restored and painted in it's original green and terracotta colour scheme. 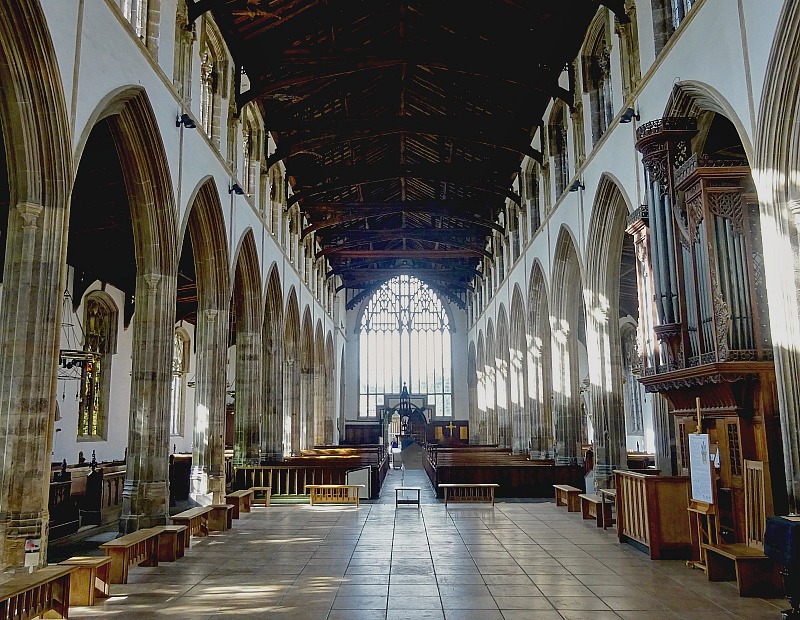 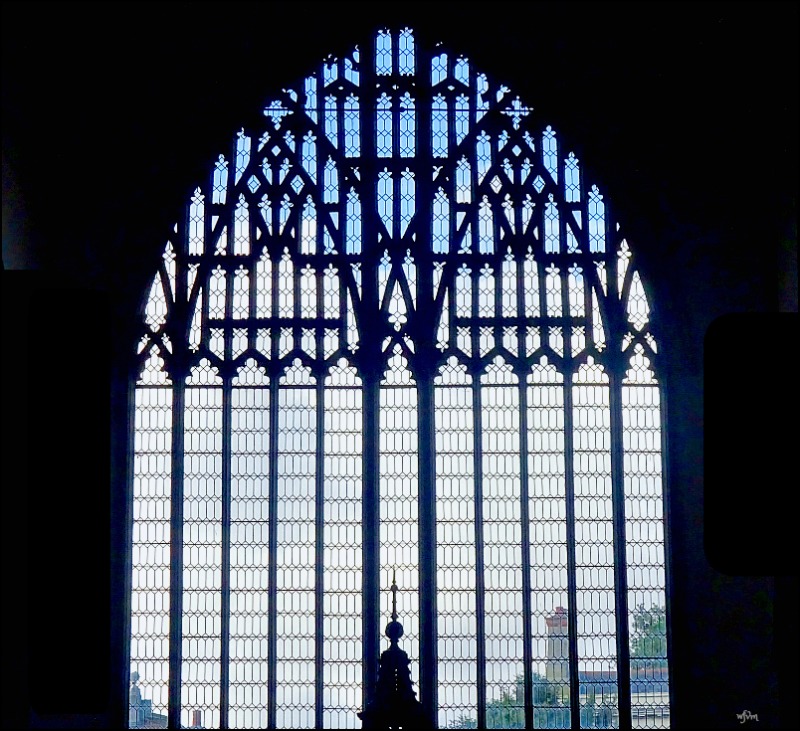 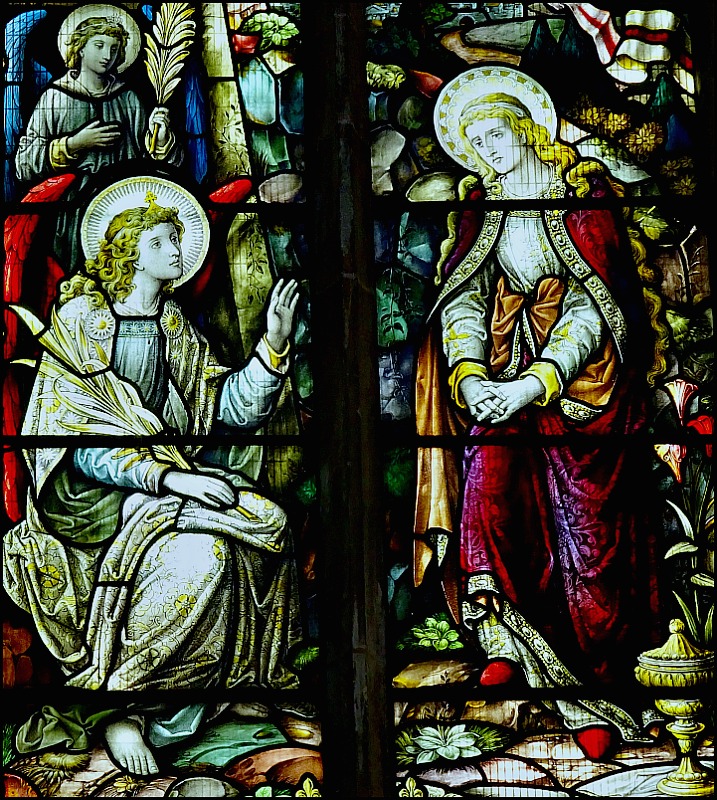 There are now just four stained glass windows in the Chapel, and this one in particular caught my eye. It resembles the work of the pre Rapaelite Brotherhood, but I have been unable to find out who designed and made it. 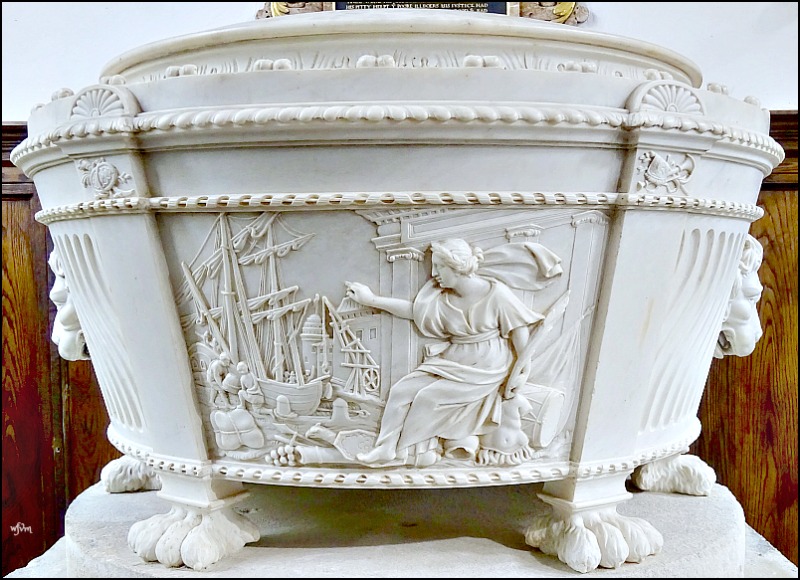 courtesy V&A
The craftsmanship of the woodwork in the chapel was of such high quality that some of its most famous medieval bench ends are now in the Victoria and Albert Museum, London - unusually two of them show sailing ships in full rig.
However, the carved wooden angel roof still has it's 24 angels keeping a keen eye on everything taking place below, as they have done since 1415.
With outstretched wings they either play an instrument or sing, just one angel holds a hammer and four nails being the symbol of 'Christ's Passion'. 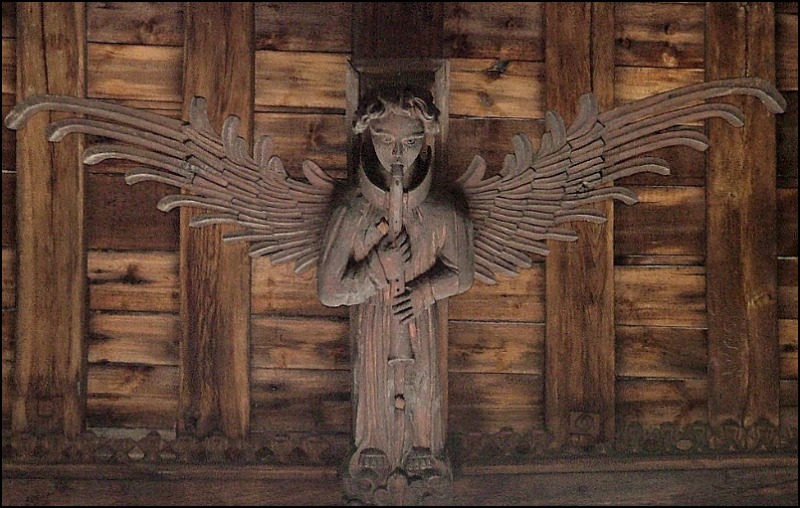 Angel playing a recorder - this is the earliest portrayal of this instrument in a church carving.
Because the angels are so high up it is impossible to see all their details with the naked eye, so when I saw this angel on the computer, I enjoyed the fact that the craftsman had given it some cute little toes. 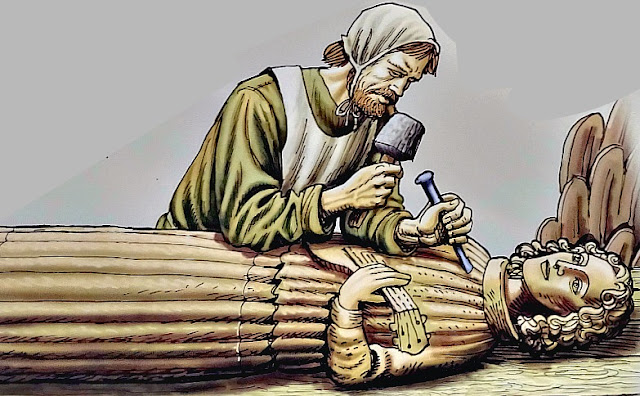 It is clear to see that each angel has been worked on by different carvers; some are more refined than others. 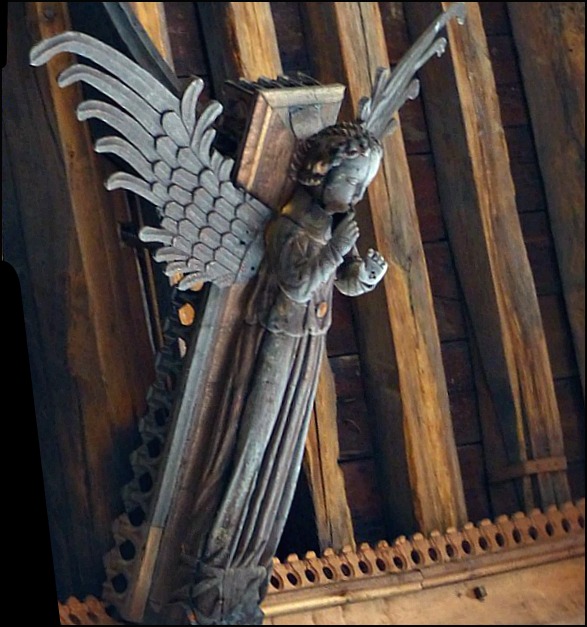 An angel playing what appears to be a very small pipe instrument.
This is the oldest church angel roof in the country, the only other older angel roof is the one in Westminster Hall, London, which was carved 20 years earlier.
Posted by Rosemary at 09:34