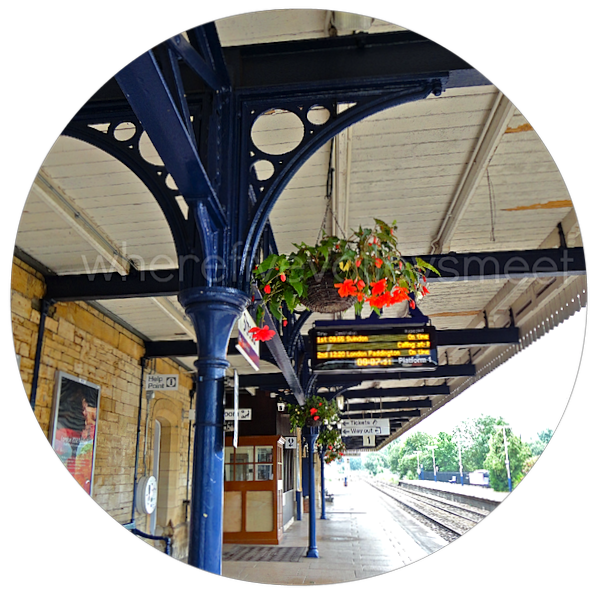 We left for the Moselle Valley from our local railway station, via London, to catch the Eurostar train to Brussels. Our station was part of the first major British railway construction for the Great Western Railway designed by Isambard Kingdom Brunel. 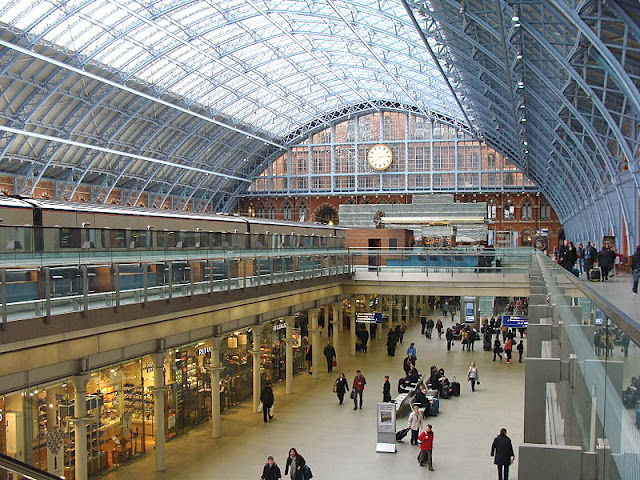 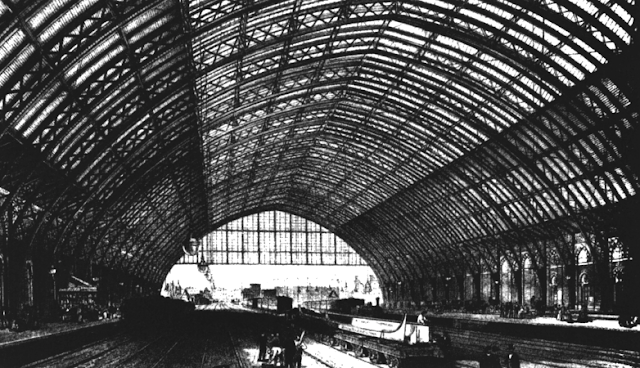 A contemporary and historic photo of the great train shed at St. Pancras.
via wikipedia

Departing for the Continent on the Eurostar train to Brussels rather than by plane was something that we had been looking forward to. We were keen to see St. Pancras following it's £800 million renovation which was opened by the Queen in 2007.
The train journey from London to Brussels takes two hours exactly. 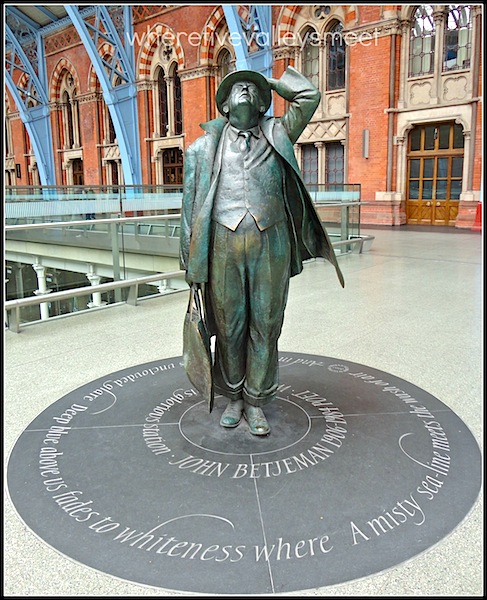 A fitting monument in the station is the statue of the late poet laureate John Betjeman, the people's poet. It was John Betjeman who helped to save St. Pancras from demolition in the 1960s, and it is only right that he should be honoured with a seven-foot high bronze statue on the main concourse of the new station next to the arrival point of the Eurostar train. The statue depicts him walking into the new station for the first time. He is looking up at the great arc of the train shed, which he always did because "it took his breath away". He is leaning back, holding onto his hat, his coat billowing out behind him, caught by the wind from a passing train, and carrying his large Billingsgate Fish Market bag of books. The sculptor, Martin Jennings, has skillfully captured his eccentric slightly shabby appearance. His shoelace and unkempt collar are undone. He has knotted string for one shoelace, and his right trouser leg is hitched at 'half mast' above his shoe. He stands on discs of Cumbrian slate inscribed with his name, dates, and the words "Who saved this glorious station", along with quotations from his poetry. Few poets could have a firmer place in the affections of all those who enjoy poetry than John Betjeman. 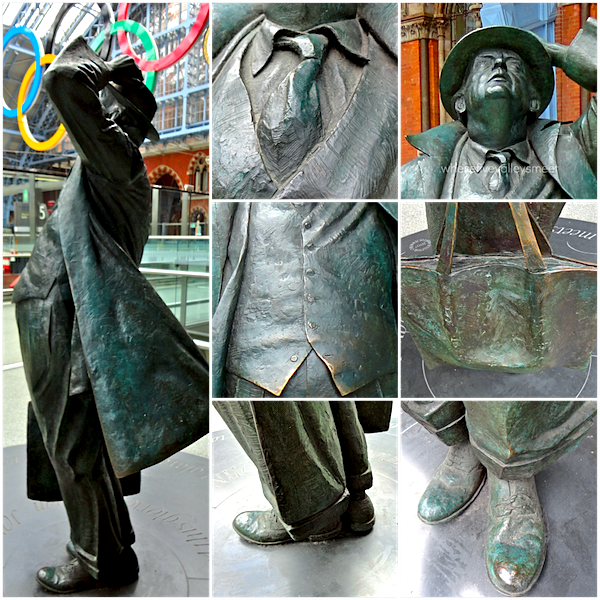 St Pancras is often termed the 'cathedral of the railways' and includes two of the most celebrated structures built in Britain during the Victorian era. The train shed completed in 1868 by the engineer William Henry Barlow was the largest single-span structure built up to that time. The frontage of the station encompasses the Midland Grand Hotel opened in 1873, and since restoration known as the St.Pancras Renaissance London Hotel, designed by Sir George Gilbert Scott. 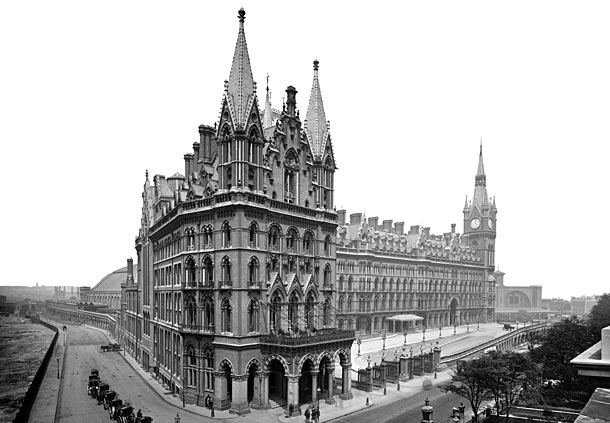 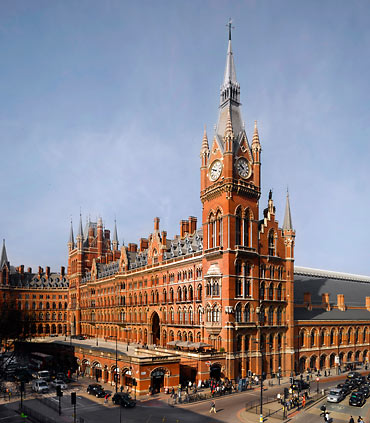 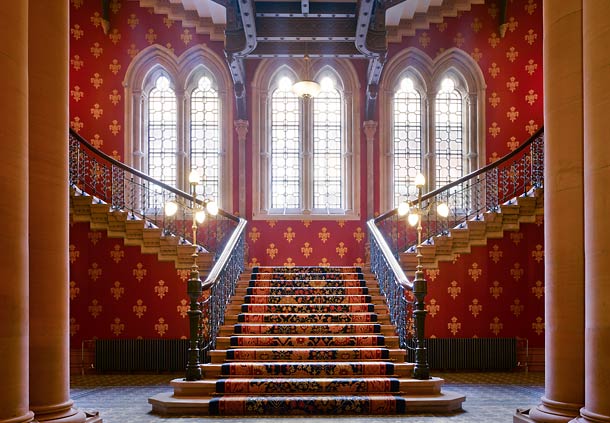 Sir George Gilbert Scott's lavish Victorian Gothic interiors, sharing similarities with Augustus Charles Pugin whom he was greatly influenced by.
The extraordinary double staircase is an example of high Victorian gothic decoration. The balustrading, in wrought iron, contains original gas fittings and snakes three stories up to a vaulted cathedral like ceiling. 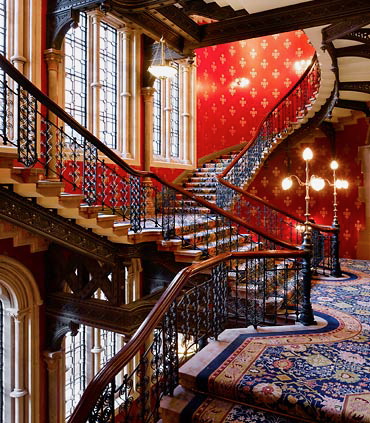 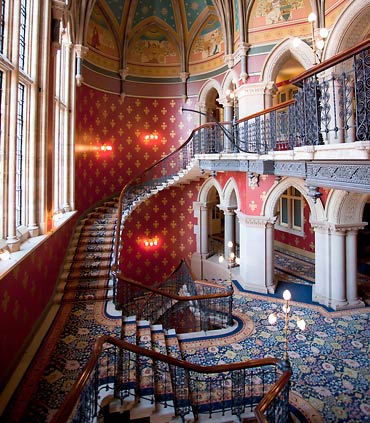 Lower part of the ceiling visible 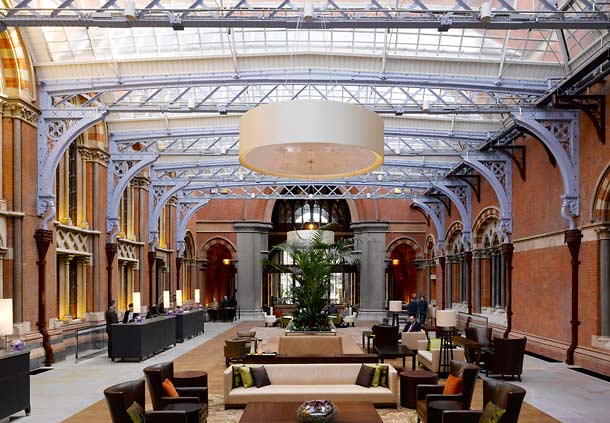 The central atrium in the hotel
images courtesy Marriott Hotels & wikipedia
Posted by Rosemary at 08:33