Two birds flying high,
A Chinese vessel, sailing by.
A bridge with three men, sometimes four,
A willow tree, hanging o'er.
A Chinese temple, there it stands,
Built upon the river sands,
An apple tree, with apples on,
A crooked fence to end my song. 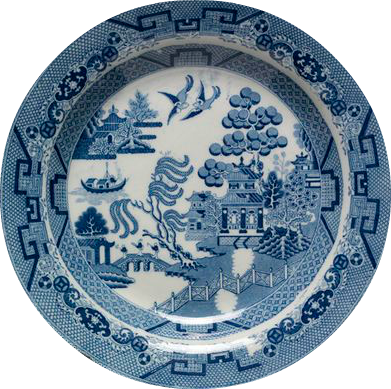 via
The childhood home that I grew up in had an oak plate rack running around the dining room walls.  It held my mother's eclectic collection of blue and white china some of which was willow pattern. As a child I recall looking at the plates and wondering about the story behind the design - two love birds at the top, a little boat on a lake, three people crossing a Chinese style bridge, a Pagoda, a zigzag fence, and of course the depiction of the willow tree itself.
Willow Pattern is often assumed to be a story from China, but it was a tale conceived in England by Mintons, one of the major ceramics manufacturers, to promote and encourage people to buy their willow pattern wares.

Once there was a wealthy Mandarin, who had a beautiful daughter (Koong-se). She had fallen in love with her father's humble accounting assistant (Chang), angering her father. It was inappropriate for them to marry due to their difference in social class. He dismissed the young man and built a high fence around his house to keep the lovers apart. The Mandarin was planning for his daughter to marry a powerful Duke. The Duke arrived by boat to claim his bride, bearing a box of jewels as a gift. The wedding was to take place on the day the blossom fell from the apple tree.
On the eve of the daughter's wedding to the Duke, the young accountant, disguised as a servant, slipped into the palace unnoticed. As the lovers escaped with the jewels, the alarm was raised. They ran over a bridge, chased by the Mandarin, whip in hand. They eventually escaped on the Duke's ship to the safety of a secluded island, where they lived happily for years. But one day, the Duke learned of their refuge. Hungry for revenge, he sent soldiers, to capture the lovers and put them to death. The gods, moved by their plight, transformed the lovers into a pair of doves.