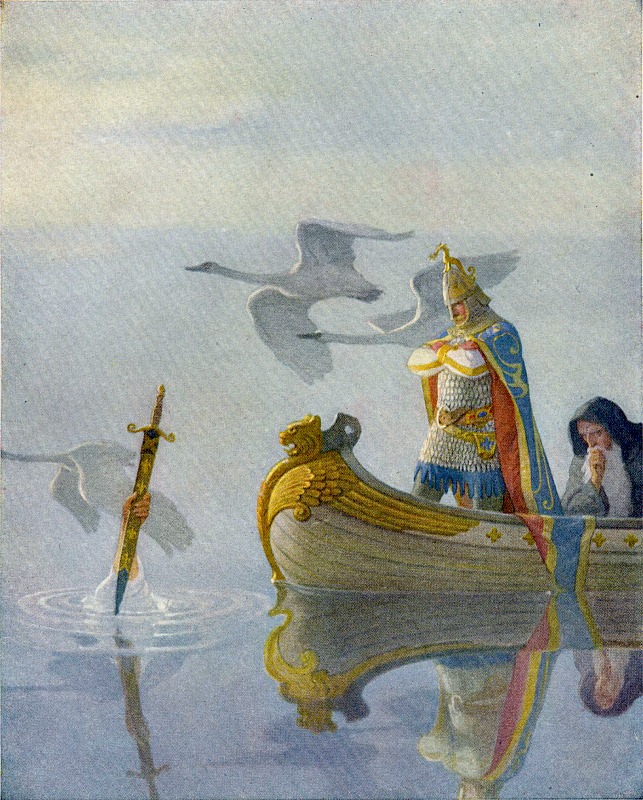 King Arthur, Merlin and the sword of Excalibur via wiki
Centuries of debate have surrounded the legends of King Arthur and the Knights of the Round Table as to whether or not they actually existed. On the adjacent island to coastal Tintagel, the remains of an ancient castle can be seen, and this has always been considered to be the prime candidate for his elusive home.
However, apart from a strong presence of his folklore in and around Cornwall there are also several other areas too that claim a history of tales surrounding King Arthur, all of which also happen to have strong Celtic links, two of which include Wales and Brittany in France. 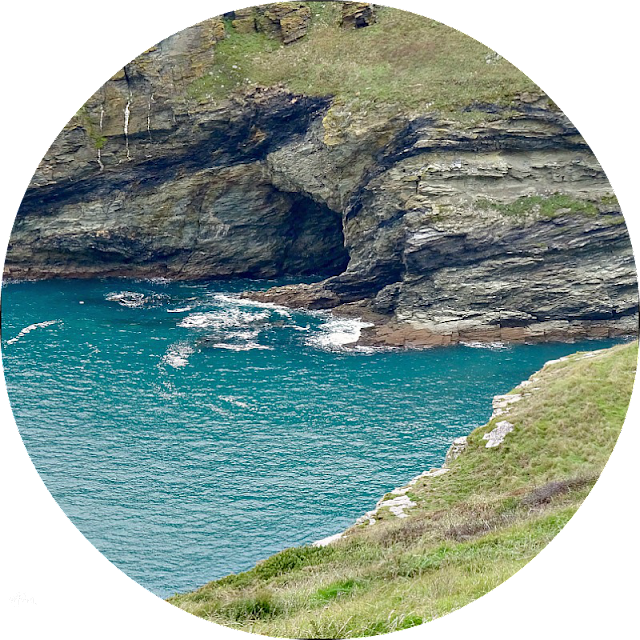 The photo from the previous post shows the Cornish island, known as Castle Island, and the cave sitting at the base of it is supposedly where Merlin lived.
Recently English Heritage have built and opened a brand new bridge making crossing over on to Castle Island from mainland Tintagel far easier. This has, however, resulted in a large influx of visitors, and even though we visited at the end of October, it was far busier than we anticipated. 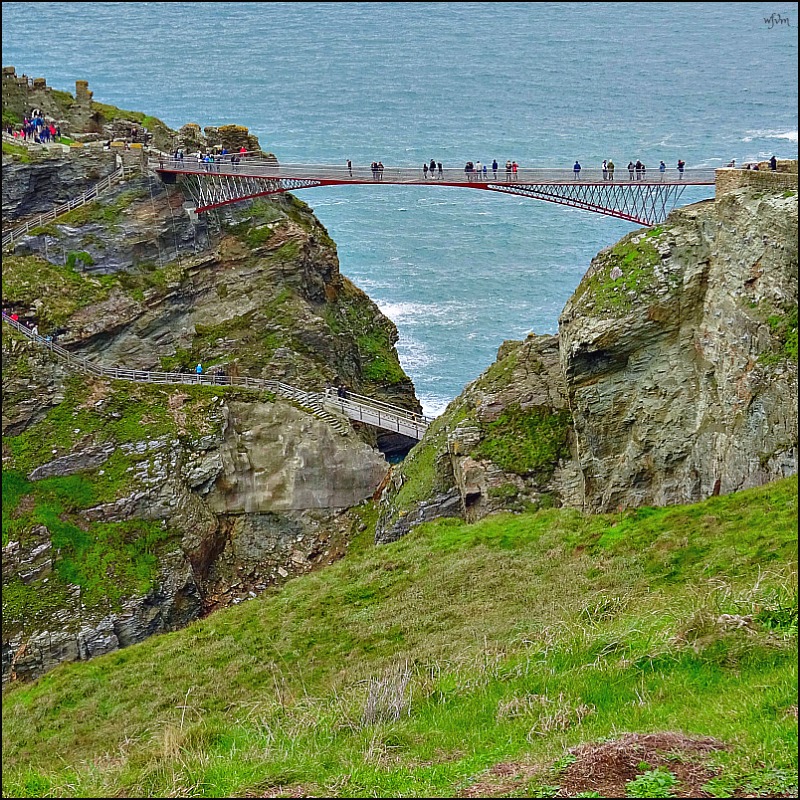 Walking the old route to explore the remains of 'King Arthur's castle' on the island is via a steep climb of over 100 zigzag steps to reach the summit, but now you can nip across on the new bridge quick and easily.
We, however, decided to simply view it from afar on the mainland, and then climbed back down to Tintagel via the ancient cliff top church of St. Materiana. 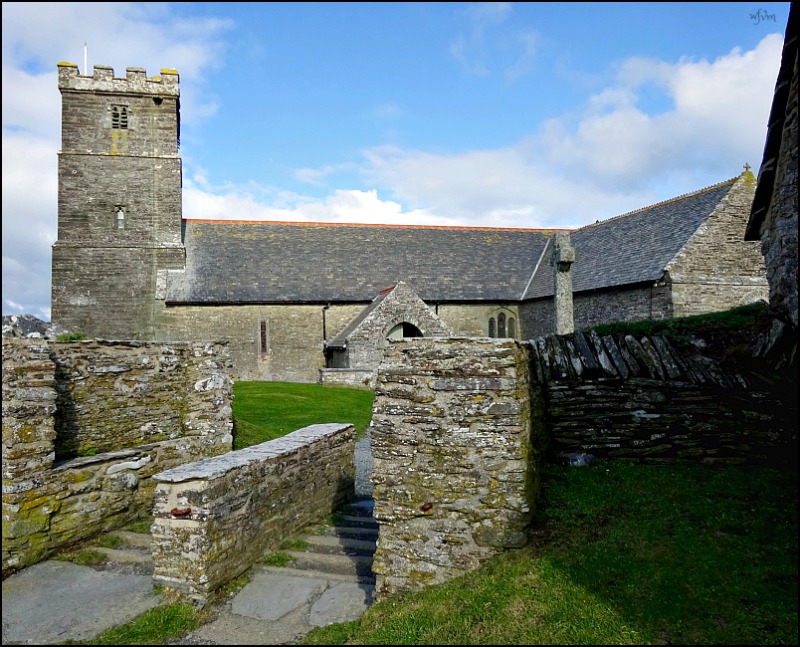 Do you know why the entrance pathway to the church has a seat either side with a small dividing central wall? It is what is known as a coffin rest;  there are not many church entrances like this, but in my experience they appear to be a feature seen more in this south western corner of the country. Where I live we have a local church with a lych gate that has a coffin rest. These too are rarely seen but if interested you can see the post I did showing it here. 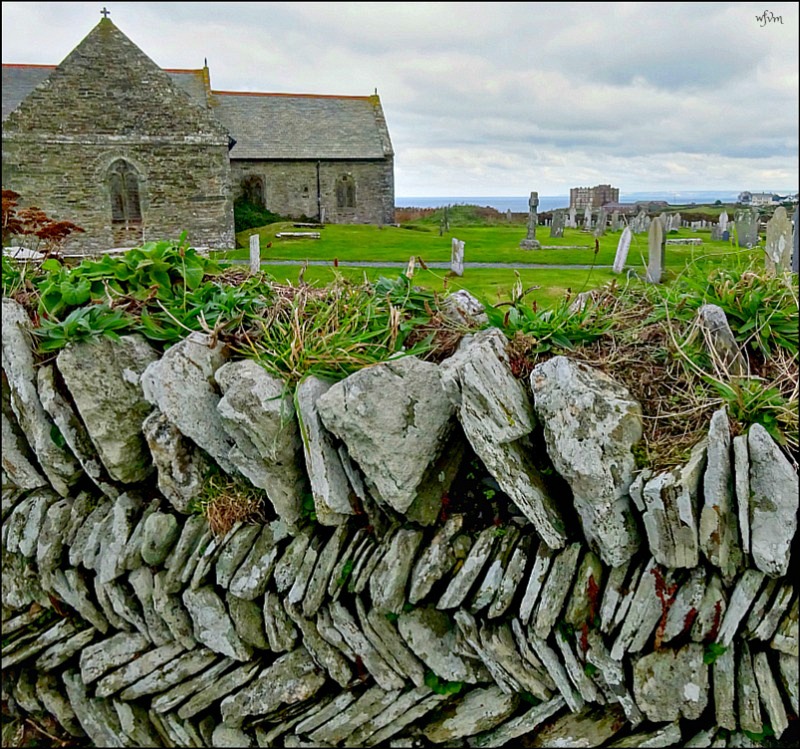 St. Materiana was built almost entirely as it appears today, in its cruciform shape of nave, chancel and transepts, between 1080 and 1150, in the time of the first Norman earls of Cornwall. The church was built on the site of an oratory served during Celtic days by the monks of Minster and later replaced by a Saxon-style building. 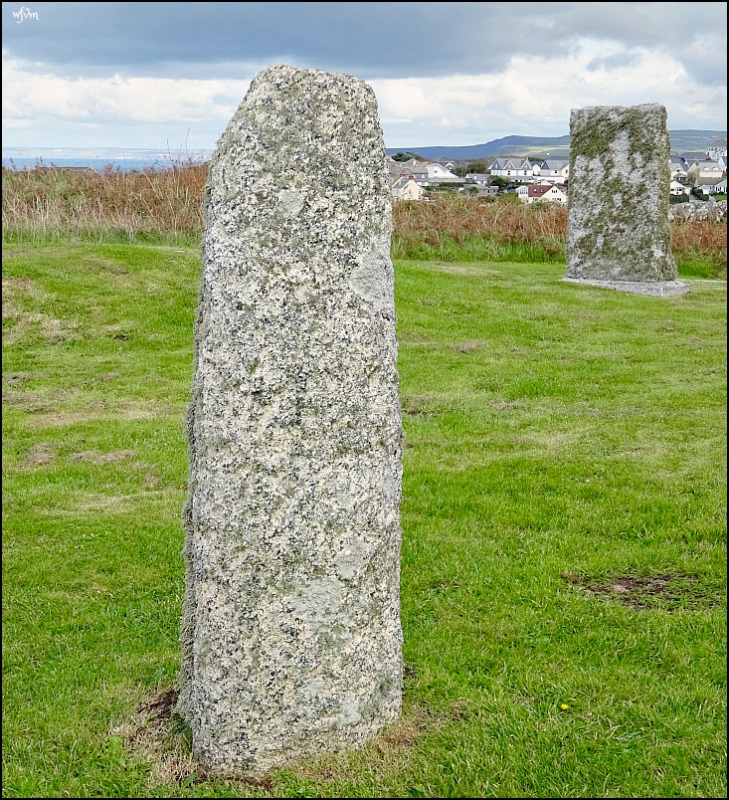 A Bronze-age Monolith sits amongst the grave stones revealing a long history of human habitation in and around this area. 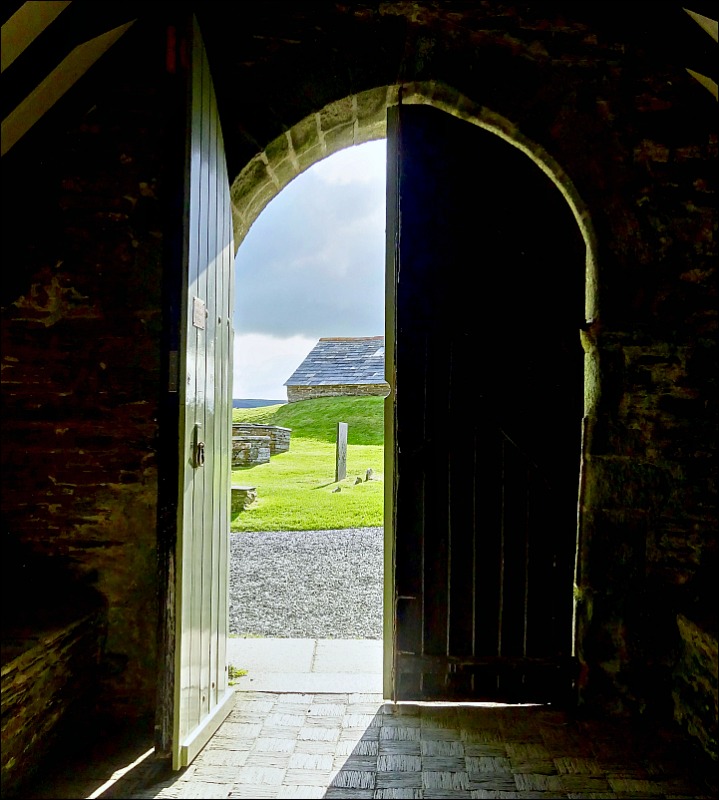 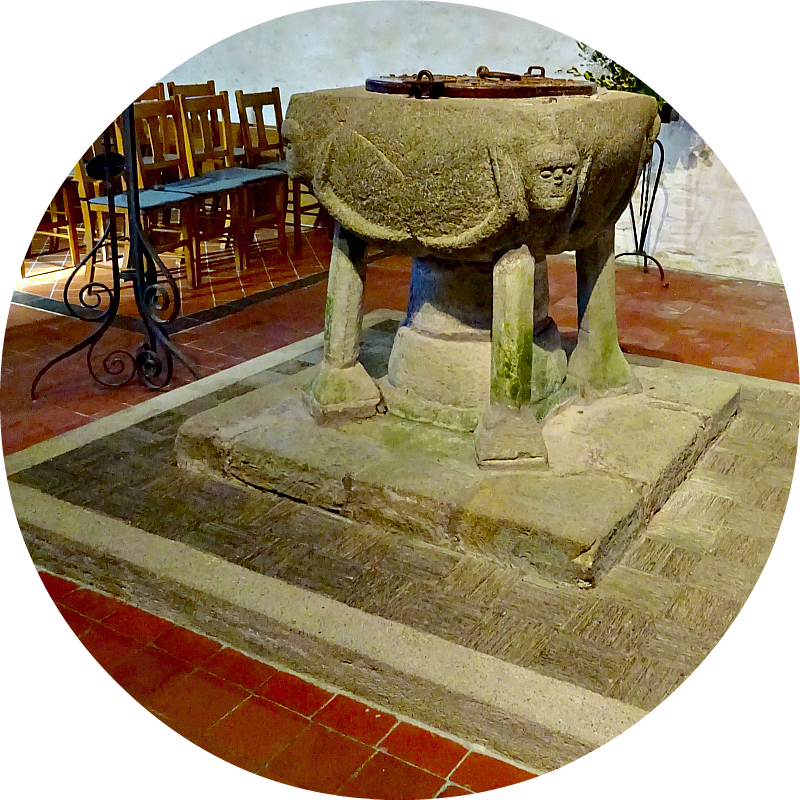 Inside the church is a very large fine Norman font with four grotesque heads at each corner; having been carved more than 900 years ago, the lost details in the faces have now taken on a more benign appearance. Each head is linked by a serpent with their heads and tails curved upwards representing evil spirits expelled by grace. 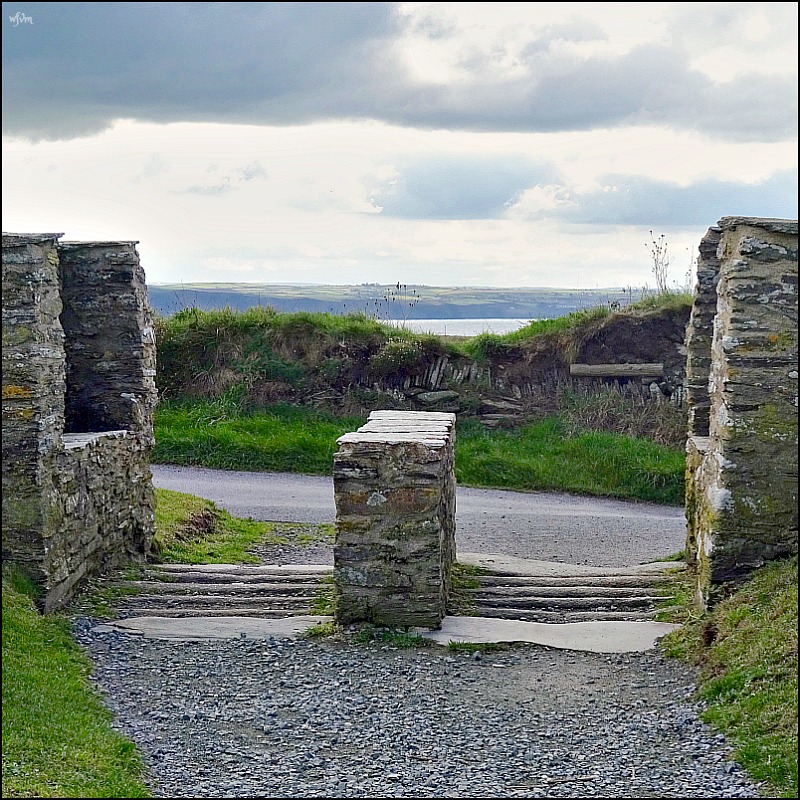 This is a lonely, and remote clifftop spot, but can you picture how it might look on a wild, stormy, mid-winter day, with the ancient church and tomb stones swathed in a swirling fret blown in from the Atlantic! It would be very easy to imagine the presence of those mythological knights who are said to have walked this land during ancient times.
Now, however, it is time for us to depart and walk back down to Tintagel and view our final destination. 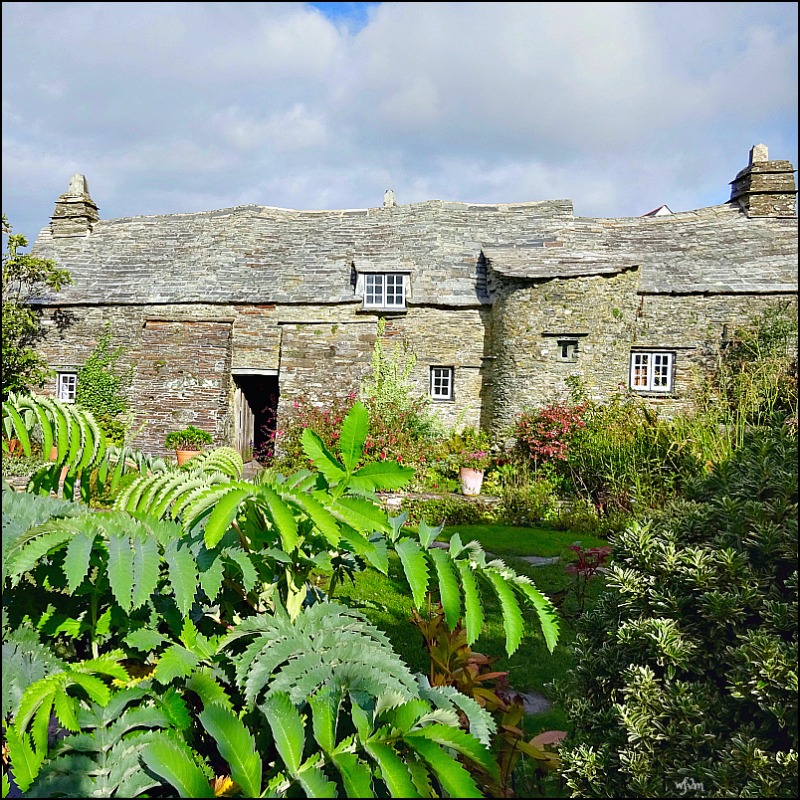 We have come to see this medieval stone building which is a rare survival of a Cornish hall-house dating back to 1380. For most of its life it was used as a domestic property for a yeoman, but during the Victorian era it was used for a number of different businesses, finally ending its days as a 'letter receiving station'; an early fore-runner to a post office. 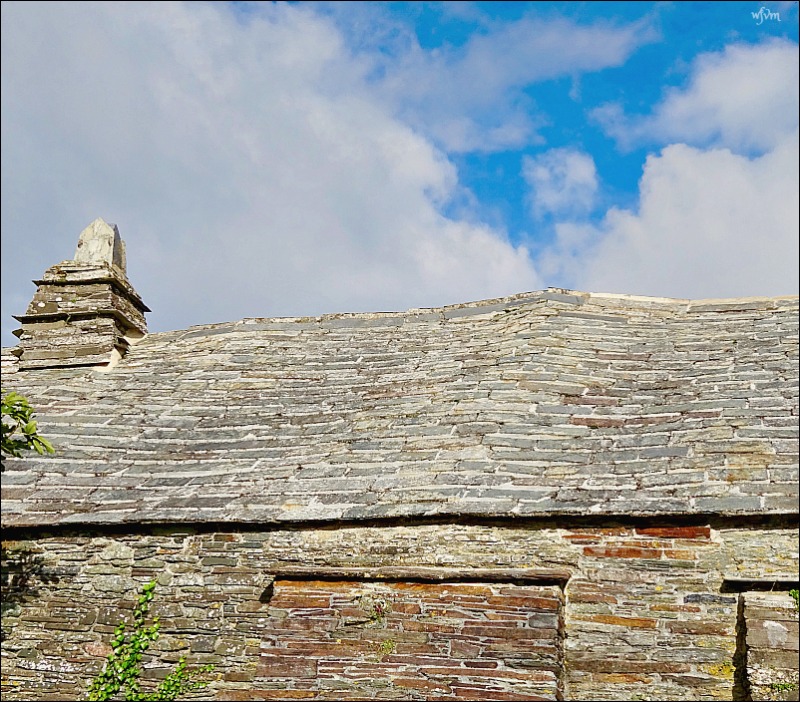 The buildings very distinctive undulating roof of slate tiles has a profile resembling the waves seen on the nearby ocean.  Having stood the test of time for almost 800 years, I imagine that it is likely that it will still be standing here for many more years to come.
Posted by Rosemary at 11:11