NORMAN CORNISH - ARTIST (todays post has been done by H, special thanks to him)

Once in a while a lecture given to our local Fine & Decorative Art Society will leave a lasting impression. None more so than a recent lecture about the art that emerged from mining communities in the North of England during a period approximating 1920-1970.
Miners, during their time-off from heavy toil underground, were encouraged to join clubs where intrinsic artistic talent could blossom.
The fruit of this unlikely artistic movement was notable in towns such as Ashington in Northumberland and Spennymore in County Durham.
From the bleak hardship of colliery life sprang the warm comradeship and social cohesion of mining communities. Pubs and workingmen’s clubs provided the social setting in which miners could find not only temporary relief from their toil but also exchange views, for example, on wages and working conditions. Silver and brass bands, parades and galas were ubiquitous expressions of powerful solidarity amongst mining communities.
This was the rich social landscape that provided a ready source of inspiration for budding artists.
Needless to say, the unique physical landscape created by coal mining was also a source of inspiration. The winding gear, mountains of mine-waste, railway sidings, trucks and locomotives, pedestrian walkways, footbridges and tunnels, was the real-life background to a now largely bygone era.

By good fortune our lecturer, Robert McManners, brought with him several copies of a book he jointly authored with Gillian Wales in 2009 entitled “The Quintessential Cornish”. I was lucky to procure the last of these, so popular and appreciated was the subject matter.
The book is a biography of Norman Cornish, perhaps the most outstanding of all the artists of this genre, now almost ninety years of age and much honoured in his lifetime.
The most productive, and for me deeply moving, period of his artistic life was the thirty years during which he combined art with his work underground as a coalminer. He was a bright pupil and won a place at Grammar School. Family needs, however, took priority and he joined his father in the pit at the tender age of fourteen. An opportunity later arose for Norman to attend Art School, but the miners’ welfare society decided that its rules forbade such sponsorship, and the place went unfilled. Norman, whose pictures now change hands for many thousands of pounds and hang in prestigious galleries, is self-educated.
Norman Cornish has never lived in any place other than Spennymoor, Co Durham. His sketches, pastels and paintings are drawn entirely from the closed world of this intensely mining community. His work, for me, is extremely moving.
My own personal concerns gravitate towards those at the bottom end of the social order, for whom sustaining the most basic living standard is a constant struggle. This may explain why, more than anything, I am stirred emotionally by music emanating from communities whose survival is a constant battle against social deprivation and physical hardship. I just love the plaintive sound of brass band music and male voice choirs from mill and mining towns in the North of England, and Wales.
The social-realism of Norman Cornish’s art has stirred similar emotions.
A big “Thank You” to the authors of this marvellous book and to Norman Cornish for his life work. 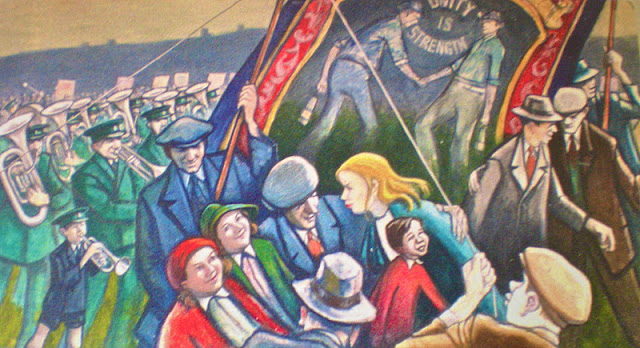 Gala Day
front and back book cover
'I paint human beings. I paint their hopes and their shapes and their attitudes and the feelings I have when I look at them. The images come from the people. They create them. I am just the medium'.
Norman Stansfield Cornish.
Further post done by H here
Posted by Rosemary at 00:00

Email ThisBlogThis!Share to TwitterShare to FacebookShare to Pinterest
Labels: Art