Two Orthodox Monasteries and the symbolism of the Hand of God in paintings. This links in with previous posts - Signs, Symbols, and Meanings in Art No. (4) 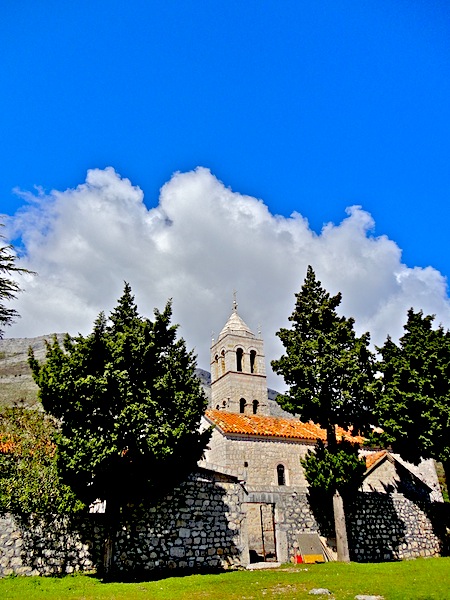 Rezevici Monastery - the first small church here was consecrated in 1223
This monastery is situated on a beautiful hillside along the Adriatic Coast near Pastrovic. Throughout its long history it has often been robbed and destroyed, especially by the Turkish army in 1705. The frescoes in Orthodox churches are very distinctive and tend to be painted in bold, strong colours. 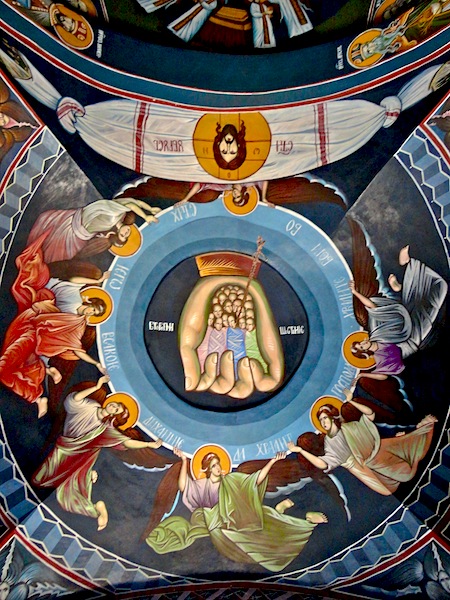 The monastery ceiling has this enormous hand painted on it holding a handful of babies. However, on closer inspection they look like little old men, but that is probably just the way they have been painted. They are wrapped in swaddling clothes, which must represent the biggest clue. Swaddling clothes in art are viewed as an attribute of the incarnation, and as a symbol of the Christ Childs humanity. There seems to be a cord going down to the central baby wrapped in blue. Blue symbolises heavenly grace. The Virgin Mary is usually depicted wearing blue clothing. Blue also represents hope.
My own interpretation of it is as follows, but I would be very happy to receive further thoughts if you have any.
References to the hand of God are numerous in the Old Testament. A hand in painting often represents God the Father, because of an implicit prohibition on depicting his head: "Thou canst not see my face; for no man shall see me and live". God's hand can be seen in paintings releasing the dove at the Annunciation of the Virgin. A hand paying Judas the 30 pieces of silver or holding a bag of coins denotes the betrayal of Christ.  A hand also became an Instrument of Passion owing to the scene in which Christ's face was slapped during his mockery; this incident is shown in a fresco by Fra Angelico.

Fra Angelico's Mocking of Christ in San Marco, Florence. Note all of the hands depicted in the fresco are right hands. 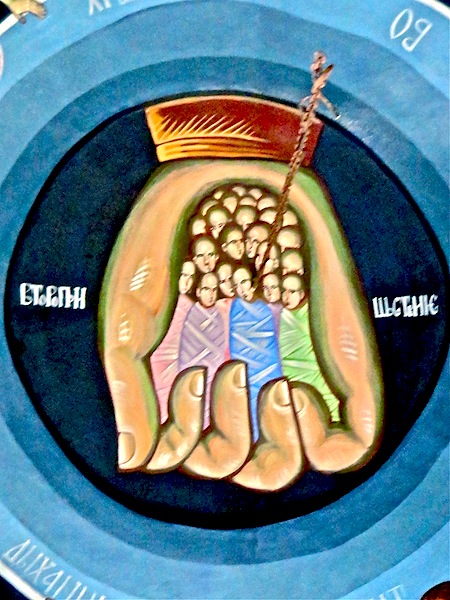 I have taken a close up detail, excuse the fact that it is not very sharp
The hand painted on the monastery ceiling is also the right hand. The right hand is considered powerful, the left hand weak. The cord going to the central baby, wrapped in blue swaddling clothes, I believe must be the Christ child. The cord seems to be anchored by a hook to one of the blue circles which I feel represents Heaven. One of my blog friends Mark has suggested that as more than one baby is included, he would guess that that signifies all of mankind, which I agree with. Following Mark's comment I took another look at the painting I noticed that the angels are, in fact, holding up the blue circles, confirming to me that the circles do represent Heaven. 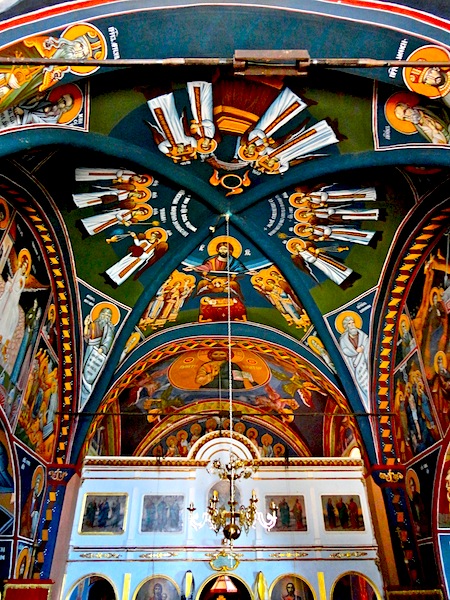 The east altar wall has a rood screen with arched entrances only accessible to men. 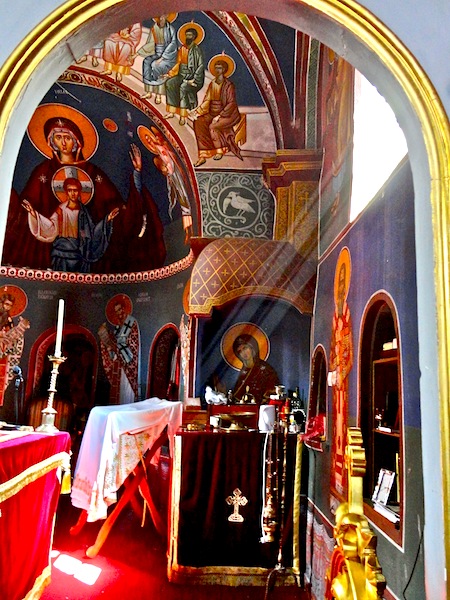 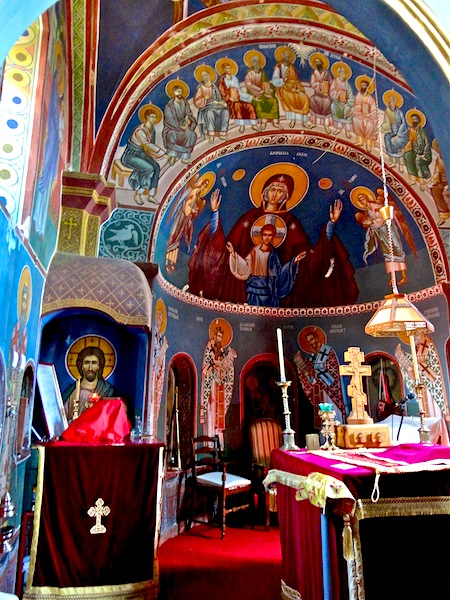 The view from the other arched entrance to the altar. 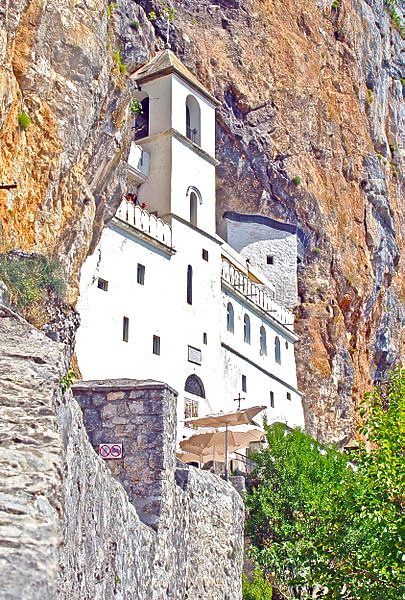 Ostrog Monastery - 1605
The visit to this second monastery took us on a long winding very steep climb up into the mountains. The monastery is built into the caves near the summit of the mountain and is dedicated to Saint Basil its founder. There are two churches an upper church dedicated to the story of the The True Cross in one small cave, and the lower church where the body of St. Basil lies. It is a popular place of pilgrimage and many travel there hoping for a miracle or cure by touching St. Basil's body. The body is enshrined in an open reliquary, which is kept in the smallest cave church. The monastery is of national significance to the people of Montenegro, and has a rich history and many legendary tales associated with it. 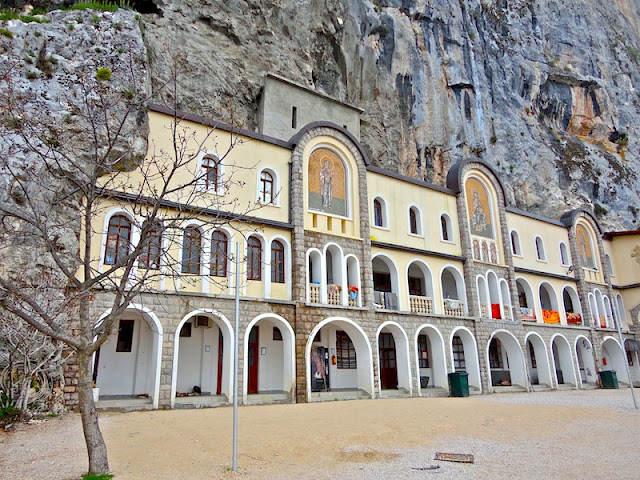 This is a refuge for the monastery. Apparently you can come here and stay for as long as you like. 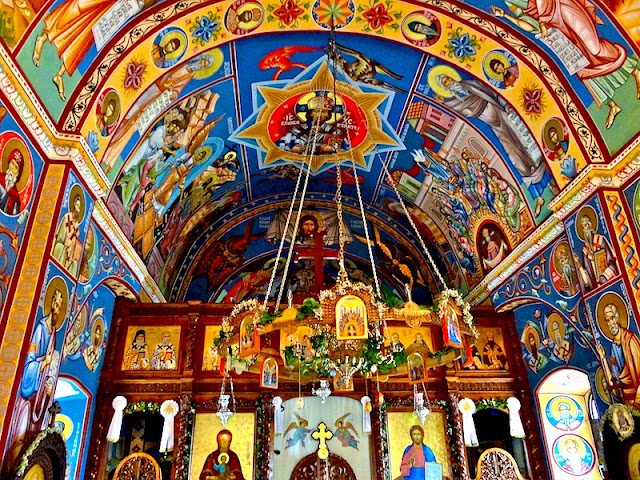 Halfway down the mountain is a new church dating from the 19th century. This is where ceremonies are carried out, such as weddings and baptisms, as the monastery itself is too small. 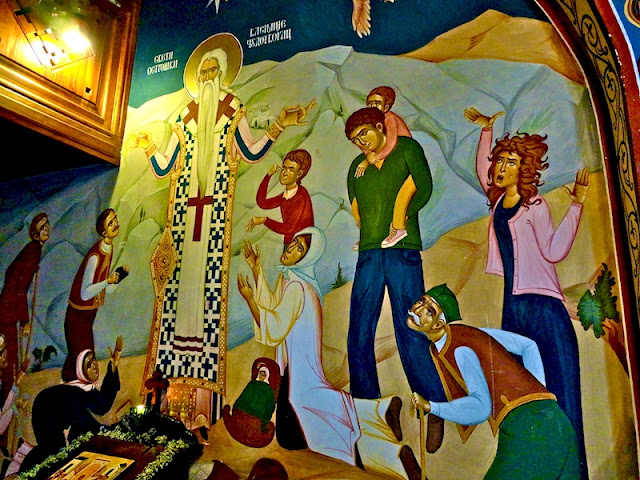 Wall fresco of St. Basil shown curing people of all nationalities, all faiths - Orthodox, Catholic, Muslim, and with all kinds of sickness.
Previous posts on Signs, Symbols and Meanings in Art
No. 1, No. 2, No. 3
Posted by Rosemary at 09:52