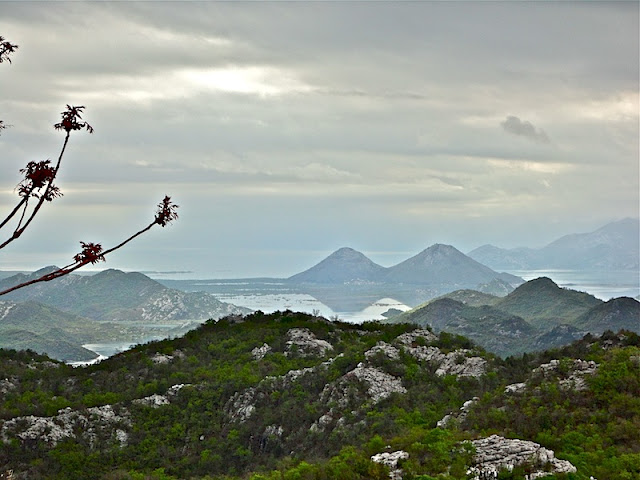 View to Skadar Lake - 44 kilometres long and 14 kilometres wide. The Balkans largest lake which Montenegro shares with Albania.
Montenegro sits at the far southern point of what was Yugoslavia. It is a tiny country with just over half a million inhabitants. Our impression was that they are a struggling economy, and several locals voiced the view that in retrospect life under Tito was better. They are in the euro, unlike their neighbours Croatia. From our visit to Croatia, we feel that Croatia is more prosperous.
Tito was an authoritarian leader, but Yugoslavia was an economically successful country from which all Yugoslavians benefited.
The Montenegrin male is born "tired", and spends his life recovering!!! They are perfectly happy for Serbians and Croatians to come to their country and do the work. This information was given to us by a local Historian. Most Montenegrin's are Orthodox Christians, but resent the fact that their church is known as the Serbian Orthodox church because of the Serbians controlling influence on it. Along with the southern Croatians they are the tallest people in the Balkans, many are well over 6ft 6inches. This is in contrast to their near neighbours, the Albanian's, who are very short. 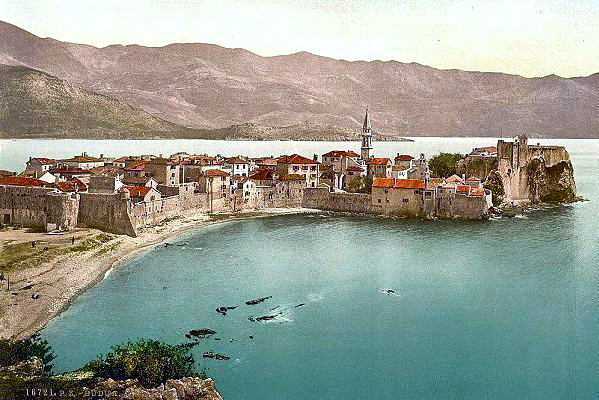 View of Budva from postcard dated 1900
via wikipedia
We stayed just outside the old town of Budva with a history spanning two and a half millennium, making it one of the oldest settlements on the Adriatic. 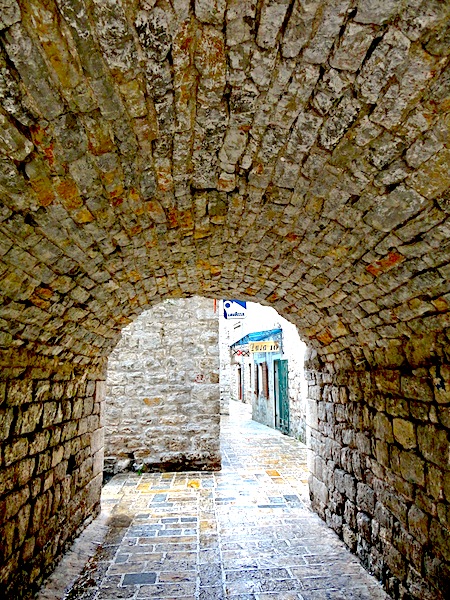 Legend tells that a banished Phoenician prince called Cadmus originally founded the city. Budva can trace it heritage back to the Bronze Age when it was a simple illyrian settlement before becoming a Greek trade centre during the classical age and then a fortified Roman town.
They suffered a devastating earthquake in 1979 which was especially destructive in Budva. However, during the rebuilding period which followed, many wonderful archaeological artifacts were discovered. 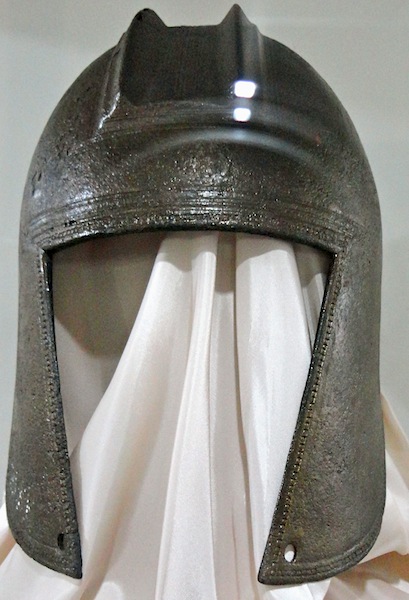 Illyrian- Greek helmet from the beginning of the 5th Century BC. 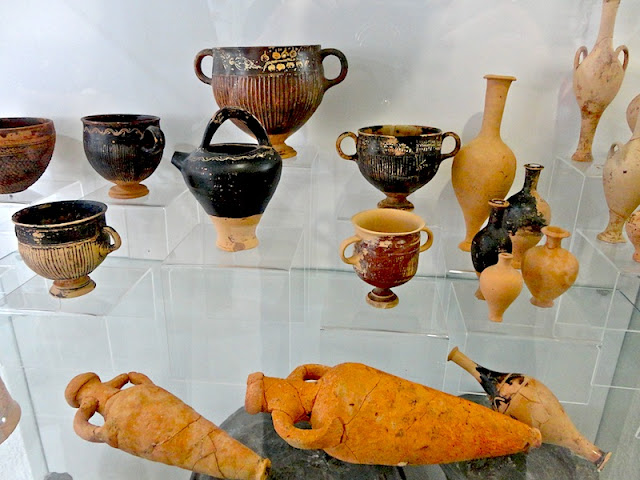 4th and 3rd century BC ceramic vessels discovered in an Hellenistic necropolis. 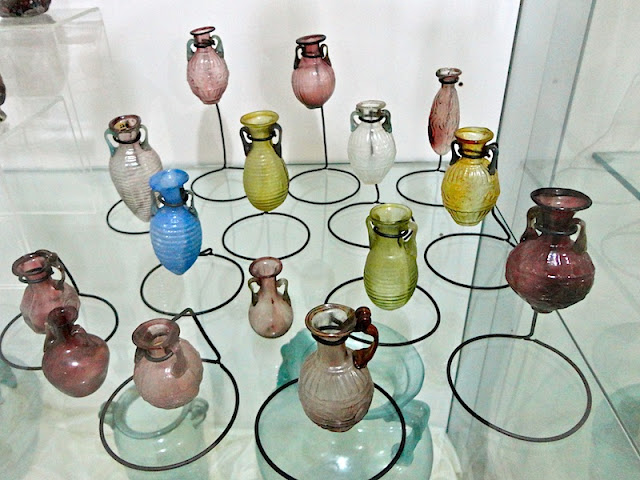 Glass vessels from the Roman period I - III century AD. 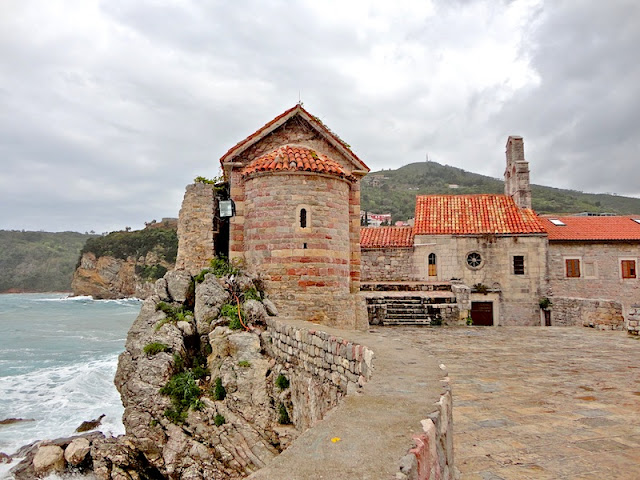 The old town of Budva is surrounded by fortified Venetian walls with four large entrance doorways. Much of the interior architecture is of Venetian design. The oldest surviving church is the one on the right of this photo said to date from AD840. The other church located on the left, and partly incorporated into the city walls is St. Sava. The apse being of Romanesque style. During Napoleon's occupation of the region, the church served as a stable. 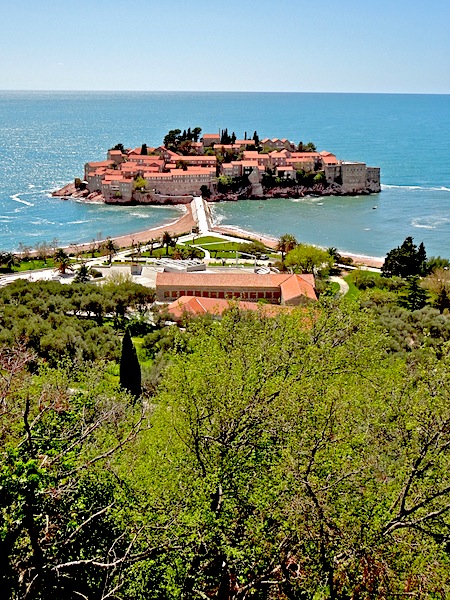 Once a small fishing village, Seveti Stefan is now one of Montenegro's most iconic sights. A popular resort for the rich and famous. The small peninsula linked by a causeway is out of bounds to the general public. 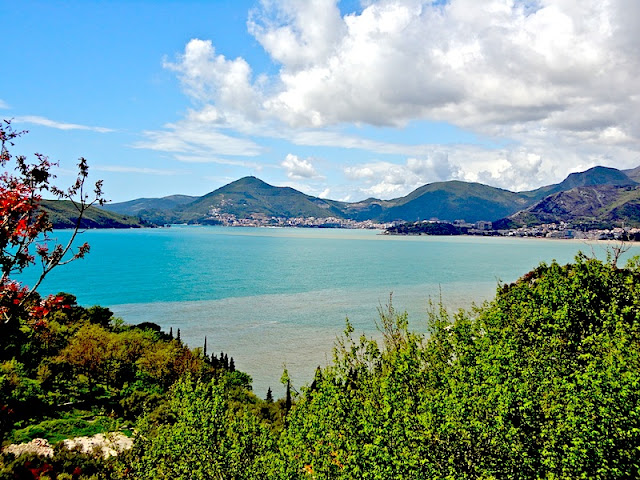 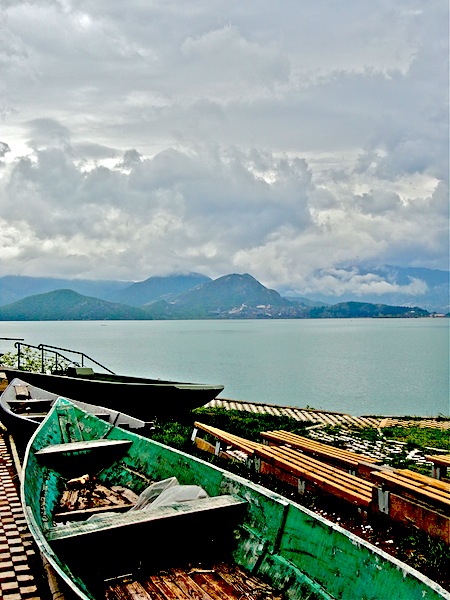 Skadar lake
We experienced some lovely weather, but also some extraordinary weather. There was a lot of rain during the first couple of days, although we were still able to make visits and avoided getting wet. However, on the second evening we had an almighty electric storm which lasted for 8 hours. One part of the hotel was flooded out, but our side remained alright. Where we had looked out on grass from our terrace window, we had a lake, which happily vanished during the day.
View from our terrace. 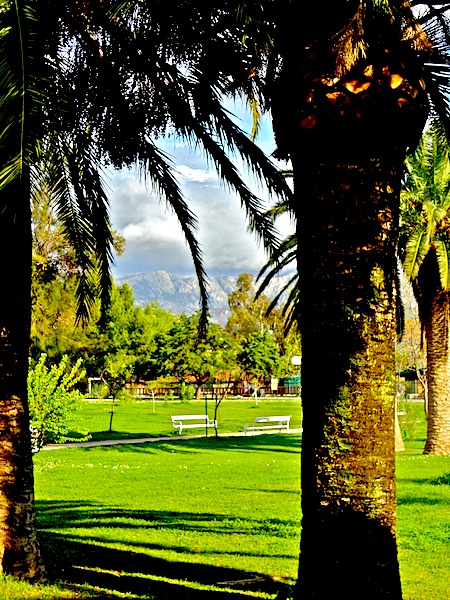 postcard wikipedia
Posted by Rosemary at 19:02