Tracing family history in England before the 16th century 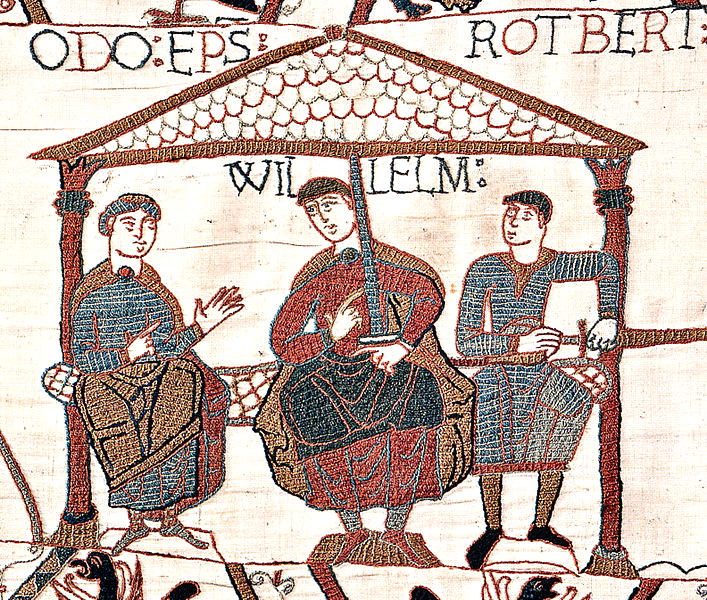 Part of the Bayeux Tapestry showing William the Conqueror in the centre with his half brothers - Odo on the left and Robert on the right.
Despite the disruption by sectarian strife, civil war and industrialisation of the past five hundred years, people living in rural England were generally rooted in their communities and family records can be traced through many generations. Parish records of baptisms, marriages and deaths commencing around 1530 have greatly facilitated this. The male line of my own family appears in parish registers over this period, although with large families and the not infrequent practice of baptising children with the same first name, it can be difficult to establish a direct line of succession.
The above information about my own ancestors is supplemented through the family having been lords of the manor in Betchworth; the proceedings of manorial courts conducted there being held in Surrey county records. The manor passed from my family in 1646, perhaps as a consequence of the Civil War.
There are other clues in the village of Betchworth providing evidence of the family's presence in earlier times. The family name (preceded by the suffix 'de' appears in a list displayed in the church as Vicar of Betchworth in 1347. Coincidentally the vicar had the same first name as myself. 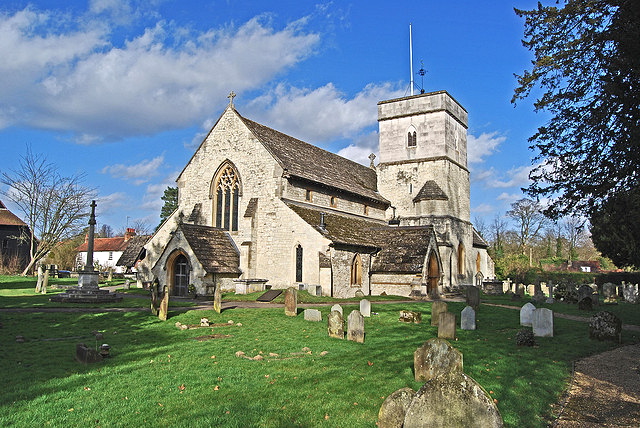 Farmers bearing the family name were subsequently prominent across the meadows at Newdigate, and we believe this may be connected with losing the manor. 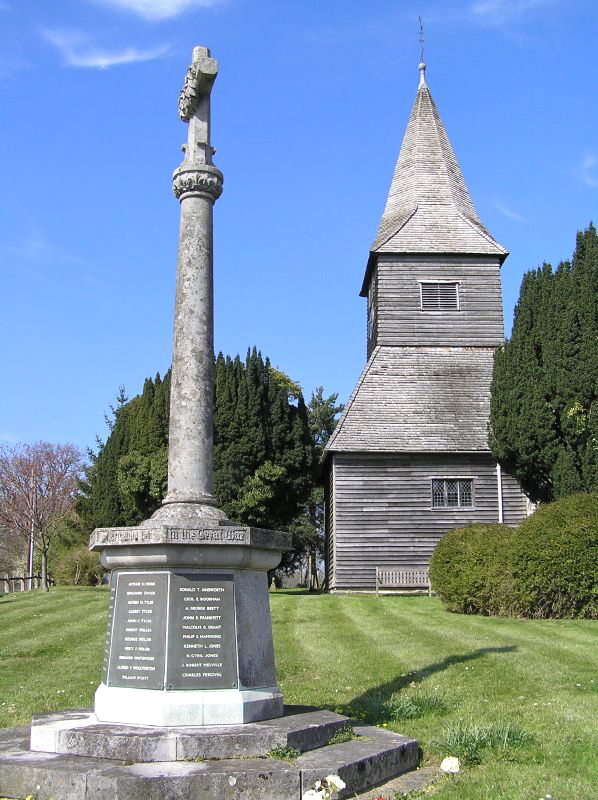 via
St. Peter's Church, Newdigate - the oak timber framed tower, which houses six bells, has been dated by dendrochronology to 1525
On visiting Newdigate church we discovered that in 1780 a family member was a church warden and Overseer of the Poor - a role linked to the Poor Law. His memory is perpetuated by his name being engraved on a bell installed in the church tower commemorating his time in office. 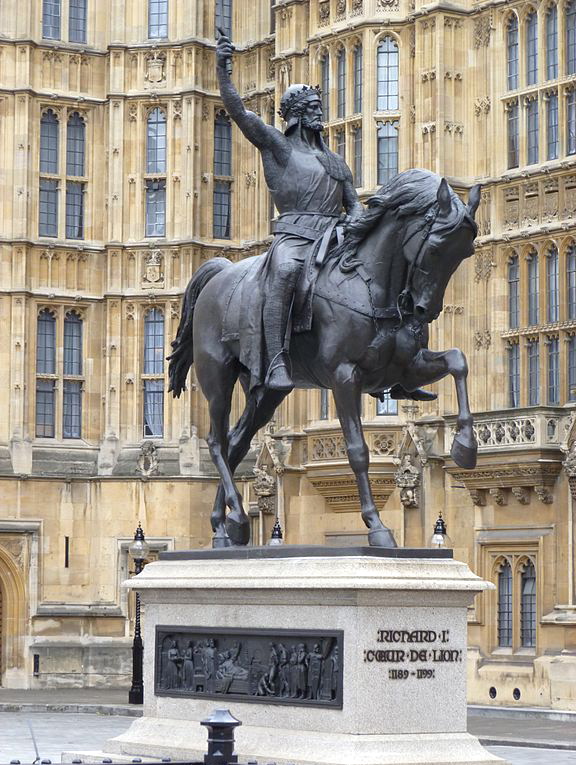 King Richard l - the Lion Heart - statue outside the Houses of Parliament, Westminster, London
In 1198 the family was awarded a charter by King Richard l - Richard the Lion Heart - to establish a mill on the river Mole in that village. This was one year before the King's death in 1199. The mill, which continues in operation to this day, still bears the family name as does the manor referred to above.
So there is evidence that the family resided in the village before the year 1200. But what can we surmise about the history of the family in the generations preceding that date?
In endeavouring to assimilate the historical context I have been working my way through a set of volumes published by The Folio Society on The History of England, and am presently reading M.T.Clanchy's "Early Medieval England". The second half of this book is entitled "The written word in the middle ages" in which the author details the growth of written records and literacy in the two hundred years following the Norman invasion in 1066.
An understanding as to the languages in common use in post invasion England is fundamental to consideration of the written word. In the pre-1066 Anglo Saxon period the indigenous population was speaking in Early English with regional dialects in areas subjected to Danish invasion in the 10th century; but little was written down in this language. Literacy was concentrated in the Church as practised by monks, clerics and scribes, in Latin. English monks, such as Bede in Jarrow, Northumbria, had been recording history in Latin since the 7th century.
However, the Norman invaders spoke French which, of course, became the language of the governing class. King William l - William the Conqueror - divided up the land between his knights, most of whom were illiterate. Charters, writs, title deeds, etc. were prepared by scribes in Latin on their behalf. The best known of these is the Domesday Book, a record of the laws and holdings of land, its inhabitants and their livestock throughout England after the invasion. This was the result of the King's wish "to bring the conquered people under written law" i.e. a transition from memory to written records. 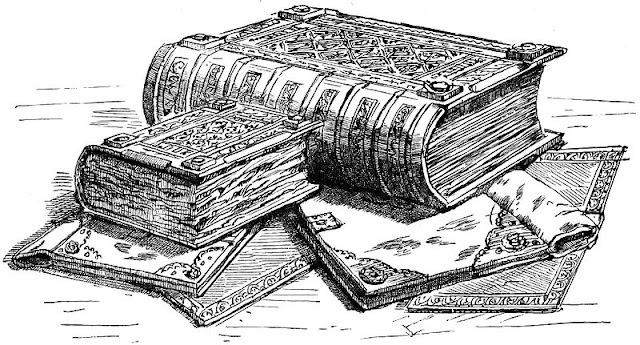 Domesday Book
Despite this milestone in record keeping, according to Clanchy the Domesday Book was for two hundred years made little use of. Taxation and expenditure records and other important documents were moved in chests to wherever the royal court was located. Other records were dispersed around the kingdom, mainly in religious foundations such as abbeys and cathedrals. Although many thousands of charters and writs were issued, for nearly one hundred and fifty years after the invasion no central archive and bureaucracy, as we know it, had evolved. 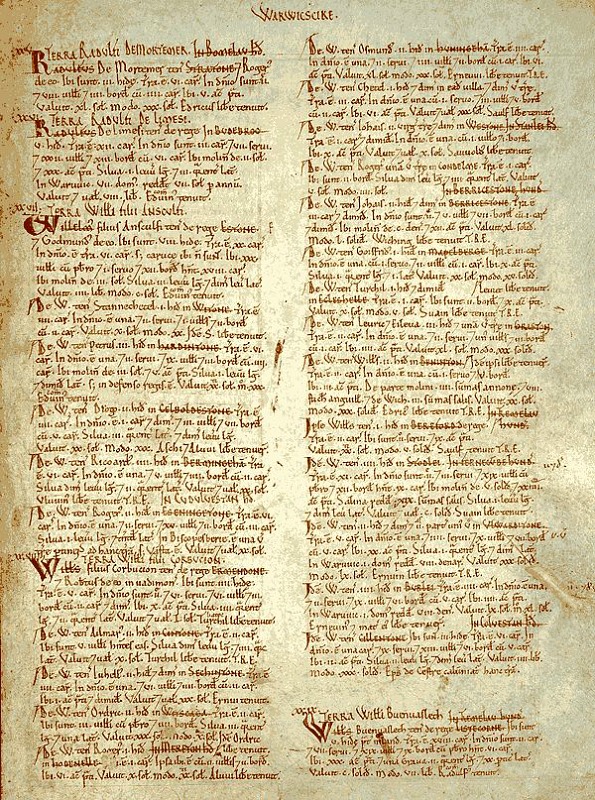 Page from the Domesday Book showing records relating to the county of Warwickshire
My conclusion from this? The "de" affixed to my family name suggests to me, in view of their local prominence in Surrey during the 13th to 16th centuries, that my ancestors might have been a part of the Norman invasion. The slow growth of efficient record keeping until around 1200 renders it impossible to trace family history preceding this date. The granting of a charter to mill on the river Mole in 1198 is therefore likely to be the earliest written evidence of my family's history.
Note: I am indebted to my eldest son for his research into the male line back to the 16th century.

all images via wikipedia except where stated
Posted by Rosemary at 07:32