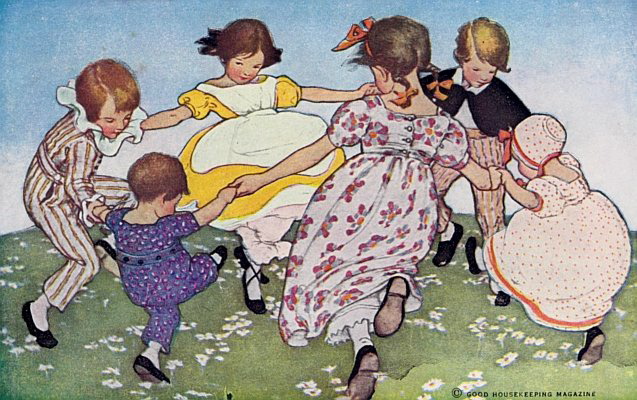 via
illustration by Jessie Wilcox-Smith 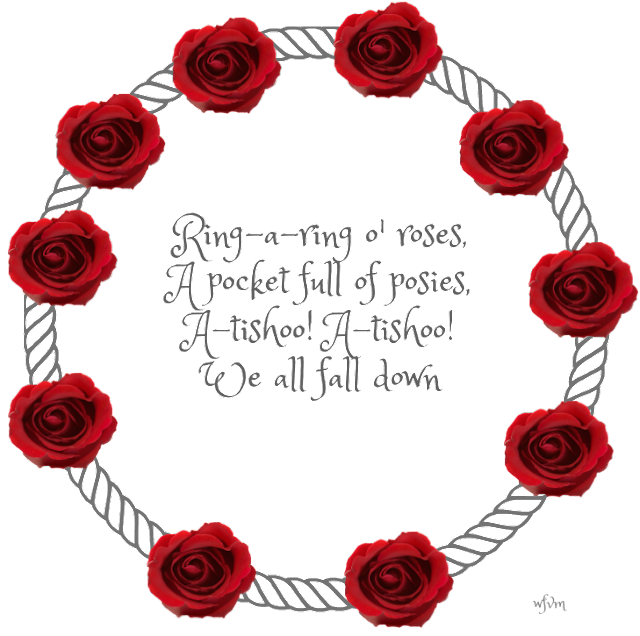 As a small child you probably danced around to this nursery rhyme ending up in a heap of laughter at the end when you all fell down.
However, there is a much more sinister tale connected with this childish rhyme which I was reminded of when visiting childhood haunts in Derbyshire last week.
The ring of roses is alleged to be symbolic of a rosy skin rash which turned purple, a plague symptom in England during 1665. The posies were herbs and flowers carried as a protection and to ward off the smell of the disease. Sneezing or coughing was a final fatal symptom, and 'all fall down' - death!!! 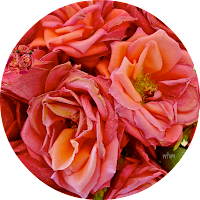 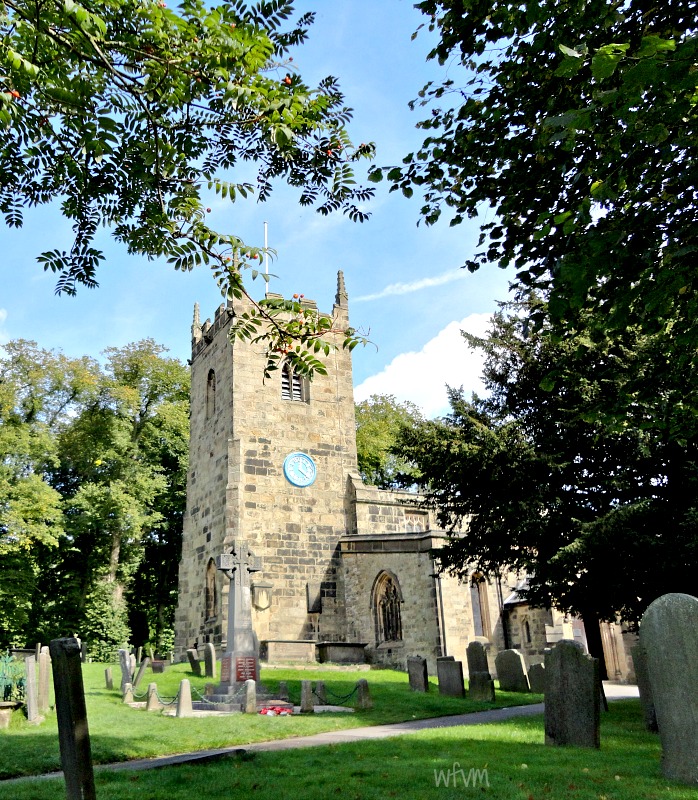 Eyam - a village in the Peak District of Derbyshire.
The village of Eyam has drawn visitors for centuries. Situated in magnificent scenery it has both a grim and heroic story to tell. A contemporary window in the church of St. Lawrence tells the story. 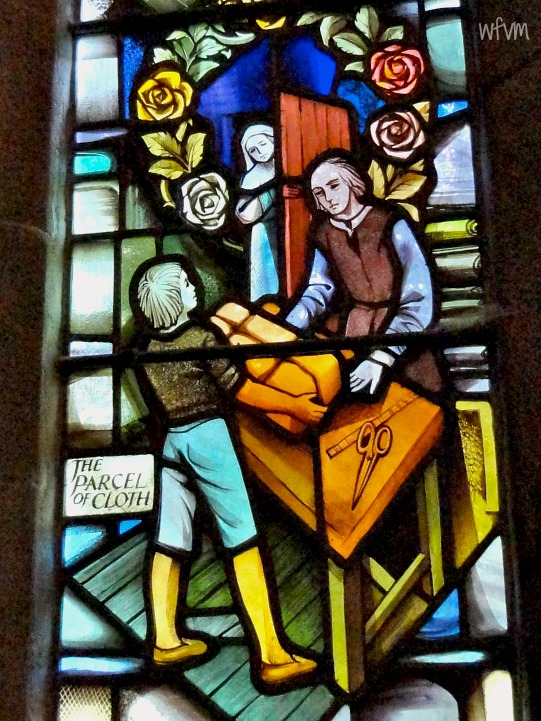 In 1665, clothes arrived in the village from a London tailor which were infested with flea larvae responsible for spreading the plague. 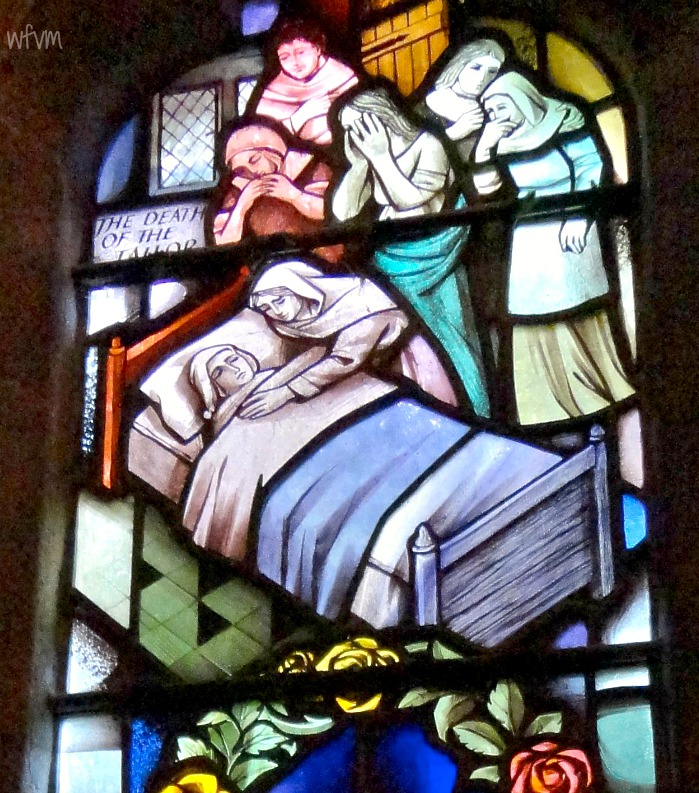 After the first deaths, amongst them the tailor, the inclination of the population was to flee, but the young rector, William Mompesson, won the villagers' agreement that nobody should leave until the infection passed. This was in order to protect Derbyshire's population, and ultimately the rest of the country. 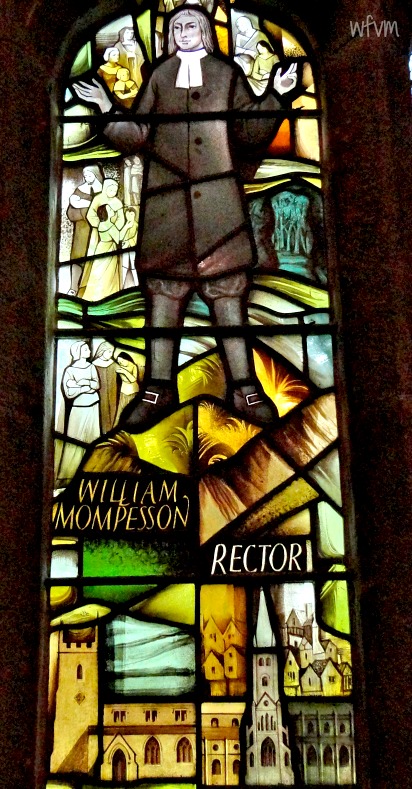 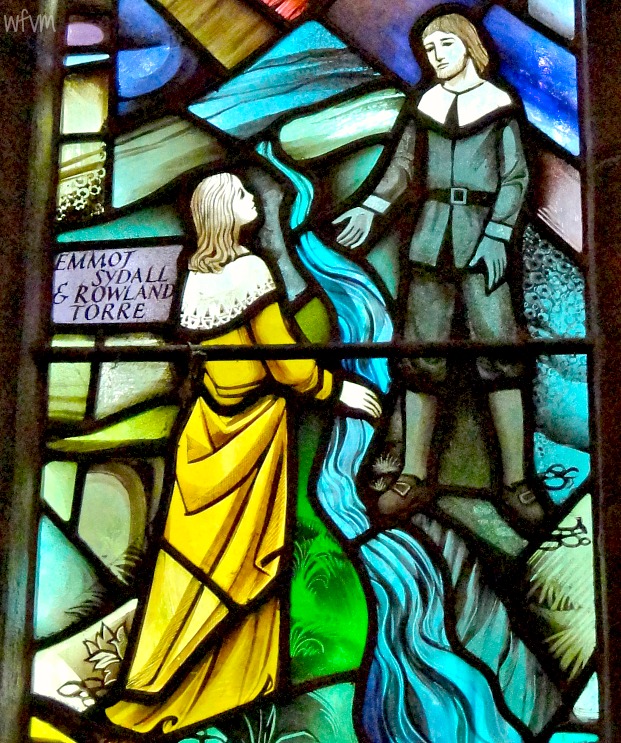 Emmott Sydall, a young girl from Eyam, had for sometime been courting Roland Torre from Stoney Middleton, the neighbouring village. When Eyam was closed off, the sweethearts continue to meet secretly calling to each other across the river. As the months wore on, Emmott lost her father and 5 of her siblings leaving only her mother and herself. In fear, Emmott begged Roland to stay away. They were never to meet again for on the 29th April 1666 she too perished. When Roland finally was able to enter Eyam after the plague was finished, he was given the sad news. He lived to an old age but never married.

The message went out that Eyam had been turned into a quarantined fortress, with requests that food should be left for the villagers at a parish boundary stone well outside the village. 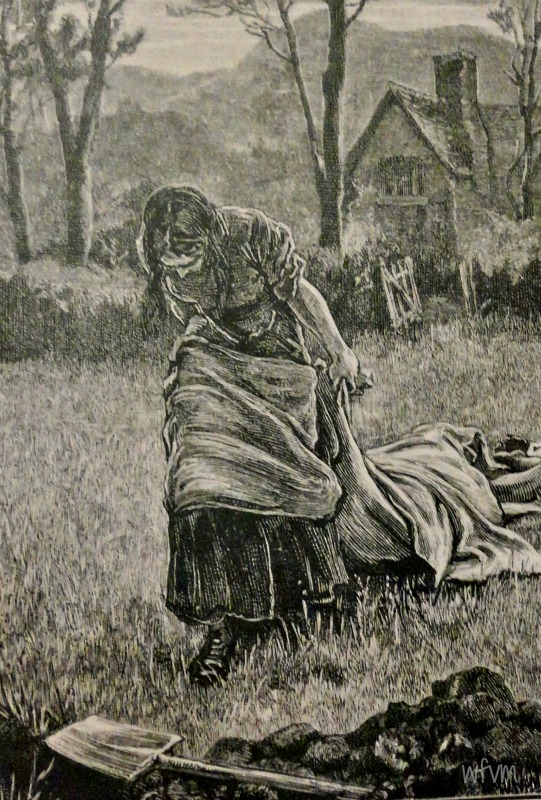 Elizabeth Hancock had the heartbreaking task of burying her husband and 6 children within 8 days. Stricken with grief, once the plague was over, she fled Eyam to seek refuge with a surviving son in Sheffield.
Most of the tombs are still near the homes and fields where they died, not in the churchyard. It was important that they were buried immediately.
The plague lasted in the village for over a year, during which time ¾ of the population perished, including Mompesson's wife. Derbyshire and also the rest of the population up and down the country was saved, and Mompesson, who survived, entered the annals of English heroism. The tomb of the vicar's wife, Catherine Mompesson, in the churchyard 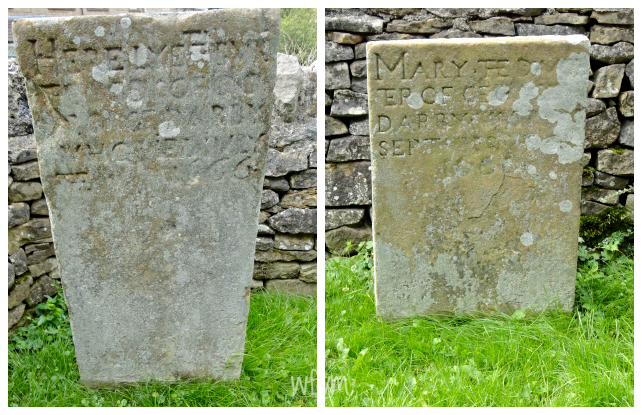 Two of many tombs to be found scattered all around the village. 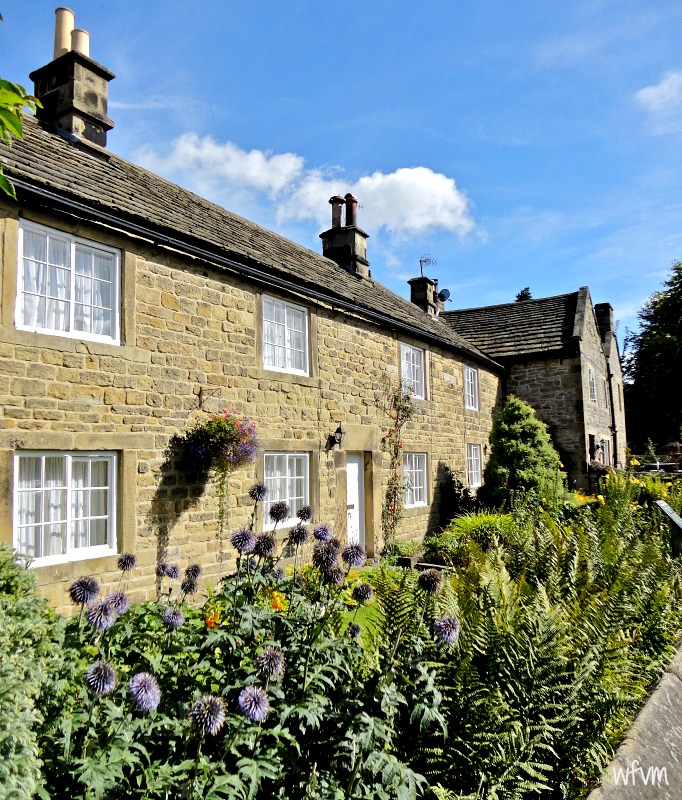 In this little row of cottages 18 people died. 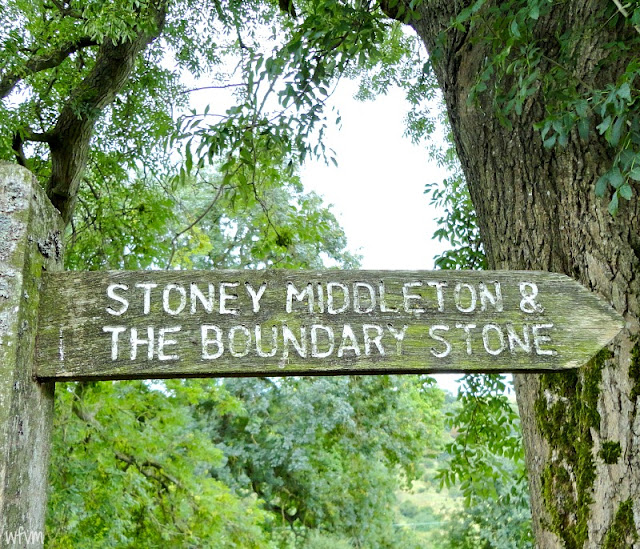 We decided to go in search of the boundary stone, and were surprised how far the villagers had to walk along terrain which must have been very difficult to negotiate during the cold and snowy winter months. 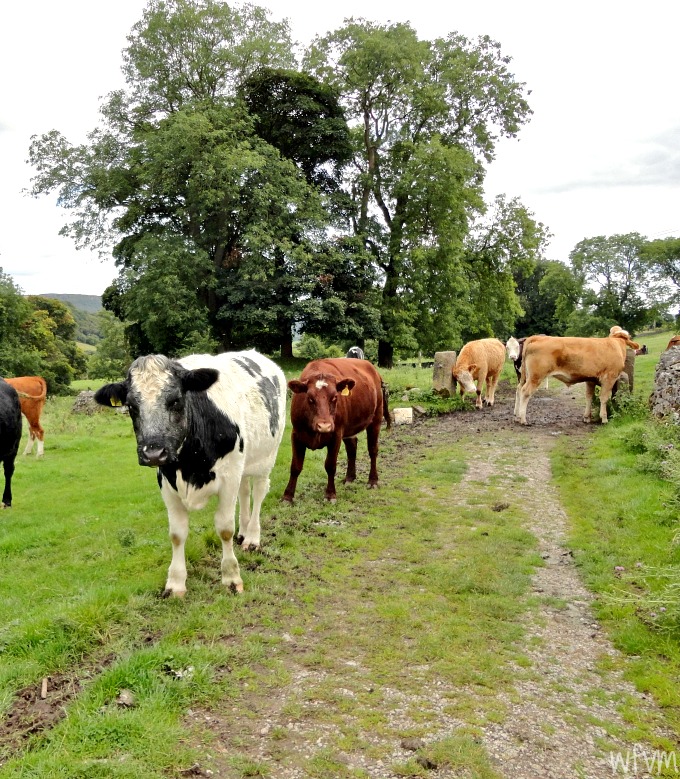 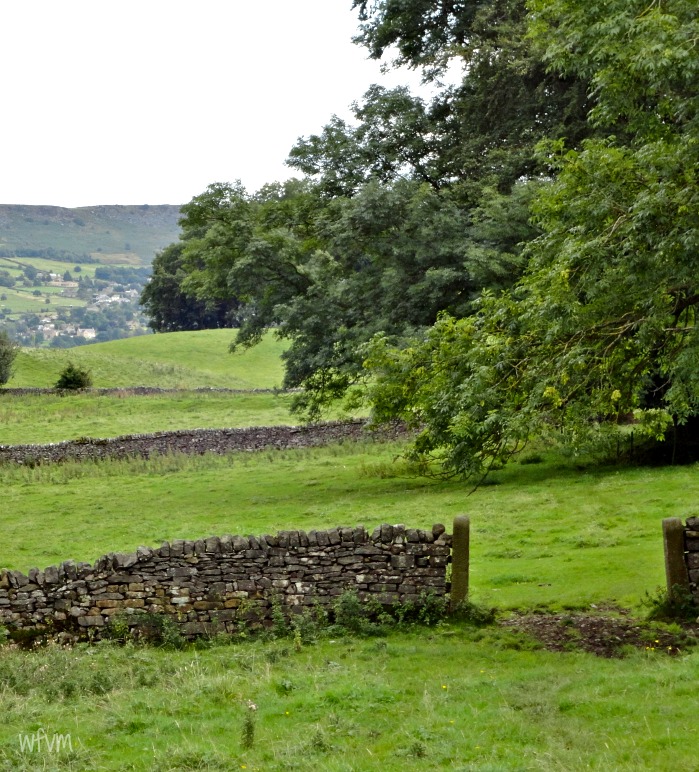 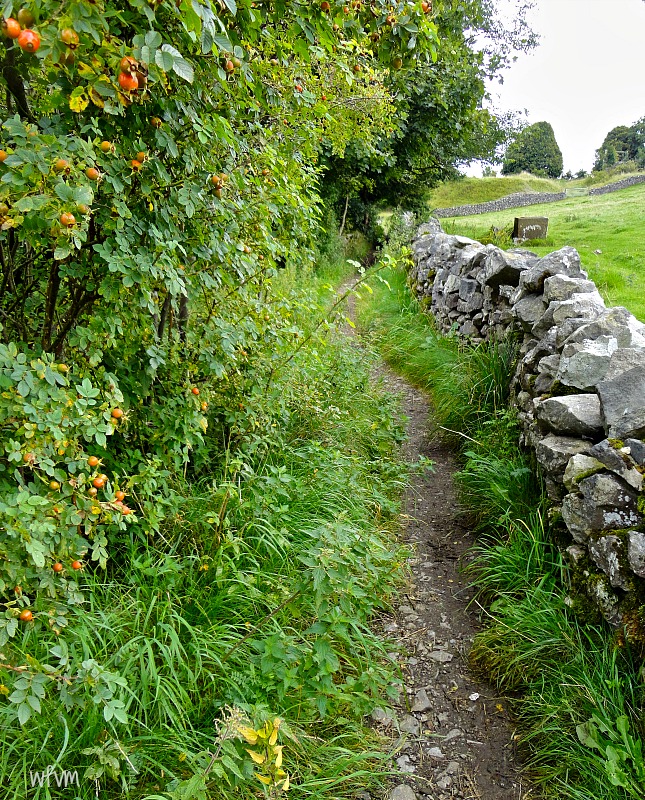 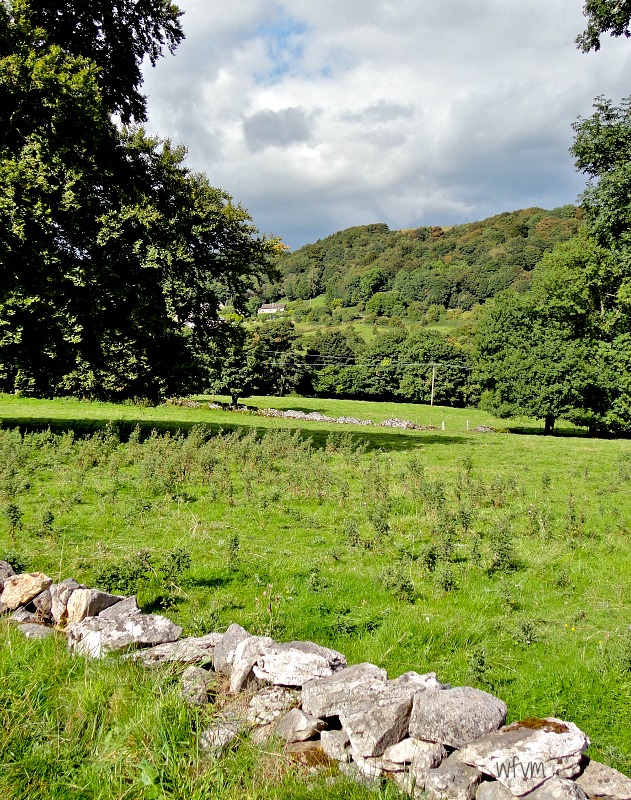 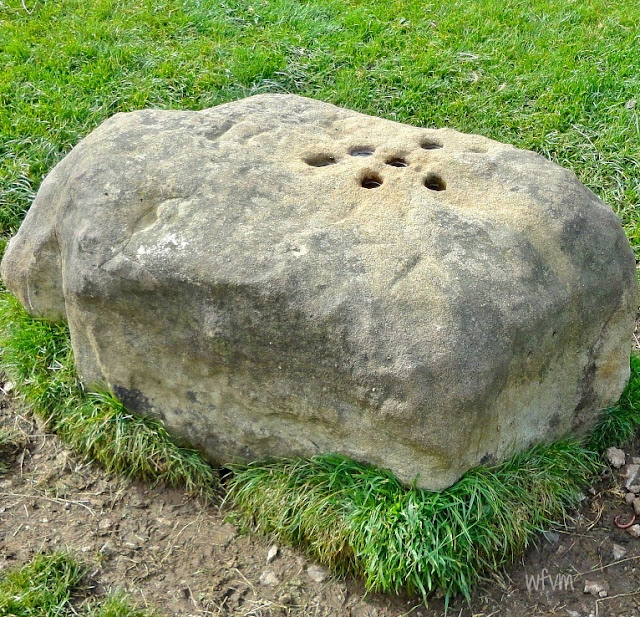 Food was left at this parish boundary stone - the villagers paid for it by placing coins in the small holes, cut into the boulder, which were filled with vinegar to disinfect the money.
A generous benefactor was the ancestor of the Duke of Devonshire, from Chatsworth House, who donated food and medicine to the village. 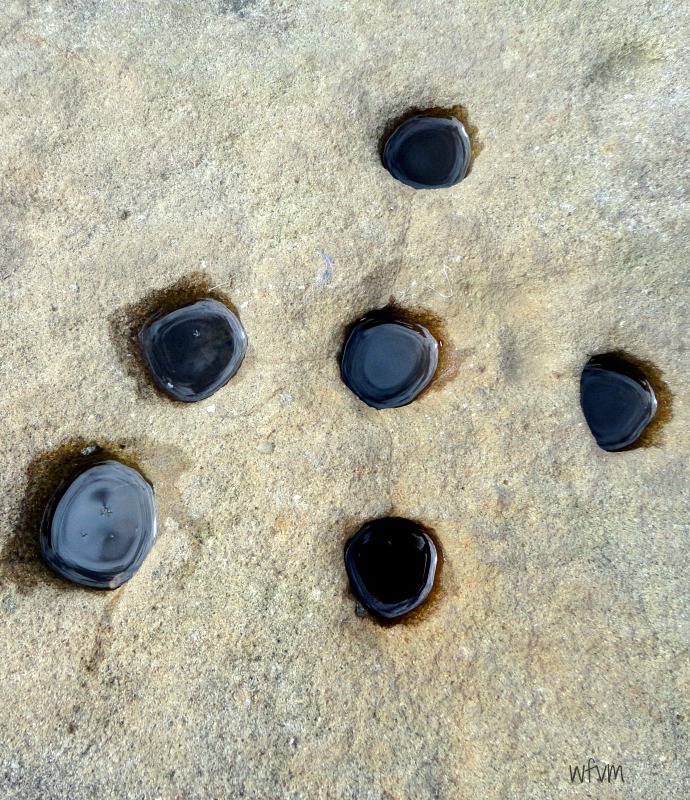 The Bubonic Plague was actually caused by a bacterium spread from rats to fleas. Apparently it has been discovered that those who survived had a chromosome which gave them protection. This same chromosome has been shown to still exist in direct descendants of those who survived the plague, and who are still living in the village at the present time.
Posted by Rosemary at 08:56