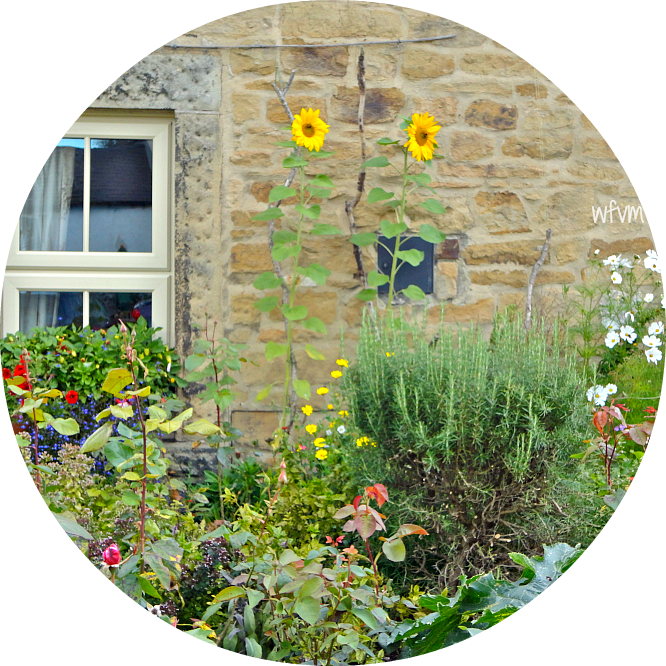 When Pondside knew that H and I were travelling to Derbyshire she wondered whether we would be visiting Haddon Hall, Bakewell or Taddington, places she had enjoyed on her trip over from Canada last year.
On our way to Eyam we did pass along the perimeter wall of Haddon Hall, and went through Bakewell. Bakewell is always a stopping point for us, it is where we buy the famous Bakewell Pudding to take home and put in our freezer. 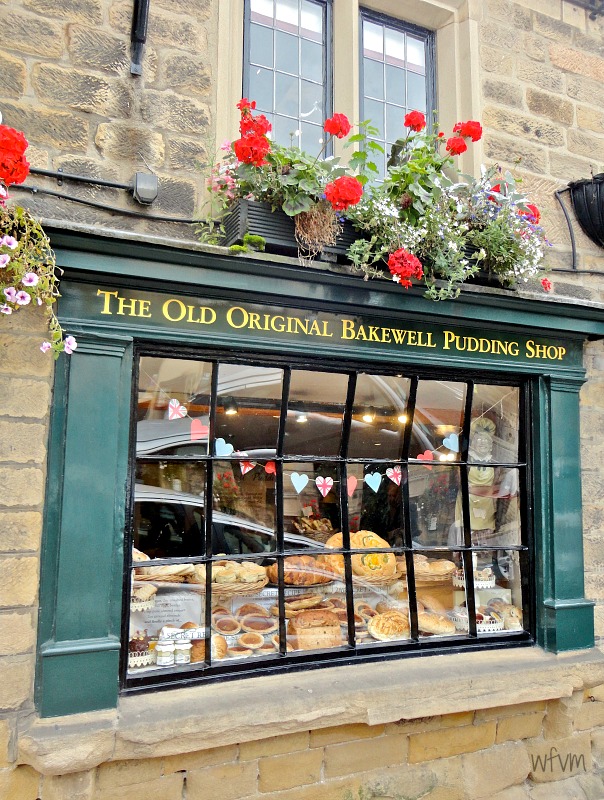 The origins of the pudding are not clear; three bakers in Bakewell claim to have the original recipe.  The accepted story is that in 1820 Mrs. Greaves, who was the landlady of the Rutland Arms, left instructions for her cook to make a jam tart. The cook instead of stirring the eggs and almond paste mixture into the pastry, spread it on top of the jam. By whatever means the pudding came about, I can guarantee that it is delicious. A Bakewell PUDDING is nothing like a Bakewell TART. 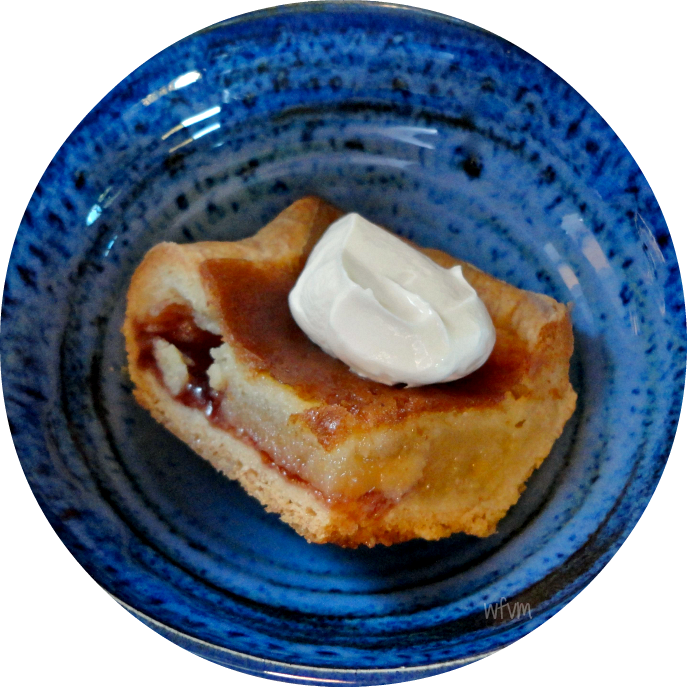 There are several treasures for the visitor to Eyam to see and visit. 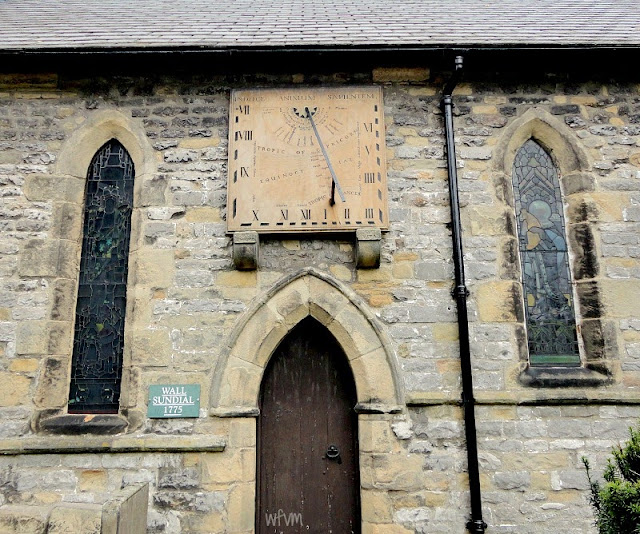 On the exterior of St. Lawrence church is this wonderful sundial dated 1775 which is thought to have been designed and made by John Whitehurst, member of the Lunar Society and clockmaker extraordinaire. 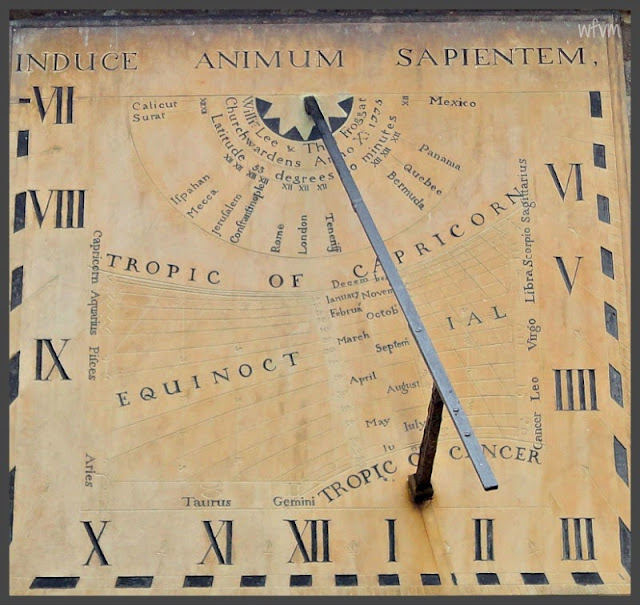 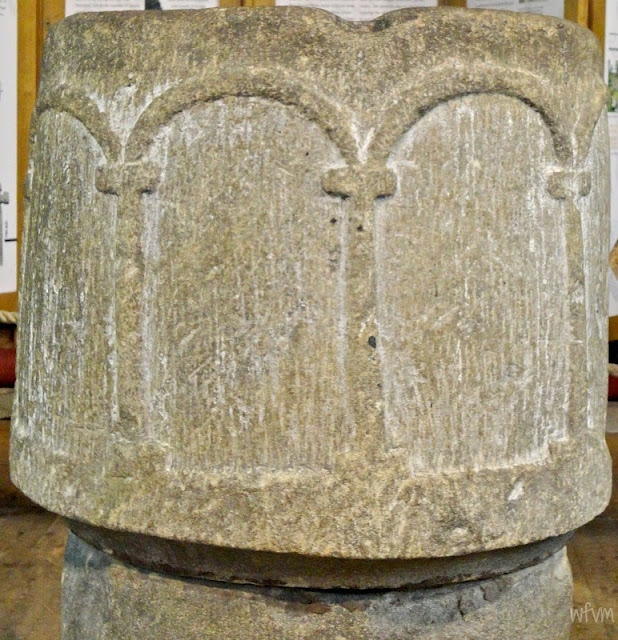 Inside the church is a rare Saxon font dating from 800AD. The arcading would have been painted and decorated. The font is not original to the church, but was given about 100 years ago. 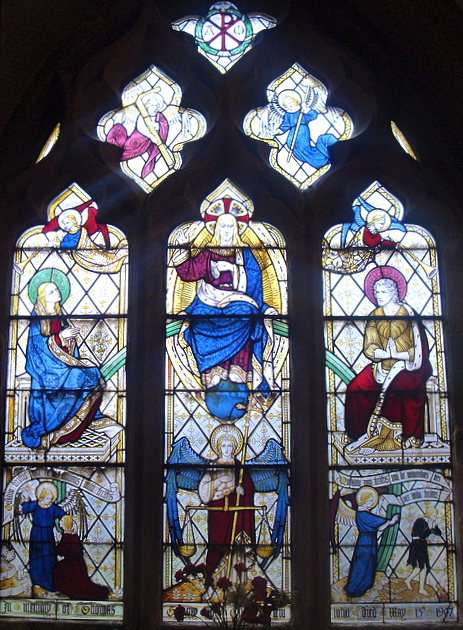 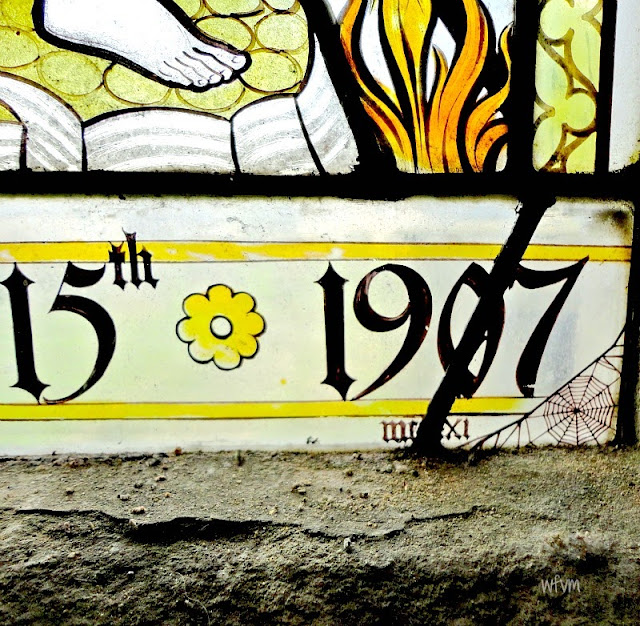 His cobweb signature is clearly visible in the bottom righthand corner.
In the churchyard sits a rare and special item which I shall do a post about in the future. 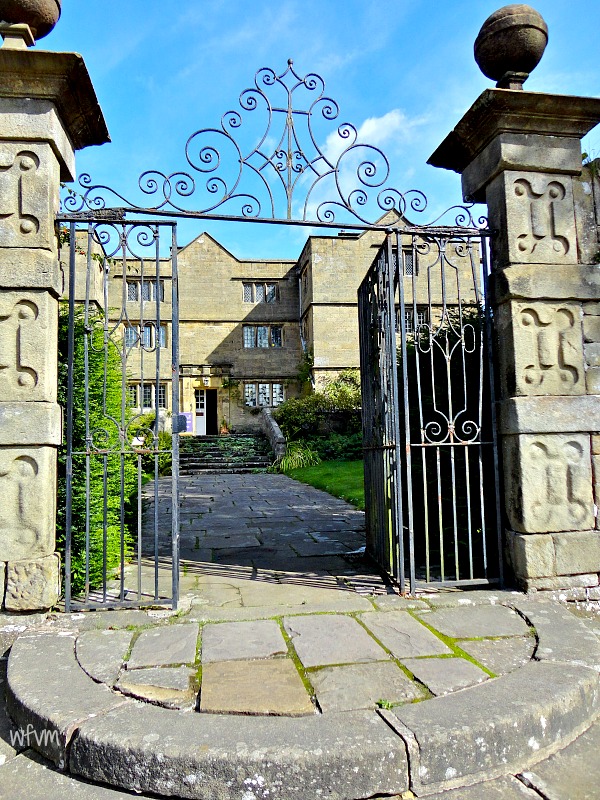 I have stood on these portal entrance steps to Eyam Hall so many times, and wondered what it was like inside the house and garden. Joy of joys we discovered that it has just been leased for 10 years to the National Trust with effect from March of this year, so armed with our membership cards, free entrance was permitted. This is the very first time that any property has been leased to the NT rather than being given. 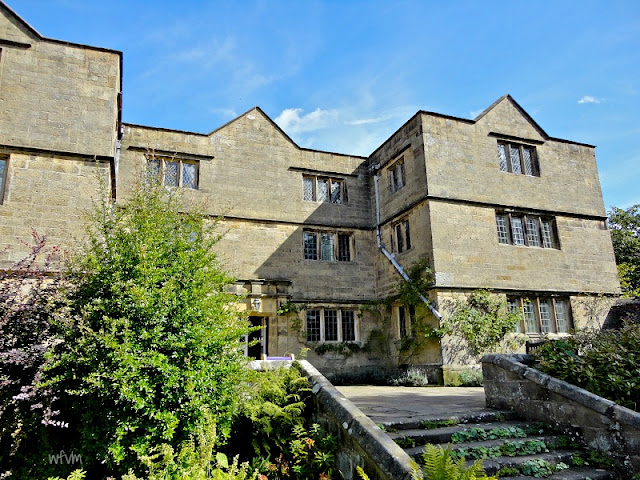 Eyam Hall began life as a generous wedding present in 1671, just five years after the plague. It has been in continuous use by the Wright family and is now owned by the ninth generation. 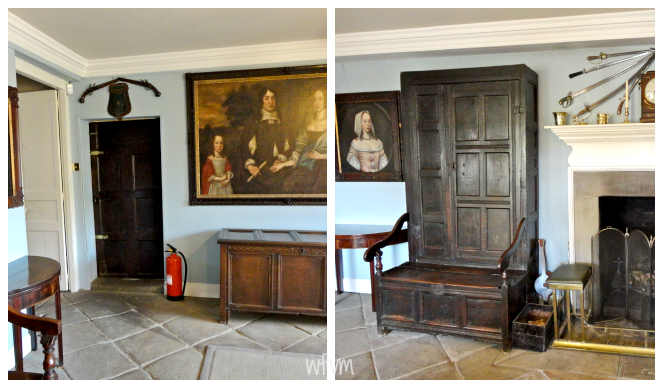 It is a remarkably unspoilt example of a Jacobean manor house. The entrance hall has a beautiful stone-flagged floor and the walls are covered with portraits showing the watchful gaze of many Wrights from down the generations. The house has a surprisingly bright, comfortable, and very pleasant feel to it. 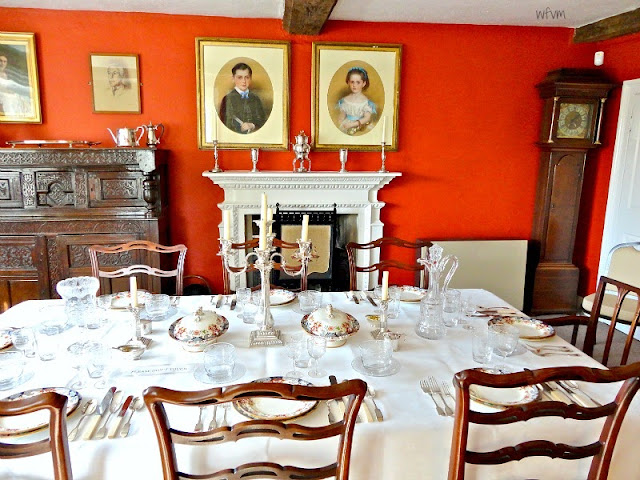 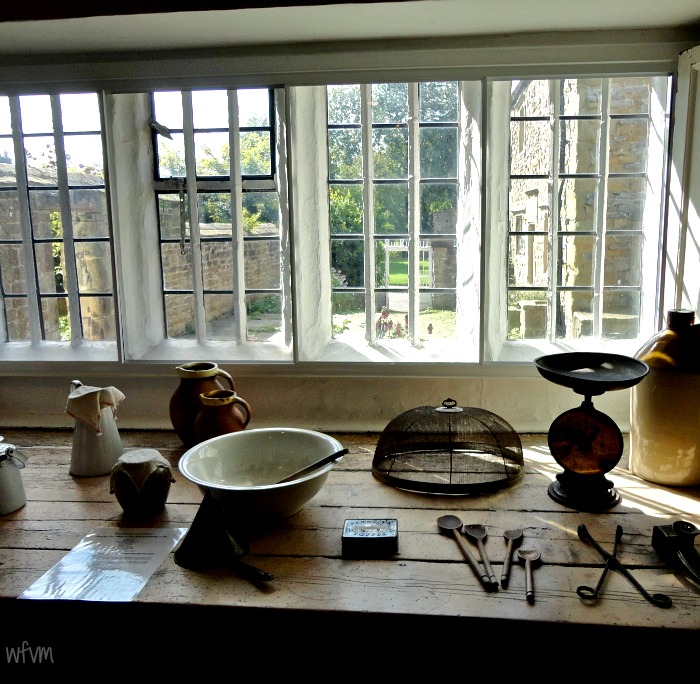 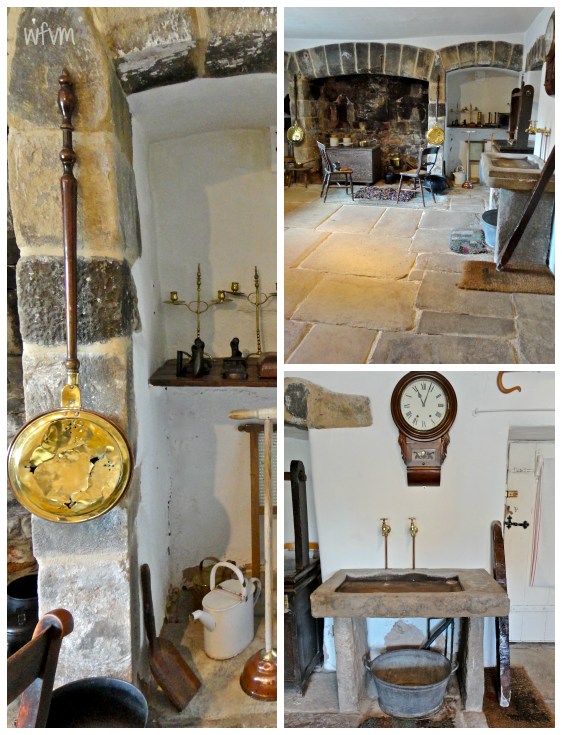 The original kitchen was discovered hidden beneath layers of plaster, linoleum, and built in cupboards. It has now been painstakingly restored to how it would have looked in the 17th century. 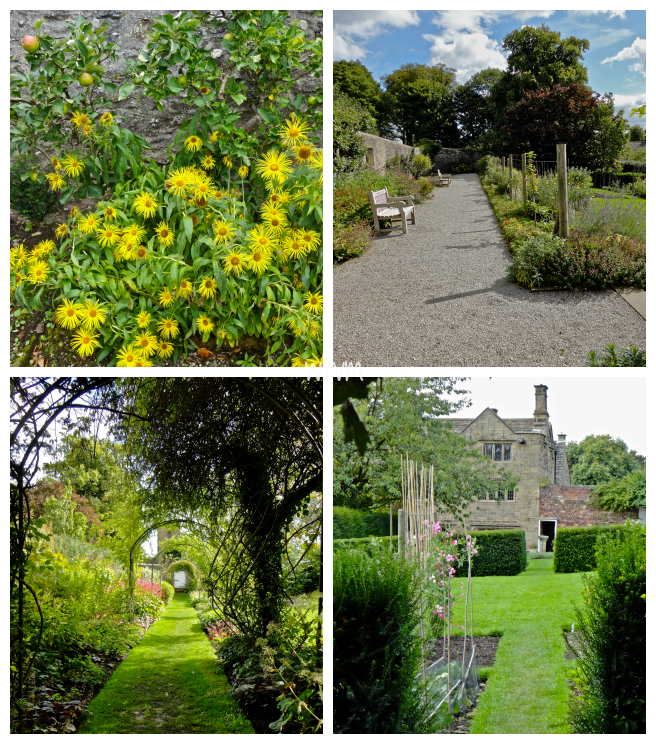 When Eyam Hall was built, it ushered in a new era of life, hope and prosperity for the villagers, following on from the communities previous grief.
Posted by Rosemary at 09:36