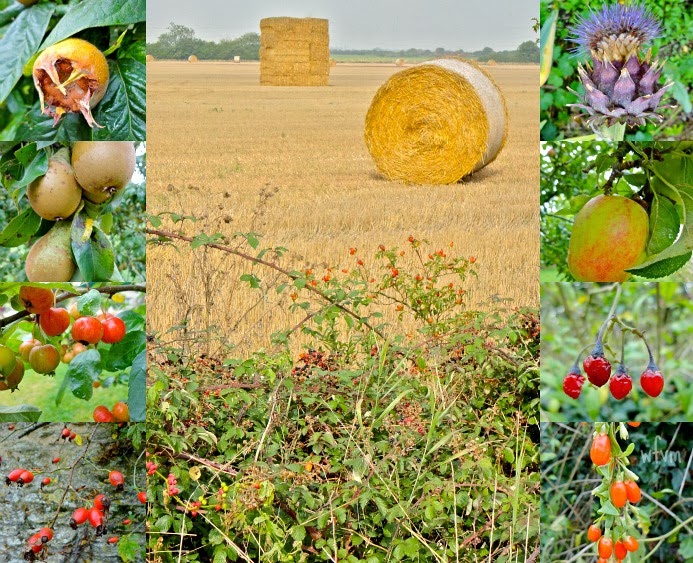 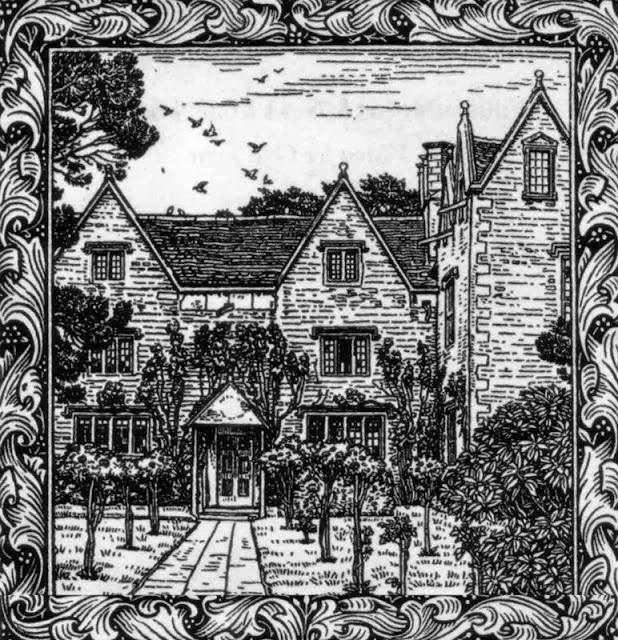 via
The frontispiece of the Kelmscott Press Edition of 'News from Nowhere' was based on a drawing by Charles Gere. William Morris designed the type and ornamental borders. 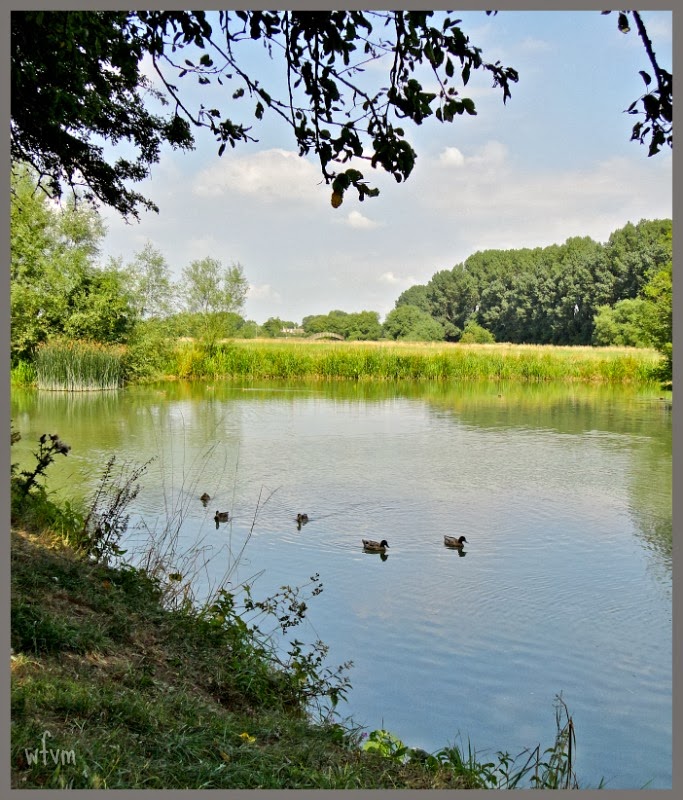 When we sat beside the River Thames recently, enjoying our picnic lunch and contemplating William Morris's home in the meadows beyond the trees, we never envisaged that we would be back here quite so soon. A good friend and her husband, who are volunteers at the Manor, kindly gave us a pair of complimentary tickets - thank you very much M & C. via
Unlike Wightwick Manor which is packed full of Arts and Crafts treasurers, Kelmscott, in comparison, is verging on being 'minimalist'. The walls are white or cream, the flooring is stone flagged or wooden with just an occasional rug scattered over them. Some of the rooms have WM wallpaper but most do not. To keep the village of Kelmscott free of traffic, visitors park their cars in a nearby field, and then take a pleasant 10 minute walk to the house. 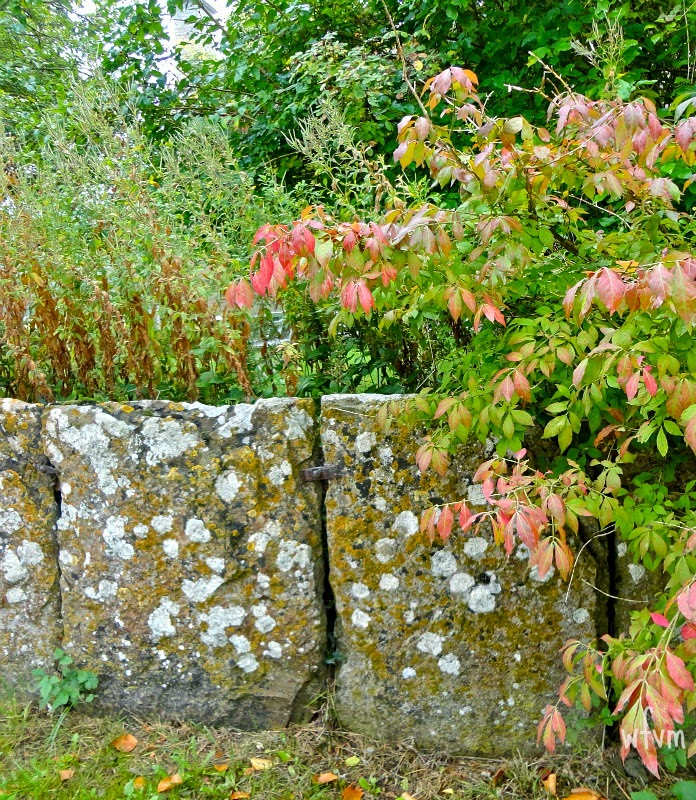 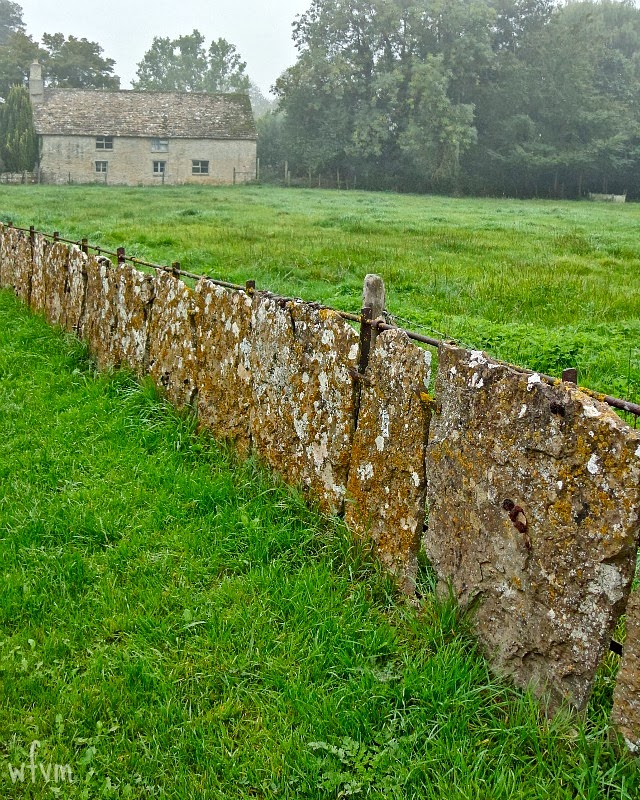 It was a misty September morning when we arrived, but soon turned into a warm sunny day. 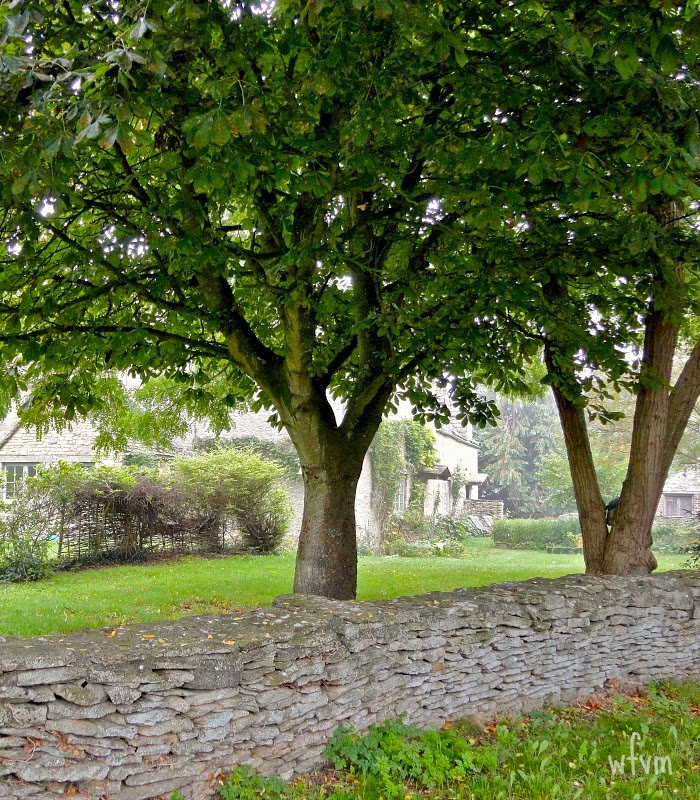 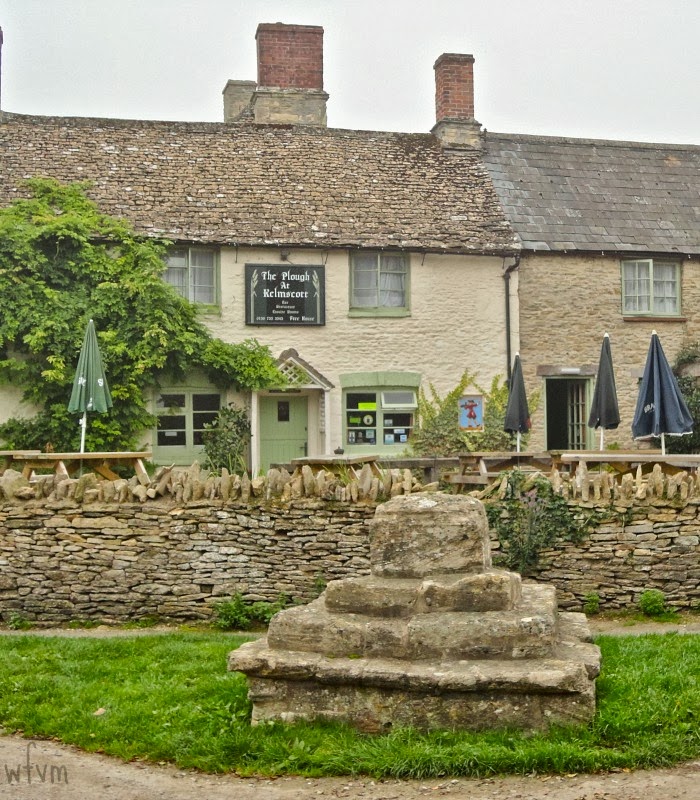 In front of the 17th century Plough Inn stands the remains of a medieval cross stump. Probably a meeting place before the 12th century church was built. 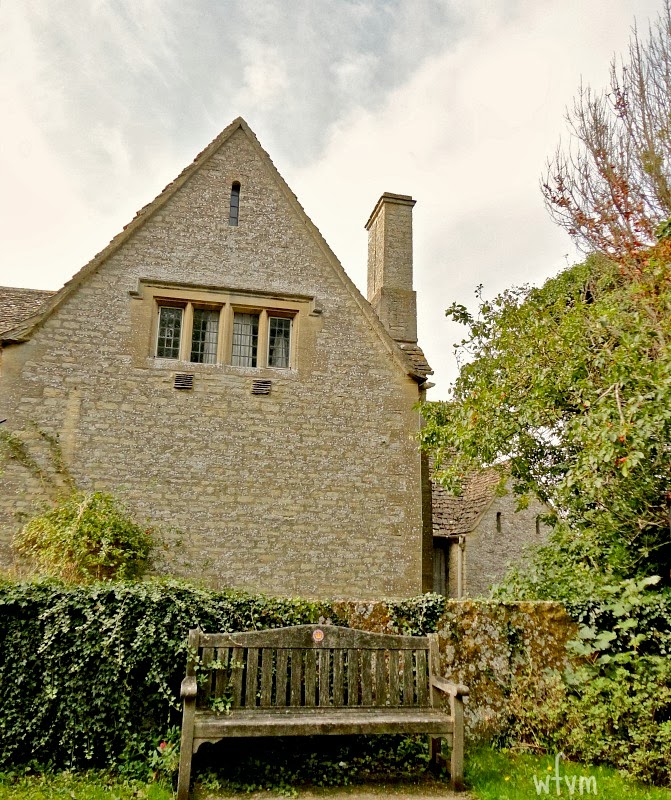 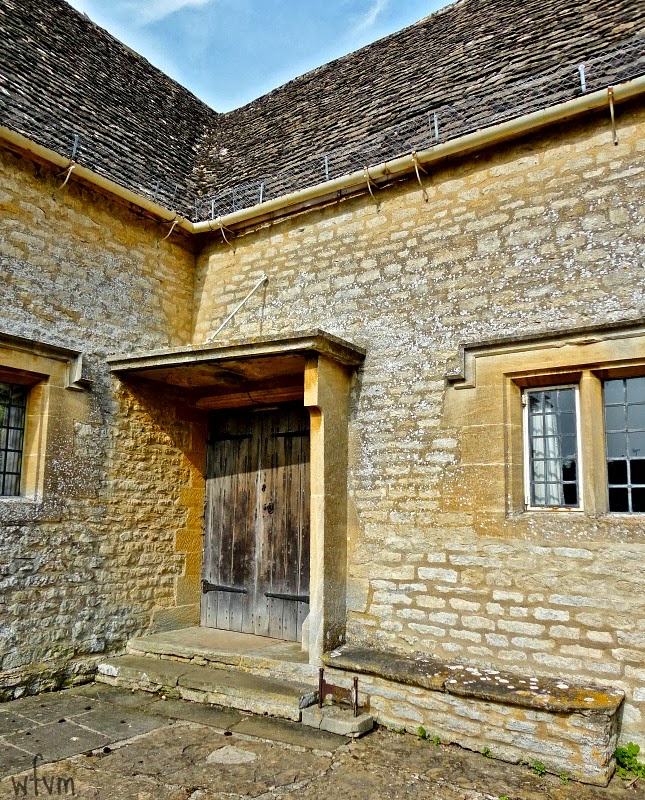 The William Morris Memorial Hall was built with funds raised by his daughter May. She asked Ernest Gimson - a Cotswolds Arts & Crafts designer/architect, and influenced by WM,  to design the building, but Ernest died before building work commenced. The building was taken on by another Cotswold Arts & Crafts architect, Norman Jewson, who had been a pupil of Gimson's at Sapperton. Sapperton is just across the valley from our home.
Many of the establishment flocked to Kelmscott for the opening of the hall in 1934, including the Prime Minister, Ramsay MacDonald. The hall was officially opened by George Bernard Shaw, reflecting Morris's Socialist connections. 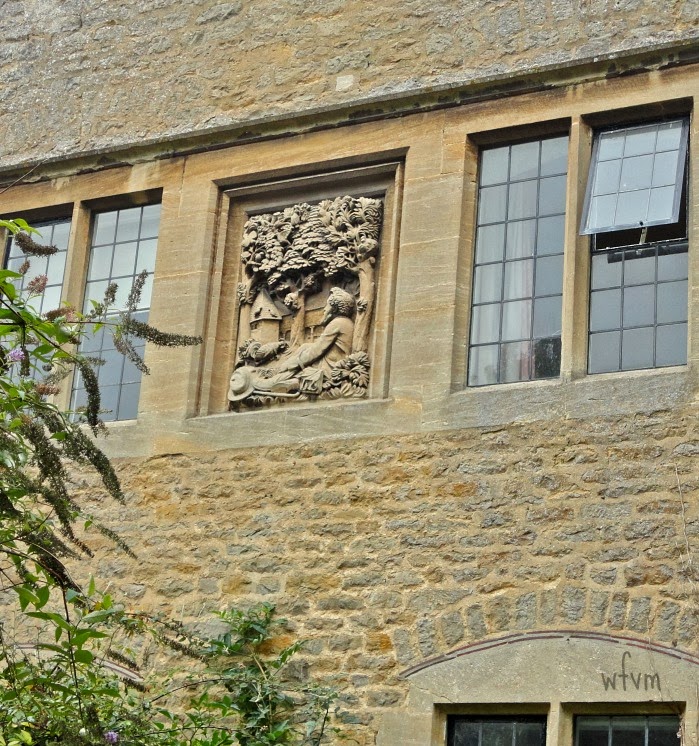 Just before reaching Kelmscott Manor, you pass a pair of Wm Morris memorial cottages commissioned by Jane following his death. The stone carving was done by George Jack from a drawing by Morris's great friend, and architect, Philip Webb, who also designed the cottages. 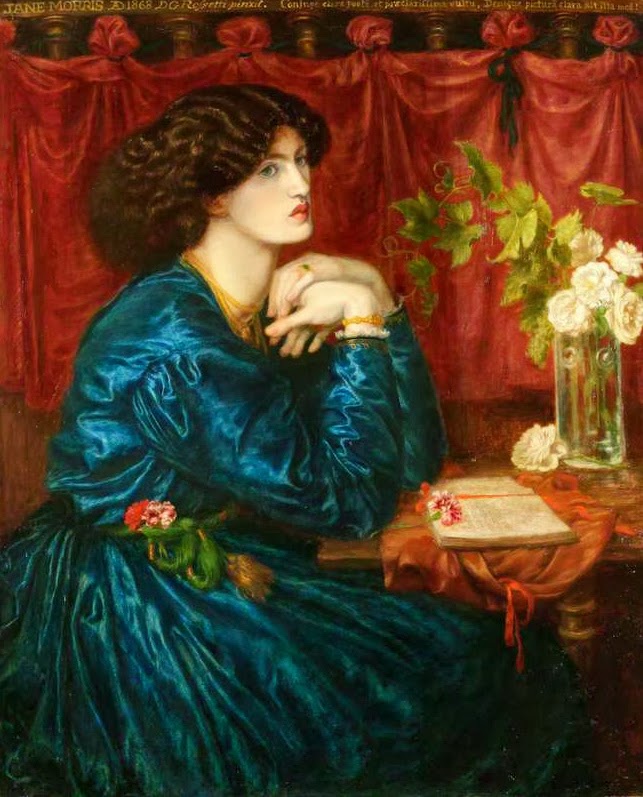 via
The Blue Silk Dress - William Morris commissioned Dante Gabriel Rossetti to paint Jane. It is considered his most reknown portrait, and perhaps conveys elements of his own feelings towards her. The Latin couplet at the top of the painting reads - Famed by her poet husband and surpassing fame for her beauty. Now let her win lasting fame by my painting.
We were fortunate to see this painting as it is regularly out on loan.
On one of the Manor walls are several Albrecht Dürer engravings. The German painter, engraver, printmaker, from Nuremberg who was greatly admired by WM. 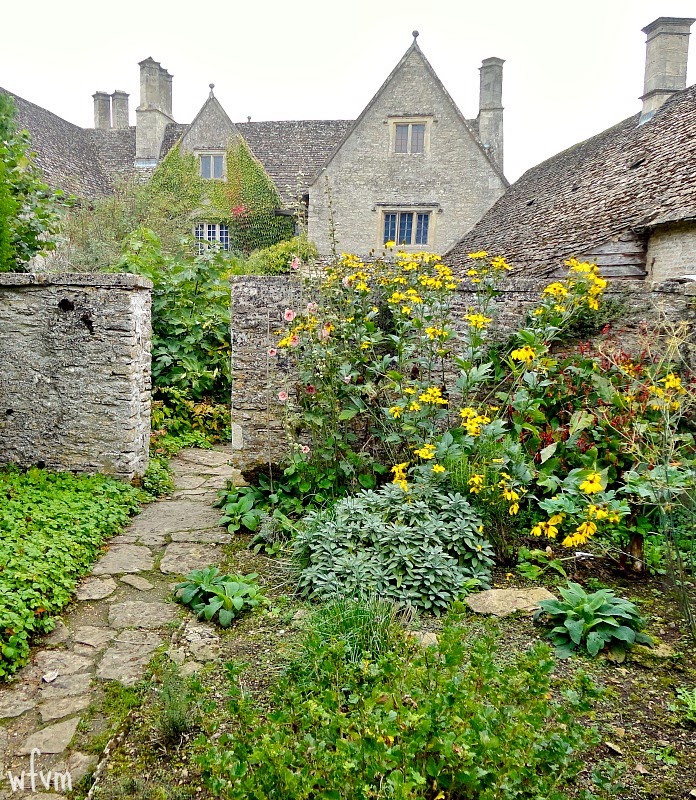 ❉William Morris writing to Charles Faulkner 1871❉
"I have been looking about for a house for the wife and children, and whither do you guess my eye is turned to now? Kelmscott, a little village about two miles above Radcot Bridge - a heaven on earth; an old stone Elizabethan house... and such a garden! Close down on the river, a boat house and all things handy. I am going there again on Saturday with Rossetti and my wife: Rossetti because he thinks of sharing it with us if the thing looks likely..."
Morris initially took a 2 year lease on the property, which he extended to 20 years, but following his death, Jane had an opportunity to purchase the manor. When Jane died it became home to their daughter May. She left it to Oxford University with various restrictive stipulations and the house fell into disrepair. In 1962 it finally became the property of the Society of Antiquaries of London, who have painstakingly restored it. 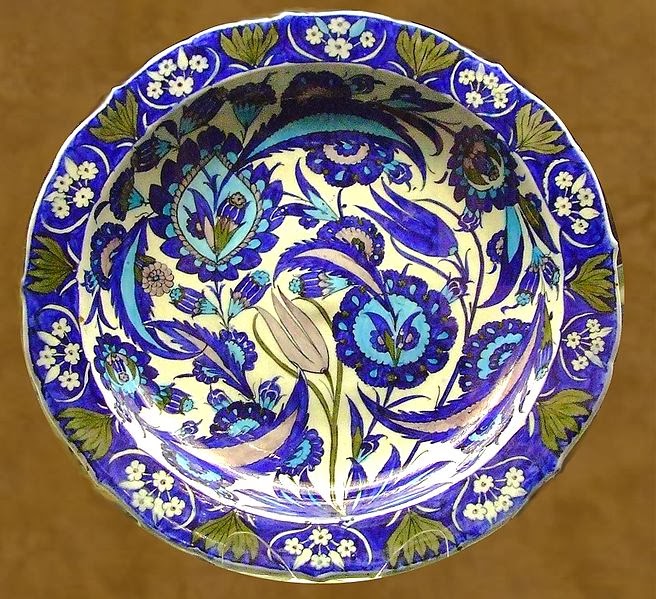 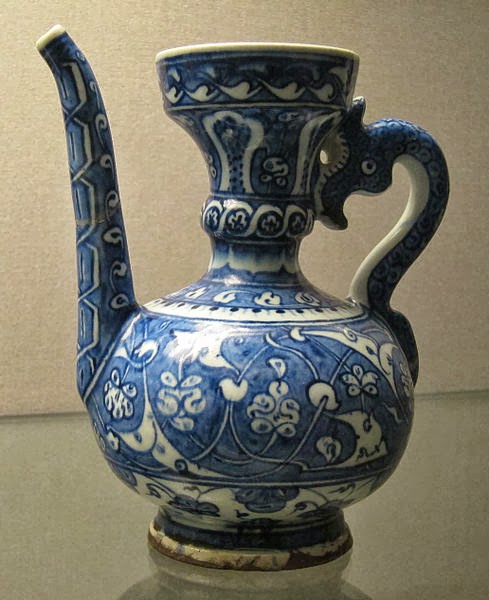 via
In the house is a large collection of WM's Iznik pottery from Turkey and Syria which he loved. The designs of this pottery greatly influenced his friend and potter, William De Morgan.
There are quite a few of WM's embroidery hangings on the walls including the very first piece he did when he was just 23 years old. 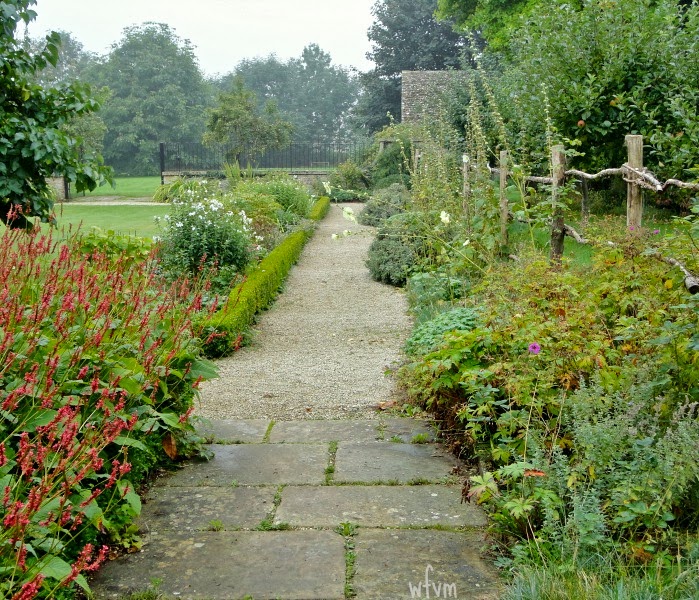 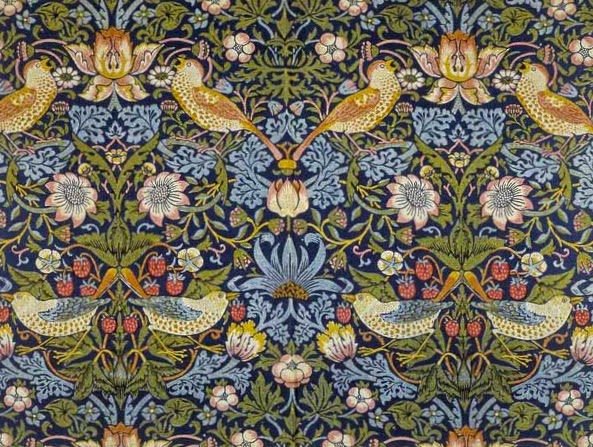 via
Inspiration for Strawberry Thief design came to WM when he was watching thrushes stealing fruit in this garden. 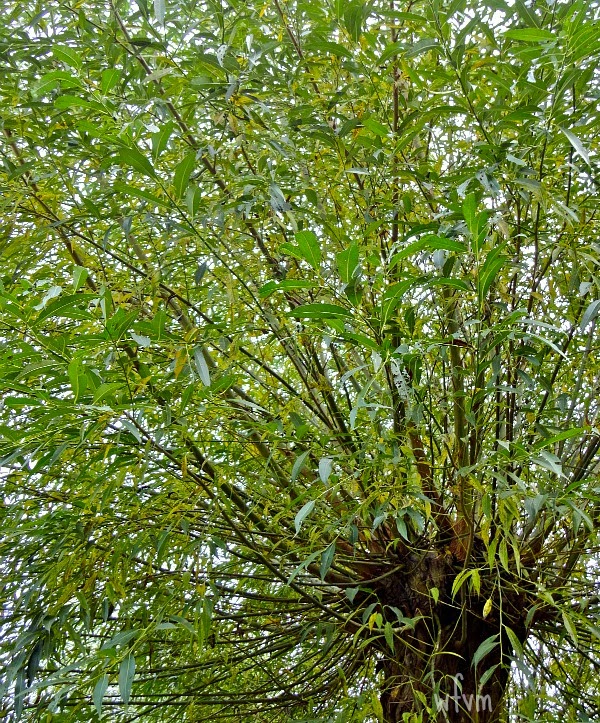 I wondered whether the profusion of willow trees growing along the Thames tributary through his garden had played any influence on his design for Willow. 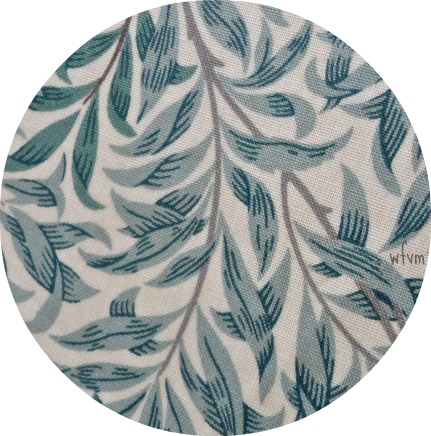 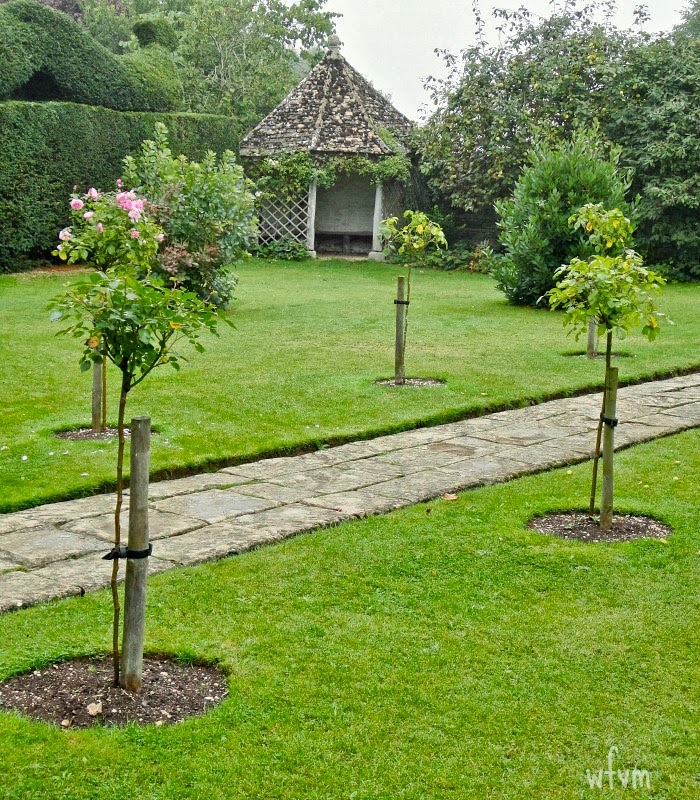 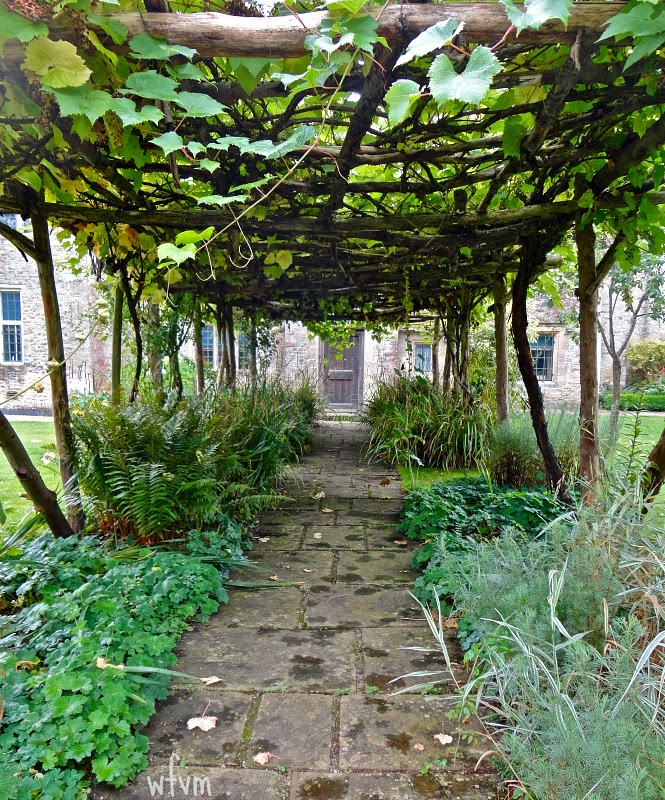 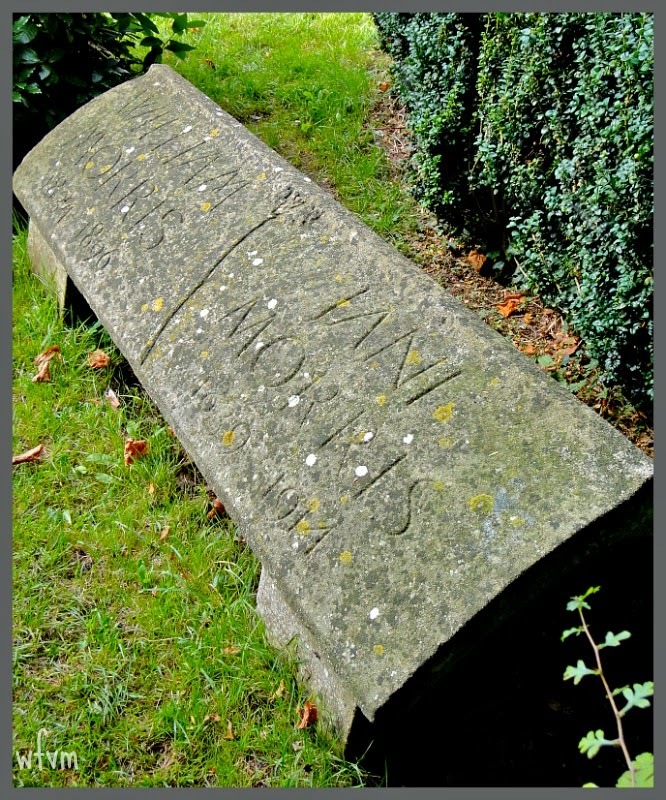