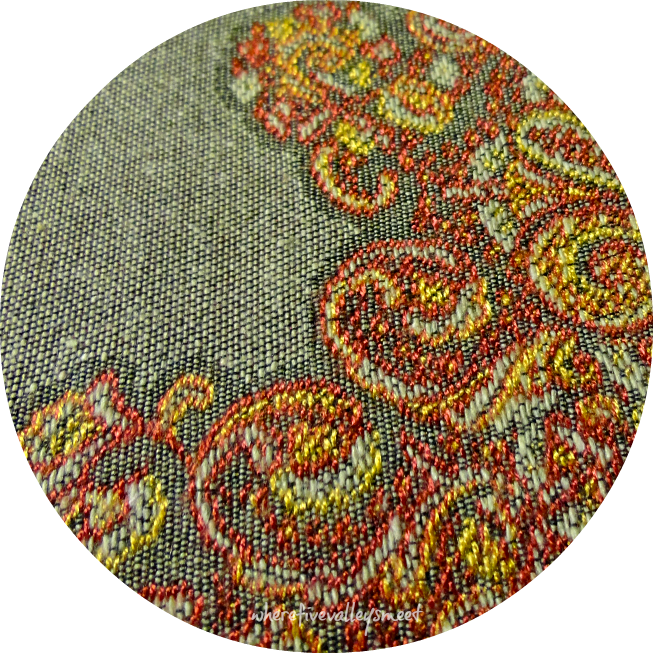 Paisley is the generic term used worldwide to describe this pattern. Although the design was made popular by the town of Paisley during the 19th century it actually originated many centuries earlier in Asia, principally Persia now Iran, and Kashmir in northern India. The East India Company first began importing fabrics bearing the design during the 17th century to Britain. 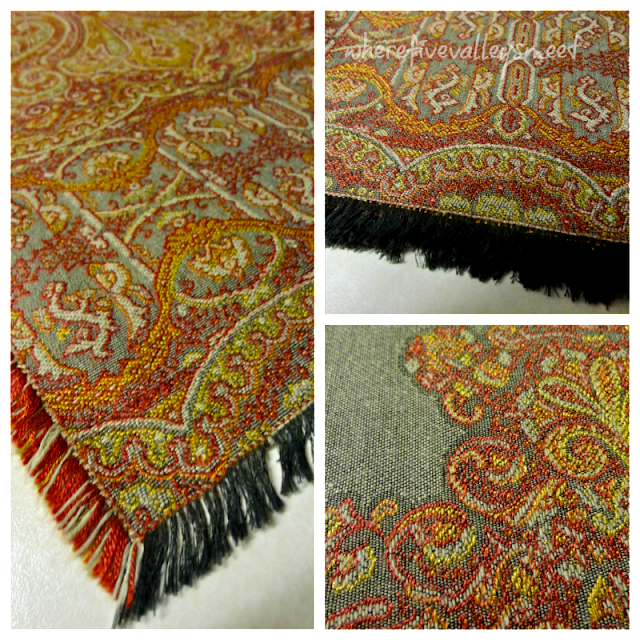 This paisley throw is mine
It also became very popular in France and eventually the design was replicated by their own textile printers; in France the paisley design led on to the production of patterns such as toile de jouy.
During the 19th century soldiers returning from the colonies brought home fine cashmere shawls which became a very popular accessory, but to buy these shawls in Britain was incredibly expensive.  The Paisley weavers decided to turn their hands to producing similar patterns to those arriving from Kashmir, India, and hence the name Paisley became synonymous with the design.
Paisley is a town in Renfrewshire just west of Glasgow in Scotland. Every cottage along some streets had a jacquard loom operated by a family. They were very successful and were able to undercut the Indian imports by charging 90% less for their paisley shawls. Eventually mills were built to accommodate the Jacquard hand-looms which attracted many workers and their families to moved to Paisley. 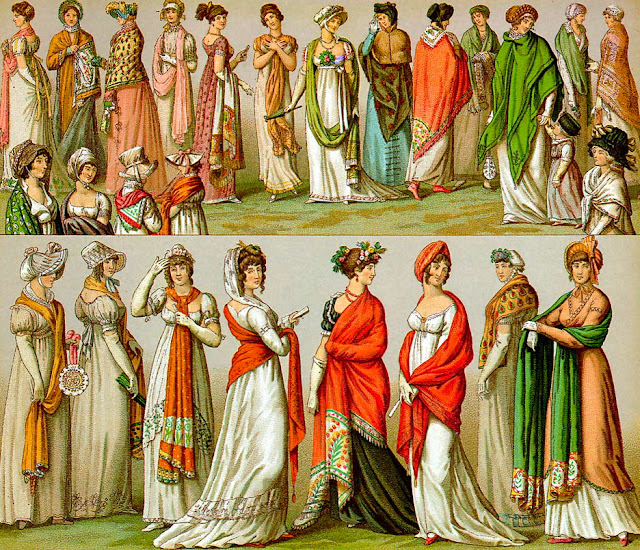 via
Regency Empire stoles and shawls in France 1888 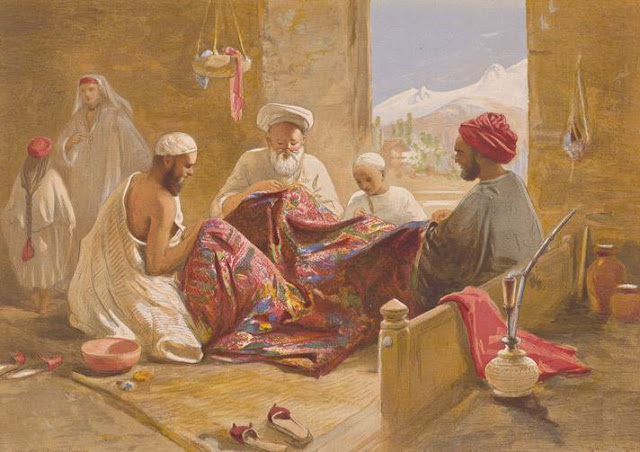 via
Muslim shawl makers in Kashmir 1867 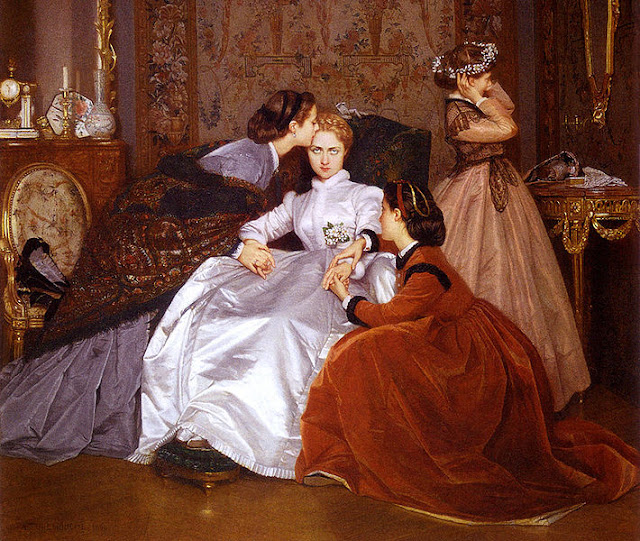 via
The Reluctant Bride by Auguste Toulmouche 1866
This French painting shows the popularity of the Paisley style shawl in France. 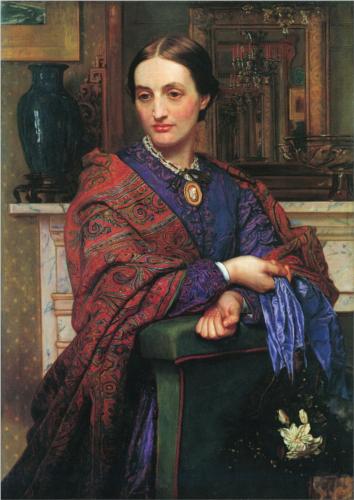 via
Portrait of Fanny Holman-Hunt by her husband William - this painting is also dated 1866 and shows how the shawl was popular in both countries. 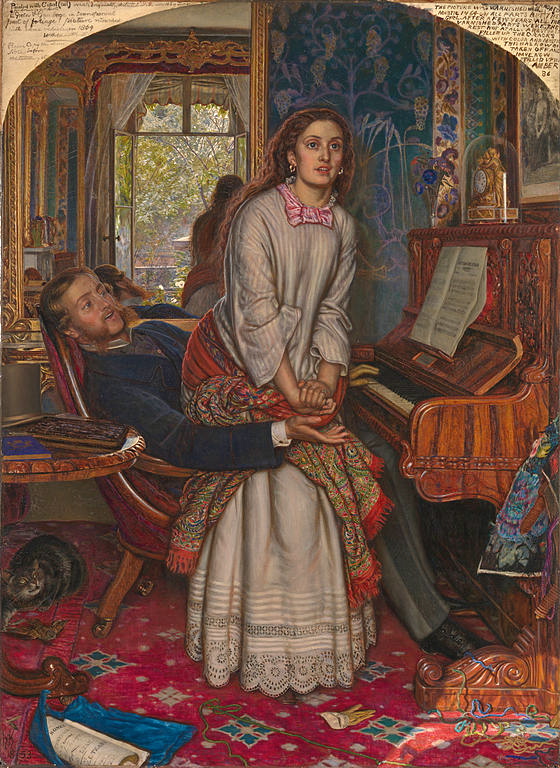 via
The awakening conscience - William Holman-Hunt 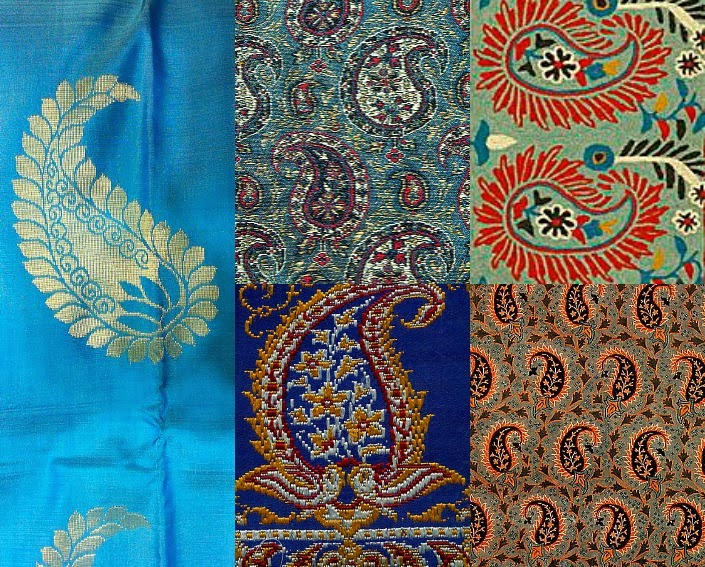 via
Paisley seems to have a perennial appeal and is just as popular today. It appears on ties, scarves, throws, dresses, blouses, curtain fabric, and even bedlinen.
Posted by Rosemary at 10:50