How could I resist a special late summer evening "opening" to visit the home of Nato and Sirana my favourite species of animal in all the world? Our "inbox" gave us the opportunity to buy one ticket and get one free. These animals are nocturnal so an evening opening must surely be the best time to call, not only that but February saw Sirana give birth to an adorable little girl called Winnie, weighing in at 5kg - about the same size as a large human baby.
An evening at Bristol Zoo, our destination, with keepers on hand to talk about important conservation work, and breeding projects involving both protecting and ultimately returning animals back to the wild. In principle I am not a lover of caged animals, but in the world today the zoo has an important role to play. Their emphasis has changed dramatically from that of the original Victorian concept. Today the animals have luxury accommodation with lots of space to encourage breeding and to support reintroduction back into the natural world.
My animals are native to the steamy forests and swamps of West Africa, primarily Liberia, Sierra Leone and Cote d'Ivoire. Rarely seen, being both reclusive and nocturnal, they are on the 'red alert' critically endangered list. The zoo makes regular visits overseas to encourage local people to view their native animals as special assets and not to kill them for bush meat. The animals in Africa also have to contend with conflict situations and habitat depletion.
Have you guessed what my favourite animal is? I know that my blogging friend Mark will be well aware of what species I am referring to - indeed he kindly gifted me one which can be seen at the bottom of my blog 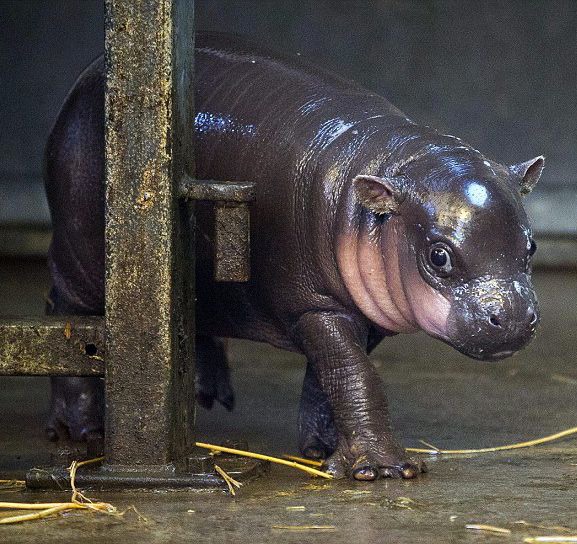 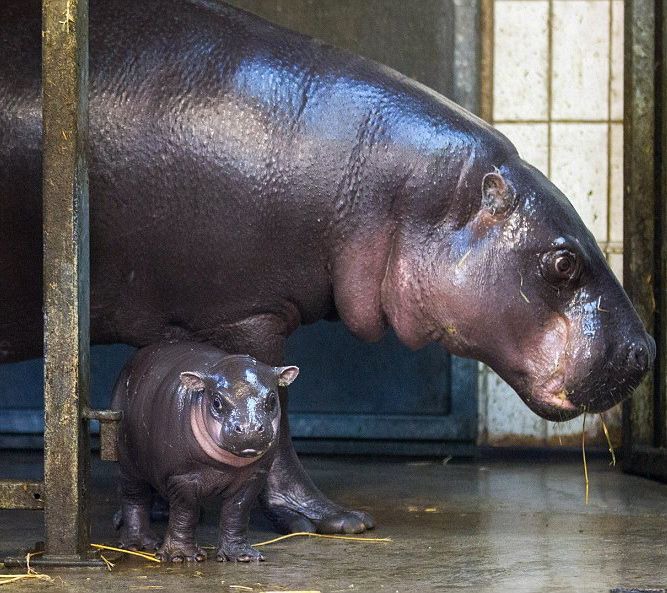 via
Proud mum Sirana and daughter

Being reclusive, nocturnal, solitary and living in dense jungle they have a totally different lifestyle to the common hippo which live in large groups, and can be seen wallowing in muddy lagoons all day long. Pygmy Hippos have a smaller head and less prominent eyes and ears, and rather cleverly can close their nose and ears when underwater. They are half as tall as the common hippos and weigh less than a quarter of a full sized hippo.
Recently I saw a film about a young female Zoologist who spent 6 months living in the jungle in a known Pygmy Hippo location. During all the time she was living amongst them she didn't catch a single glimpse of one in the flesh, and only managed to catch the odd one as it briefly activated her infrared night cameras which she had set up in the trees. 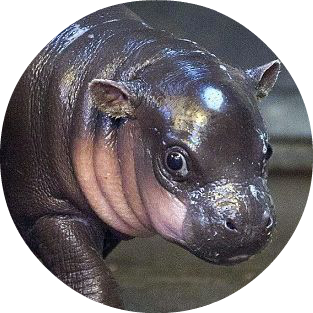 Winnie is now six months old and has started to venture outside. She tends to stay close to her mother but is slowly beginning to forage for food outside in the Pygmy Hippo enclosure and swim in their outdoor pool.
Although Dad, Nato, lives alongside them, he plays no part in Winnie's upbringing. They have separate enclosures because of their preference to live a solitary life in the wild, he and Sirana only come together to breed.