The ancient cities of Myra & Simena

Greetings courtesy our lovely driver 'Omar' - a patient, delightful man, with a ready smile, and a fantastic pair of eyebrows. 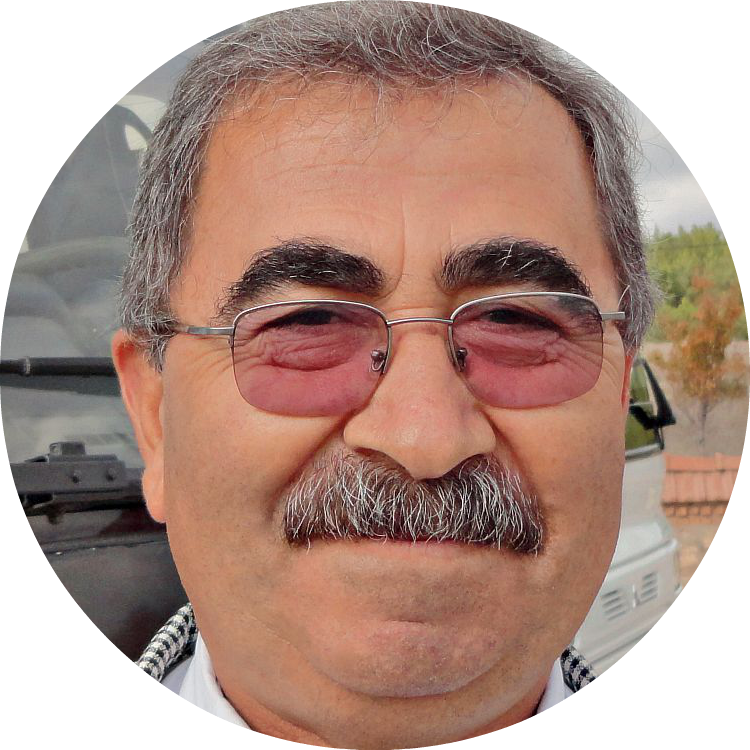 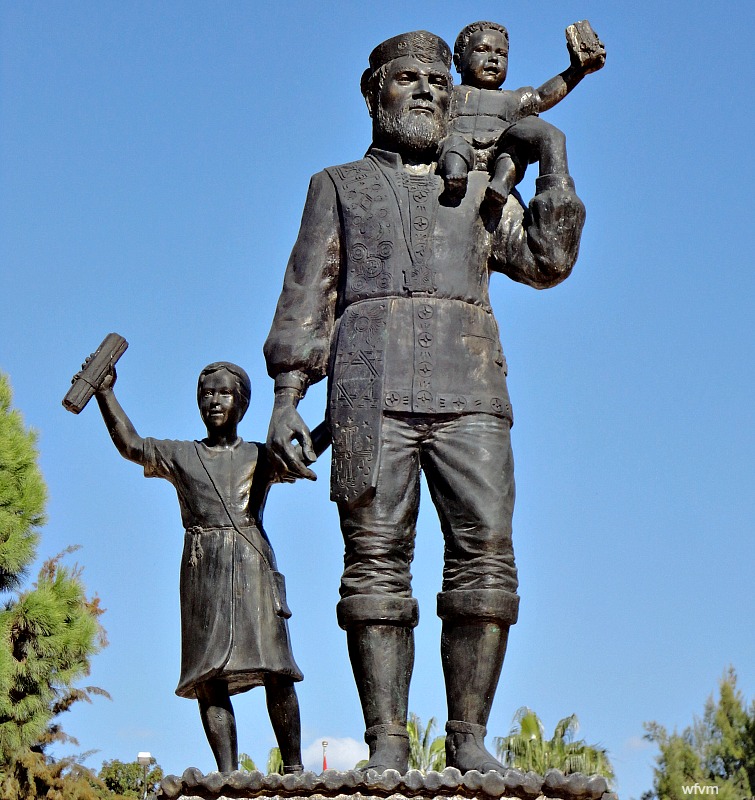 It was from Demre that the cult of St. Nicholas spread around the world - he was known for his charitable nature and humility. This statue in Demre town square shows him looking like the familiar figure of Father Christmas, however, the image below from a wall painting in his church is probably a more accurate portrayal of him 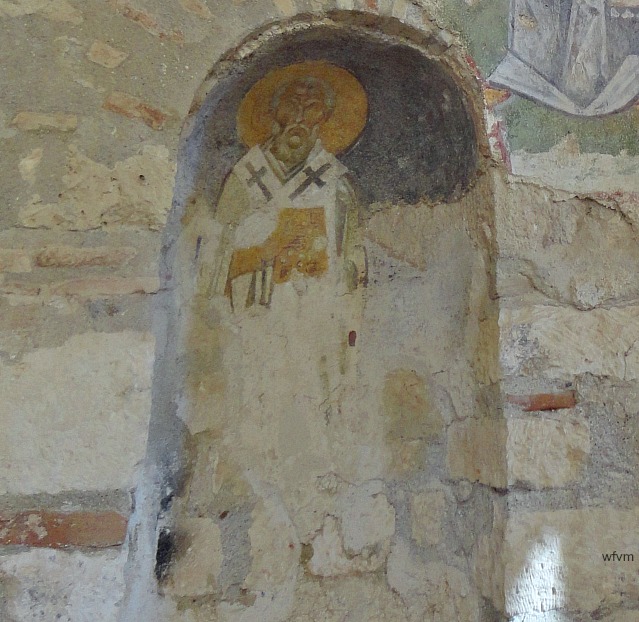 The ancient Byzantine church in Myra (now Demre) is where St. Nicholas was appointed Bishop in the 4th century. He is an especially important figure within the Greek and Russian Orthodox church.  The church of St. Nicholas dates from 400 - 1100 - it is where he was interred, and his desecrated sarcophagus can still be seen. His bones are said to have been stolen by seafaring raiders from Bari, in Apulia, Italy where they now reside. 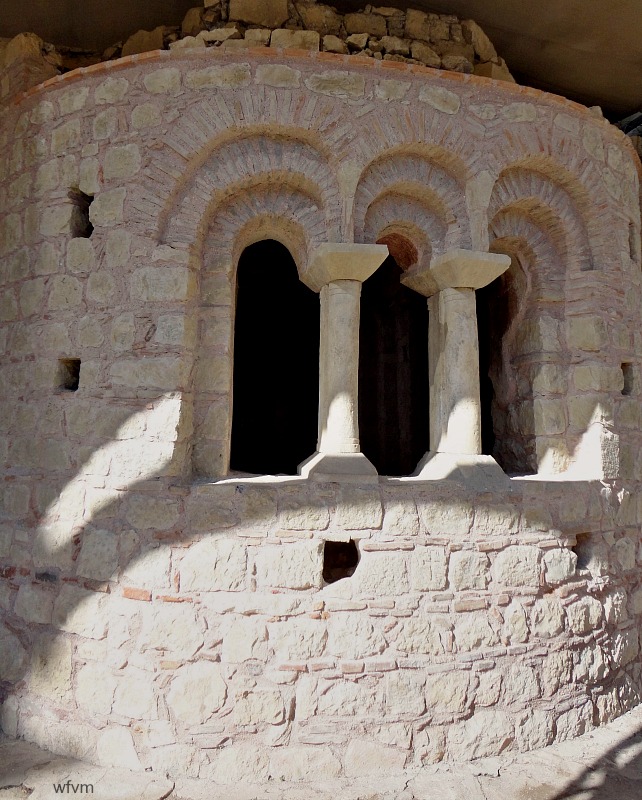 Although some restoration and archaeological work is being carried out, the church has suffered the ravages  of countless wars and attacks over the centuries. It was damaged during an earthquake in the 8th century, and in the late 12th century there was a terrible flood causing the city of Myra and the church to be filled with floodwater and alluvial soil. Today's city lies approximately 6 metres above the ground level of the church. 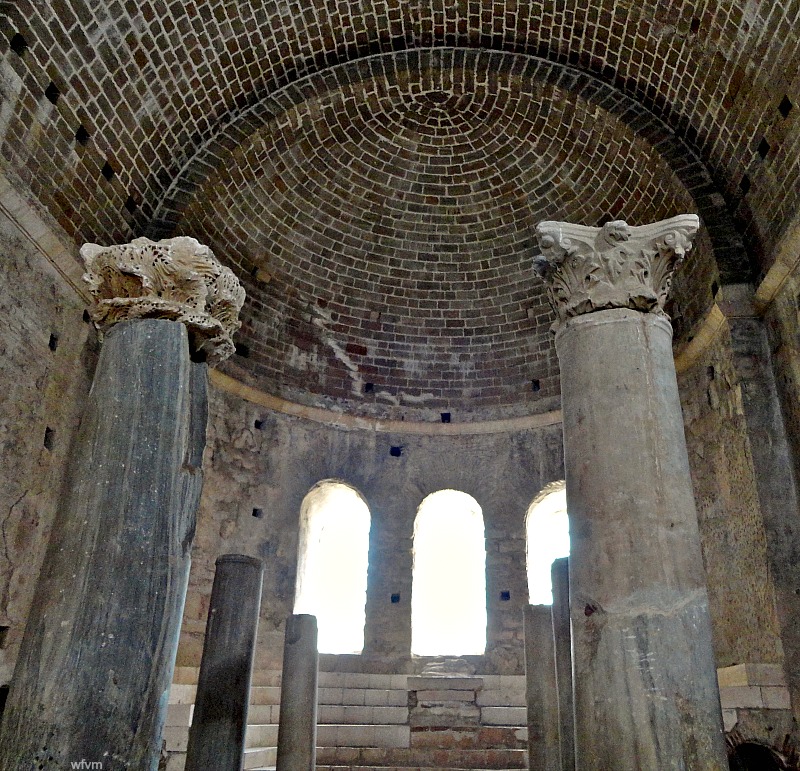 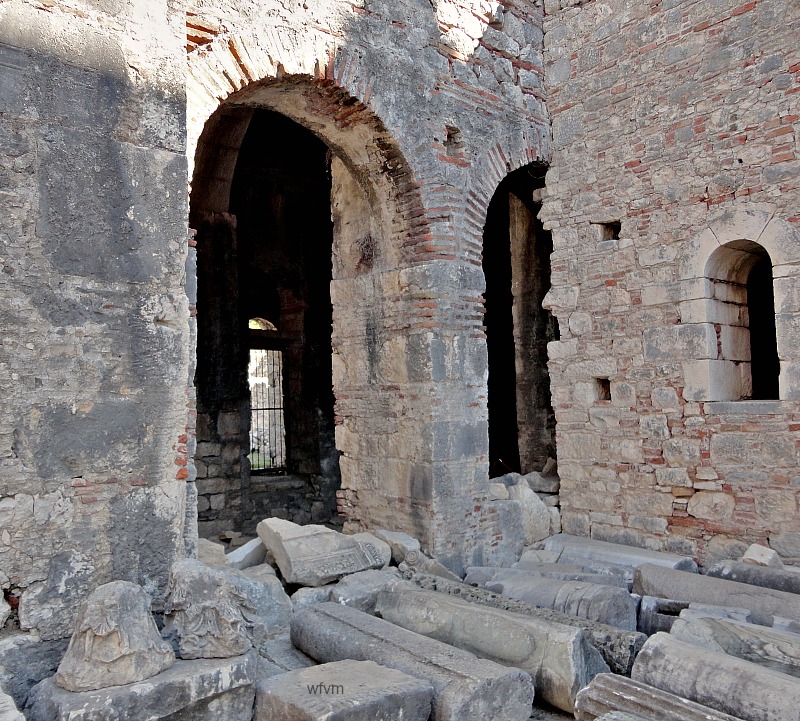 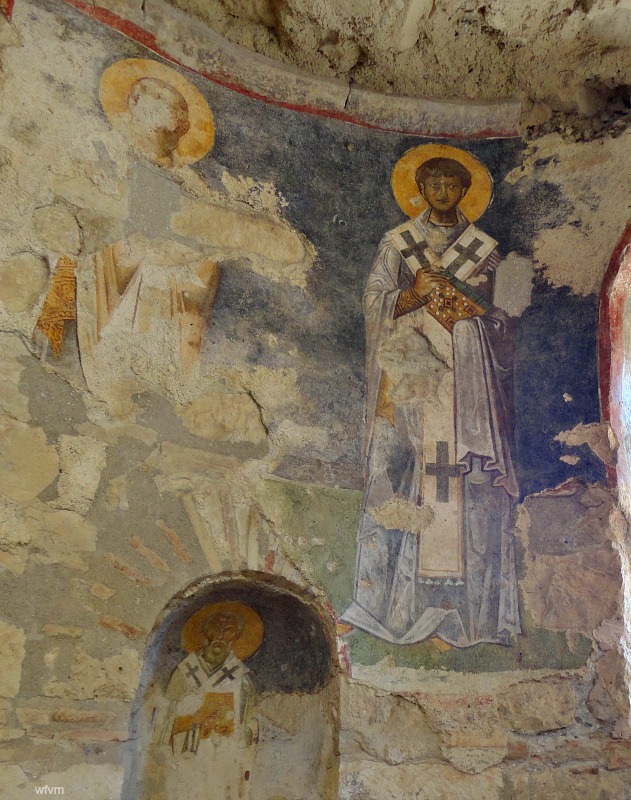 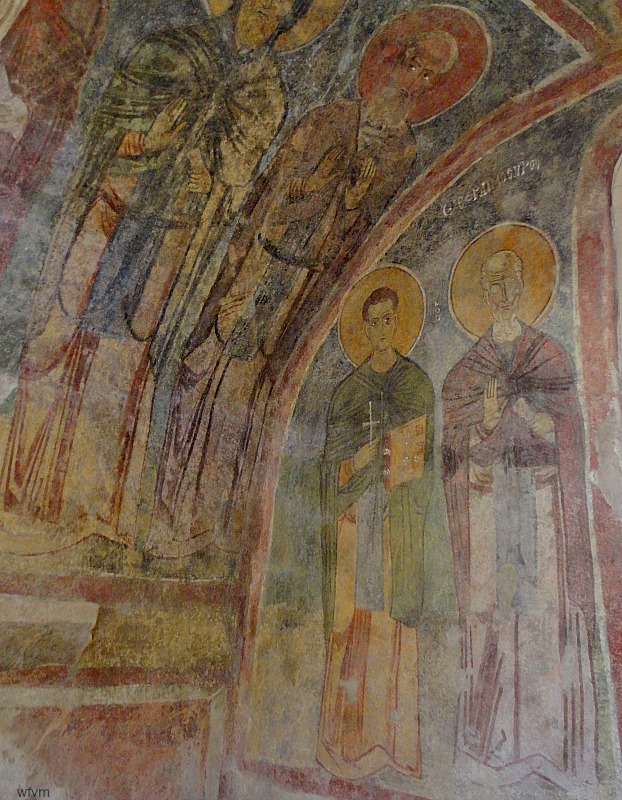 The wall paintings show St. Nicholas depicted as a bishop in the first ever ecumenical council in Nicaea along with other bishops 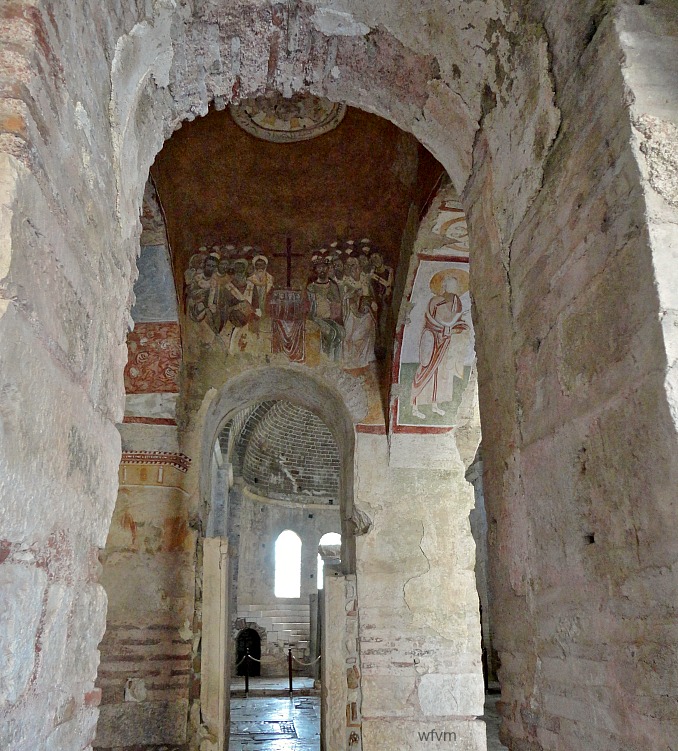 This wall painting appears to show Constantine wearing a crown on the righthand side and St. Nicholas on the lefthand side of the cross
A mosaic of Constantine from a lunette in Hagia Sophia, Istanbul 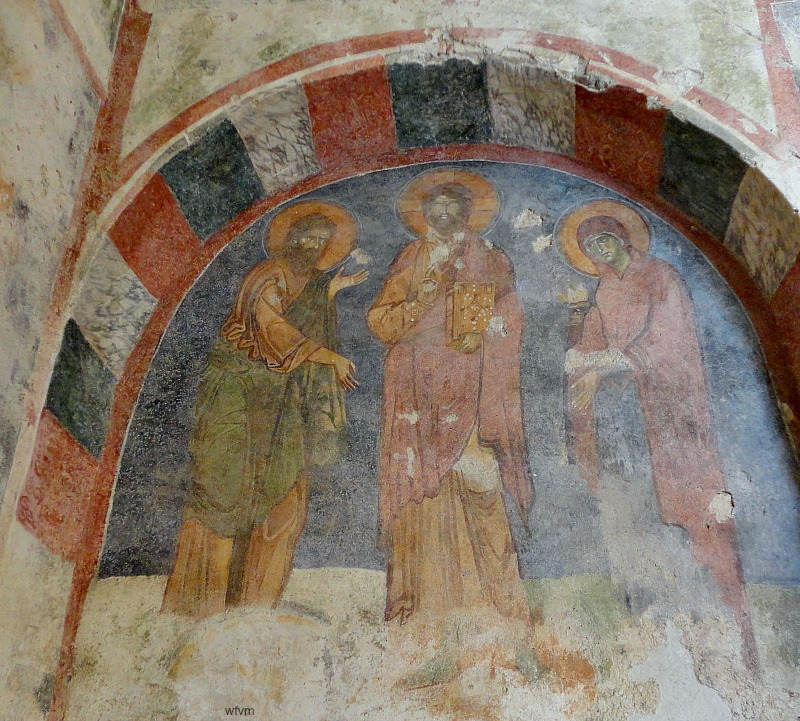 Many of the wall paintings also show scenes from St. Nicholas's life, and his miracles 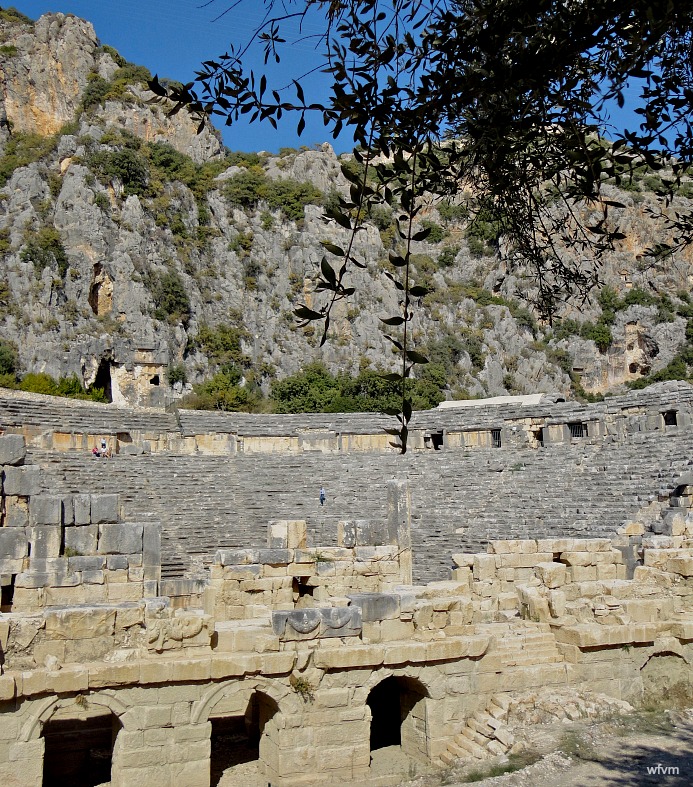 Just north of what is now the city of Demre lie the remains of ancient Myra. The foundation date is unknown as there is no literary mention of Myra before the 1st century BC when it is said to have been one of the six leading cities in the Lycian Union. It is believed, however, to date back much further as there is an outer defensive wall which has been dated to the 5th century BC. 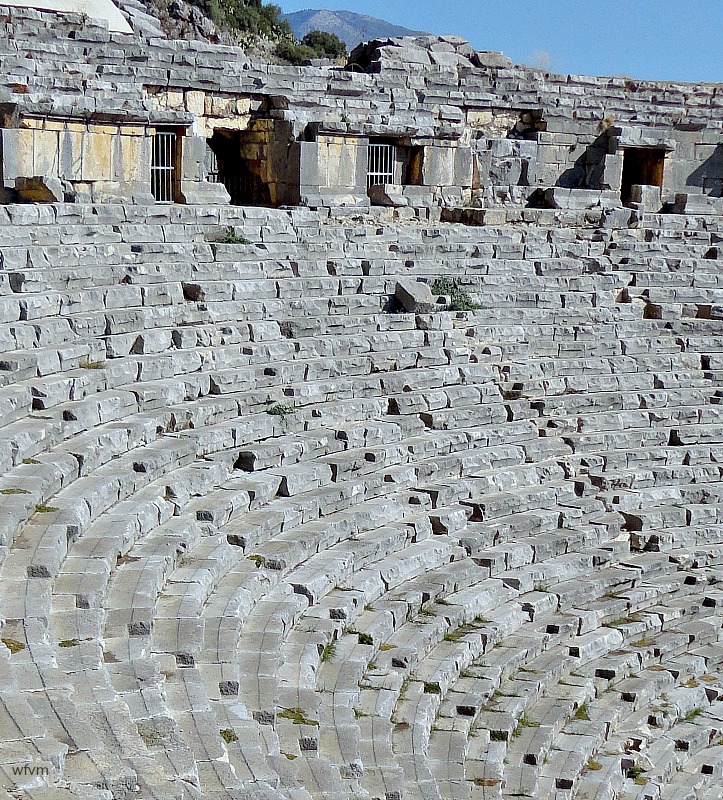 Myra is known for its Greco-Roman Theatre, the largest in Lycia, set against a dramatic rocky backdrop. Its double vaulted corridors are still preserved and it has 38 rows of seats. Its facade was richly decorated with theatrical masks and mythological scenes. 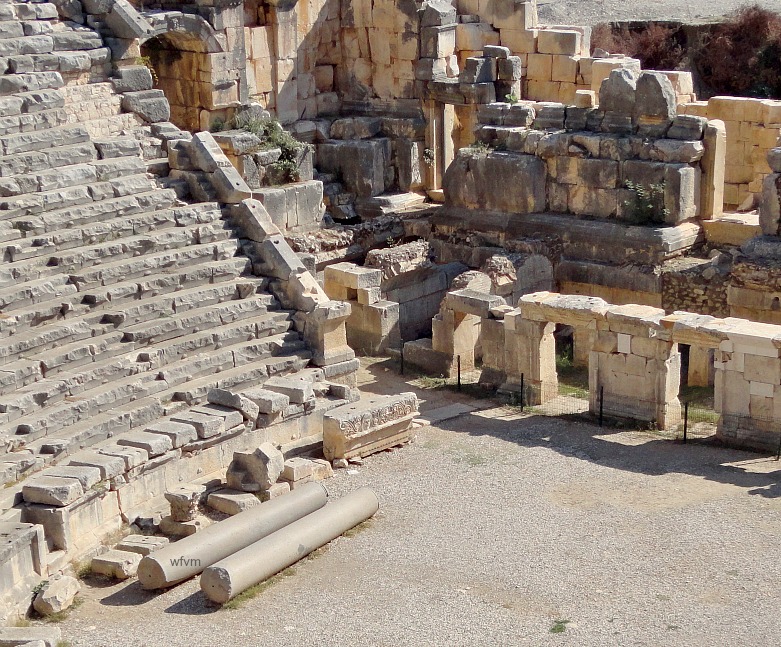 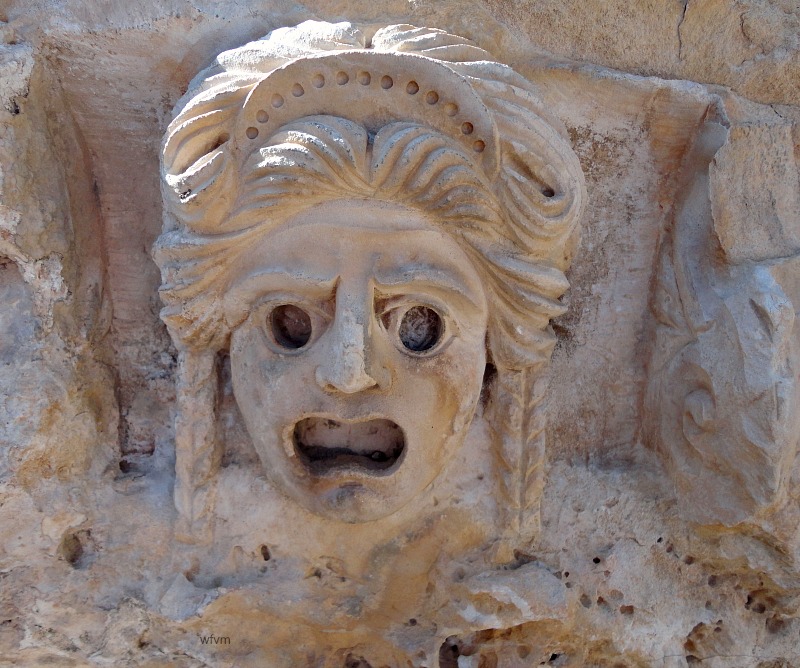 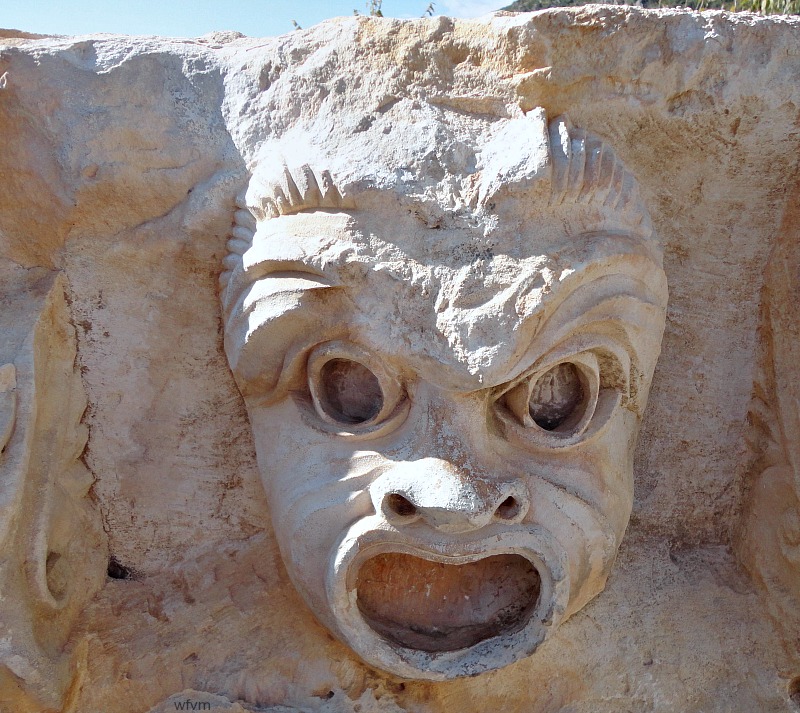 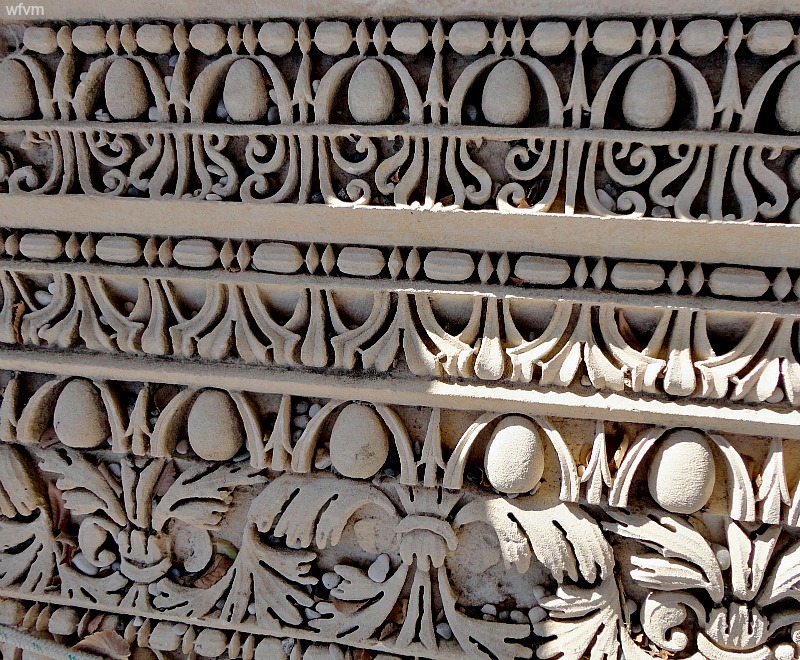 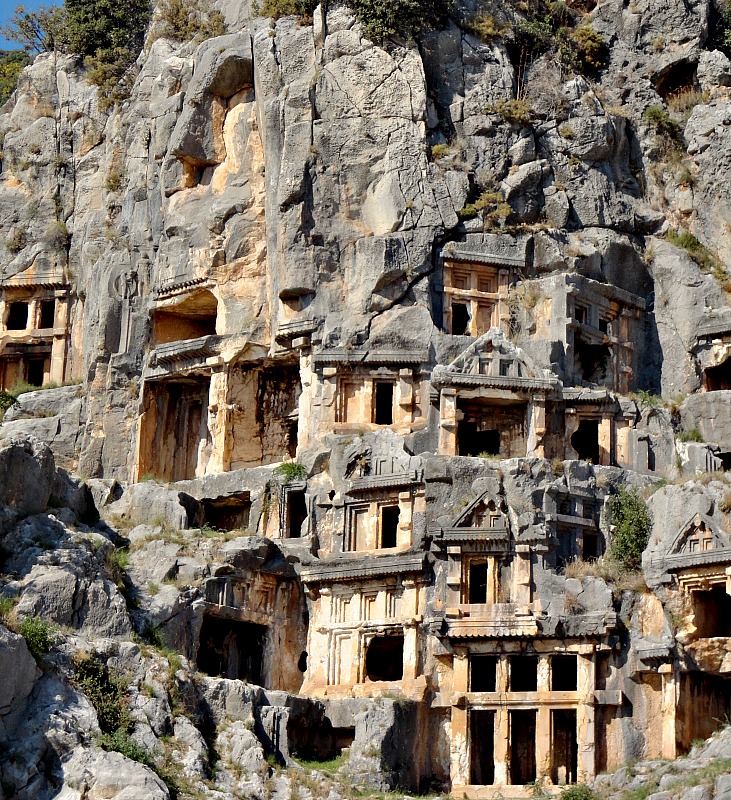 On the rock face behind the theatre sits the dramatic necropolis of rock cut tombs. Most of the tombs date back to the 4th century BC and many contain funeral scenes in relief, some scenes portraying the daily life of the deceased. There are still traces of red, yellow and blue paint, so the entire cliff face must have once been a riot of colour. They are called house type tombs and even the beams of wooden houses have been faithfully reproduced in stone. 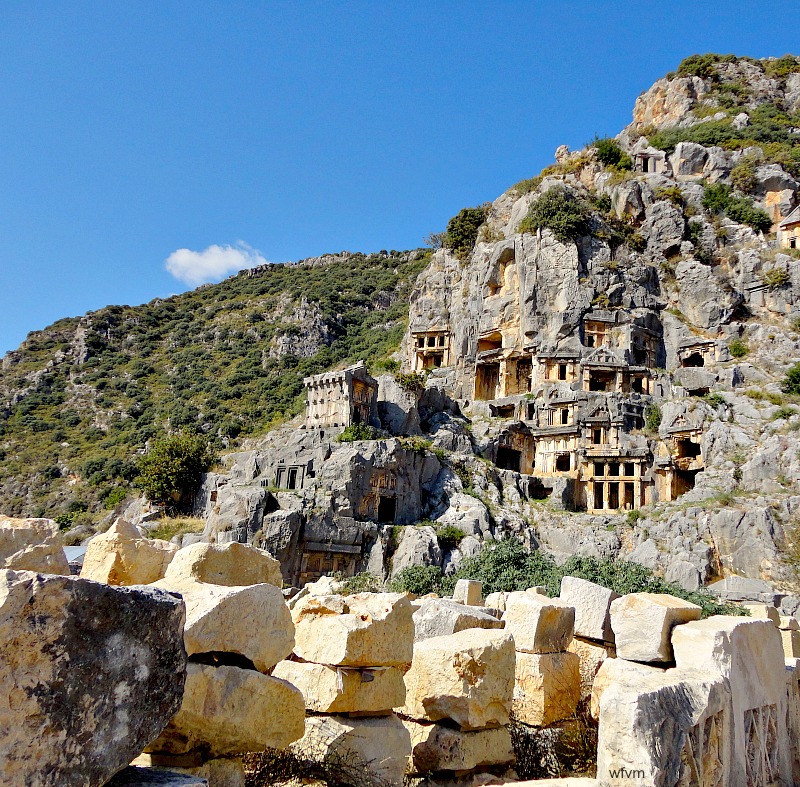 A boat trip from the village of Kaleköy (castle village) revealed the half submerged ruins of the ancient sunken city of Simena, dating back to the 4th century BC. During the 2nd century AD there was a downward shift of land caused by a terrible earthquake which resulted in half of the city being thrust downwards and submerged into the water. 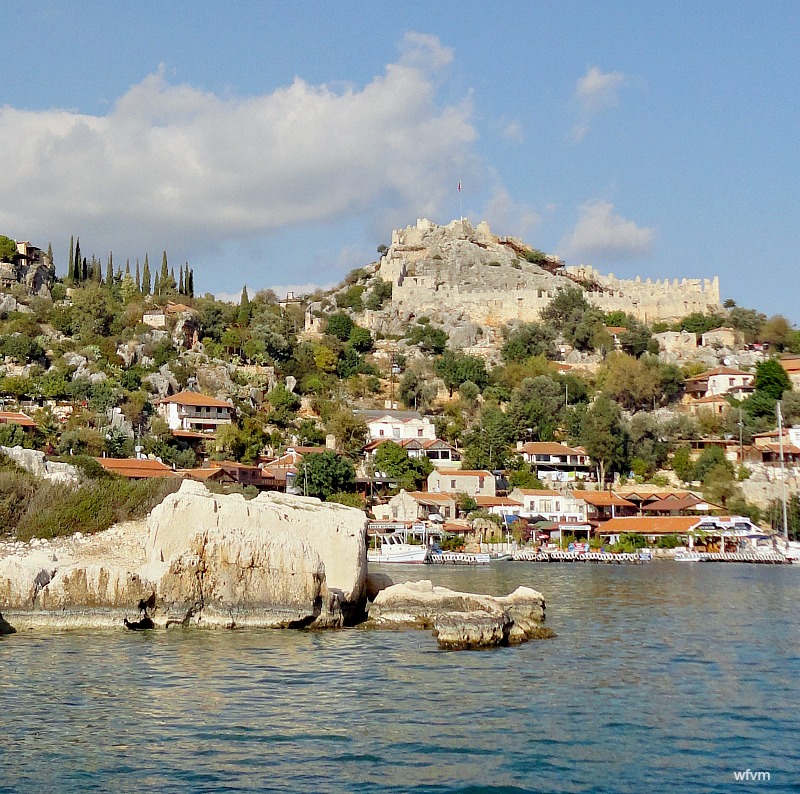 The boat passed by the village of Kaleköy dominated by a well preserved castle built by the Knights of St. John when it became a crusader's outpost. Later it was occupied by the Ottoman Empire. 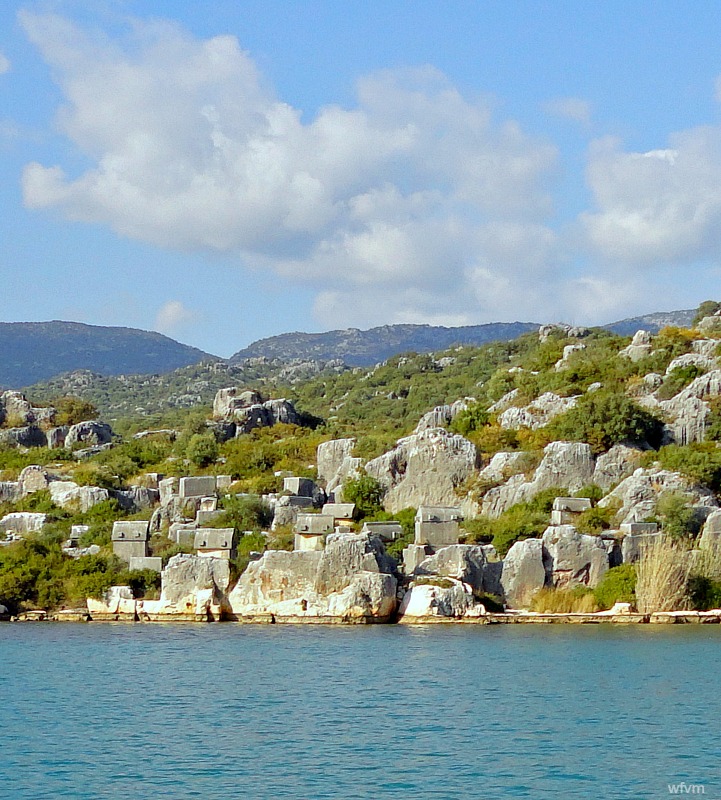 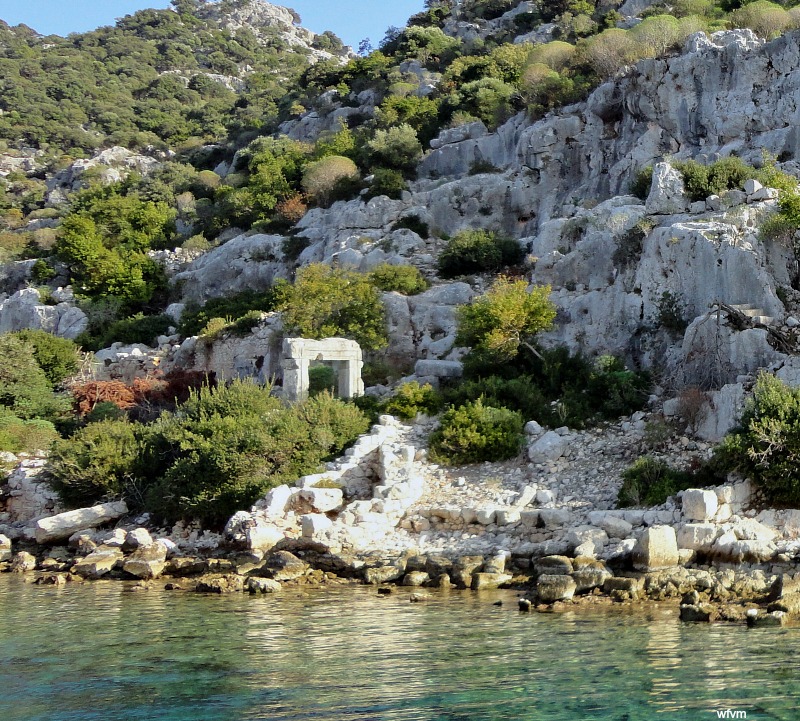 Nearly two thousand years after the earthquake and a square entrance portal from the ancient city of  Simena still stands defiantly
Visible remains under the sea. Cut off except by boat from the rest of ancient Simena, it is now home to feral goats
Posted by Rosemary at 13:05