It is impossible for me to do justice to the splendours of Ephesus, a flourishing metropolis from the days of antiquity.
We approached it from a high plain surrounded by hills and let the glories of its architectural remains unfold before us as we walked down through the city. 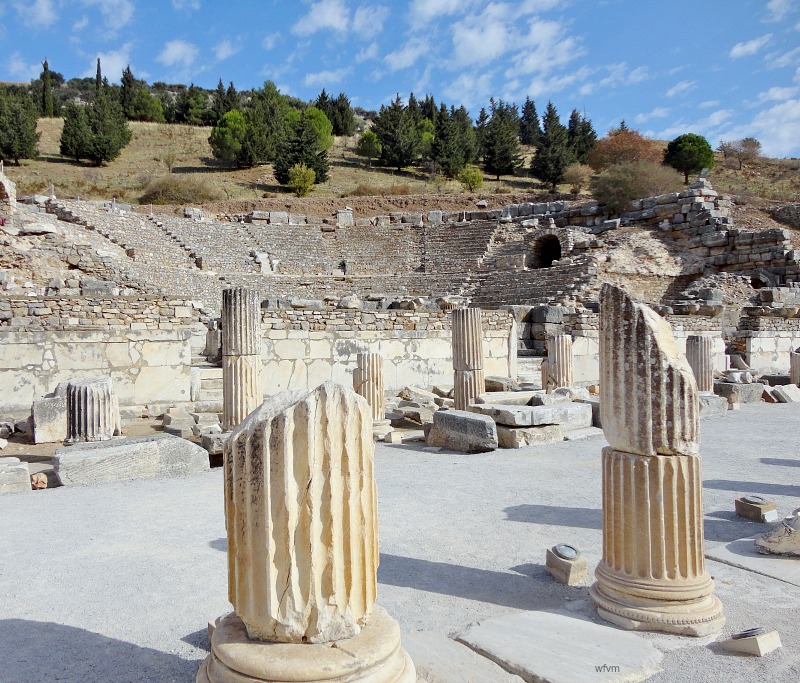 In the background a small theatre - the Odeum which originally had a wooden roof and in the foreground the Basilica, a municipal building where the Congress of Councillors met.
The city was originally thought to have been founded in 1000 BC but excavations carried out in the 1990s now date the original foundations to 3000 BC. 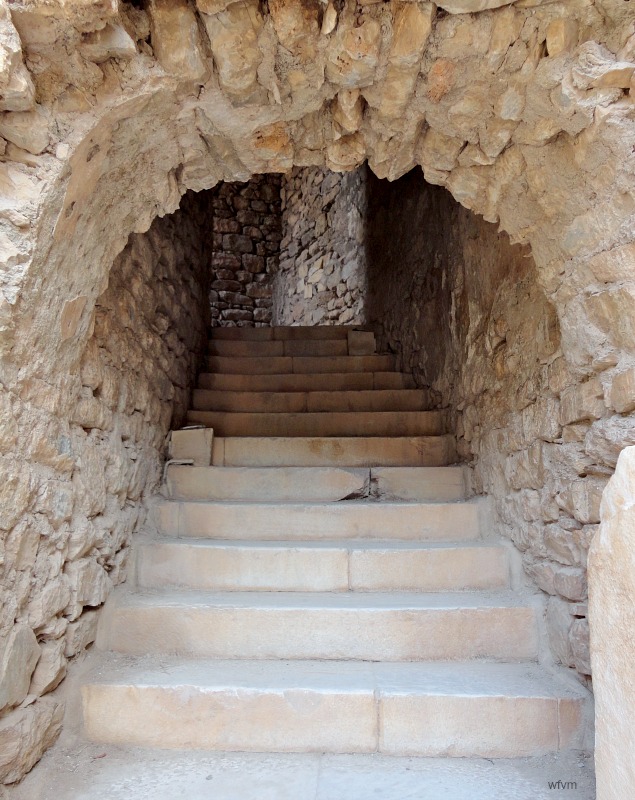 steps leading up to the small Odeum theatre 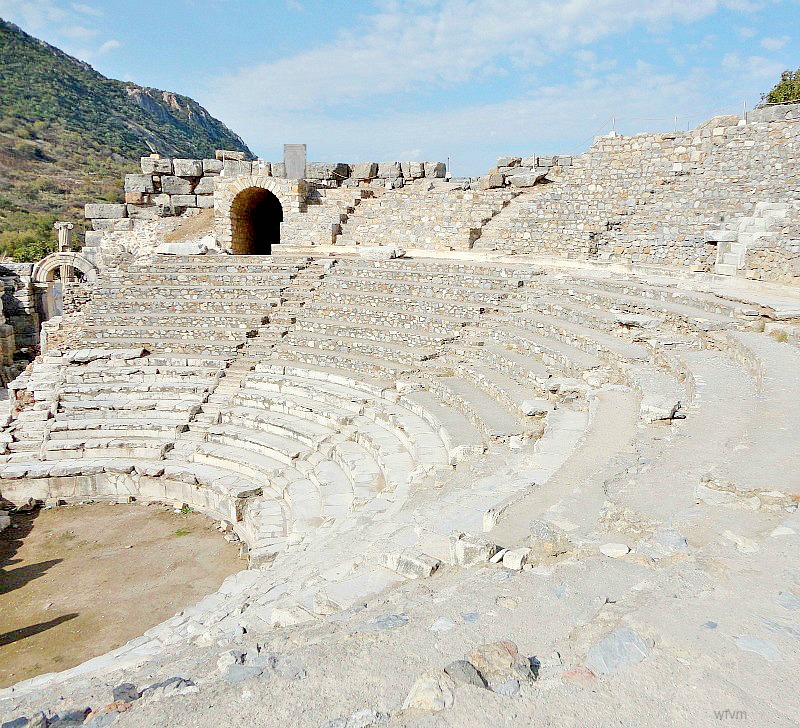 Holding 1500 spectators this small theatre was used for concerts. It was also known as the Bouleuterion - a council chamber for Senate meetings 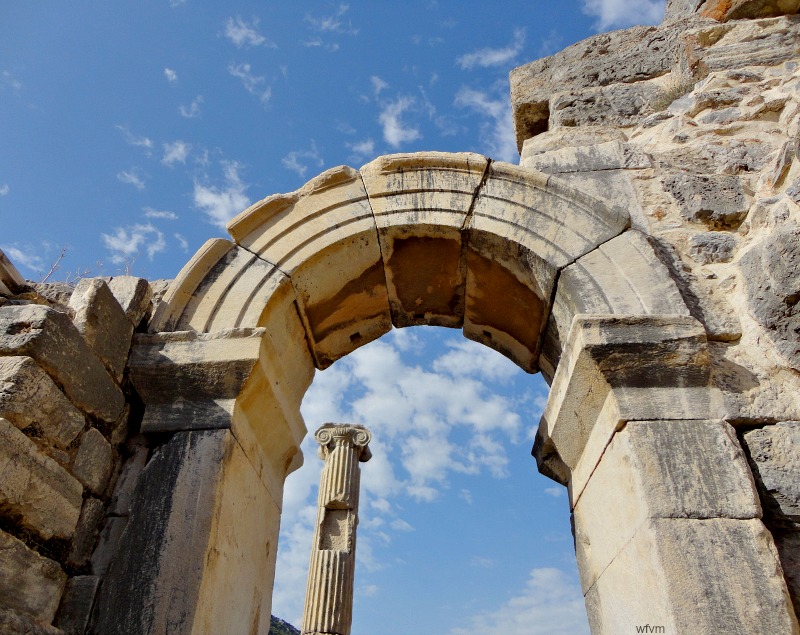 One of the exit arches 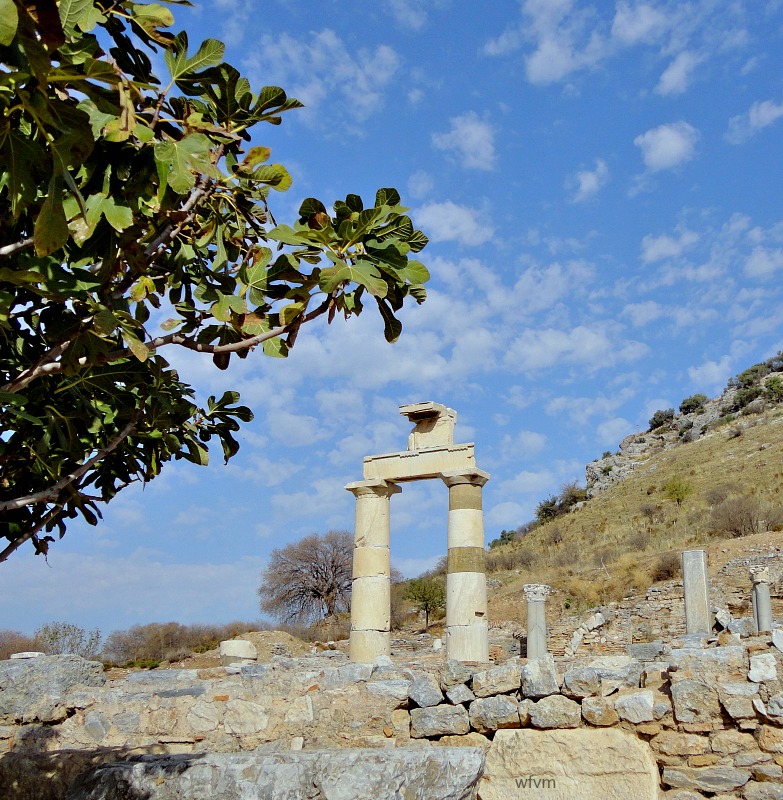 Prytaneum, where religious ceremonies, official receptions and banquets were held. The sacred flame symbolising the heart of Ephesus was constantly alight in the Prytaneum 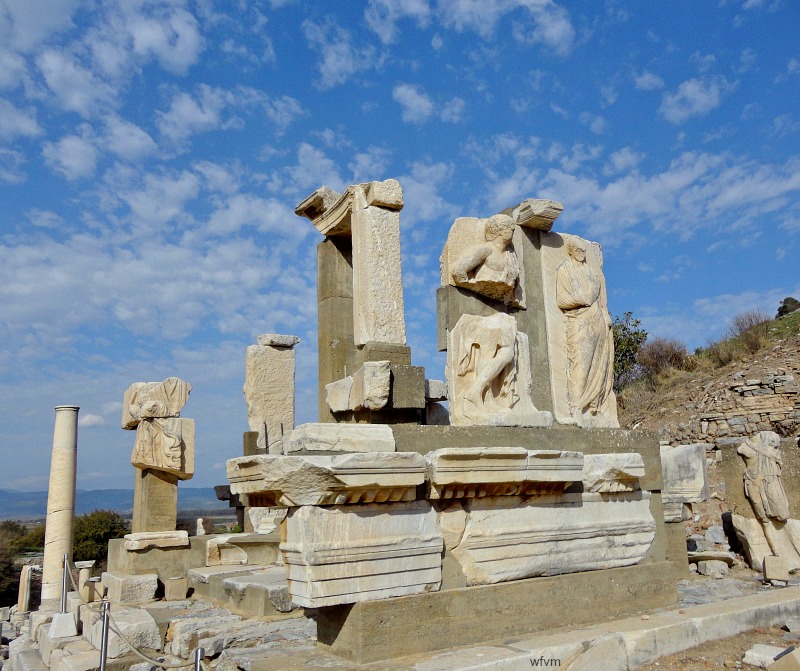 The Monument of Memmius situated on the north side of Domitian Square was constructed during the reign of Augustus in the lst century AD by Memmius, the grandson of dictator Sulla. The figures are his father and grandfather. Dictator Sulla was a hero to the Romans in Ephesus 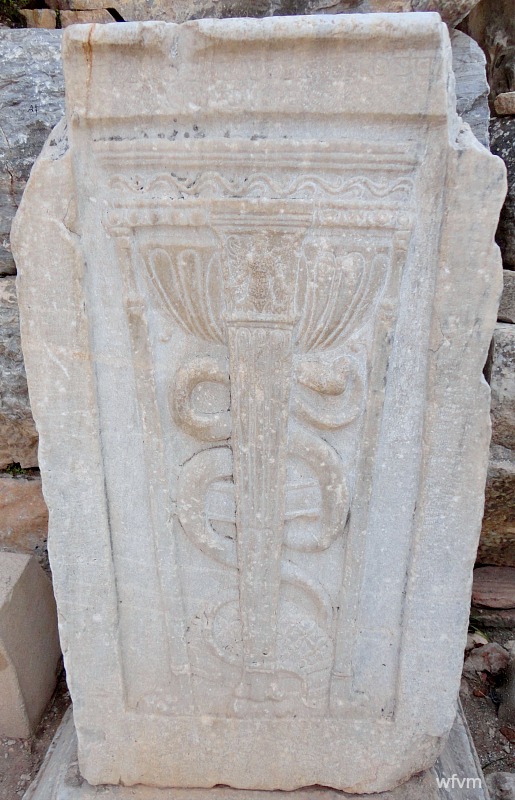 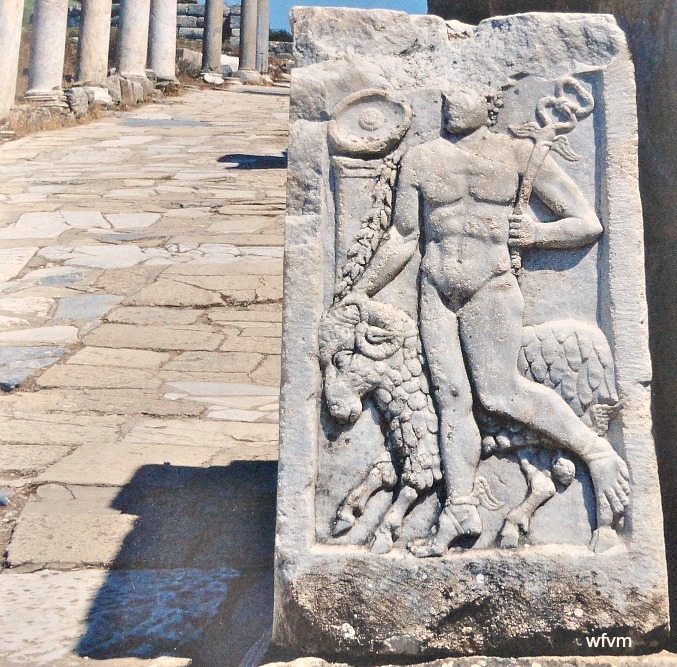 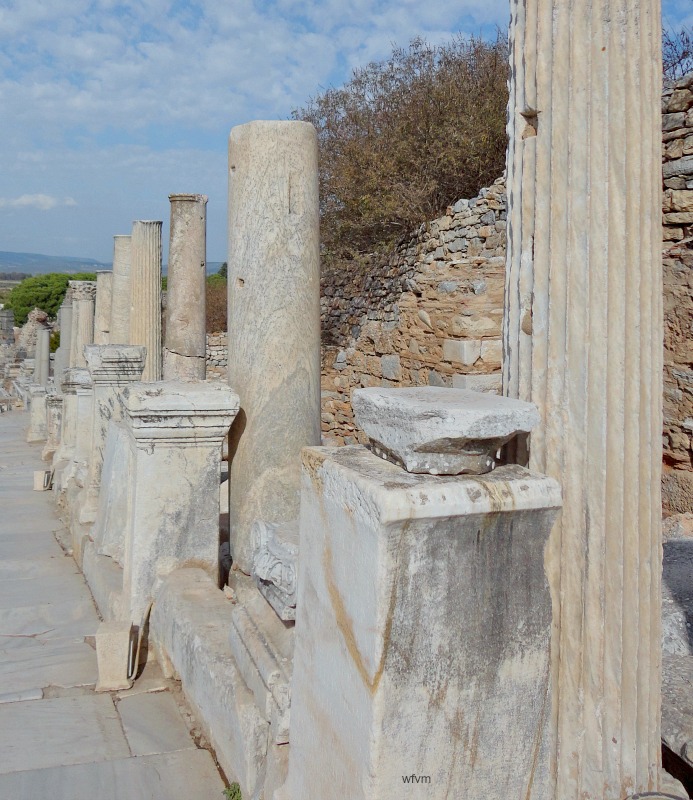 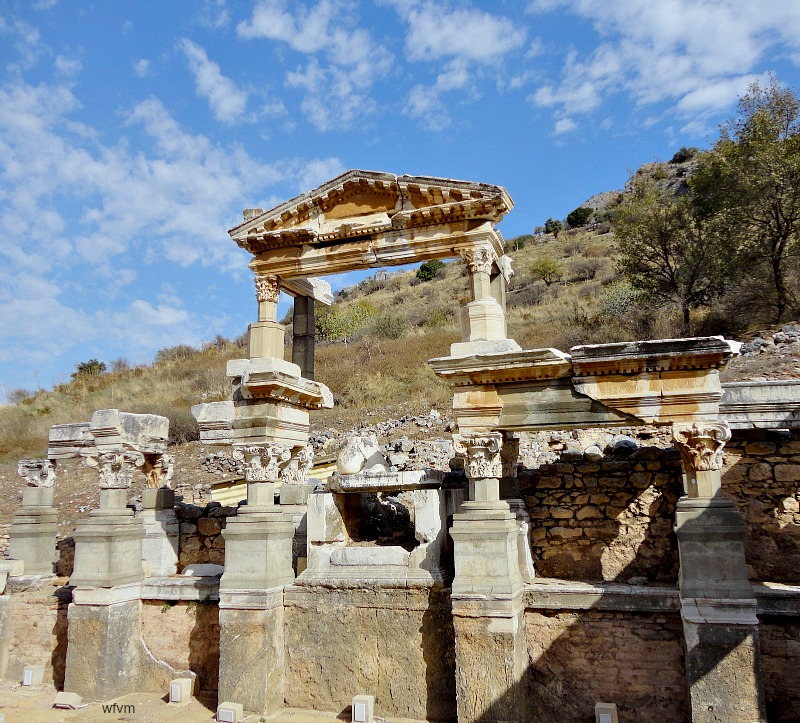 The Fountain of Trajan was constructed in honour of Emperor Trajan. It had a statue of the emperor in the central niche overlooking a pool surrounded by columns and statues. 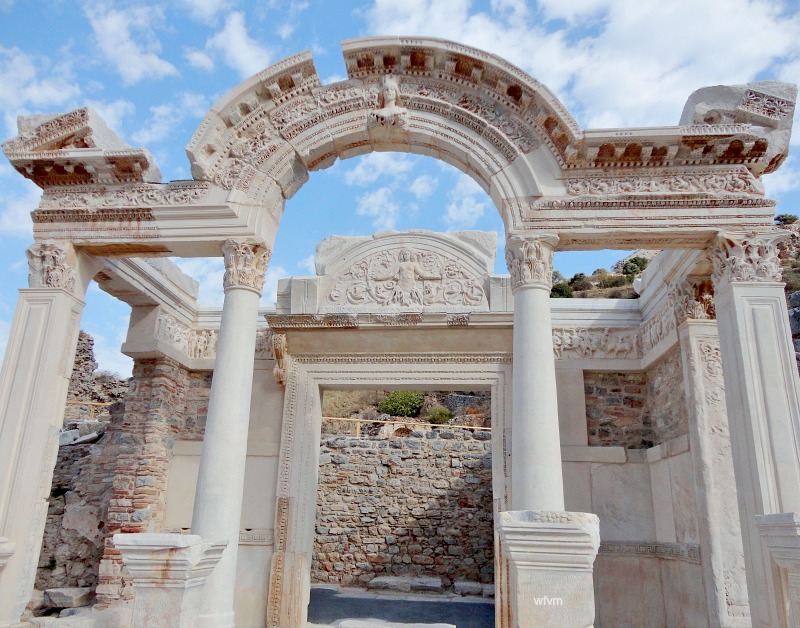 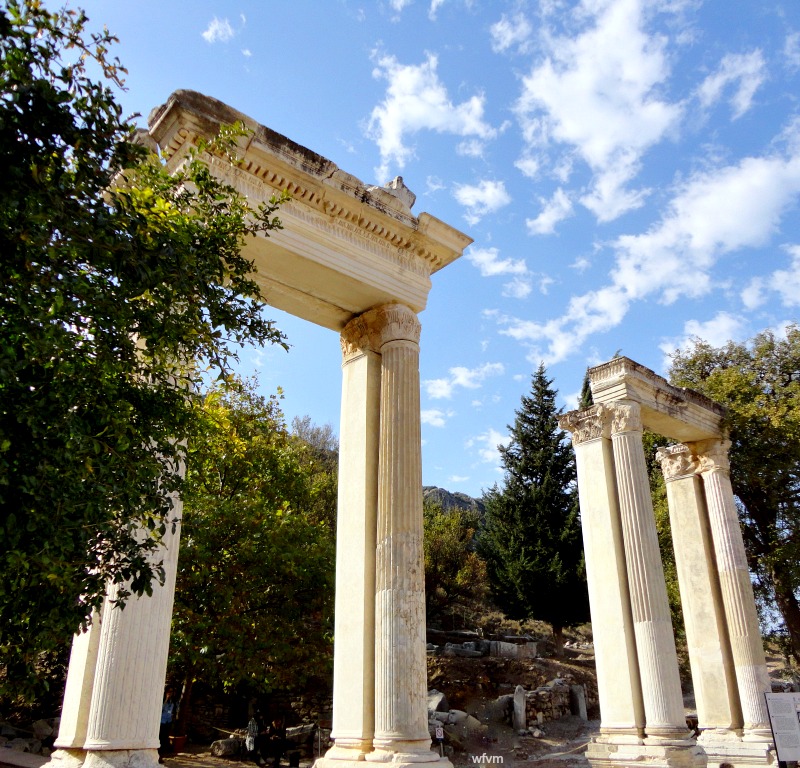 Hadrian's Gate is located at the junction of Curetes Street and Marble Way
650 years ago the ancient city of Ephesus was completely vandalised and its inevitable disappearance began. Over the following centuries it became covered in detritus, rubble, shrubs, scrub land, and brambles. Travellers knew of its existence as it is mentioned in the New Testament, Acts 19:34 - St. Paul was shouted down by a mob chanting "Great is Diana of the Ephesians". A British engineer, John Turtle Wood was designing railway stations for the Smyrna railway in Turkey, and became interested in finding the remains of the Temple of Artemis (also known as the Temple of Diana). In 1863 he relinquished his railway commission and began the search. The British Museum granted him a permit and a small allowance for expenses in return for property rights to any antiquities he might discover at Ephesus. Ever since then Ephesus has been slowly reclaiming its past. 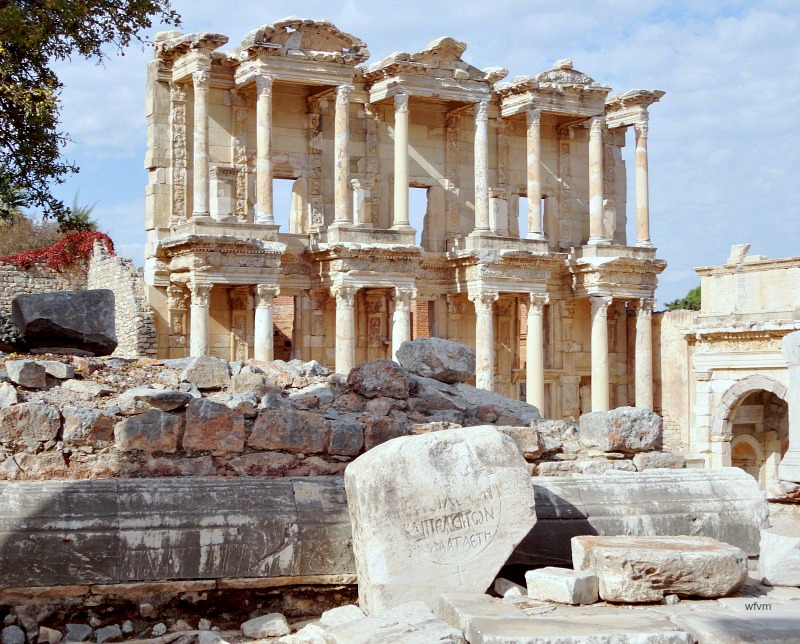 Our arrival at the outstanding Library of Celsus made us gasp with delight. It was built in the 2nd century by the Roman consul, Gaius Iulius Aquila in honour of his father, senator Tiberius Iulius Celsus Polemaeanus. The library used an ingenious method of humidity control - it had air channels running behind the niches in which precious rolled manuscripts were stored. The correct interpretation of the library is a 'heroon' as it was built over the burial chamber of the deceased father. 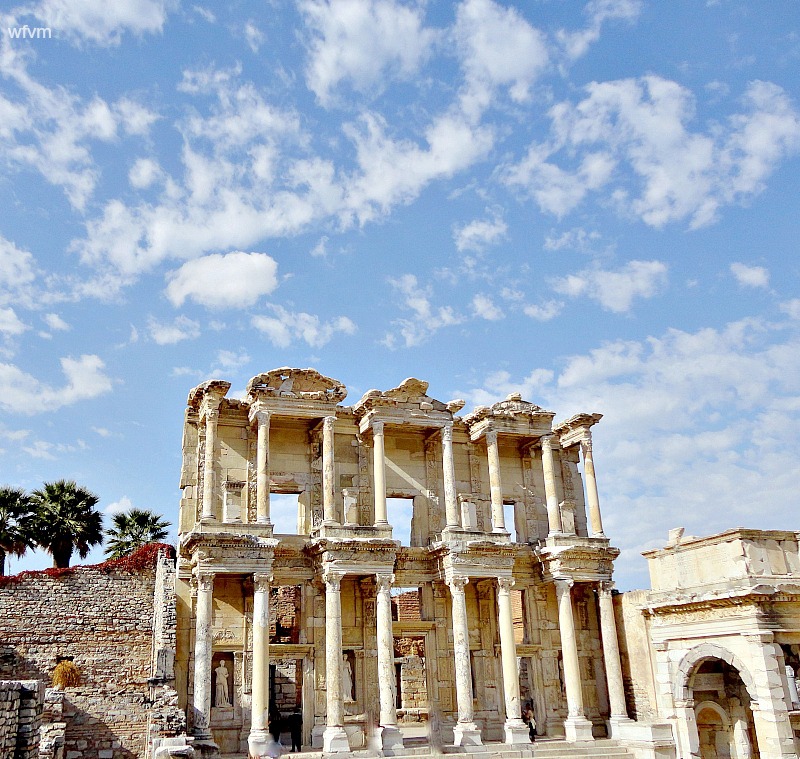 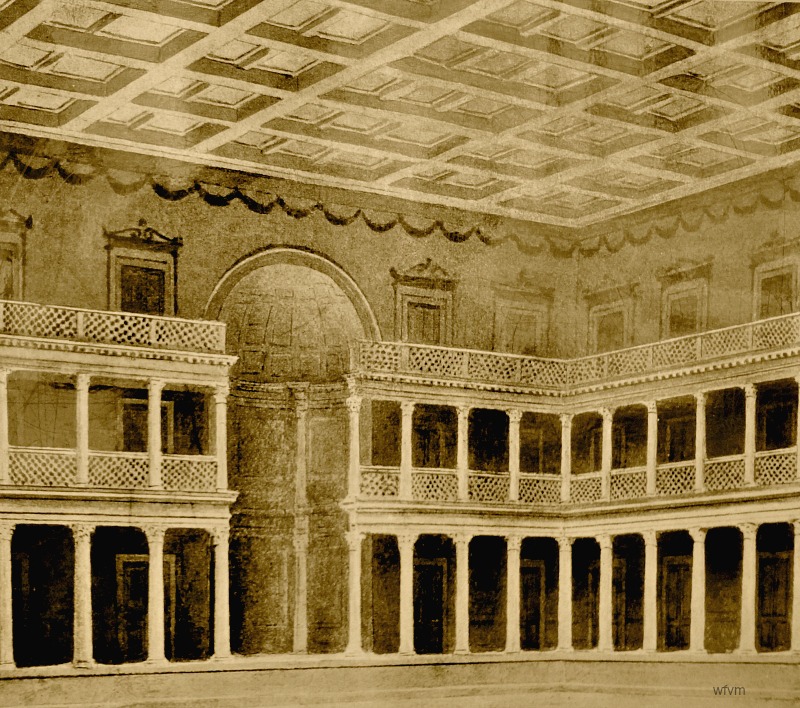 Artists impression of the interior of the library 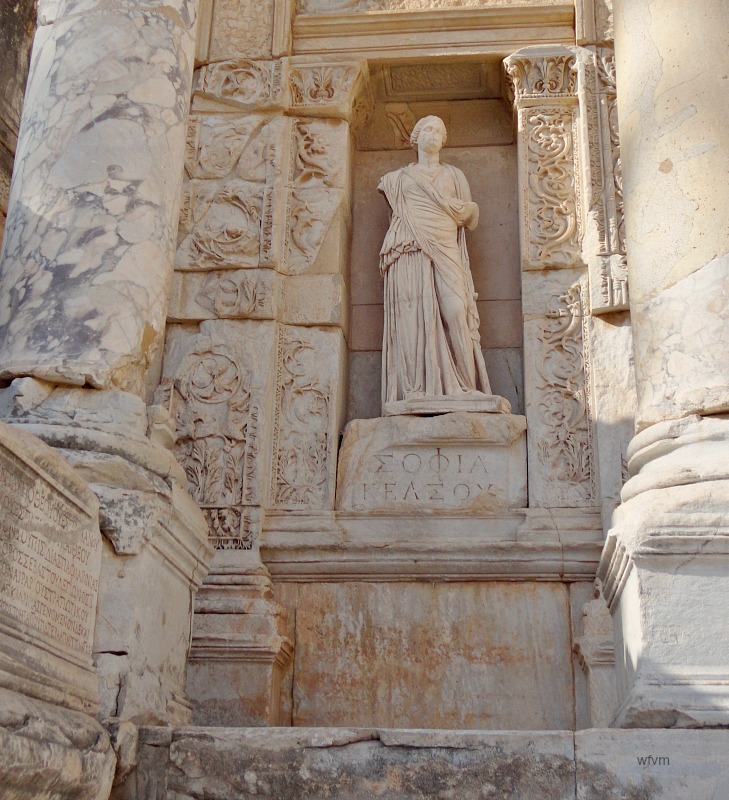 Wisdom (Sophia)
This close up photo reveals the libraries monumental scale
The statues in the niches symbolise Wisdom, Knowledge, Intelligence and Virtue. They are copies of the originals which can now be seen in the Ephesus Museum, Vienna 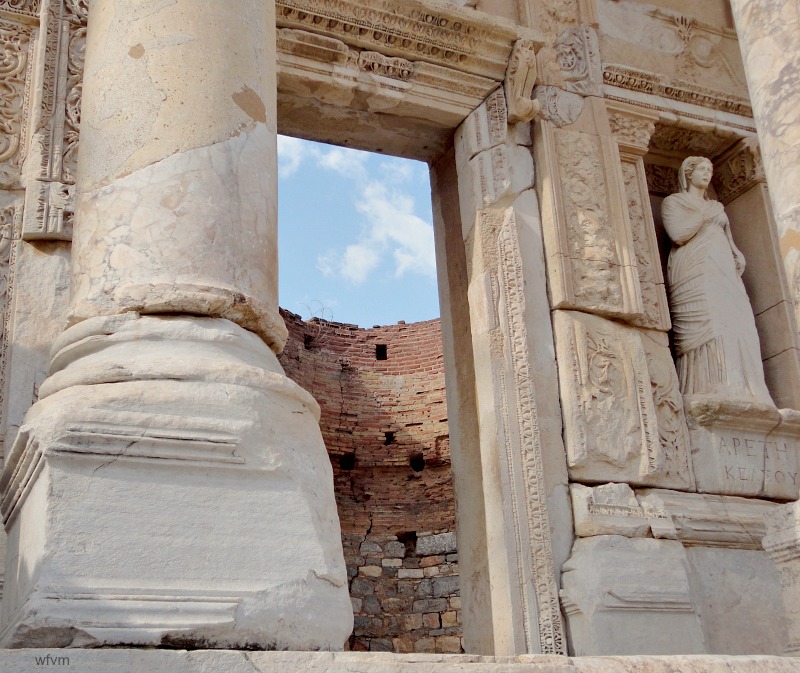 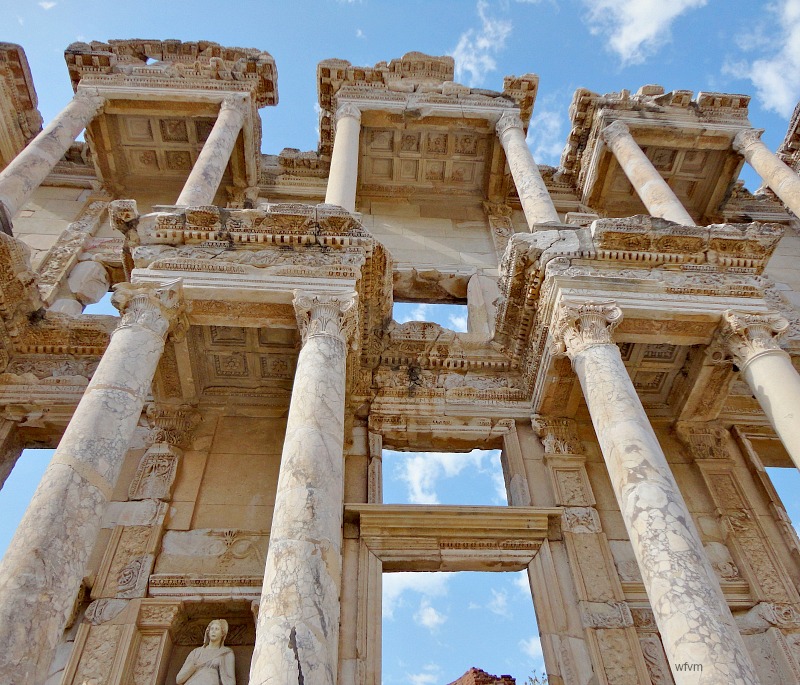 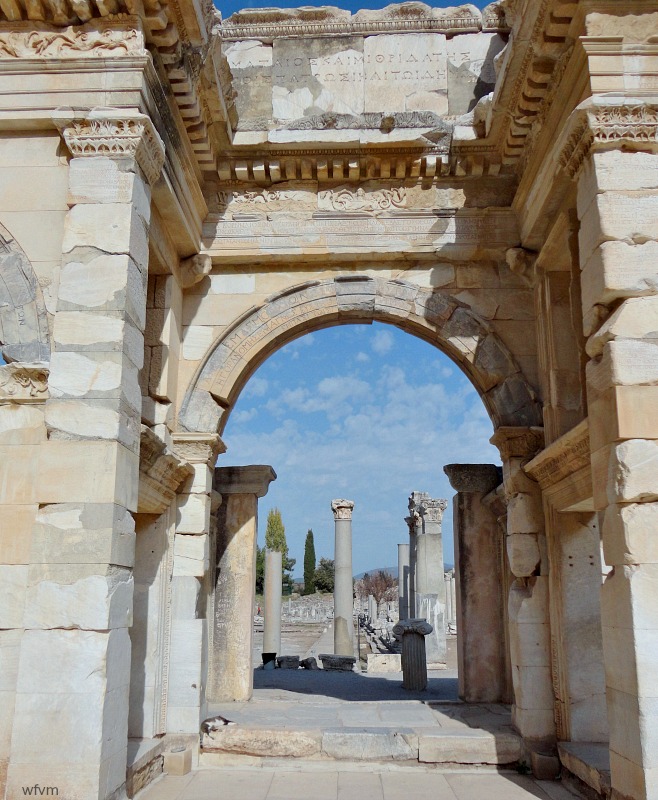 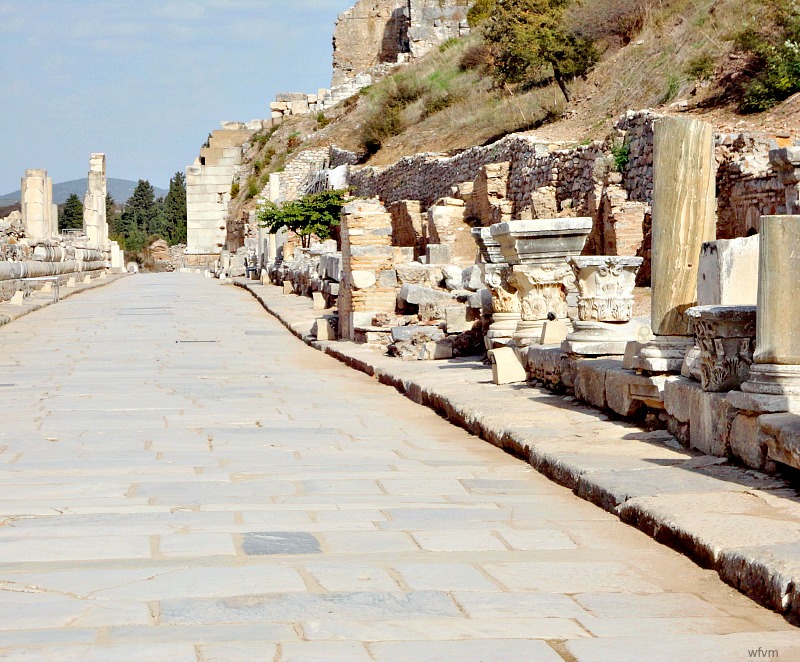 A walk along Marble Way 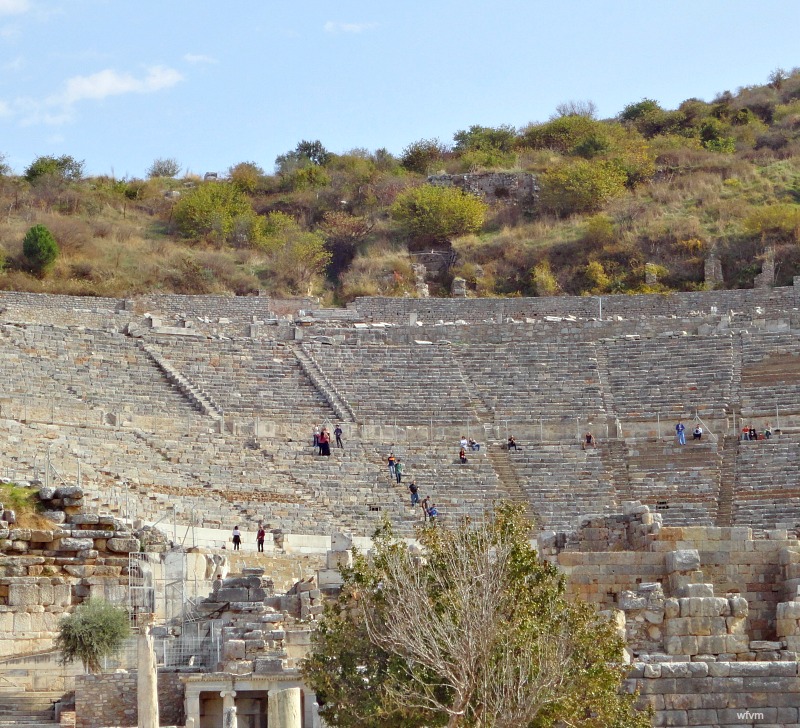 to the Great Theatre located on the slopes of Panayir Hill. It has a seating capacity for 25,000 people and is the largest theatre in the Anatolian region. Originally constructed during the Hellenistic period in third century BC it was enlarged to its current size by the Romans

It is difficult to convey the scale of the Great Theatre, but this photo must represent about one third 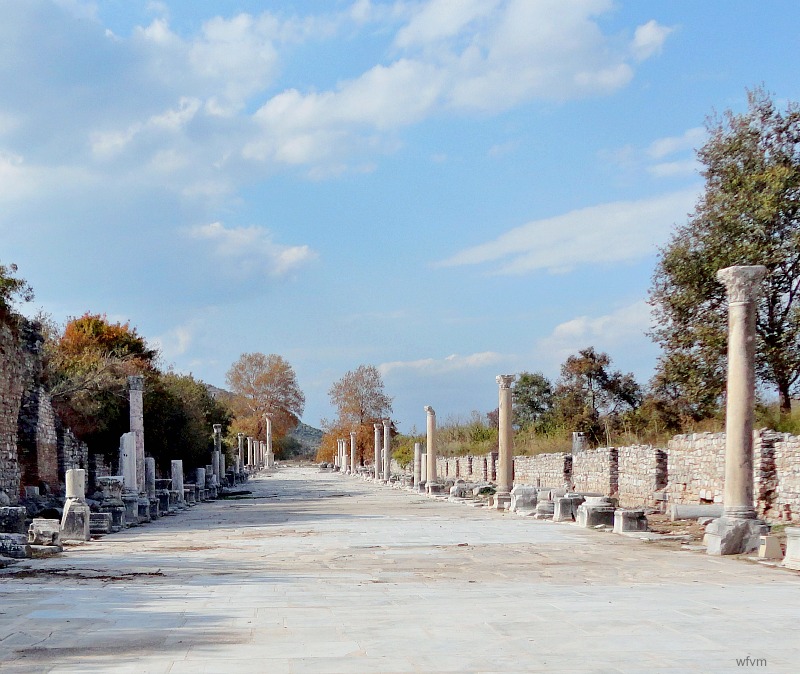 Arcadian Street led down to the harbour. Entering from the port, all traders and sailors would first arrive in this street. Constructed in the Hellenistic period it was restored during the reign of Emperor Arcadius. On both sides of the street were shops and galleries. I read that it was one of only three lighted streets at that time, the other two being in Rome and Antioch. I am presuming that it was lit by flaming torches. There were water sewerage channels running beneath the marble flagstones down to the sea. 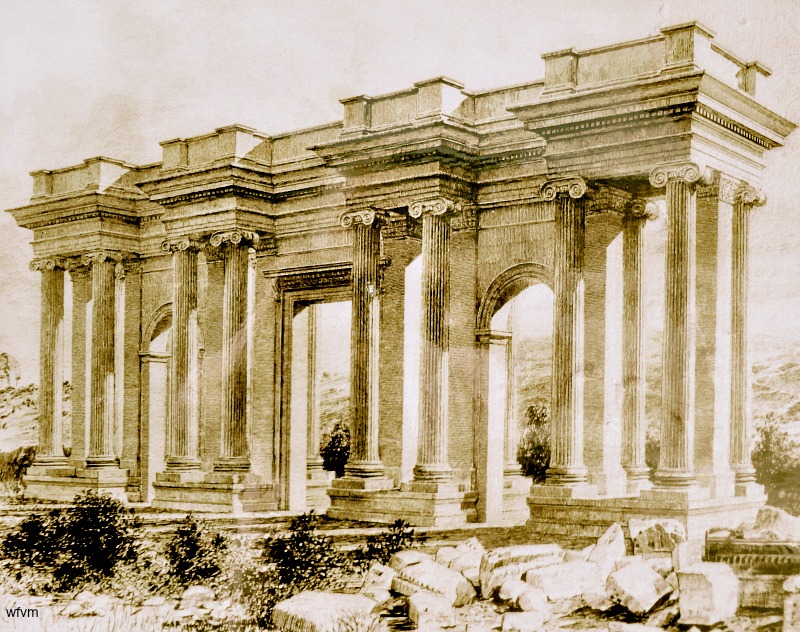 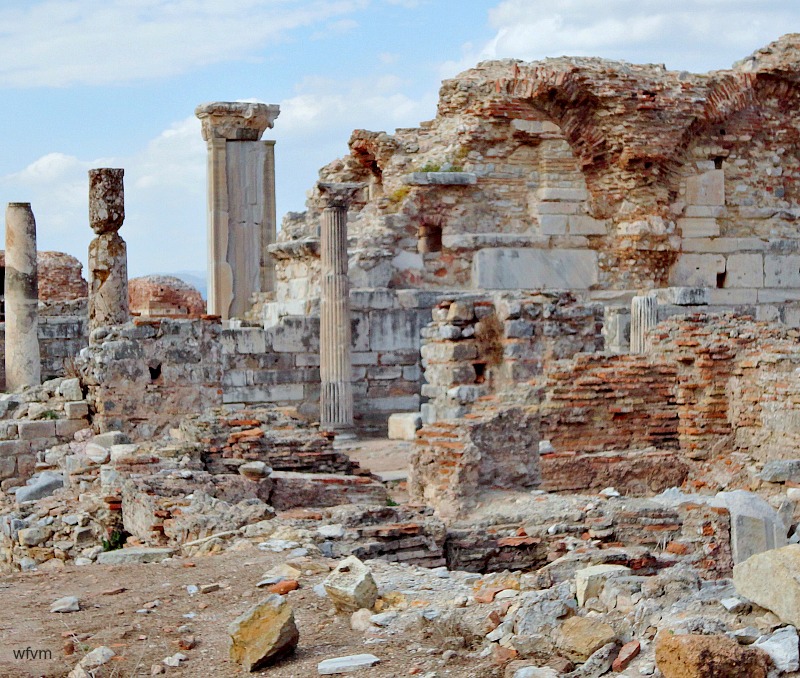 As our walk through Ephesus draws to its close we pass the remains of the house of the Virgin Mary.  A typical Roman example of architecture which is said to combine her house and grave. It is known that she came to the area with St. John who spend several years spreading the word of Christianity. It is where they both ended their days and is a place of pilgrimage, not only for Christians, but for Muslims too. Muslims recognise Mary as the mother of one of their prophets
*******************
A Brief Time line
Early Ephesus 6000 BC - 334 BC
Hellenistic Ephesus 3rd - lst century BC
Roman Ephesus 133 BC - 2nd century AD
The city was destroyed by Goths in 263 AD
Byzantine Ephesus Emperor Constantine l rebuilt the city 4th - 14th century AD
In 1403 Ephesus was completely ruined by
Timer-Leng, a member of the Turkish Barlas Tribe (descendants of Genghis Khan and the Mongol Empire)
Posted by Rosemary at 09:37