The Story of my Tobacco Jar 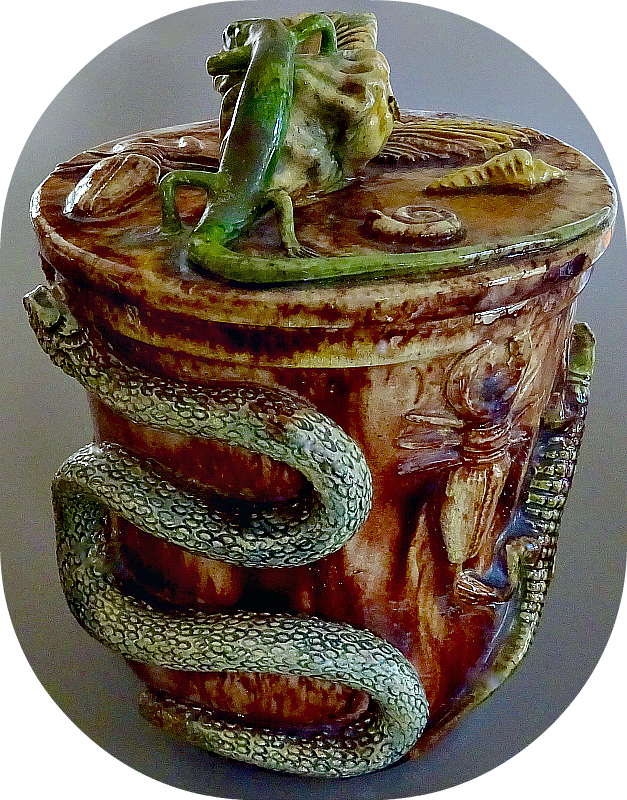 This Majolica Palissyware Tobacco Jar is 150 years old - it was made in Mafra, Portugal, by Manuel Cipriano Gomes 1829 - 1905 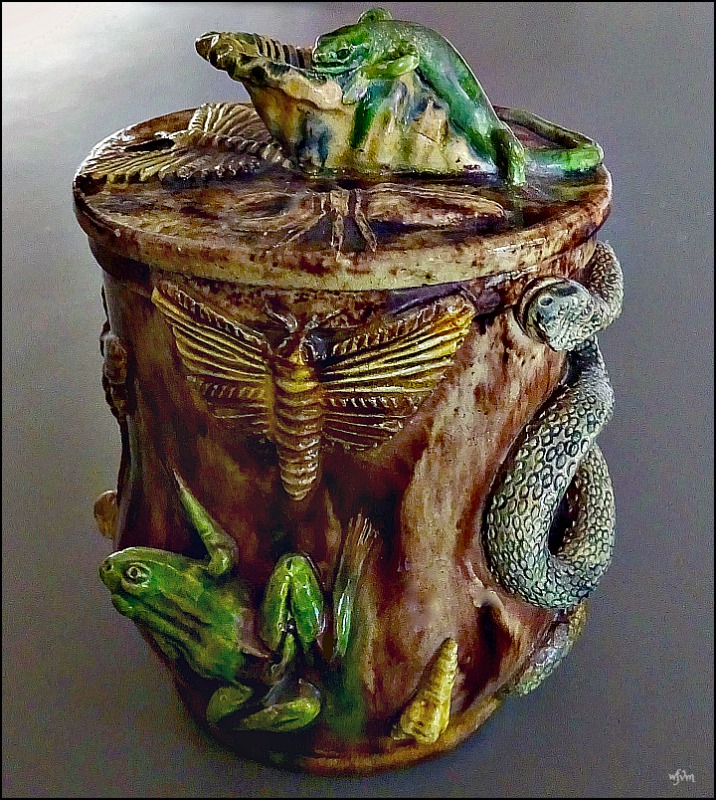 Some people love this object others hate it,
but this is it's story.
Five members of the famous Darwin family are mentioned here so in order to differentiate between them I have used contrasting colours for their names.
*****

The tobacco jar, which is now in my possession, was inherited by my paternal grandmother from her childless aunt. Her aunt married a member of the Darwin family called Francis Darwin Huish. His grandfather was Sir Francis Sacheverel Darwin, who was one of Erasmus Darwin's sons from his second marriage to Elizabeth Pole. Erasmus Darwin (Fellow of the Royal Society) was the eminent physician/all round scientist, poet, and a founding member of the Lunar Society. One of Erasmus Darwin's sons from his first marriage to Mary Howard was Robert, who was the father of Charles Darwin. Sir Francis Sacheverel Darwin was therefore uncle to Charles Darwin.
From things that my grandmother said over the years, the jar became known as the Charles Darwin tobacco jar. However, I now question that supposition as without any firm evidence or proof what she said means nothing at all. I am of the opinion that the owner of the jar may have been Sir Francis Sacheverel Darwin, Francis Darwin Huish's grandfather. I have no proof of this, but even so, his story is an interesting one.
Sir Francis was Erasmus Darwin and Elizabeth’s most unruly, wild child. He went to Emanuel College, Cambridge and became a doctor. After Cambridge, in 1808, he embarked on an adventurous two year journey via Spain to Greece and Turkey. He set off on his travels with four other companions, all of whom died on the journey. In his diary Sir Francis Sacheverel Darwin tells his story as if it were quite normal to spend a small fortune on almost suicidal voyages and expeditions, interrupted by fatal and near fatal illnesses, in a war zone where every ship sighted was a threat from robbers and privateers. He loved adventure for its own sake, but was also a born naturalist. His pencil followed a keen eye, where rock and mineral, plant and beast were concerned as readily as when it portrayed an archaeological site or displayed the costumes he saw in Greece and Turkey. Arriving in Smyrna at the height of the Plague gave him the opportunity to watch the progress of the disorder in several English sailors who had been on shore. He visited the local Armenian and Greek hospitals, where numbers were dying daily. At a later date, Sir Francis, wanting more experience of the Plague took charge of several Smyrna hospitals.
When Sir Francis returned home he practised as a doctor in Lichfield where his father Erasmus had also been in practice. He married and had 10 children, and was knighted in 1820 by George lV. He loved country life so much that when he was 36 years old he decided to give up working as a doctor and went to live at Sydnope Hall situated in a remote area of north Derbyshire where he lived for 25 years. His home was full of animal oddities including tame snakes, and he kept what is known as a sounder of wild Boars in his wood. Before he died, he moved to Breadsall Priory, near Derby, which had been the home that had once belonged to his father, Erasmus Darwin.

Sir Francis Sacheverel Darwin's early intrepid travels, his short time practising as a doctor, and then his retirement to Sydnope Hall surrounded by his menagerie of strange animals must surely have made him a 'Darwin family character', but I wonder what Charles Darwin thought of his uncle? I do, however, have two clues. The first was found in a letter written by Charles Darwin, which is held in the Cambridge University Darwin Correspondence Project. In the letter Charles Darwin writes to W.D. Fox who was his second cousin and also a fellow student at Cambridge regarding a visit that they had both made to Sir Francis’s home at Sydnope Hall in Derbyshire.
Letter extract from Charles Darwin to W.D. Fox:-
"Secondly I have been struck with surprise in comparing my memoranda how often crossed animals are said to be very wild, even wilder than either parent: I have thought I would just put a foot-note to this effect, giving my cases: my memory, which I dare not trust, tells me that the cross from wild Boar and common pig at Sydnope Hall was wilder than the wild Boar: do you remember anything of this? I refer to our, very memorable visit to Sydnope Hall".
The second clue was seen whilst visiting Charles Darwin's home, Down House in Kent, where we saw an oil painting of Sir Francis Sacheverel Darwin hanging on his dining room wall alongside other celebrated Darwin family members.
Posted by Rosemary at 11:50