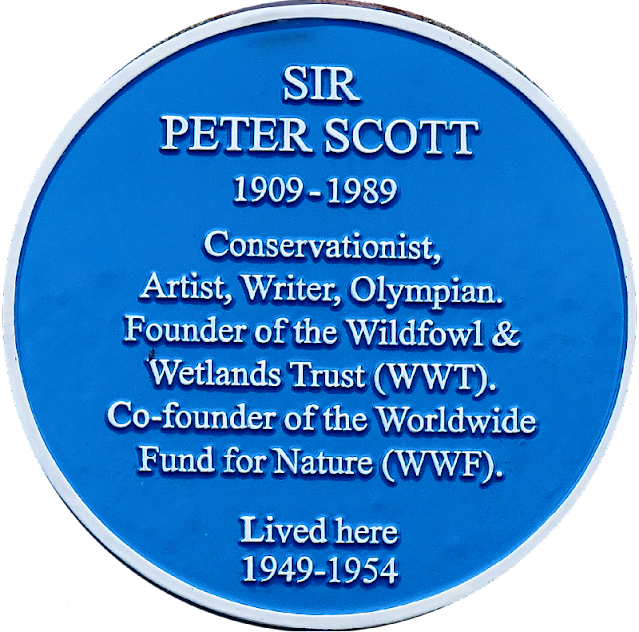 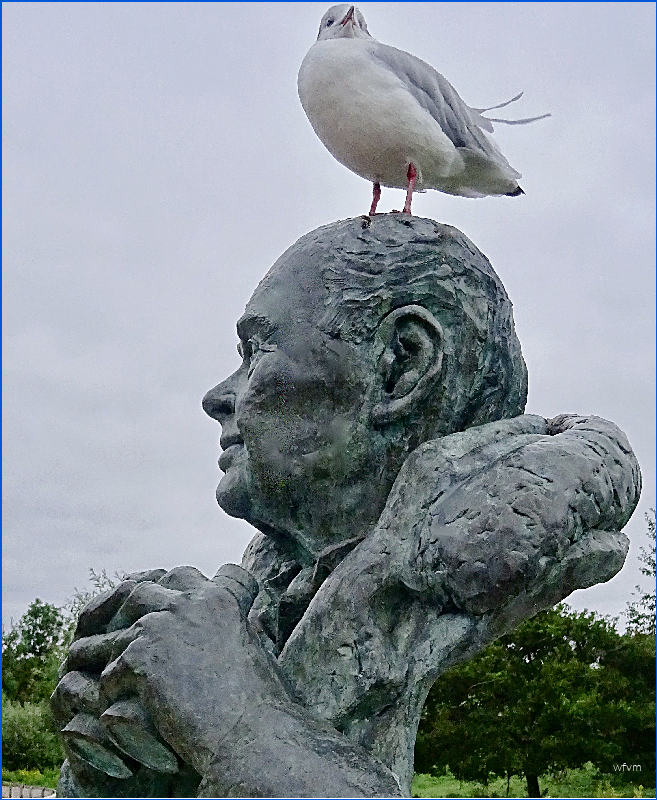 Early in the morning the following day we visited Slimbridge WWT founded by Sir Peter Scott, only child of Antartic explorer Robert Falcon Scott.
My husband met Peter Scott in the 1970s. They were both attending a conference in Jeddah, Saudia Arabia, drawing up a convention for the protection of the Red Sea. Scott was representing the International Union for Conservation of Nature, and they shared a car and driver for the duration. In every spare moment Scott worked in his sketchbook recording the beautiful fishes and birds that he saw whilst visiting the different locations. The Saudi hosts were fascinated, as was my husband. He was a very modest and unassuming character and fun to be with. 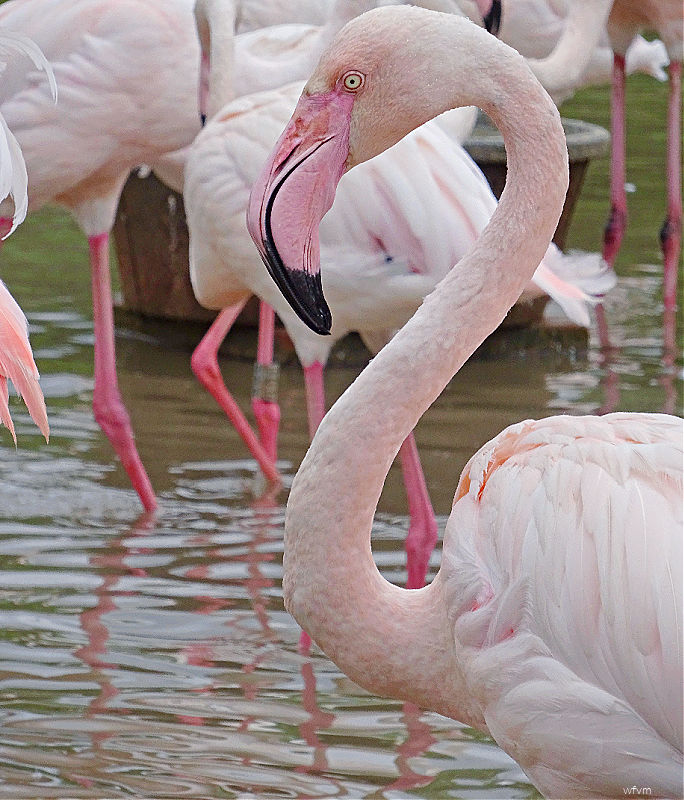 Greater Flamingo - Phoenicopterus roseus is the largest of all the flamingo family. It is found in Africa, India, the Middle East, and Southern Europe. When we drove through the Camargue several years ago we saw a large flock of these flamingos. When they took to the air, I remember thinking how much they resembled Dyson vacum cleaners!
There are six different species of Flamingo at Slimbridge. 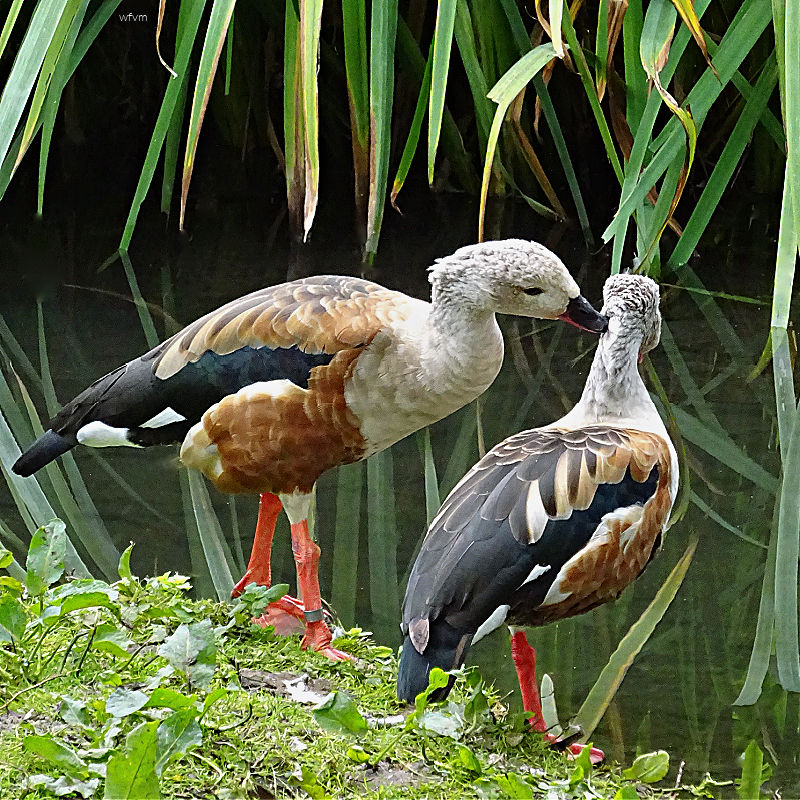 A pair of Orinoco Geese from S. America. I assumed that this was a couple of males preening one another, but in fact these geese are momomorphic - the males and the females look the same. 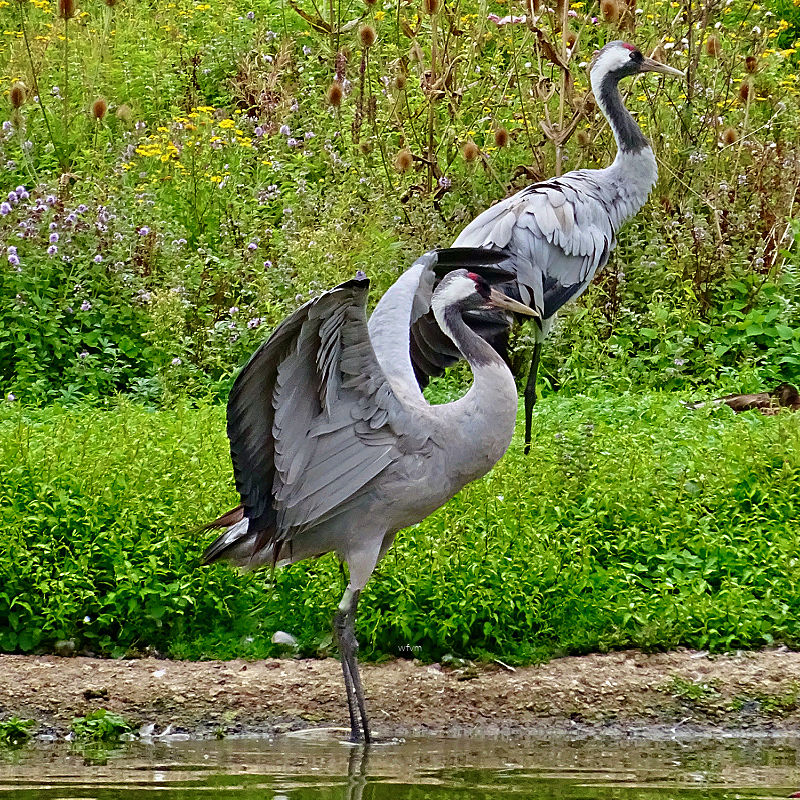 Cranes - Grus grus
Cranes were wide spread in the Uk upto 1600 but they were sadly driven into extinction through wetland damage and hunting for food. Now, happily, they are a great success story. Flocks of them can now be found breeding across several areas of the country including N.E Scotland.
⭑⭑⭑⭑⭑⭑⭑⭑⭑⭑⭑⭑⭑⭑⭑
If you would like to read the start of a success story from Slimbridge regarding the small Spoon-billed Sandpiper please read here. I wrote about its threatened demise 9 years ago.
⭑⭑⭑⭑⭑⭑⭑⭑⭑⭑⭑⭑⭑⭑⭑ 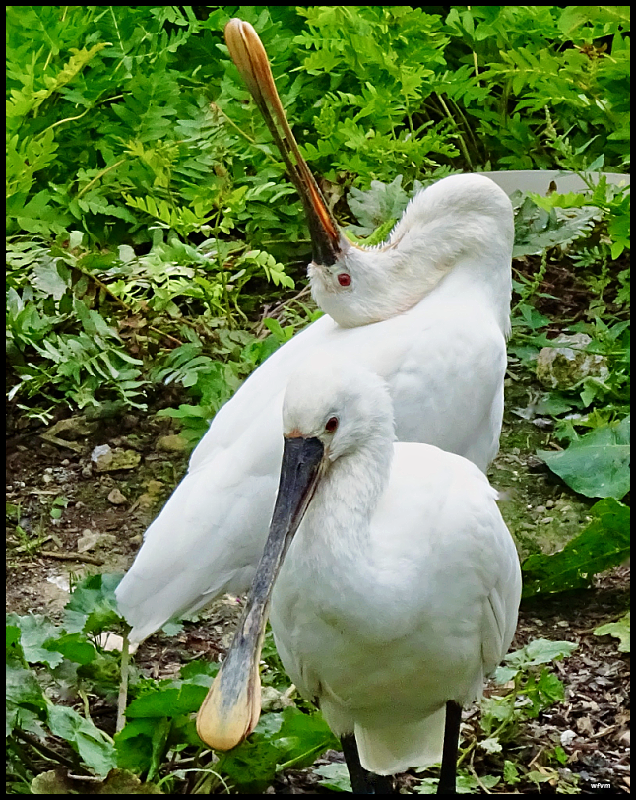 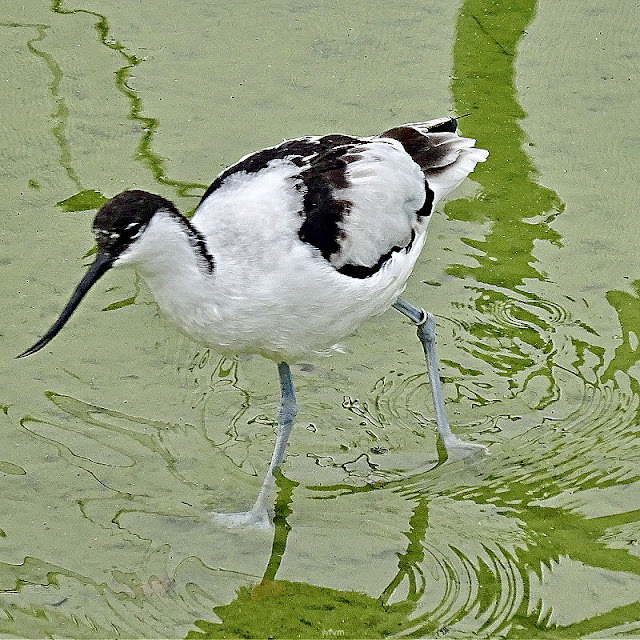 Avocet - Recurvirostra avosetta
The number of birds to be seen at Slimbridge could fill a book. The previous post began with our own familiar British Mute Swan, so I will conclude with a glide pass of four other species of swan. There are only 7 species of swan and the two I have left out are Whopper swans, who have yet to arrive for the winter at Slimbridge, and the Trumpeter swan from North America. 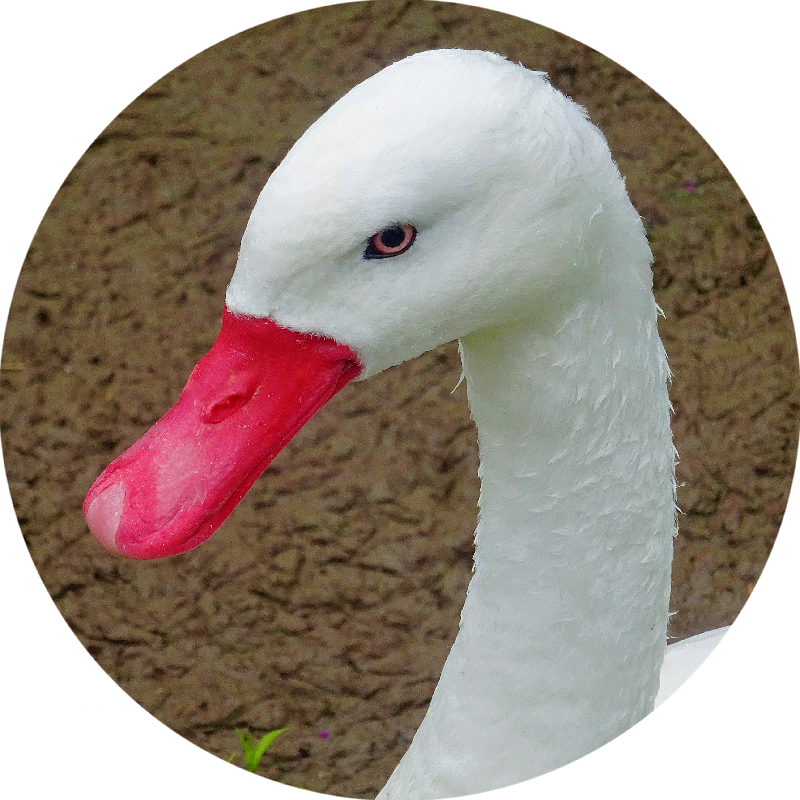 Coscoroba Swan - Coscoroba coscoroba
This swan comes from South America. It is the smallest swan in the world and is often mistaken for a goose with its short neck and waxy red duck bill. 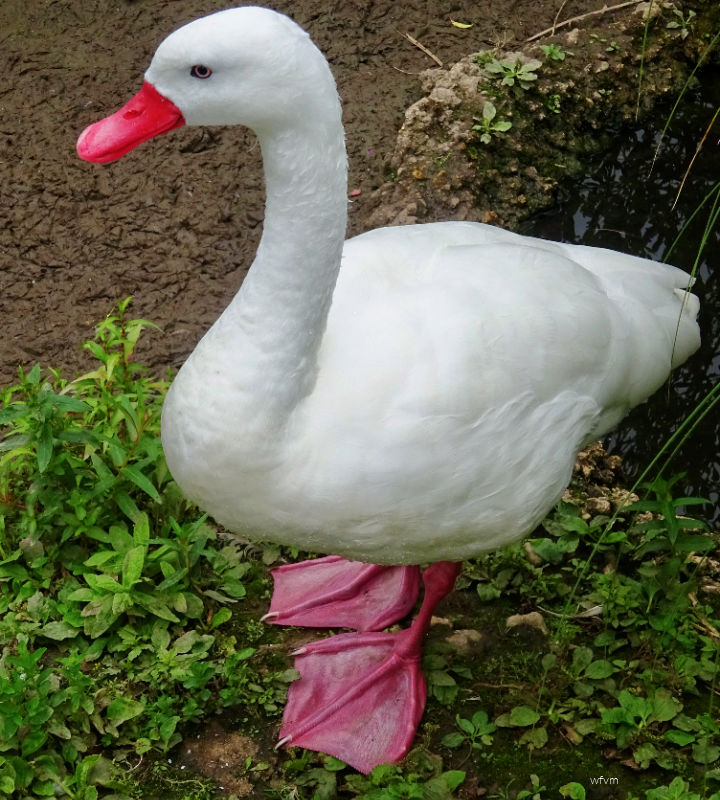 This swan is really cute with its red bill and matching pair of red legs and feet. 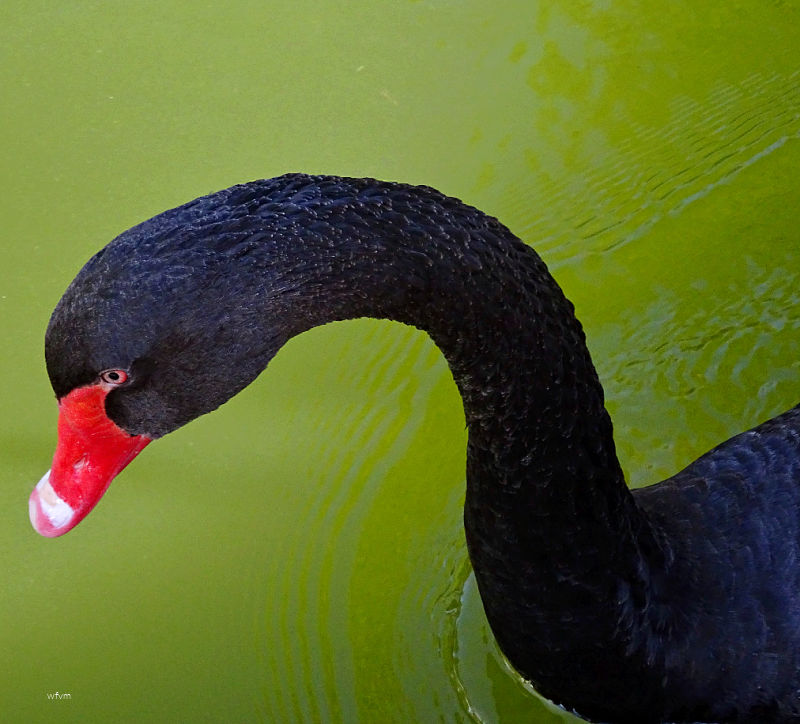 The Black Swan - Cygnus atratus is a large swan which breeds mainly in the SE & SW regions of Australia. With its black, almost velvet like plumage, red bill with a pale bar and tip, greyish/black legs and feet it is a handsome bird. 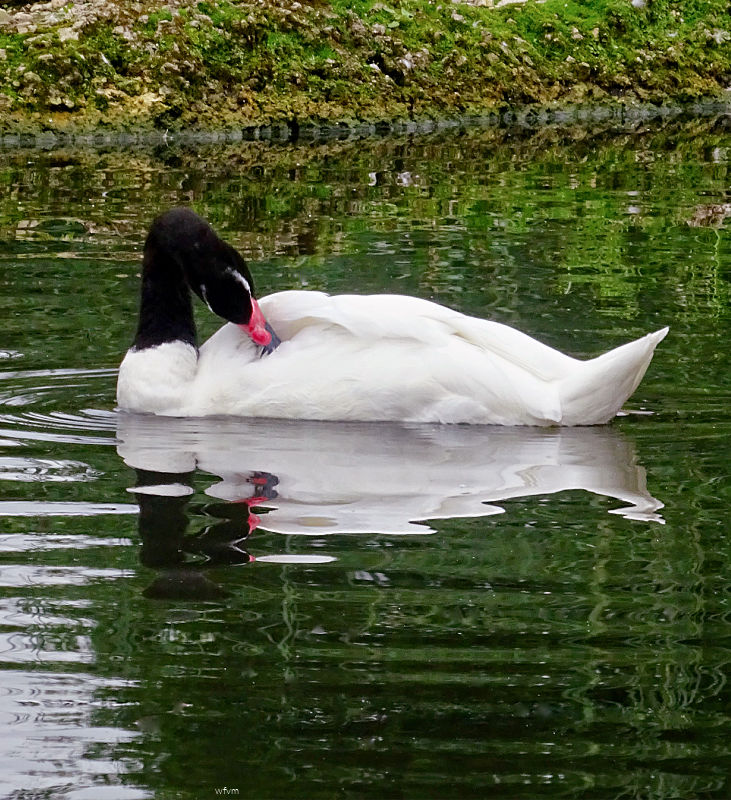 The Black Neck Swan - Cygnus melancoryphus is the largest native waterfowl in S. America. It has a large red knob at the base of the bill and white stripes running behind the eyes. My husband saw a group of these in a lagoon in Tierra del Fuego alongside a flock of Chilean Flamingos. They were in a dramatic snowy landscape with a backdrop of the Andes - a sight that he will never forget. 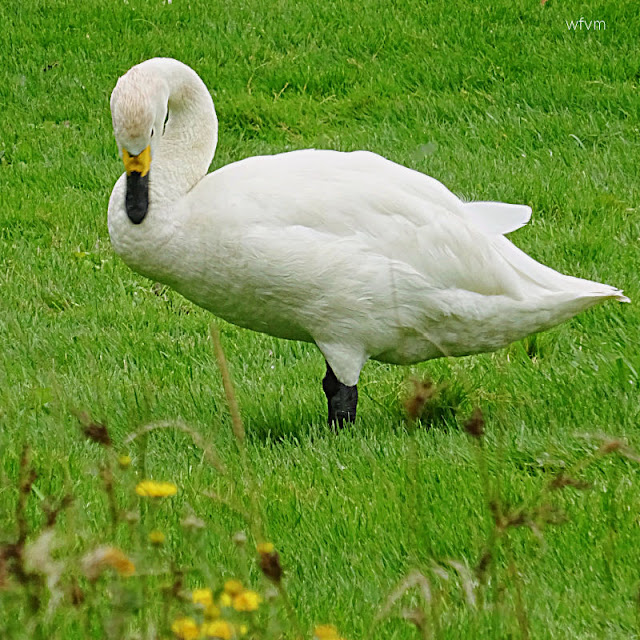 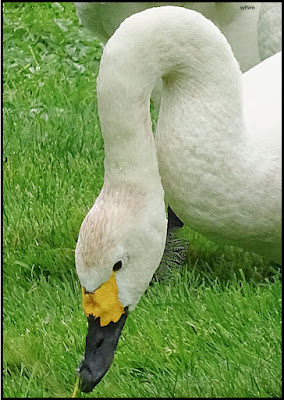 Two species of swan come to the UK each winter: whooper swans migrate from Iceland and Bewick's swans make the journey from Siberia. They both have yellow and black bills and can be difficult to separate. Bewick's swans have more black on their yellow-and-black bill than the Whooper swans, and are the smallest swan species to visit the UK.
Every autumn, Bewick’s swans face a dangerous migration to the UK from northern Russia. Along their 3,500km route between the breeding and wintering sites there are predators, fewer wetlands and the risk of hitting power lines, but if they don’t migrate, they will be caught in the ice and snow of an arctic winter. In spring, they do it all again when they fly back to Russia. It is of great concern that the rapidly changing climate of the Arctic will affect them. Hopefully by late October early November at least 200 Bewick's Swans will have arrived back at Slimbridge for the winter. 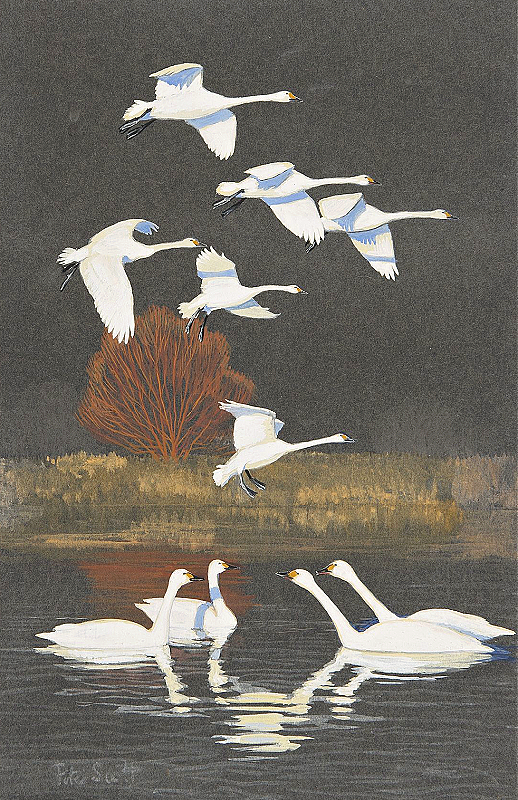 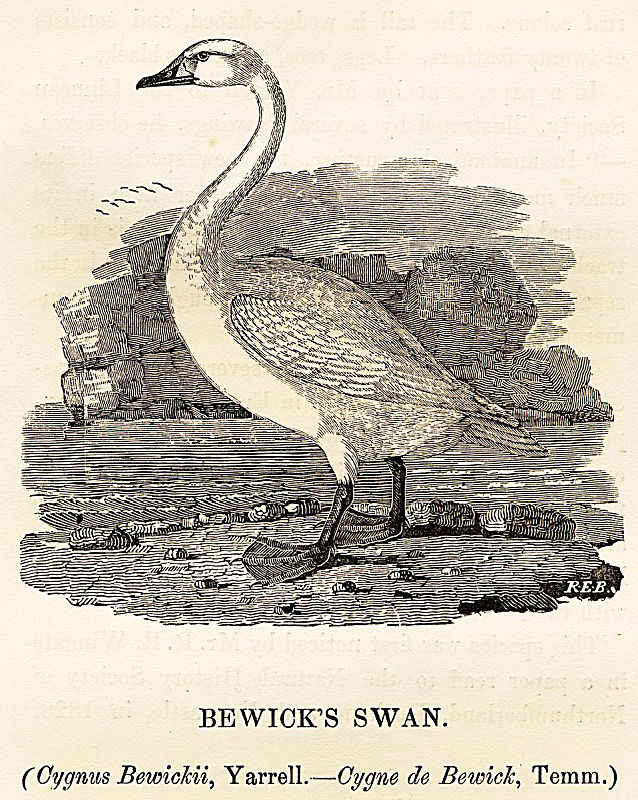 This engraving of a Bewick's Swan was done by his son Robert Elliot Bewick in honour of his father.
Posted by Rosemary at 09:20